3D Touch on the iPhone 6s: Everything You Need to Know

During Apple’s September 9 iPhone event, the company announced “the next generation of Multi-Touch”: 3D Touch. The feature is a next-generation version of the pressure-sensitive Force Touch feature that Apple introduced with the Apple Watch and then incorporated into the trackpads of its latest MacBooks.

3D Touch is able not only to sense familiar gestures like taps, swipes, and pinches, but also to determine the depth of a press. That enables new gestures — ones which Apple calls Peek and Pop — that give you a new way of interacting with your iPhone and the apps on it.

The way you’ll use 3D Touch is pretty simple, but as Apple’s website explains, the technology behind the feature is pretty advanced. When you press the display, capacitive sensors measure “microscopic changes in the distance between the cover glass and the backlight.” The operating system uses those measurements to respond to the pressure you’re exerting, and even provides responsive feedback with “subtle taps” created by the new-to-iPhone Taptic Engine.

Owen Williams reports for The Next Web that 3D Touch offers a compelling alternative to the hamburger button and the associated menu. Force Touch enabled Apple to avoid the hamburger menu on the tiny screen of the Apple Watch, and with 3D Touch, Apple is making the first move toward eradicating it on the iPhone, too. The hamburger button often hides options when developers and designers don’t know where else to put options, but 3D Touch hides them behind what Williams characterizes as a “consistent, memorable gesture.” That makes them easy to access, while keeping the user interface simple and streamlined.

While the lack of interface signals on the screen could mean that users forget about it, or never discover all of the options, Apple is likely to remind you of the feature with tutorials and popups. If you’re looking to get a head start on finding out what 3D Touch can do on your new iPhone 6s or iPhone 6s Plus, we have all the details for you. 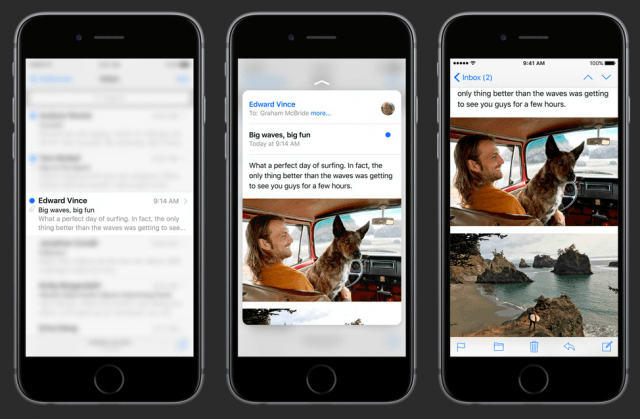 Peek and Pop are two new 3D Touch gestures that enable you to preview content and complete tasks without having to actually open the content. Take, for instance, your inbox in the Mail app. With a light press, you can Peek into an email to preview it. The content of the email will appear on top of your inbox. If it’s a short email, and the Peek is all you need, you can stop pressing to go back to your inbox. To Pop into the email, you can press deeper. That will yield a full view of the message, just like the one you’re used to seeing when you tap a message to open it from the inbox.

You can use the same gestures when, for example, a friend texts you a link to a website. You can press lightly to Peek at the page without leaving the screen that you’re on, and the top of the page will appear like it would in Safari. You can stop pressing to go back to the message. If you want to open the full page in Safari,  just press more deeply to Pop into it.

Apple’s new 3D Touch gestures also enable you to view the photos you’ve taken while you’re still taking new images. (Just press lightly on the thumbnail image at the lower left corner of the Camera app to Peek into a photo, or press deeper to Pop into a photo and share, edit, favorite, or delete the image.) Or, you can Peek at a location by pressing an address in a message.

3D Touch also enables a new, time-saving feature called Quick Actions, which Apple explains “let you do the things you do most often faster and in fewer steps.” Many Quick Actions can be completed with a single press on an app’s icon on the Home Screen. For instance, you can press the Phone icon to quickly call one of your favorite contacts. You can press the Camera icon to quickly take a selfie, take a photo, record a video, or go straight to the slo-mo mode. Pressing the Messages icon enables you to start a new message, or quickly send a message to one of your favorite contacts. And pressing the Maps icon enables you to quickly get directions home, drop a pin on your current, send your location to a friend, or search what’s nearby.

3D Touch offers quick access to common tasks not only from the Home Screen, but also from the screens that appear when you Peek into content. When you Peek into a web page in Safari, you can swipe up to gain quick access to commonly-used actions like copying a link, opening a new tab, or adding the page to your Reading List. When you’re in Mail or Messages, you can press on a contact’s profile photo to bring up all of the contact information you have for that person. Or, when you’re taking a Peek at an email, you can swipe left to delete it or swipe right to mark it as unread. 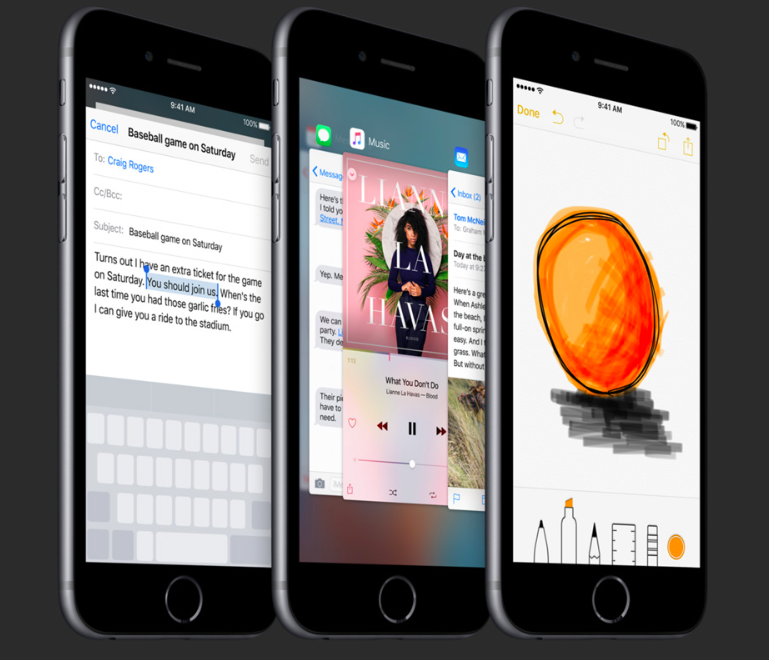 Even beyond Peek and Pop and Quick Actions, 3D Touch-enabled features will make appearances throughout iOS 9 and Apple’s apps for the operating system. Within apps like Notes, Mail, and Messages, you can press the keyboard to turn it into a trackpad, with a cursor to easily select and manipulate text. If you’re switching between apps, you can press the left side of the Home Screen to switch to multitasking view. Then, you’ll swipe until you find the app you’re looking for, and tap to open it. Additionally, you can use 3D Touch in the Notes app to make drawings, pressing lightly for finer lines and more deeply for thicker ones.

Developers of third-party apps will also be able to add 3D Touch-enabled actions to their apps, including pressure‑sensitive drawing, Peek and Pop, and Quick Actions. By adding features like Live Photos — in which you’ll press on a photo to see a moving version of the shot — Apple will get you accustomed to using Force Touch, which will only help you out when the feature becomes widely adopted among app developers and offers a new way to interact with your favorite apps.

However, 3D Touch will remain optional for the next few years, since only owners of the new iPhone 6s and iPhone 6s Plus — and whatever future iPhones Apple releases — will have access to it. As Romain Dillet reports for TechCrunch, it’s also unclear whether many Android phone manufactures will take cues from the feature, and multi-platform app developers will have to bear in mind that the Android versions of their apps won’t be able to be equipped with pressure-sensitive features anytime soon.

Even as 3D Touch catches on as a faster way to get things done, it will take some adaptation on the part of users and developers to take full advantage of the technology. But 3D Touch makes multi-touch multi-dimensional, and it’s difficult to imagine that the way we interact with our iPhones won’t be forever changed by the introduction of 3D Touch.