5 Apple Patents We Want to See Turned Into Real Devices

The patent applications that Apple files and the patents that it’s granted are a topic of interest for numerous Apple fans, spawning regular columns on Apple news sites and even blogs dedicated to filings on Apple’s intellectual property. Cupertino is famous for filing and holding far more patents than it could ever possibly incorporate into its expansive product lineup. But year after year, there are always patents that hint at future hit Apple products, and patent applications that we hope will become real Apple devices. Read on for some of the most exciting Apple patents that we hope will become real devices in the near future. 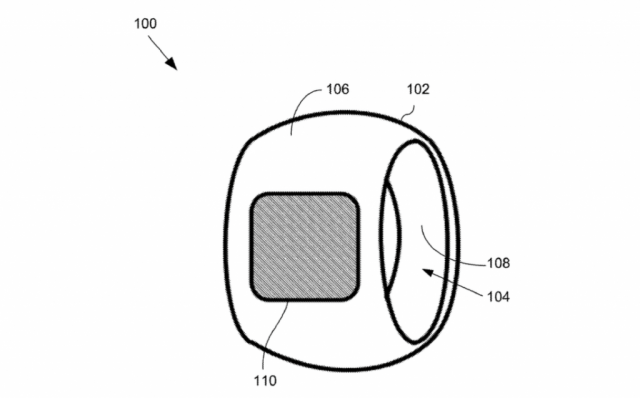 We already have the Apple Watch, which made a splash as Apple’s first wearable device. Mikey Campbell recently reported for Apple Insider that rumors claiming Apple has been researching an “iRing” wearable device seem to have some truth to them, since Apple recently filed a patent application for a ring-style wearable that uses voice, motion, and touch input to control and interact with other devices. Campbell notes that the application reads like an overview of the Apple Watch, with many of the innovations introduced with the watch — including Force Touch and the Taptic Engine — packed into a much smaller form factor.

The application doesn’t mention the Apple Watch by name, but does say that the ring could be used as a stand-in for a “smart watch” crown mechanism. The ring is powered by an onboard processor, and could incorporate a touchscreen, a mechanism like the Apple Watch’s Digital Crown, or accelerometer or gyroscope modules to enable gesture input. The ring could communicate with a paired device via WiFi, cellular, Bluetooth, or NFC. The commercial debut of Apple’s smart ring doesn’t seem likely within the next few years, but the work on person-to-person Apple Pay, HomeKit and CarPlay integration, and video game control that the application describes could show up on the Apple Watch.

2. An iPhone with a wraparound display 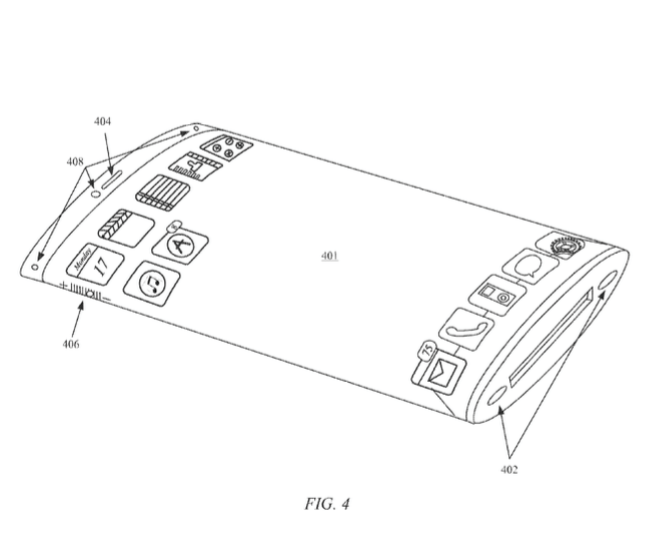 As The Cheat Sheet reported a couple of years ago, Apple’s patent filings reveal that it’s been investigating how to manufacture an iPhone with a wraparound display. The device would feature a flexible AMOLED display, which would be folded and then inserted into the chassis so that it wraps from the front to the back and around to the front again, creating a seamless display that significantly expands the area that can be used to display images and data without increasing the overall size of the iPhone.

Apple has been thinking about the invention as recently as this summer, when Patently Apple reported that Cupertino made some changes to the claims of the original patent. As the continuation patent explained, device would use optically transparent glass, and the design would also eliminate all of the physical buttons on the iPhone, replacing it with a “second interface” for audio and other options, which Apple characterizes as a slider control. The updated version of the patent explains that the transparent housing of the device would be rigid, in order to prevent deformation of the flexible display as you’re using the iPhone. 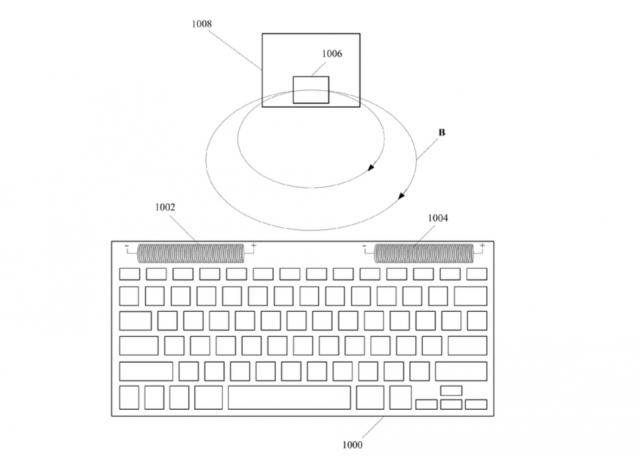 Another persistent — and compelling — rumor about Apple’s future iPhones and even Apple Watches is that they could have wireless charging capabilities. As Vikas Shukla reported for ValueWalk last year, Apple was granted a patent that describes a method of charging peripheral devices wirelessly with near-field magnetic resonance. A computer, for instance, could transmit small amounts of electricity that would be received by devices within a meter. The peripheral devices, like a wireless keyboard or mouse, could receive the energy via integrated wireless power units, which would be approximately the size of a AAA battery. The same wireless charging system could be used in desktop computers, tablets, and laptops.

As Patently Apple reported in August, Apple continues to work on the wireless charging system, and a recent patent filing relates to methods of managing the efficiency of such a system. The filing mentions a dock housing and a charging surface, but doesn’t illustrate a particular design. Instead, the patent focuses on “efficiency management for electromagnetic induction power transfer system,” and on methods for augmenting the impedance of an inductive power-receiving accessory or device. 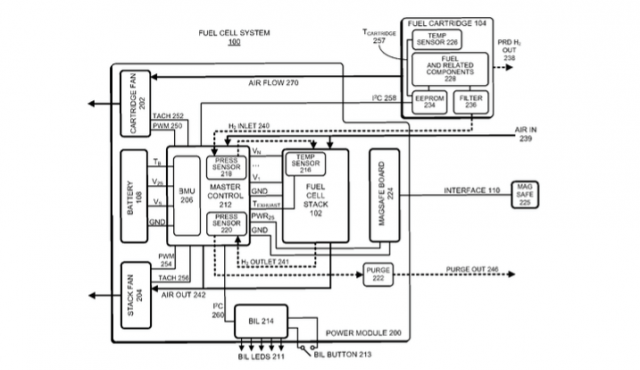 Another battery-related improvement revealed by Cupertino’s patent filings is a fuel cell system that would enable a MacBook to operate for days, or even weeks, without recharging the battery. The invention was revealed by a patent application published this fall, and Ben Lovejoy reported for 9to5Mac that the application came to light shortly after a British company rumored to be collaborating with Apple successfully outfitted an iPhone 6 with a fuel cell battery, powering it for a full week between charges.

Because fuel cells have to be replaced when their power is exhausted, Lovejoy thinks that the most likely implementation of the idea is a mix of conventional batteries and fuel cells, which would enable the MacBook to be recharged in the traditional way, and switch to fuel cell power only when extended wireless use is necessary. 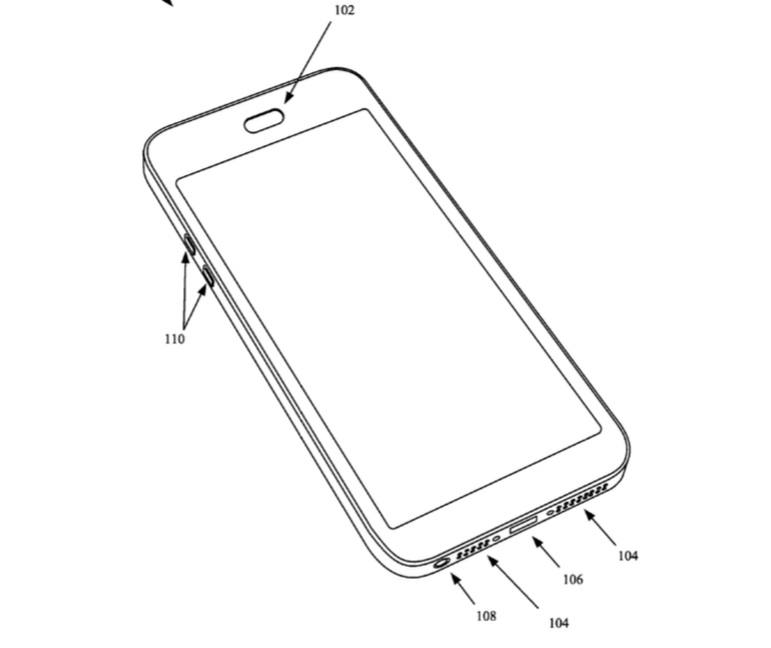 Apple’s latest iPhone 6s seems to be more water-resistant than previous generations of the device, but as the Cheat Sheet recently reported, that doesn’t mean that the phones are secretly waterproof. Fortunately, Mikey Campbell reported for Apple Insider earlier this year that Apple seems to be researching how it can make its devices waterproof, as revealed by a patent application describing methods of applying a “hydrophobic” coating to the various components of a device, which would protect against the short circuits that occur when high voltage parts are exposed to liquid.

The coating would be applied via plasma-assisted chemical vapor deposition, a process that involves charging the surface of a substrate, placing the device in a vacuum chamber filled with fluoropolymer gas, and applying a voltage to the gas. At that point, the gas turns to plasma and then settles on and adheres to the charged substrate. The process could be used to coat exposed surfaces on fully assembled devices, but internal structures like electromagnetic interference might restrict deposition on critical components, so Apple has worked out ways to create openings in the EMI shield.