5 High-Tech Portable Spaces You Can Live In 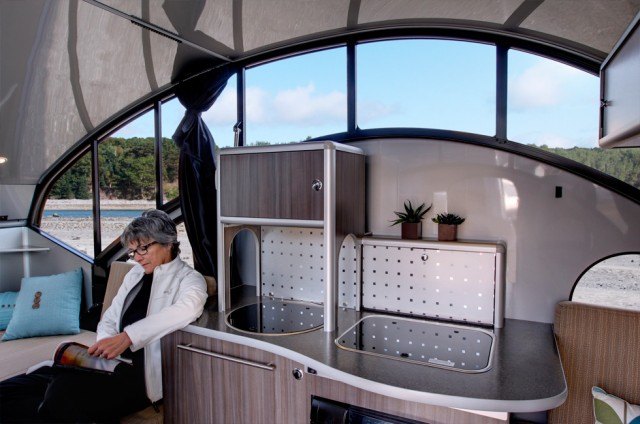 Have you heard of this relatively new thing called “Glamping”? It’s the same as camping but without all the fuss of dirty living. To be more specific, it stands for glamorous camping. A traditional tent is replaced with a modern cabin, high-tech safari tent or a portable camper.

The folks who go glamping get to spend their days and evenings out in the secluded wilds, yet they’re afforded all the amenities of modern living.

Not surprisingly, the practice has birthed a new type of technology — or gadget if you will — designed to accommodate glampers. These are portable living spaces, like campers, RVs or trailers, outfitted with some pretty unique, and awesome high-tech amenities.

Of course, these new portable living spaces are not just for glamping. They also work great if you’re traveling cross country, spending a few nights in a strange place, or just want a place to lay your head.

We’re going to take a look at five of the most interesting portable living spaces you can get your hands on. 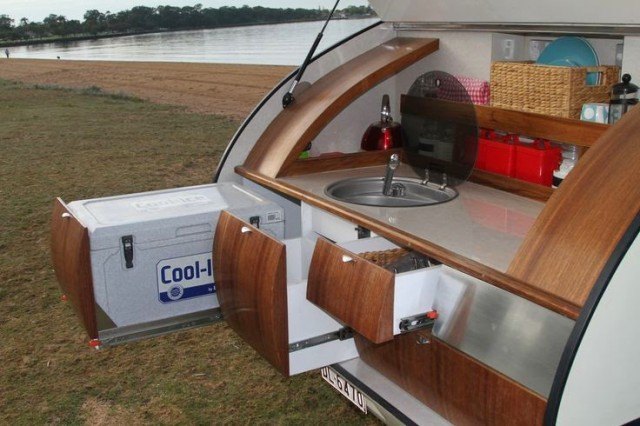 Teardrop campers aren’t new, they’ve been around for a while. They’re essentially RVs or campers slimmed down to a more efficient and portable size. The biggest difference is that you don’t need a truck or large vehicle to tow teardrop campers.

Queue the Gidget. It’s an innovative, space-saving camper that includes all the bells and whistles you might need while you’re on the open road — or nestled somewhere in the wilderness. While parked, the Gidget opens up to reveal a decent sized cabin big enough for two. It comes with a 24-inch HD TV and DVD player combo, radio, and speakers in both the cabin and exterior kitchen.

Yep, we did say kitchen. There’s a kitchen and food preparation area on the rear of the trailer. It features a sink with running water, small fridge, glass cooktop, and more. Additional features include a solar array system with inverter and battery for energy storage, a security alarm, electronic control panel and monitor, and LED lighting both inside and outside the trailer.

It’s fully customizable too. You can add or remove features that you’ll never use and change the appearance of the trailer to match your personal style. It’s about $13,000 for the cheapest Bondi model or $16,000 for the Noosa model.

The company behind Gidget is based in Australia but don’t fret, they offer sale prices and specifications for U.S. models of the trailer. 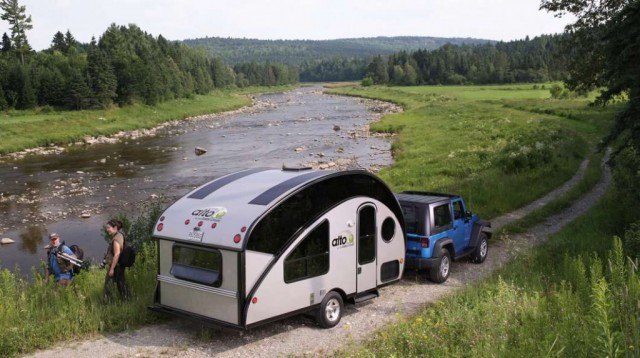 Forget decked out Winnebagos, teardrop campers are the way to go. If you don’t mind paying a bit more for a premium model, check out the Alto R 1713 and R 1723 compact, recreational campers.

The trailers are lightweight, aerodynamic, and accessible. What makes the Alto campers stand out is that they both have electric, retractable roofs. When you’re parked, you can quickly open up the camper for some added head space.

The Alto campers are much larger than the Gidget, as they can house up to four people comfortably. There are two sleeping areas, an extendable dining area, a full kitchen and both a toilet and a shower. The kitchen has a two-burner stove that runs on gas, full-size sink, and a mini fridge. If you want to make the trailers more energy-efficient you can choose the optional rooftop solar array which can be used to generate electricity, and also powers the hot water pump and AC system.

If you want one the Alto trailers you’ll need to save up about $23,000 to $30,000 depending on the model and features you select. They’re a great solution if you plan on roaming the countryside or doing some off-grid living for a while. 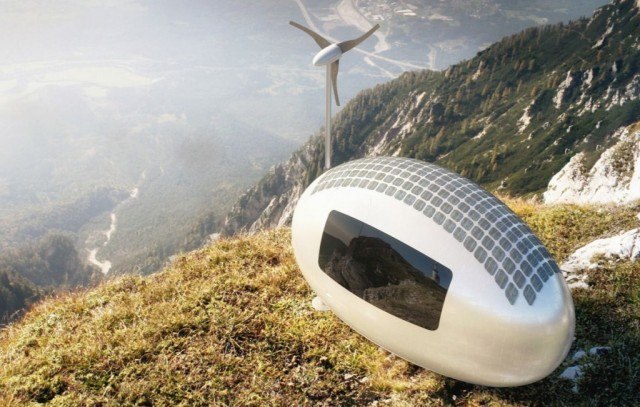 It’s a 14.5-foot living pod that can be used any way you see fit: Whether that be as a portable shelter, research station, camping pod, or something else entirely.

A second generation model will be launching sometime in 2016 and offers a sleeping area big enough for two people, a shower, kitchenette, climate control system, and standard size electrical outlets. There’s even an H2O free toilet, which simply incinerates your waste after you’ve done your business. That way, you don’t have to worry about polluting the environment.

To generate power, the Ecocapsule piggybacks off of a 750-watt wind turbine on the rear, and a 600-watt solar array on the roof. As long as the temperature outside the pod remains between -13 and 104 degrees Fahrenheit it will continue to generate its own power. There’s a 9,744-watt-hour battery that can hold a charge for up to five days. It should work great for the times when there’s not enough energy generated because of inclement weather or the like.

Rainwater is collected in a 145-gallon reservoir located underneath the floorboards of the pod. Electric pumps push the water through a membrane filter to filter out nasty dirt and bacteria before it makes its way to the sink and shower. When energy reserves are low there’s a manual pump to clean out the water. The company claims the water tank can serve two people for up to three weeks when it’s full.

Not to mention it’s all monitored via a central computer that can display energy and water levels, the amount of rainfall collected, indoor and outdoor humidity levels and temperature. Owners can tap in with their smartphones or tablets to monitor everything. When energy is lacking, the software will make habit changing suggestions to conserve resources.

The price has not been announced yet, but will be available sometime before the end of 2015. 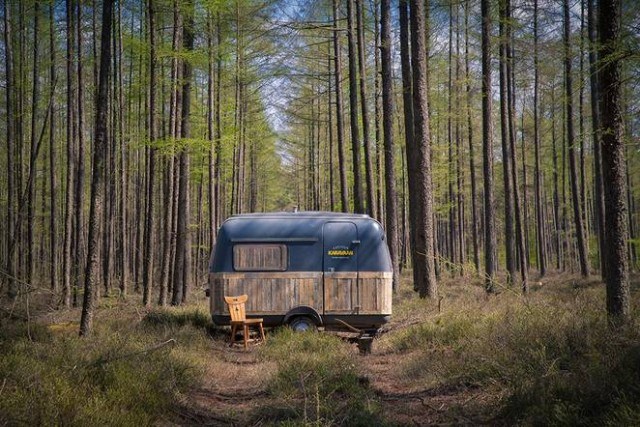 The KantoorKaravaan is designed to be an off-the-grid office for those interested in working out in the middle of nowhere without any distractions. The interesting thing about this portable living pod is that you cannot actually purchase it, instead you rent the space for a specific amount of time.

There are actually several models available, one of which is called a “board room” model and can accommodate a team of workers. The one we’re going to focus on has enough space for two people.

The rear of the pod is outfitted with a solar array and it’s attached to a battery reserve system. It generates enough energy to power small devices like a laptop, smartphone, or tablet. The pod also comes with LED lighting, and an espresso machine.

Now, you’re probably wondering how anyone can work out in the middle of nowhere without an active internet connection, right? The pod has an integrated MiFi mobile router which connects to the internet and allows anyone staying in the pod to tap in.

Additional features include a biomass cooker to prepare food, mobile tents for those who wish to extend their stay and mobile composting toilets, safe for natural use.

The pods were first available for rent in Holland but have since been made available in Greece, Spain, the US and Sweden.

As for prices, they are flexible. The company behind the KantoorKaravaan asks that interested parties merely pay what they can afford. Part of the payment comes from handling basic maintenance of the pods while you stay in them.

Echo is a U.K.-based company that specializes in modular, off-grid housing. Its solution comes in the form of the Eco Pods, nearly 100 square feet housing pods that can be used any way you see fit. Don’t let the fact that it’s a foreign company turn you off from its portable pods. They cost about £10,000 per module, roughly $16,500 in USD.

There are multiple modules available including a home office, garden or green room, holiday homes, and off-grid work or living spaces. Each module is customizable both inside and out according to the customer’s needs. They even come with adjustable legs to sit on top of, which is great if you want to install the pod on uneven ground.

They’re efficient and insulated with wood fiber or sheep’s wool, whichever you choose. In addition, they include a variety of sustainable living options to cut down on operating costs if not allowing complete self-sufficiency.

You can opt to install solar arrays, a composting toilet, a log burner for hot water and for cooking and more. The solar array will provide electricity and heat for water, thanks to cells positioned on the roof. While the sun is available, the array will charge up a 12V DC battery that can power LED lights and low-power appliances as necessary.

Eco Pods are an excellent option if you want to live off-the-grid or in an open space yet still have modern amenities such as electricity, heat, and water.