5 Remote Control Drones You Can Take to the Skies With 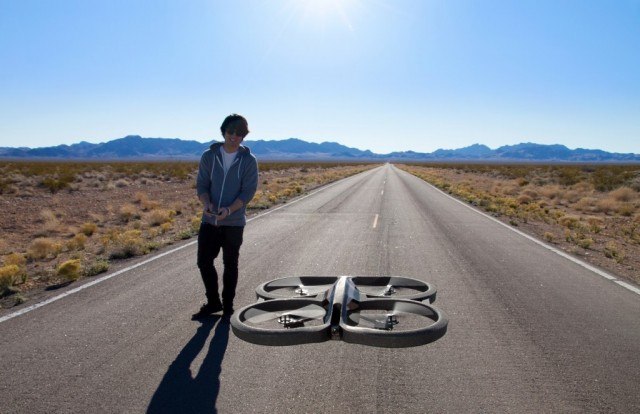 For a long time, drones, or unmanned aerial vehicles — UAVs — were primarily used for military applications. In just the past couple of years, several products have been made available for everyone. If you want to, you can pick up an aerial drone for yourself — or your kids — to fly around and have some fun with.

Many of them are equipped with HD cameras so you can get some awesome shots of your neighborhood, the surrounding areas or even the sky. They are operated via remote control and generally have a decent battery, with enough juice to fly around for a few miles. They come in many shapes and sizes too. There are R/C helicopters, quadcopters, hex copters and more.

We’re going to take a look at five of the best drones you can get your hands on. 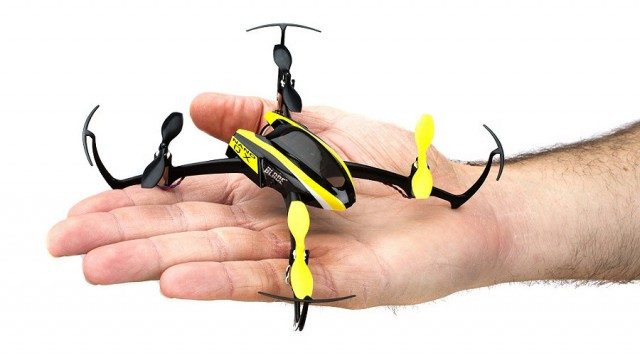 If you’ve never flown a drone or R/C helicopter before then the Blade Nano QX is a great place to start. It’s easy to use, small and relatively affordable at about $90. The body is tough and durable, and it includes prop guards for added protection.

The Blade also has some pretty unique stability controls meant to help first-time flyers, called SAFE technology or sensor assisted flight envelope tech. It has two modes: one for stability and the other for agility. The technology essentially helps you fly the device and avoid serious accidents.

Extra rotor blades are included so if you damage the existing ones or do happen to run into something, you have replacements.

The 150mAh lithium-polymer rechargeable battery can last for about 7 minutes of flying time on a single charge, with a full charge taking about 25 to 30 minutes. It has a USB port which is what you’ll use to recharge the battery. Also, the battery can be easily replaced which is good news because rechargeable batteries do tend to wear down over time.

It’s about the size of a fist and fits neatly into the palm of your hand. For that reason, the Blade Nano QX is not the type of drone you’ll want to fly long distances away. Furthermore, there are no brackets or mounts for video cameras ,which is a shame.

Still, it’s a great option if you’re just getting into the remote controlled drone market and it’s cheap. 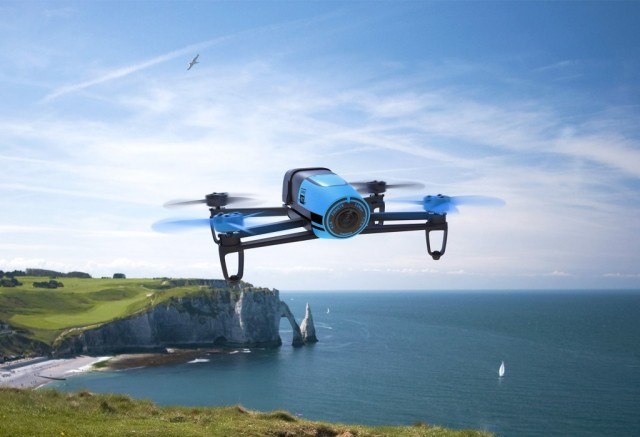 Parrot is responsible for one of the most popular drones on the market called the Parrot AR Drone, and although it’s an excellent device we decided to highlight their latest product: the Parrot Bebop.

The Parrot Bebop is a mid-sized drone that comes with an integrated 14MP HD camera. One of the most promising features is that you can utilize FPV mode (first-person view) to pilot the craft. While active, you can see exactly what the drone sees as if you’re sitting inside the cockpit of a plane.

Better yet, you can use a smartphone or tablet to pilot the drone with Parrot’s app. You can also use the SkyController unit from Parrot if you have one, or plan on getting it.

People who’ve used the Bebop say it flies like a dream and the added camera support means you can record and capture your entire flight experience. You don’t have to worry about syncing it up with computers, tablets or smartphones via a wired connection either because the Bebop generates its own Wi-Fi hotspot.

However, with all the added hardware the Bebop will only get about 10 to 15 minutes of flight on a single charge.

You can pick up one of these for $500 on Amazon, but if you want the SkyController unit with it — which offers an extra 2km of flight range — it will set you back $900. 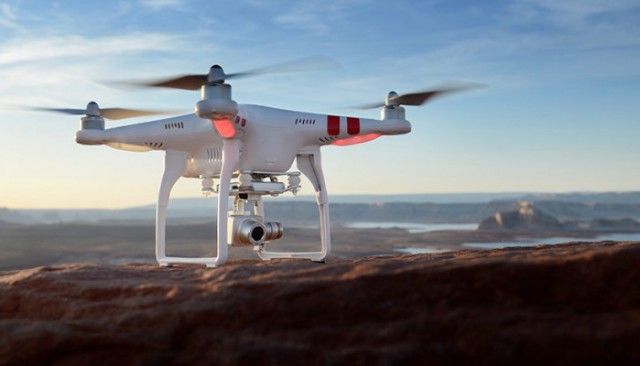 Alright, so this entry is for two drones from the same company but that’s okay because they vary in price considerably. The Phantom 2 Vision+ is the most recent drone from the company and costs about $1200, which is quite a bit more expensive than some of the others we mentioned. On the other hand, the older Vision is about $800. Both models are exceptional, and offer plenty of features for the money.

Both allow up to a half-hour of flight time on a single charge and include integrated HD cameras with support for first-person view (FPV) control modes. Automated camera stabilization support and control options for your smartphone or tablet are included too. Any photos or videos you capture you can transfer to your device via Wi-Fi as soon as the drone is back on the ground, which is certainly convenient.

Because you can control the drones with your smartphone or tablet, you can also set a designated “flight path” which the drone will follow.

There are extra accessories for both models including extra batteries, spare rotors, and a carrying case.

If you have previous experience with drones and want something a little more advanced, the DJI Phantom models are right up your alley. 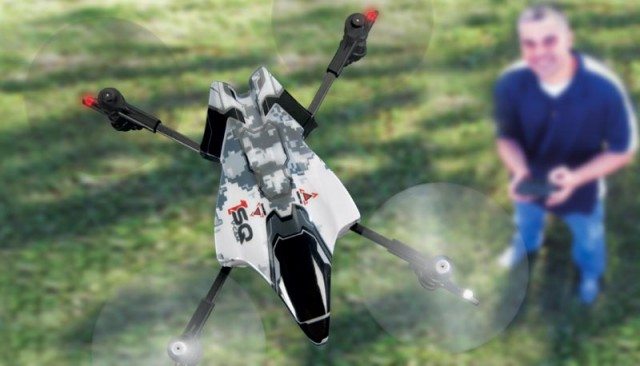 The Heli-Max 1SQ V-Cam RTF Quadcopter is both affordable and feature-friendly. It includes an integrated HD camera that can record videos at 720p at 30 frames per second and take 1MP still photos.

LED lights on each of the motor pods allow you to see the drone’s orientation even at night. This is great for flying in the dark and helps you ensure the copter remains upright and out of harm’s way.

The lithium-polymer rechargeable batteries will last for about 10 to 12 minutes on a single charge, and take about 45 minutes to juice up. You can charge the device via a USB port on a computer or laptop, or you can use a USB adapter — like most smartphones use — to charge it via an outlet.

A unique “auto-flip” feature allows you to flip the copter any time while you’re still in the air. Several reviewers have mentioned that this trick is difficult to master for beginners, so keep that in mind.

It’s great for beginners too thanks to the TAGS-FX Fusion sensor stabilization system. It basically means the device calibrates itself to stay level, thanks to a 3-axis gyroscope and 3-axis accelerometer. Just land the drone on a flat surface and let it sit to calibrate itself.

You fly it with a proprietary radio controller so sadly there’s no smartphone or tablet support, but the price more than makes up for it. You can pick up one of these bad boys for $130. 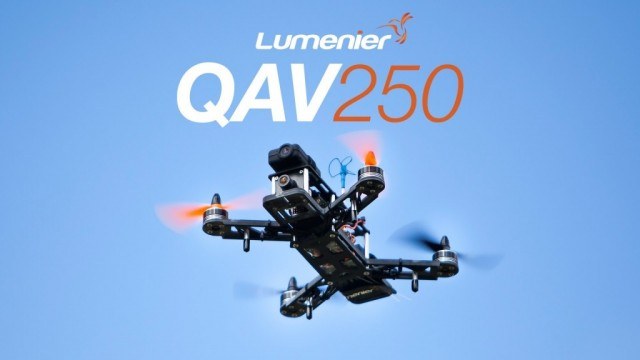 The Lumenier QAV250 is pretty unique because it’s designed for hobbyists and DIYers. It comes in a bundle and arrives as a unibody quadcopter frame. To reiterate, it’s just the frame and you must make your own modifications before taking it to the skies.

If you buy the full kit it includes everything you need to get the copter into the air, including rotors, an engine and more. If you’d like to custom build the copter you can purchase each of the components separately. This allows you to build the final product to your personal specifications, meaning you can build it for tricks, video capture, long range flight, or something else entirely.

There are even multiple mount options for HD cameras, so you can choose one that best fits the type of video capture device you want.

The base kit with everything you need is about $130, but if you’d rather the carbon fiber version it will be $150.