5 Samsung Rumors: From Foldable Phones to an S7 Active

Samsung’s Galaxy S7 and Galaxy S7 Edge may be some of the best smartphones of the year, but that doesn’t mean that Samsung is stopping there. The South Korean tech giant has plenty of other products in the works, and the ever-active rumor mill isn’t shy to speculate about them. Read on to catch up on the most exciting Samsung rumors to surface this week.

1. There may be a Galaxy S7 Active, after all

Evan Blass reports for VentureBeat that the first official evidence of a Galaxy S7 Active just appeared in a Google Play Store app listing. While previous rumors indicated that there might not be an Active model of Samsung’s latest smartphone, the Galaxy S7 Active is listed as a compatible device in the latest version of the Samsung Level app, which is software that controls some of Samsung’s Bluetooth audio accessories.

That evidence dovetails with a recent listing on Zauba, a site that tracks imports to ad exports from India, and shows that a 5.1-inch phone with the model number SM-G891A (which follows the same nomenclature as last year’s Galaxy S6 Active) entered the country, as most Samsung phones do en route to software testing facilities. Like the Galaxy S6 Active and the Galaxy S5 Active, the S7 Active could be released in June.

As James Vincent reports for The Verge, it’s unclear how Samsung will differentiate a Galaxy S7 Active from the water-and dust-resistant S7. Vincent notes that Samsung already dealt with a similar conundrum with 2014’s Galaxy S5, which was rated IP67 for dust and water-resistance. The company still produced the S5 Active, with which it added shock resistance, a rugged rubber case, a “camo green” color option, and a dedicated button for launching apps. Any of those features could be integrated into the S7 Active, and the device’s codename, “Poseidon,” could hint at robust waterproofing.

2. Samsung may be working on a foldable smartphone

Zach Epstein reports for BGR that Samsung may be working on its most innovative smartphone: a phone with a large display that can be folded in half. A new Samsung patent application reveals that the company is developing technology that would enable it to build a flexible, foldable smartphone. That could be the most revolutionary phone that the company — or the smartphone market as a whole — has introduced since the early days of the smartphone revolution.

While patents and patent applications surface all the time, it’s interesting that this application was filed on March 11 and published just two weeks later — an accelerated schedule that could indicate that Samsung is in the “advanced stages” of the device’s development. Earlier rumors also stated that Samsung was planning to introduce a smartphone with a bendable screen sometime in 2016.

Epstein notes that Samsung has a “mixed history when it comes to innovation.” The company often takes a while to get things right, such as the curved screens it’s begun to include in a variety of different smartphone models. Even with the Galaxy S6 Edge and Galaxy S7 Edge, the curved edges of the screens do little other than to differentiate the Edge models from the standard models, and to make the phones a little more comfortable to hold.

3. A second-generation Tizen-based Z1 may be on its way

According to Trusted Reviews, Samsung may release a second-generation version of its Tizen-based Z1 this year. While details about the device are sparse so far, a report from SamMobile indicates that the device could have an AMOLED screen. The original Z1 features a 4-inch screen, 3G connectivity, a removable 1500mAh battery, dual-SIM capabilities, and microSD card support. Samsung has so far avoided making many smartphones powered by Tizen, which has become the company’s go-to platform for smartwatches and fitness trackers.

Phone Arena notes that Samsung has, so far, released only two Tizen-based smartphones: the Z1 and the Z3, both of which were introduced last year. The Z1 could be introduced as early as June, if this year’s release follows the timeline set by last year’s version. A new Z1 would be an entry-level device, and could cost about $90, the launch price of last year’s Z1. The original Z1 and the Z3 haven’t yet been released in the U.S., but it’s still possible that Samsung is planning to bring a new Z1 or another Tizen-based smartphone, to North America. 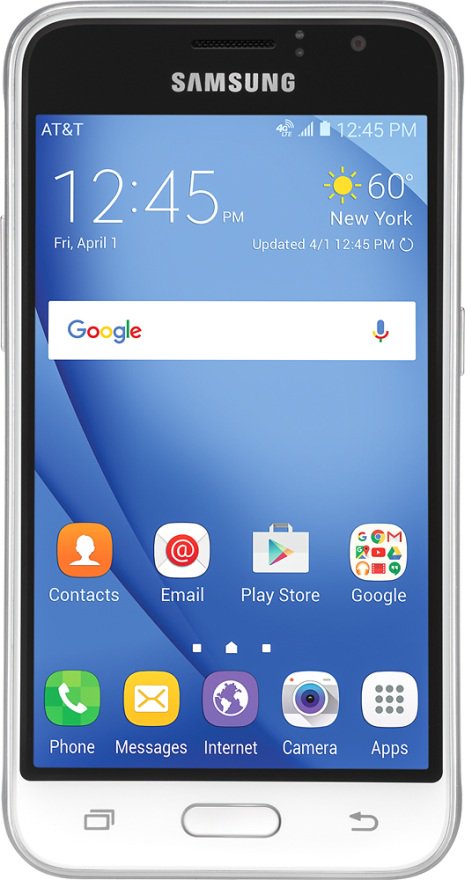 As Adnan Farooqi reports for UberGizmo, Samsung’s new budget-friendly Galaxy J1 may make it to the U.S. via AT&T’s network. The device was first introduced in Russia about two weeks ago, and as the phone makes its way to markets around the world, it may be on its way to the United States. A render of the entry-level smartphone leaked online with AT&T’s branding, and was tweeted by Evan Blass. There’s no word yet on potential pricing, or when AT&T might make an announcement about the device’s availability.

The Galaxy J1 is a budget-friendly, entry-level phone, with a 4.5-inch Super AMOLED display, a 1.3GHz quad core processor, and 1GB of RAM. It also features a 5MP rear-facing camera, a 2MP front-facing camera, 8GB of storage (expandable with microSD card support), and a 2050mAh battery. If it follows the price tag of its predecessor, the new J1 is likely to cost around $120.

Tyler Lee reports for UberGizmo that Samsung’s Gear S2 smartwatch could gain compatibility with iOS devices very soon. Samsung confirmed earlier rumors at CES 2016 with an announcement that iPhone support is coming to the Gear S2 later this year, though no specific dates were shared. According to rumors about a conversation with a Samsung representative, the Gear S2 could gain iOS support by the end of March.

Support would be added via an update that would make the device compatible with the iPhone. At the same time that Samsung releases such an update, it’s also expected to introduce the Gear Manager app for iOS, which would enable users to sync the smartwatch with an iPhone.