LG recently announced its brand-new flagship phone: the LG G5, which competes directly with Samsung’s new Galaxy S7. The LG G5’s biggest selling point is that it’s modular, and you can snap off the bottom piece of the phone to swap out the battery, or replace the piece with a Cam Plus camera module or a HiFi audio module that was developed with Bang & Olufsen.

The The Cam Plus module adds a 1200mAh battery and camera control buttons; the buttons include a toggle to launch the camera, a shutter, a video record button, and a digital zoom knob, but you still need to use the camera app to change settings like the ISO, shutter speed, EV, and white balance. The Bang & Olufsen Hi-Fi module incorporates a digital-to-audio converter and a 3.5mm headphone jack.

All of that sounds impressive, especially if you’re already interested in the idea of modular phones. Like any phone that’s alternately regarded as innovative or gimmicky, the LG G5 and the selection of modules that have been introduced so far have their own set of problems and issues. Here are the ones you should be aware of if you’re trying to decide whether the LG G5 is the right smartphone for you.

1. The LG G5’s modules are a solution in search of a problem

Derek Kessler reports for Android Central that the LG G5’s swappable expansion modules may not matter at all. While the modules are an interesting way for LG to add new functionality to the phone without increasing the base price, Kessler notes that the idea is similar to the Handspring’s Springboard expansion slot, which enabled the user to add a number of different modules to compatible Handspring PDAs, including games, reference libraries, backup drives, cameras, MP3 players, cellular radio, or GPS navigation.

The problem, in Kessler’s assessment, is that “there’s nowhere near as much need for expanding the functionality of smartphones with physical attachments like this as there was back then,” since every smartphone includes a built-in wireless modem and radio (plus a camera, and GPS and MP3-playing functionality), reference libraries and games are simple available as apps, and many of the other modules, like gaming controls and scanners, have been replaced by universally-compatible Bluetooth devices.

2. Compatibility will likely be a big problem for the LG G5’s modules

Another issue with the LG G5 is that the company has offered no indication that the expansion modules you purchase for the G5 will be compatible with any future device. Kessler notes that he’d be surprised if they were. While the Springboard modules were compatible with a range of devices — including the Visor, Visor Deluxe, Visor Platinum, Visor Neo, and Visor Pro — the ecosystem of third-party modules worked because the devices were all roughly the same size, and the expansion slots were narrower than the PDAs. With the LG G5, you attach a module by removing the lower portion of the phone and attaching a different piece in its place.

While LG’s design is certainly more elegant than that of “clunky” PDAs, the solution will either limit the future compatibility for modules purchased for the LG G5, or will restrict LG’s industrial design for future phones. If the modules designed for the G5 only work with the G5, then users who have invested in a module or two will be upset when those modules aren’t compatible with the next pricy flagship phone they’ll want when it’s time to upgrade. “Everything else we use with our phones — speakers, chargers, robot toys, home security systems, etc — are by-and-large universally-compatible,” Kessler writes. “I don’t even expect modules purchased for the G5 to work with the eventual G6, and that’s a problem.”

3. It’s unclear whether anyone else will really make modules

Another uncertainty with LG’s long-term strategy with the modular G5 is that the company says that the CAM Plus camera controls module and the Hi-Fi Plus audio module are just the first two modules. The company also intends to release an API that will enable other companies to make their own modules. But it’s unclear who is going to develop such modules, and whether LG will subsidize the cost of manufacturing such a niche accessory.

While LG sold nearly 60 million smartphones in 2015, it’s struggled to sell high-end models like the LG G5 — which makes it even more uncertain whether third parties will really develop modules for LG. While there’s potential for companies to sell a high-end camera module, an extended battery, a better speaker, or physical gaming controls, the modules will likely be a tough sell, especially because the LG G5 is an expensive phone to begin with.

4. The LG G5’s modular design has a significant flaw 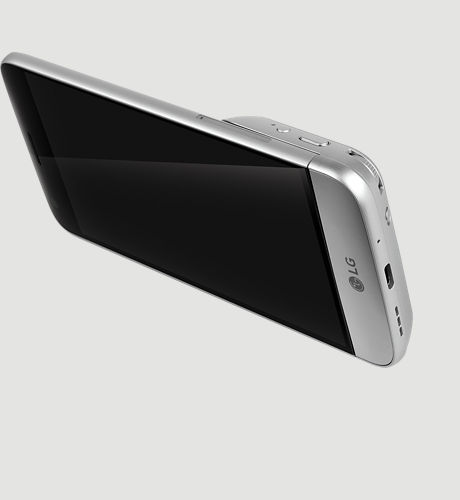 While the necessary reboot won’t destroy the user experience, it’s still bad UX. If the modules aren’t meant to be swapped when you’re on the go, the rebooting is less annoying. While that might make sense for the Hi-Fi audio module, which users will likely leave on the phone all or most of the time, the camera module is clearly not designed to be attached to the phone and forgotten. The added bulk and awkwardness is great when you need better control of the camera, but would be annoying to have on your phone all the time. It seems unlikely that the forced reboot will be a deal breaker for consumers who are otherwise interested in the phone, but for some, it will make using the modules much more annoying.

5. The LG G5 many not stand up to the competition

David Ruddock reports for Android Police that while there are some things to love about the LG G5, the company is asking “Galaxy S7 money” for its new flagship, and Samsung’s phone is more impressive in many respects. The LG G5 “drops the ball in too many areas to be a legitimate threat to Samsung.” It features only mediocre battery life, “a lot like a typical phone from 2015 running Marshmallow,” and cameras that are bested by those in the Galaxy S7 or latest Nexus phones. Additionally, the design of the LG G5 has been questioned, and even ridiculed, by critics who note that it looks like two different teams designed the back and the front of the phone.

While many people don’t care about the design of a smartphone, it starts to matter when you consider the polished design of its biggest rival, Samsung’s Galaxy S7. Certain design choices — like the placement of the power button on the back of phone, which necessitates picking the phone up to turn off the display if you’ve been using it on a flat surface. And while the modules are interesting on paper, there’s too little incentive for manufacturers to develop modules for a single phone. “The engineering is undoubtedly clever,” Ruddock explains, “but the business case seems bunk. Samsung can’t even get more than a handful of bespoke USB accessories for their uber-popular phones, what makes LG’s effort any more likely to succeed?”

6. The software leads a lot to be desired

The LG G5 ships with a new version of the company’s LG UX, this time with LG UX 5.0. But Ruddock explains that despite the new version number, this isn’t anything more than a fresh coat of paint. The G5 ships with an app drawer on the stock launcher, and while the launcher is much less prominent, it doesn’t change the fact that most stock launchers are better replaced by custom launchers. The notifications and power controls have gained a new theme, and LG has removed settings that are outdated or duplicate other features.

Ruddock reports that LG’s UX 5.0 “provides little in the way of compelling reasons to exist.” Unlike Samsung’s TouchWiz, which at least includes features and options that are unique to Samsung’s phones, LG’s software “has a fraction of the additional functionality and … even more of the ugliness.” LG has largely avoided packing in features that users don’t appreciate or even discover, but the result “is a phone whose software can’t even pretend to make up for a phone that is in many other respects quite so mediocre.”