Samsung recently launched the Galaxy S7 and Galaxy S7 Edge, its best flagship smartphones yet. While the launch event for those devices may turn out to be the highlight of the company’s year, Samsung still has plenty of other new products in the works, so there are plenty of exciting rumors surfacing about the company’s latest plans and products.

1. New models of the Galaxy Tab A and Tab E are coming 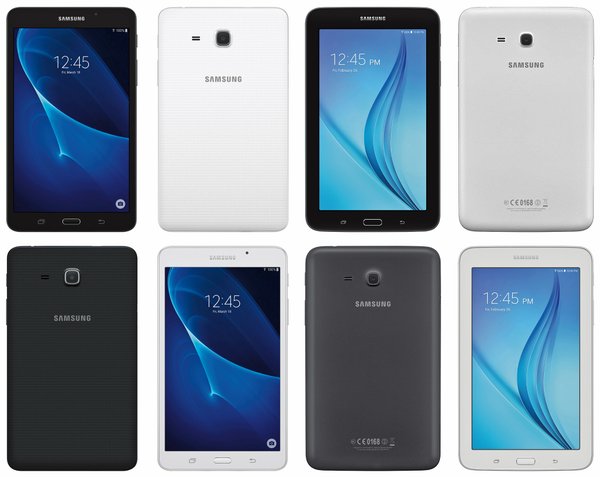 While the Galaxy S7 and Galaxy S7 Edge may be the most exciting devices that the company will launch this year, the company isn’t stopping with the launch of its new flagship smartphones. Cam Bunton reports for 9to5Google that Samsung seems to be planning to launch new tablets this year, and Evan Blass has leaked a set of press renders that purportedly show the 2016 versions of the Galaxy Tab A and the Galaxy Tab E.

Both tablets have 7-inch displays, and the E-series model is expected to be a more affordable, basic device, while the A-series model will be a higher-end device. Little in the design of the devices has changed over the past few years, and Samsung doesn’t appear to be planning any big external changes for this year’s models, either. The tablets will feature a traditional home button between the capacitive back and multitasking buttons, and the back will feature a camera placed just above the brand logo. The biggest difference between the designs of the two devices is the slimmer bezel surrounding the display on the Tab A.

It remains to be seen how Android manufacturers will approach the tablet market this year. Google has yet to optimize the operating system for tablets, and while Android N should add features like multi-window support, that won’t immediately fix the lack of tablet-specific apps. However, Samsung has been one of the few companies to keep building multiple ranges of tablets. It’s even created its own user interface for multitasking, and its ongoing interest in the tablet market may indicate that the Tab A and Tab E aren’t the only tablets that the company will launch this year.

Cho Mu-hyun reports for ZDNet that Samsung will launch a leasing program for the Galaxy S7 and Galaxy S7 Edge when the devices are released on March 11. Much like the iPhone Upgrade Program that Apple launched last fall, Samsung’s upgrade program would enable buyers to get a brand-new smartphone, and then upgrade to a newer model after paying the monthly fees for just a year. Users would sign up for a 24-month installment plan, but could upgrade to a new phone after 12 months.

So far, Samsung will only offer the program via the Samsung Digital Plaza in South Korea and through its own brick-and-mortar stores when sales of the Galaxy S7 and Galaxy S7 Edge officially begin. The upgrade program reportedly won’t be available in other stores where Koreans buy their smartphones. Samsung will partner with its affiliated Samsung Card credit card company, and users will pay monthly fees to the financial firm. They’ll also be able to select any of South Korea’s mobile carriers, including SK Telecom, KT, and LG Uplus.

3. Samsung may copy Apple’s branding choices with the Galaxy S7

The removal of the branding on the front of the phones would make the design cleaner, and make the front of the phones more appealing. Gilbert notes that the move could also be a response to the tough market conditions for Samsung, and may be a ploy to get users who would typically be uninterested in Samsung devices to look at one of the phones, and warm up to them before realizing that they’re made by Samsung. The unique industrial design of Samsung’s phones, particularly the Edge model, already differentiate the company’s phones from those made by its competitors. It will be interesting to see whether brand visibility or elevated design is preferable.

4. Future smartphones could get a lot more memory

Stan Schroeder reports for Mashable that Samsung has developed a 256GB flash embedded memory, designed specifically for high-end smartphones. Besides offering a lot more storage space than you can find in today’s top smartphones — which offer only up to 128GB of storage if you don’t count microSD cards — the new chips are extremely fast since they’re based on the Universal Flash Storage standard.

The new chips would enable you to watch a 4K movie on split screen while performing a different task on the other side of the screen. The storage would enable you to keep 47 full HD movies stored locally on your phone, and if your phone supports USB 3.0, you could transfer a full HD movie to or from your phone in just 12 seconds. Samsung says that it will ramp up production of the new chips when demand increases. The new Samsung Galaxy phones are expected to either feature a 32GB or a 64GB internal chip, but the iPhone 7 that Apple is expected to unveil this year could be offered in a 256GB option.

Last week, it was rumored that the Galaxy Note 6 will feature 6GB of RAM and a 4K display. PC-Tablet reports this week that the Note 6 is also likely to feature an all-metal build, the S-Pen stylus, a fingerprint sensor, and an octa-core chipset. Rumors indicate that Samsung will release both standard and curved-display versions of the Galaxy Note 6, though both models are expected to feature the same specifications. While the Galaxy Note 5 featured a 5.7-inch display with a pixel density of 515ppi, the upcoming Note 6 is rumored to feature a 5.8-inch display with about 550ppi.

Samsung is likely to reintroduce the microSD card slot with the Galaxy Note 6, which may feature 128GB of internal storage out of the box. (It’s also possible that the Note 6 could be offered in a 256GB memory option, using the chips that Samsung is beginning to produce.) A microSD card slot could enable users to expand the storage up to 300GB. The phone could include 6GB of RAM, with the same battery capacity as its predecessor, and it’s rumored that Samsung is working on a removable battery for the Note 6.

6. It may make sense for Samsung to buy Tidal

Claire Atkinson reports for The New York Post that Samsung is in talks to buy Tidal, Jay Z’s 16-month-old streaming service. Google and Spotify have also been eyeing the streaming service, and both think that Tidal, despite its struggles, could bolster their existing streaming services. But Jonathan Chew reports for Fortune that while Samsung reportedly isn’t the only company interested in buying Tidal, the acquisition would make sense for few of the other suitors.

Samsung has existing relationships with some of Tidal’s biggest partners, including its owner. In 2013, a million free downloads of Jay Z’s album Magna Carta Holy Grail were released to Samsung users via a special app. And recently, Samsung partnered with Rihanna to release her latest album, Anti. Samsung’s interest is reportedly part of a bigger vision it has for the streaming service, which recently jumped to the top of Apple’s App Store charts thanks to the exclusive release of Kanye West’s latest album. A source told The New York Post, “Samsung is re-engaging; they are working on something really big, and they’re keeping it very quiet in case it leaks.”