Ask any sci-fi geek why December 18 is such a special day this year, and chances are they will point to the premiere of Star Wars: The Force Awakens. And while we agree that the return of one of the most beloved sci-fi franchises of all time is indeed important, that’s not the only special event taking place on that day. This year, December 18 is also National Ugly Christmas Sweater Day, which — as noted on the official National Ugly Christmas Sweater Day website — is celebrated on the third Friday of December each year.

It’s a pretty straightforward holiday: Just put on the ugliest Christmas sweater you can find and rock it all day. However, with this year’s National Ugly Christmas Sweater Day falling on the same day as the premiere of Star Wars: The Force Awakens, we thought this would be an opportune time to highlight some of the ugliest sci-fi-themed holiday sweaters that we have found. From Santa Vader to TARDIS in the snow, here are seven ugly holiday sweaters that are perfect for sci-fi geeks. 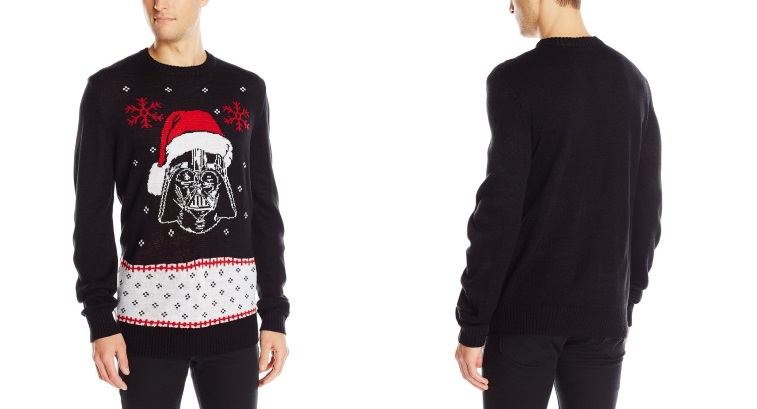 One is a jolly old fat man with a distinctive chuckle who delivers presents to children once a year. The other is an evil cyborg with a creepy breathing apparatus who once cut off his own son’s hand. So there’s not a lot these two characters have in common. Still, with a new Star Wars movie landing in theaters this December, this Darth Vader-Santa Claus mashup sweater may be the most appropriate ugly sweater you could ever wear this holiday season. You can find the Star Wars Men’s Vader Claus Sweater right here.

The debate over which is the better franchise – Star Wars or Star Trek – will probably never be resolved. But at least all sci-fi geeks can agree that both franchises can inspire equally ugly sweaters. OK, so technically these are cardigans (for all you clothing sticklers out there), which are basically just sweaters that open in the front. But let’s not split hairs over labels, because what really matters is that these Star Trek cardigans are ugly. I mean, let’s face it, Star Trek uniforms already look like goofy space pajamas and turning them into cardigans doesn’t earn them any fashion points. Available in Sciences Blue, Command Red, or Operations Gold, you can find all the Star Trek: The Next Generation Unisex Cardigans right here. And if you really want to kick your unfashionable holiday ensemble into warp drive, try pairing your cardigan with one of these Star Trek: The Next Generation Winter Hats. Live long and dress warm! 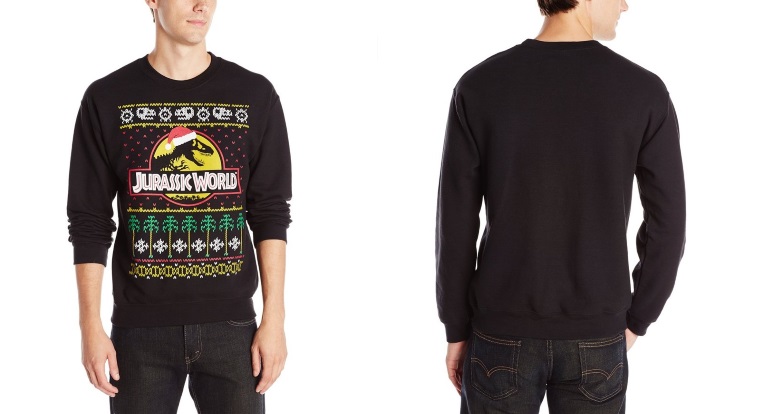 Nothing says “Happy Holidays” like a dinosaur cloning experiment gone awry! This Jurassic World faux sweater is actually a sweatshirt with a graphic that emulates the appearance of a knit garment. With an incongruous design that features palm trees, snowflakes, and a dinosaur wearing a Santa Claus hat, this Jurassic World sweatshirt is as perplexing as it is ugly. In other words, it’s perfect. You can find the Men’s Jurassic World Ugly Christmas Crew Neck Sweatshirt here. 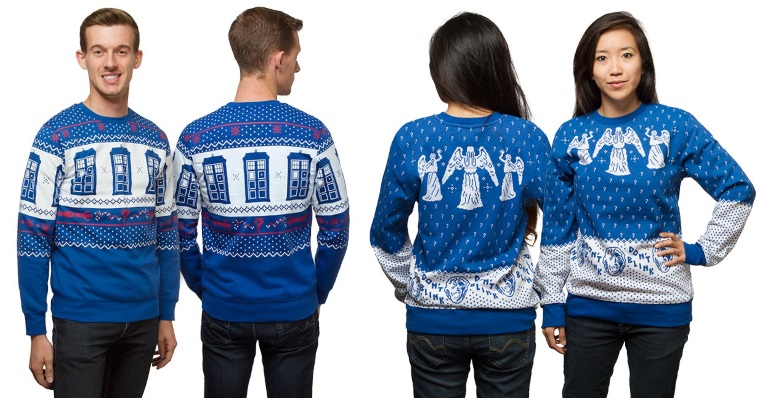 Celebrate the holidays like a time-travelling alien with one of these two Doctor Who-inspired holiday sweatshirts! Both of these sweatshirts feature faux sweater graphics that look like they were knitted by the Time Lord himself. Available in either a TARDIS pattern or a Weeping Angels pattern, the ugliness of these Doctor Who faux sweaters manages to transcend both time and space. You can find both Doctor Who Holiday Sweatshirts right here. And if you’re looking for additional gifts for the Whovian in your life, check out our list of some of the best Doctor Who gifts currently available. 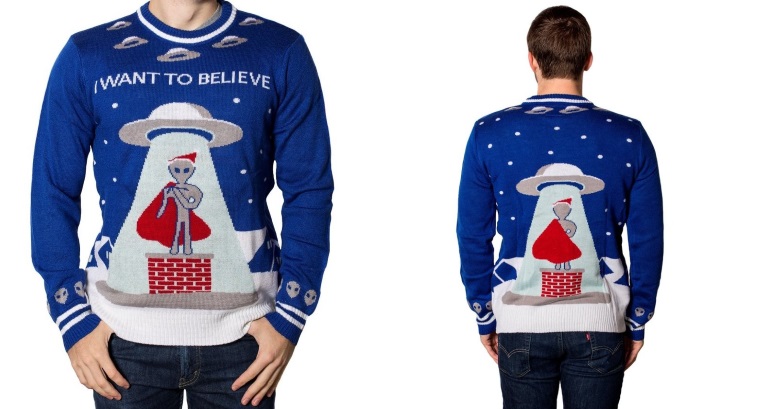 The X-Files, the 1990s cult sci-fi show that convinced us that the truth is out there, is scheduled to return to television in January 2016, when FOX will debut a six-episode miniseries. One of the most iconic images from the original series is a poster that shows a flying saucer above a caption that reads “I Want to Believe.” The I Want To Believe Ugly Christmas Sweater pays tribute to FBI special agent Fox Mulder’s poster with an image that depicts a grey alien delivering gifts via a chimney Santa Claus-style. Even better, unlike most other garment graphics, the back of this sweater shows the same ugly image in reverse. You can find the Crazy Holidaze Men’s I Want To Believe Ugly Christmas Sweater here.