8 Games That Let You Choose Your Own Path

The “Choose Your Own Adventure” style of books has always been a favorite among young readers. Literary enthusiasts attain the rare ability to move from passive observer into a position of “control.” It’s no wonder that games have adopted the idea.

Developers like Bioware and Sucker Punch have woven the choice mechanic into its Mass Effect and inFamous games, employing the model of being able to chose responses and reactions events, which then dictate interactions and how a story may play-out. However, some developers have adopted the idea of the “Choose Your Own Adventure” genre more closely. Rather than muddying the tale with lots of breaks for shooting or leveling-up characters, some developers have taken to focusing mostly on telling a story with many different branches. Where multiple playthroughs can yield more information, allowing players to delve deeply into the many different ways a journey could unfold.

Of course, some games allow their users veer far of the intended path while others force you to stay a little closer to the intended direction. However, each one of the games listed below is a love letter to the paperback “Choose Your Own Adventure” that used to inspire us to explore the different roads we might take if we were stronger, smarter, more devious, and so on. should look like for visual, interactive media. Check out the full list below.

From the beginning of the game, players have the option to go on an adventure or stay within their lonely, familiar cubical and forgo all possibilities. This options is the first of many decisions players will be presented with in the walking choose your own adventure game. Players also have lots of options as a bodiless narrator will egg you along one of the stories many paths. Users can chose to ignore everything he says, some of what he says, or comply with everything he says.

The first go-through of the game’s story won’t take long, but it’s the hours of exploring the multitude of choices and outcomes that are most exciting. 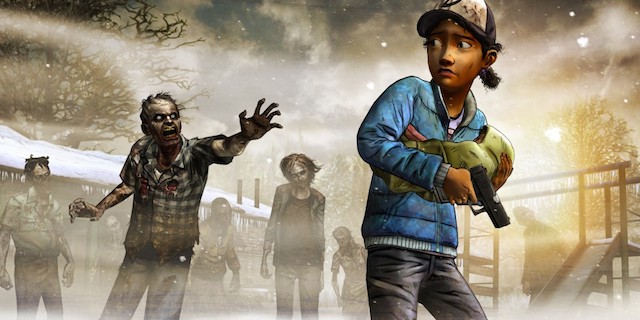 Season 2 offered up more diversity in its endings compared to Season 1 of the series. Players will feel especially compelled to replay various choices to see how interactions and key moments in the story play-out. However, it’s heart-wrenching to know that some things in this brutal world are inevitable. Oftentimes, players will believe that there are cases where they can outplay death. In some instances that’s true, in others, it’s less so.

Like the Stanley Parable, The Walking Dead gives control and the illusion of control. But in this brutal world, the lasting truth has always been if you’ll be able to live with decisions you’ve made — no matter the outcome.

Analogue: A Hate Story sets players up to solve a mystery by navigating through the personal logs of a colony that has been long-dead. The game is set up as an interactive narrative where players must talk with the computer system’s two AIs in order to get new clips of information surrounding the deaths of these crew members on the Mungunghwa starship.

Players will pour over text logs that read-out like a soap opera tabloid — offering new information every five minutes that will undoubtedly keep most players hooked. Interactions with the AIs amount to Yes and No choice responses (because of a “system malfunction”). But each of the AIs offer polarizing views of the events uncovered by the player, and help bring a different dynamic to what would have otherwise been a basic novel.

A retelling of the classic novel Around the World in 80 Days by Jules Verne, the game 80 Days sets players in the role of Passepartout, the French assistant to the English gambler Phileas Fogg. As Passepartout, players set out on an adventure to guide your Master on the fastest route all the while maintaining his health, finding faster means of transports, and keeping tabs on funds.

The game presents a cool, stylized version of the tale in a chose-your-own-adventure novel that allows players to interact with various world citizens you’ll meet along the way. These interactions have the opportunity to offer players with new paths for their journey or interesting perspectives on the history of the time.

The words, accompanying sound effects, and minimalist visuals make for a vivid telling of the tale. One player’s Passepartout could be a wild explorer — never satisfied with just staying in the hotel room while visiting a strange new country — or another’s could be methodical, always thinking of the next best move to get back to London before time runs out.

It’s a wonderful way to tell the tale with so many options to explore that players will undoubtedly want to replay with a new path in mind.

Ever want to know the crushing strain of living with depression? Depression Quest offers an unusual opportunity to peek into the life of someone living with depression through this text-based, interactive story. Will you attend a party or stay at home? Or should you work at your desk or retreat into the safety of your bed? While the options seem rather dull, the reality is these kinds of decisions weigh heavily on your character.

The lifestyle and reactions of the main character may seem over-the-top to those who have never experienced the debilitating disease themselves. But if players open their minds and empathize, users will have the opportunity to understand.

Hatoful Boyfriend is a dating simulation meets visual novel where players get to romance pigeons. Users play as a human going to an all-bird academy. It’s the protagonist’s second year at the school, so the shock of a human being let into such an exclusive establishment has simmered. However, this year is the time for romance.

Behind its silly facade beats the heart of a smart, well-written story with a cast of charters that will move players to go through the plot’s many choices several times over to romance the eight dateable birds. The game takes about an hour to complete, so it’s easy to get sucked into playing another round to uncover the mystery behind another dateable bird.

Yes, dating birds as a human sounds a little weird, so the game does give players the option to see their “human forms” to help make the stock bird photos (and their characters) more relatable. It presents a strange front, but the dialogue and mystery surrounding each of the available pigeons’ plot lines adds great replay value.

Junpei, the protagonist, awakens to find himself and eight others on board a slowly sinking ship. You and the other “participants” have been kidnapped to play a sadistic game where the objective is to find a door with the number nine label. Find the door and earn your freedom. But there’s a catch, the group has nine hours to find the door, all the while trying to hold it together as personalities clash and the reality of the situation stresses the group to its metal limits.

The game features visuals, sound effects, and music that add to the atmosphere, accompanied by (often) graphic descriptions. Consumers that choose the iOS version will see the weight of their choices in the doors they’re forced to choose and by pairing off with different people in the group to glean more information about their dire situation. DS users on the other hand will be treated to puzzle games and conversational choices to break up the blocks of reading time.

Players will be posed with seemingly random gut decisions (i.e. which door to open), which will have ripple effect throughout the rest of the story. By the game’s completion, players will have the option to try again as there are six different endings to achieve. Multiple playthroughs may benefit players, as they’ll be able to puzzle together the conspiracies and mysteries of the ship and what connects the other “participants.”

After that there’s always the follow-up: Zero Escape: Virtue’s Last Reward for the 3DS and Vita.

8. Creatures Such As We

This text based video game most resembles the interactive paperback novels of old, giving players a story and choices that range from conversational to minor conflict resolution to romantic decisions. The game begins to unfold as if you were reading a digital story through Apple’s iBooks. The pages turn and each page offers a new path to take.

The story revolves around a video game the main character plays obsessively in his/her off-hours — a game within a game, if you will — while living on a moon base. The game dives into how people cope with the loneliness they face and the philosophical discussion of how games tie into our everyday lives. It’s a thoughtful exploration about our human nature to want for companionship and the lengths we go to ease the pain of loss.