Get more out of Windows 10 by learning these hidden tricks and shortcuts | Source: Microsoft

Many of us have had Windows 10 on our PCs for a while now, so we’re pretty used to the new features of the operating system from daily use. But whether you’re using the PC you’ve had for years or upgraded to a new device that was Windows 10-ready out of the box, you might find it useful to learn some of the tricks that Microsoft has hidden underneath the hood. Give these tips and tricks a try, and improve your Windows 10 experience.

Windows 10 has a hidden Start Menu that contains some useful tools for Windows power users, such as the task manager, command prompt, device and disk management, and others. To get to this menu, you’ll need to either right click the Windows button or use the Windows key+X shortcut on your keyboard.

A useful feature of both iOS and Android is one within their settings apps that allows you to monitor the amount of disk space that your apps are taking up. Microsoft introduced a similar tool in the new Settings app in Windows 10. To find it, click Settings, then System, then Storage. You’ll be able to sort by drive and search for specific apps by file name so that you can figure out which apps are taking up the most space.

3. Quickly minimize all windows except the active one

The “Show Desktop” function has been around since Windows 95, but up until now, there was no way to just minimize all windows except the one you’re looking at. In Windows 10, all you’ll need to do is to grab the window by its title bar and give it a shake. All inactive windows will minimize.

Another mobile OS-borrowed feature is options within Settings to control which apps can run in the background. That might not sound like a big deal, but if you’re tethering your laptop to a mobile hotspot with a data cap, it can save you a lot of headaches and wasted data — and possibly conserve a little battery life, too. To choose what apps you’d like to allow to run, go to the Settings app, then Privacy, then Background Apps. Then you’ll see a list of installed apps, and you can decide which ones can run in the background. 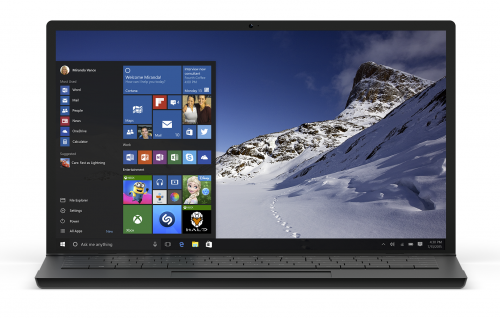 Start Menus become bloated as we add more and more applications to our PCs, but that doesn’t mean that the process of finding and opening the app you want has to slow down. After opening the Start Menu, click “All Apps.” You’ll see letters that you can click on; click the first letter of the name of the app you’re looking for, and the app should appear in the tiles to the right. To be more specific, you can even search for apps from the search box, too.

I personally have loved the print to PDF feature of Google Chrome, as it’s been a staple of Google’s alternative browser, and users of OS X have also enjoyed it natively across the operating system for quite some time. Now in Windows 10, “Print to PDF” is a native option across the entire operating system. You can access this from any print dialog.

ExtremeTech provides a list of new keyboard shortcuts which we think you should be aware of too. They’ll make navigating Windows 10 much easier, and each one uses the the Windows Key plus an additional key or two:

[Update 1/2/17: The “Cortana listening” shortcut has been changed from Windows Key-Ctrl-C to Windows Key-Shift-C]

Microsoft has made a concerted effort in Windows 10 to bring the trackpad gestures that users have grown accustomed to with OS X. If you’re a Mac user, then all the gestures you’re used to — like pinching to zoom or using two fingers to scroll up and down — will work similarly in Windows 10.

In addition to those gestures, there are a few added gestures that are Windows 10-specific. Swipe three fingers up and you’ll see the task view; to the left acts like Alt-Tab, and down accesses the desktop. Tapping three fingers on the trackpad brings up Cortana, and tapping with four fingers brings up the Action Center.