There are countless new smartphones and PCs vying for your attention when you’re in the market for a new gadget. And if you’re like most shoppers, you probably already know which brands you’re considering before you even get to your local electronics store, or fire up Amazon’s website. It’s hard to keep up with all the new devices that are unveiled at events around the world each season, but particularly if you’re shopping for a new computer, you might want to pay attention to the devices that Acer just announced at a press event in New York.

As many companies do at any event that has the attention of the tech press, Acer went all-out and announced a wide variety of devices, including gaming notebooks, desktops, and monitors. But if you’re shopping for a smartphone or a PC for everyday use, here are the devices you should pay attention to.

The Liquid Zest Plus is a mid-range smartphone with a 5.5-inch display and a 5,000mAh battery, which reportedly enables it to last through about two days of use. Andrew Williams points out at Ars Technica that the Zest Plus’s 5,000mAh battery is more than 60% larger than the 3,000mAh battery in the Samsung Galaxy S7. And while the Zest Plus is “distinctly a budget plastic device compared to the pricey glass and metal finish of the S7, that plastic does allow for easy access to the battery, where it’s half locked-in using a glued-on fabric mesh that keeps the contacts away from water.” The upshot? Acer doesn’t claim that the Zest Plus is waterproof, but it should be able to withstand a splash or two.

Android Authority reports that while Acer didn’t share many specifications, the phone is likely to be powered by a MediaTek processor and feature somewhere in the range of 1GB to 2GB of RAM. Williams posits that the phone likely uses a Mediatek MT6735 CPU, which is a quad-core Cortex-A53 CPU that’s comparable to the Snapdragon 410 used in an array of cheaper Android phones. While that’s an unusually low-end processor for a phone with a 5.5-inch screen, it makes sense because the Zest Plus only has a 720p display. Though the display has a pixel density of just 267 PPI, Williams reports that the quality of the display is good, and it’s not as obviously undersaturated as some mid-range and low-end phones are. Another selling point? The phone’s 13 megapixel camera, which uses three autofocus systems: laser, phase detection, and contrast detection.

While the phone isn’t exactly an impressive device when compared to high-end flagship devices, its sub-$250 price tag and its massive battery could make it a great choice for shoppers who want an affordable device that still offers excellent battery life. Additionally, the Zest Plus’s UI looks very close to stock Android Marshmallow, which can’t always be said for mid-range phones that would otherwise be strong contenders.

The Switch Alpha 12 is a two-in-one laptop, with a kickstand and detachable keyboard that are reminiscent of Microsoft’s Surface Pro 4. But unlike many other Surface Pro clones, this hybrid backs up the design with some impressive specifications. The device is the first fanless 2-in-1 to be powered by Intel’s sixth-generation Core i Skylake processors, which is accomplished with a closed-loop liquid system that cools the computer. The liquid cooling system enables the fanless design, and Acer says that the system is both reliable and silent. As Dan Seifert reports for The Verge, liquid cooling isn’t entirely unprecedented, but it’s still fairly uncommon, and is an interesting way to keep the hybrid cool without the noise you typically get with fans.

The 12-inch screen features a 2,160×1,440-pixel resolution, which CNET’s Dan Ackerman points out isn’t quite as high as the Surface Pro 4’s, but is in the same ballpark. The keyboard, which is detachable, ships as a free accessory with the device — unlike Microsoft’s version, which costs an extra $129 no matter which model you buy. A larger, backlit keyboard will also be available as a separate purchase. A tablet mode enables you to use the touchscreen and kickstand together, and you can also use the optional Active Pen. The device, which will go on sale in June, will start at $599. Seifert notes that the Switch Alpha 12’s low price is apparent in the laptop’s build quality, as it’s not as elegant as the Surface Pro 4.

The Aspire S 13 is a Windows 10 notebook designed to appeal to creative types, and is said to be one of the thinnest laptops in its class. It features Windows 10, Core i3, i5, or i7 Intel processors, up to 8GB of memory, and 512GB of storage. The device’s 13-inch, full HD (1,920×1,080 resolution) display will be available either in a 10-point touchscreen version or a model without a touchscreen. The computer’s USB ports include a reversible Type-C port and a USB 3.0 port.

Valentina Palladino reports for Ars Technica that the notebook is direct competition for HP’s recently-announced Spectre laptop. The S 13 measures .57 inches at its widest point and weighs 3.13 pounds, larger and heavier than the .4-inch, 2.45-pound Spectre. But Palladino notes that the “S 13 is literally day to the Spectre’s night, featuring a pearly white aluminum chassis with diamond edges and a metallic coating on its hinge.” And while the biggest selling point of the Spectre is its design, Acer’s S 13 “wows with price,” according to Ars Technica. The Aspire S 13 will be available in May starting at $699, which makes it much more affordable than the $1,169 Spectre. Another point where the S 13 compares favorably to the Spectre? While HP expects the Spectre to get around 9.5 hours of battery life, Acer expects the non-touch version of the S 13 to get up to 11 hours of battery life.

Acer announced the latest in its lineup of Chromebooks: the Chromebook 14 for Work. Dan Seifert reports for The Verge that it’s the company’s first model compliant with Google’s Chrome for Work program, and it’s reportedly the fastest Chromebook on the market. Another plus is the rugged design, which includes a scratch-resistant screen and a spill-resistant backlit keyboard. Sean Portnoy reports for ZDNet that the device can also survive drops up to 48 inches, and the device meets MIL-STD 810G military-grade standards for durability.

The Chromebook 14 is powered by a sixth-generation Intel Core i processor, and will offer battery life of up to 12 hours. The device fits a 14-inch display — with either 1,366×768 or 1,920×1,080 resolution — into a chassis designed for a 13-inch screen. The idea is to keep the device small and portable, but in Seifert’s estimation, it doesn’t keep the Chromebook 14 for Work from being chunky and clumsy. The device also features a lid made of Corning’s new Vibrant Gorilla Glass, which provides a durable glass finish but picks up fingerprints very easily.

The Chromebook 14 for Work will start at $349, which means it’s competitively priced against budget Windows laptops, though Acer hasn’t said how much higher the price goes if you opt for 8GB of RAM or a more powerful core CPU.  Seifert notes that given the fact that it’s targeted toward the enterprise market, you may not be able to purchase one of these. 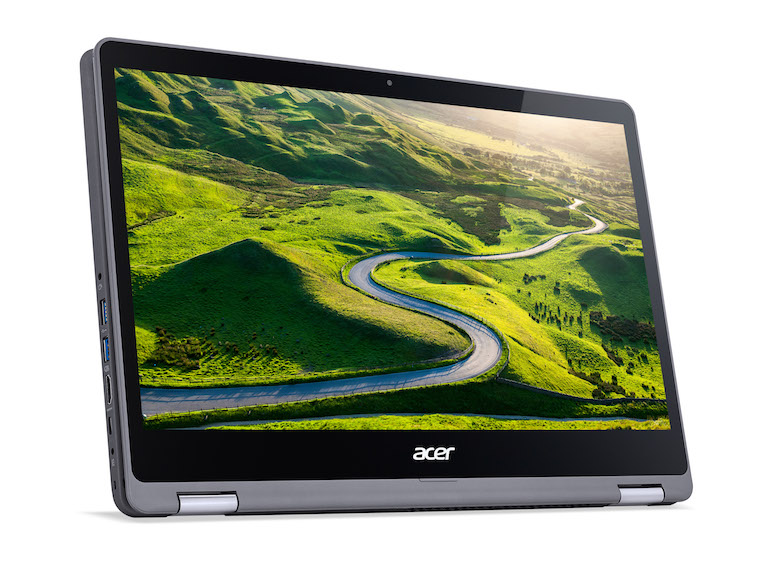 The R 15 is a thin convertible laptop with a full HD 15.6-inch IPS display, a glass fiber body, and a metal lid. It’s available in a variety of configurations that include sixth-generation Intel Core processors with up to 12GB of DDR4 memory, Nvidia GeForce graphics cards (configurable up to GeForce 940MX), and a USB Type-C port. According to Gizmo Times, the metal lid is accompanied by a lower casing made of 40% glass fiber and silver particles.

In addition to all the features of Windows 10, the R 15 also features Acer’s ExoAmp Antenna technology to improve connectivity. And like the S 13, the R 15 features Acer TrueHarmony and Dolby Audio, which reverses audio channels according to the orientation and mode of the device — a useful feature for a convertible laptop.  The device will be avaailable in May and start at $699.