We’re big fans of affordable phones. The list of our favorite Android phones of 2016 includes some pricey flagships, of course. But it also includes a few picks that come in under the $300 mark. We’ve taken a look at smartphones that cost under $100 — a price tag that sounds impossibly low, but can actually get you a phone that’s great for basic tasks like calling, texting, and web browsing.

With the holidays coming up, you’re probably shopping around for gifts for your friends and family. An affordable phone is a great gift. It’s almost universally well-received by teens or tweens hoping for their first phone. It’s also a fun present for a parent, grandparent, or another adult who needs a little push to upgrade from a feature phone to a smartphone.

We’ve collected our favorite affordable phones for the holiday season. Some of them have appeared in our recommendations before, while others are new additions to our wish lists. All of them cost $300 or less — perfect for gifting this holiday season.

This ASUS phone is great quality and an even better price | Asus.com

The ASUS ZenFone 3 lineup includes the ZenFone 3 Laser, a $199 model that offers a great deal and 32GB of storage. Aloysius Low reports for CNET, “The ZenFone 3 looks like an iPhone and Samsung Galaxy S7 hybrid and feels especially premium compared to other phones that stick with metal or even plastic builds.” With a 5.5-inch screen, dual 13MP/8MP rear camera, Snapdragon S430, 2GB of RAM, and 32GB of storage, it’s a strong contender for the title of best Android phone under $300. Its affordable price tag and surprisingly premium feel also make it a great choice for a holiday gift.

The BLU Pure XR is perfect for those looking for an inexpensive phone | Amazon.com

The BLU Pure XR is a $299 flagship phone that got some attention for bringing a 3D Touch-like feature to Android. Andrew Dalton reports for Engadget that this “feature-heavy” device features a 5.5-inch 1080p SuperAMOLED screen, plus Android 6.0 Marshmallow, a 2GHz octa-core MediaTek Helio P10 processor, 4GB of RAM, and 64GB of memory. It also features a 16MP camera, a fingerprint sensor, and a 3,000mAh battery.

It doesn’t get much cheaper than the Blu R1 HD, but the specs aren’t that great | Amazon.com

If you need a seriously budget-friendly phone and don’t mind some caveats, then the Amazon-exclusive BLU R1 HD may be a great choice. It starts at $49, which should make it pretty obvious that you’re looking at low-end specs (a 5-inch screen, an 8MP camera, a 1.3GHz quad-core processor, 8GB or 16GB of storage, and 1GB or 2GB of RAM). The cheap price tag comes in exchange for Amazon deals and product recommendations appearing on the lock screen. But if you can tune the ads out, Jessica Dolcourt reports for CNET that the R1 HD is “a tempting deal for anyone looking for a cheap smartphone that does the essentials.”

Get a great deal on the LeEco Le Pro 3 while you can | Lemall.com

The LeEco Le Pro 3 isn’t always available at the $300 price point, but flash sales lowering its price tag to that range have been frequent enough for us to include it. Matthew Miller reports for ZDNet that the Le Pro 3, which is priced at $399, offers “fantastic” battery life that can get you through two full days of usage. It also features the fastest Qualcomm processor available, an “ample” 4GB of RAM, stereo speakers, and an aluminum unibody build. The 1080p display doesn’t match the resolution of more expensive phones. But Miller reports that the screen is crisp and clear, and the resolution contributes to the long battery life. Look for a flash sale that knocks $100 off the price tag and you have a strong contender for an affordable phone.

The LG Stylo 2 is a great find| Bestbuy.com

The LG Stylo 2 is surprisingly affordable ($179 full price) for a phone its size (it has a 5.7-inch screen). Ajay Kumar reports for PC Magazine that this device offers a surprisingly slim and lightweight build given its phablet form factor, and it makes good use of an embedded stylus. It also offers “solid battery life,” and while it may not match the screen sharpness or the performance of higher-priced phones, it does offer a Snapdragon 410 processor clocked at 1.2GHz and 2GB of RAM. It may not be the best phone for gamers, and it’s certainly packed with more bloatware than would be ideal, but given its low price tag, it can be a great choice if you’re searching for an affordable phablet.

The Moto G4 has a large screen and water-resistant design | Motorola.com

If you’re looking for the best Android phone at a budget-friendly price point, it’s hard to beat Motorola’s Moto G4. The device starts at $199, and Andrew Hoyle reports for CNET that a “big, bold screen, water-resistant design and rock-bottom price” make the Moto G4 “a dazzling deal.” The fourth-generation Moto G builds on the successes of previous iterations, with a bigger and brighter 5.5-inch full HD display and faster octa-core processor, plus water resistance and expandable storage. You can spend a little more for the G4 Plus and get a fingerprint sensor and a slightly better camera, or spend a little less for the G4 Play and forego the big screen and faster processor. But we think that the Moto G4 hits the sweet spot in terms of features and price.

The Nextbit Robin is regularly priced at $399, but its recent sale prices edge it right into budget territory at $299. This isn’t quite your standard smartphone, so if you’re considering it as a gift, make sure that you’re giving it to somebody who’s at least a little bit tech-savvy. What makes the Robin different from other smartphones is its what CNET’s Jessica Dolcourt characterizes as a “novel cloud storage concept.” (A feature which, she advises, isn’t quite “seamless enough for the masses.”) The device can temporarily archive apps and photos online to make space in local storage. It also features a minimal design, plus Android 6.0 Marshmallow, a 13MP camera, 3GB of RAM, and a 1.4GHz hexa-core Qualcomm Snapdragon 808.

The ZTE Axon Mini 7 is a pretty great reason to get familiar with this Chinese smartphone manufacturer. Julian Chokkattu reports for Digital Trends that this $300 smartphone “is a kickass little phone.” It features a 5.2-inch AMOLED screen, an octa-core Snapdragon 617 processor, 3GB of RAM, and 32GB of internal storage. This device also features a 16MP camera and a 2,700mAh battery. According to Chokkattu, the ZTE Axon Mini 7 offers “the best of all possible smartphone worlds: uncompromising hardware at an affordable price.” 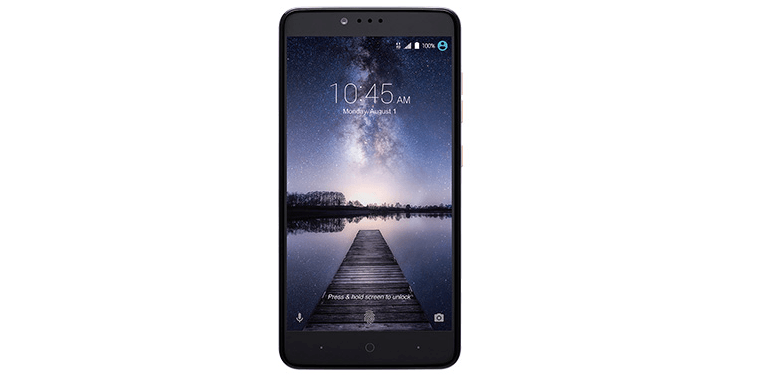 This ZTE phone features a large screen and impressive specs for the price | T-mobile.com

The ZTE ZMax Pro is another ZTE phone with an impressive price tag. This smartphone costs just $100, and CNET’s Lynn La notes that despite that low price, this model features a solid build and an “expansive” screen. It’s equipped with a (big) 6-inch screen, a fingerprint reader, a 13MP camera, and Android Marshmallow. The ZMax Pro features a Snapdragon 617 processor, which La reports is “enough to power the phone comfortably,” plus a massive 3,400mAh battery. At its launch, it was only available through MetroPCS, but it’s now also available through T-Mobile.