All You Need to Know About Microsoft’s Surface Book

Microsoft surprised the tech community at its recent press conference by unveiling the Surface Book, the company’s first attempt at a more traditional laptop. The Surface Book combines the features that made its Surface Pro tablets popular — such as the ability to run a full version of Windows — with features that some traditional laptop users need that may have prevented them from considering the tablet devices like the Surface RT.

The laptop’s display measures in at 13.5 inches, over an inch larger than the newest Surface Pro 4 tablet and almost 3 inches larger than previous models. It also has about twice the screen resolution of previous Surface devices, aiming to compete with Apple’s MacBook Pro line and high-end displays.

The Surface Book also includes more storage space, and an Intel Core i5 or i7 processor depending on the model you select — all features that you’d find on a traditional laptop, as opposed to a tablet. Where it differentiates itself is in its versatility: It can be used as a traditional laptop, or detached or flipped for use as a tablet.

With these additional features comes a premium price: The cheapest configuration sets you back $1,499. It is worth it? We’ll take a look at what you need to know about Microsoft’s latest device.

We’ve already compared some of the specs to previous Surfaces and shown what a drastically better device the Surface Book is. It does seem as if Microsoft intends for this device to cater to the person looking for the versatility of a tablet, without sacrificing the power of a traditional laptop.

Compare the amount of RAM for example. Previous Surfaces had either 2 or 4GB of RAM, which puts them in line with the average tablet. The RAM in the Surface Book is four times that (8 or 16GB) — this is more than sufficient for not only basic computing but also more intensive applications like video editing.

Indeed the Surface Book includes a separate graphics processor in higher end models, something you’d want for not only gaming but better performance in other applications like video and photo editing (Photoshop, for example). If that’s what you think you’d do, opt for these models. 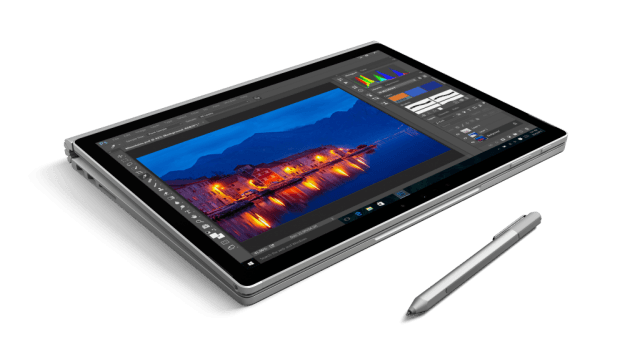 The Surface Book holds true to its tablet roots in allowing you to detach the screen itself from the keyboard completely or flip it around to use the keyboard like a stand (see the photo above). The Surface Book also works with touch input and comes packaged with a stylus like previous Surfaces have.

You’ll also find 2 USB ports and a MicroSD slot, and a Mini DisplayPort that allows you to connect to a traditional desktop monitor. All storage drives in the Surface Book are solid-state based, meaning they use flash memory for storage. This is a better option as SSD drives can access data faster than traditional hard drives, and sizes of up to 1TB will be offered.

The device runs a full version of Windows 10 and includes a 30-day free trial of Office. That’s somewhat of a disappointment considering the Surface Book’s price, but one of the few negatives we can find.

(For more specific specs, see Microsoft’s page on their website.)

As we said at the beginning, the base model Surface Pro is $1,499. This includes a 128GB drive, 8GB of RAM and an Intel Core i5 processor with integrated graphics. Upgrading to the 256GB drive is an additional $200, and another $200 on top of that if you want the dedicated graphics processor instead. Beyond that you can get two core i7 processor models: one with 256GB of storage for $2,099, and another model with 16GB of RAM and 512GB of storage for a staggering $2,699.

At least at the moment 1TB models aren’t available for pre-order (shipping begins October 26), but we’re willing to bet these models will easily surpass $3,000 when they go on sale later this year.

If you’re in the market for a higher end laptop, Microsoft’s Surface Book is certainly a worthwhile contender. Its features and specs stack up pretty nicely against the MacBook Pro, which seems to be the type of laptop buyer Microsoft’s targeting. At most of the price points, they’re fairly close to the MacBook Pro in terms of specifications.

That said, if you’re not a power user, it’s hard to justify the Surface Book’s additional cost. Microsoft, along with the launch of the new Surface Book and Surface 4, dropped the cost of its older model to $499, so that’s a better option if you’d like a laptop-like device with tablet portability.

Do remember though, if you choose a tablet-based Surface instead, you’ll need to purchase the keyboard ($130) and stylus ($60) separately. This may put it out of your price range, and you may be able to find a lower end tablet with the capability to swivel the display to give you that tablet-like functionality.

Either way, it’s hard not to be impressed with Microsoft’s first true laptop — if you can afford it.