Heidi Klum has a thing for Halloween. So much so that the German-American supermodel has been mastering the art of the perfect — read: outrageous — Halloween costume for over 16 years. And while some of her costumes are more extravagant than others, the time (and money!) spent on her annual Halloween costumes is shock-inducing.

As far as planning goes, Klum told Us Weekly, “I always start in the summer.” And on the day of her Halloween bash, it takes hours — we’re talking like 10 hours — to get her ready. Case in point? For Halloween 2015, Klum reportedly spent 9 hours transforming herself into a very accurate Jessica Rabbit.

Find out how she did it — plus, take a look at some of her other outrageous costumes — ahead. 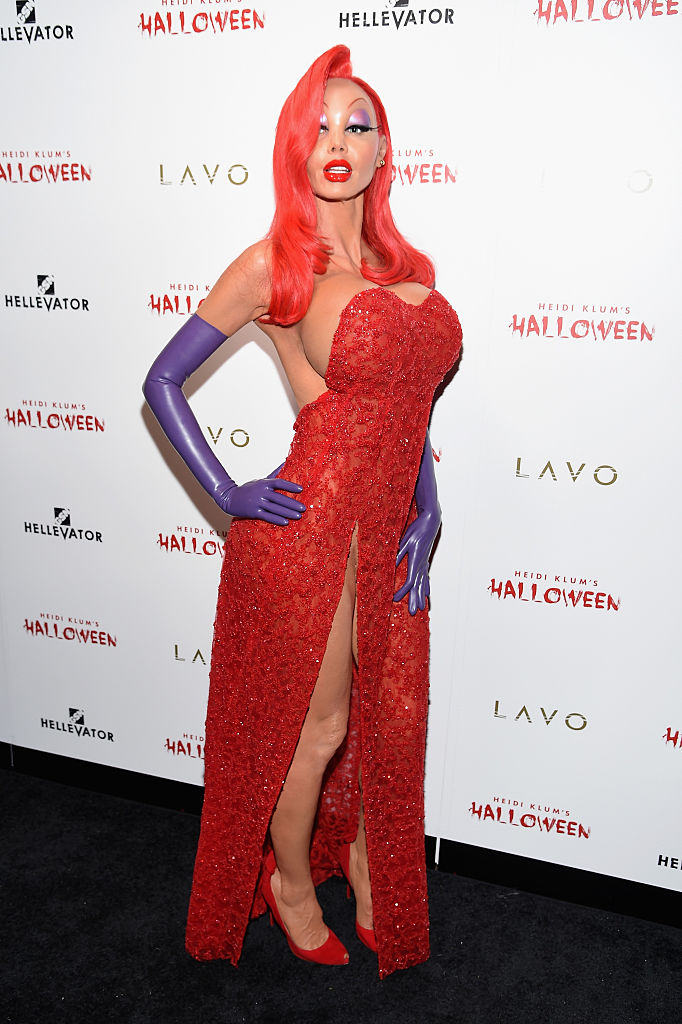 She was unrecognizable. | Nicholas Hunt/Getty Images for Heidi Klum

If you ask us, Heidi Klum’s Halloween 2015 costume was her most outrageous one yet. The supermodel spent 9 hours in hair and makeup to bring her Jessica Rabbit vision to life. From the layers upon layers of eyelashes to the prosthetic face enhancements, there was no holding back.

According to Daily Mail, Klum achieved the look with a team of professionals adding layers and layers of prosthetics to her face and body — including a rubber chest and butt. Her hair was also covered to ensure that Jessica Rabbit’s signature red locks fit on top of her head perfectly. The team completed the look with makeup and wardrobe.

As far as removing the costume goes, in an interview with Ellen Degeneres, Klum said, “When I was Jessica Rabbit and I had big boobs and a big butt and my face was all changed, I had 2-3 guys [afterwards] trying to get all the stuff off and it’s like stuck on. It’s not easy, you can’t just take it off.” 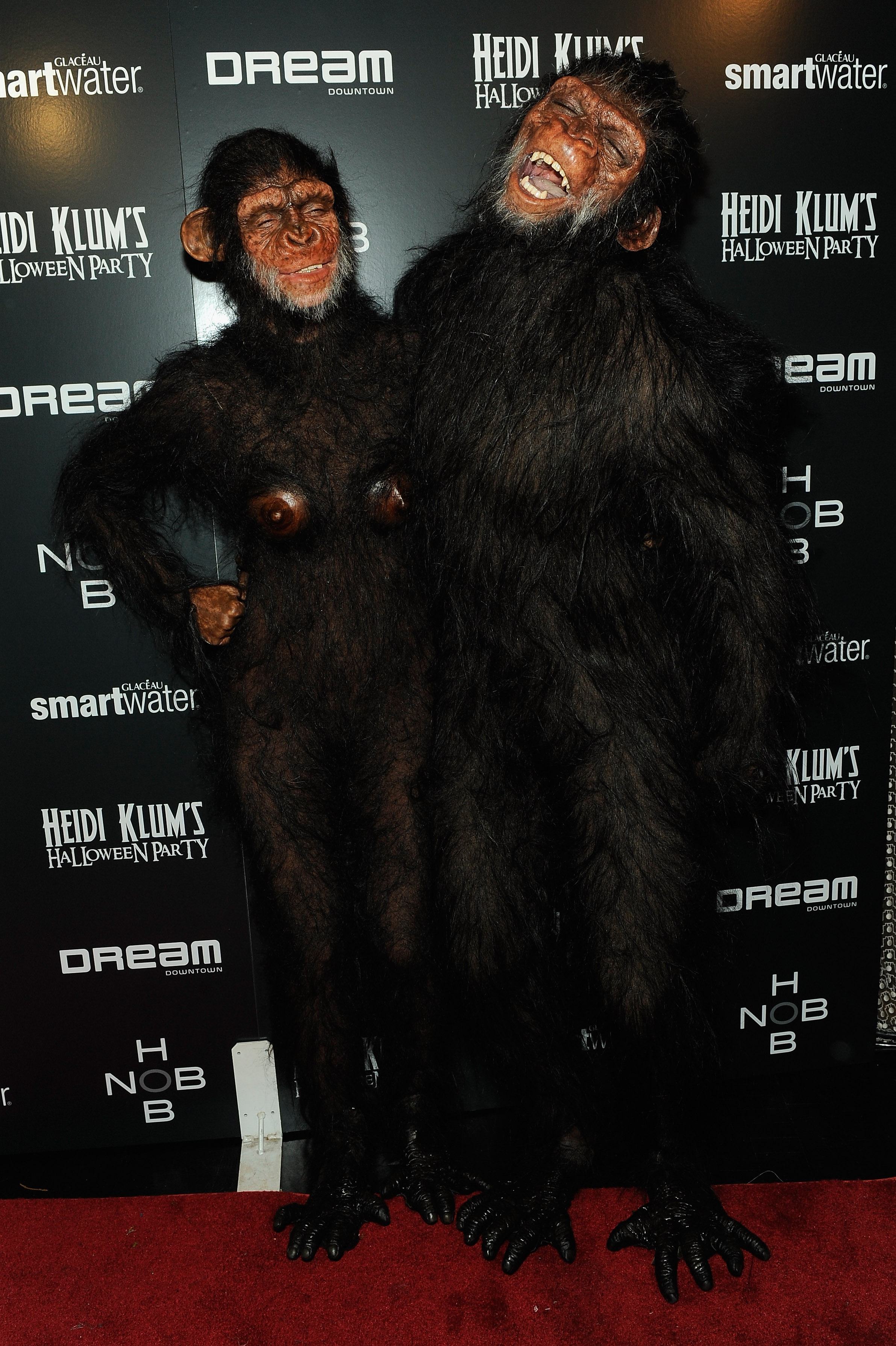 There’s no way Heidi would throw on a mask and call it a day. | Jemal Countess/Getty Images

In 2011, Heidi Klum and then husband, Seal attended her 12th annual Halloween party dressed as a couple of apes. Real, life-like apes, that is. Unlike the ape costumes you’d typically see at a party store, these featured prosthetic ears and facial details. Giving them the ultimate Planet of the Apes vibe. 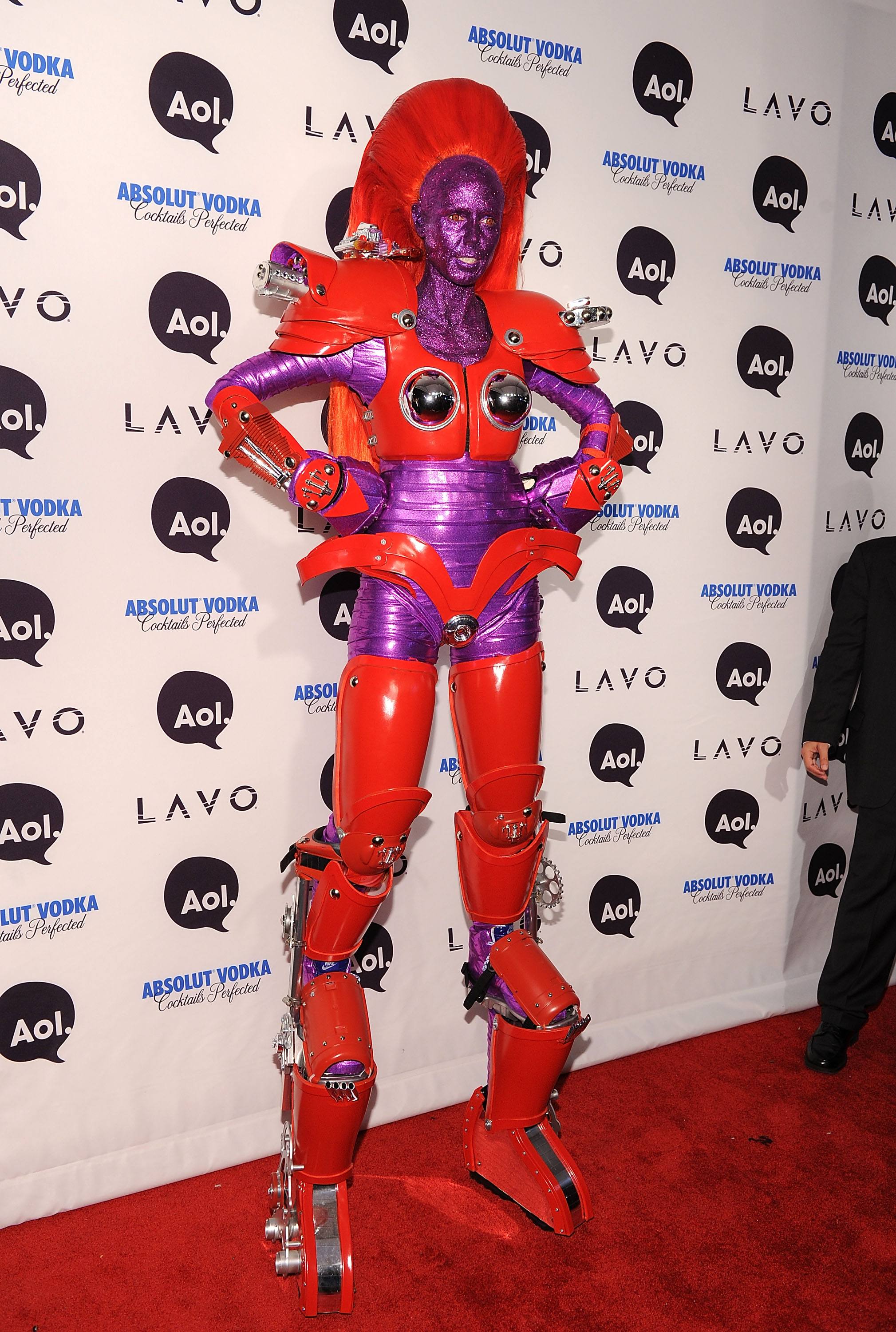 That glitter must have been a pain to wash off. | Bryan Bedder/Getty Images

If you hate glitter, this one will make your skin crawl. In 2010, Klum showed up to her annual party dressed as a giant — and we mean giant — red and purple superhero. While most of her costume was just an outfit, the supermodel took it a step further — as she does — and had her face and neck covered completely in purple glitter. 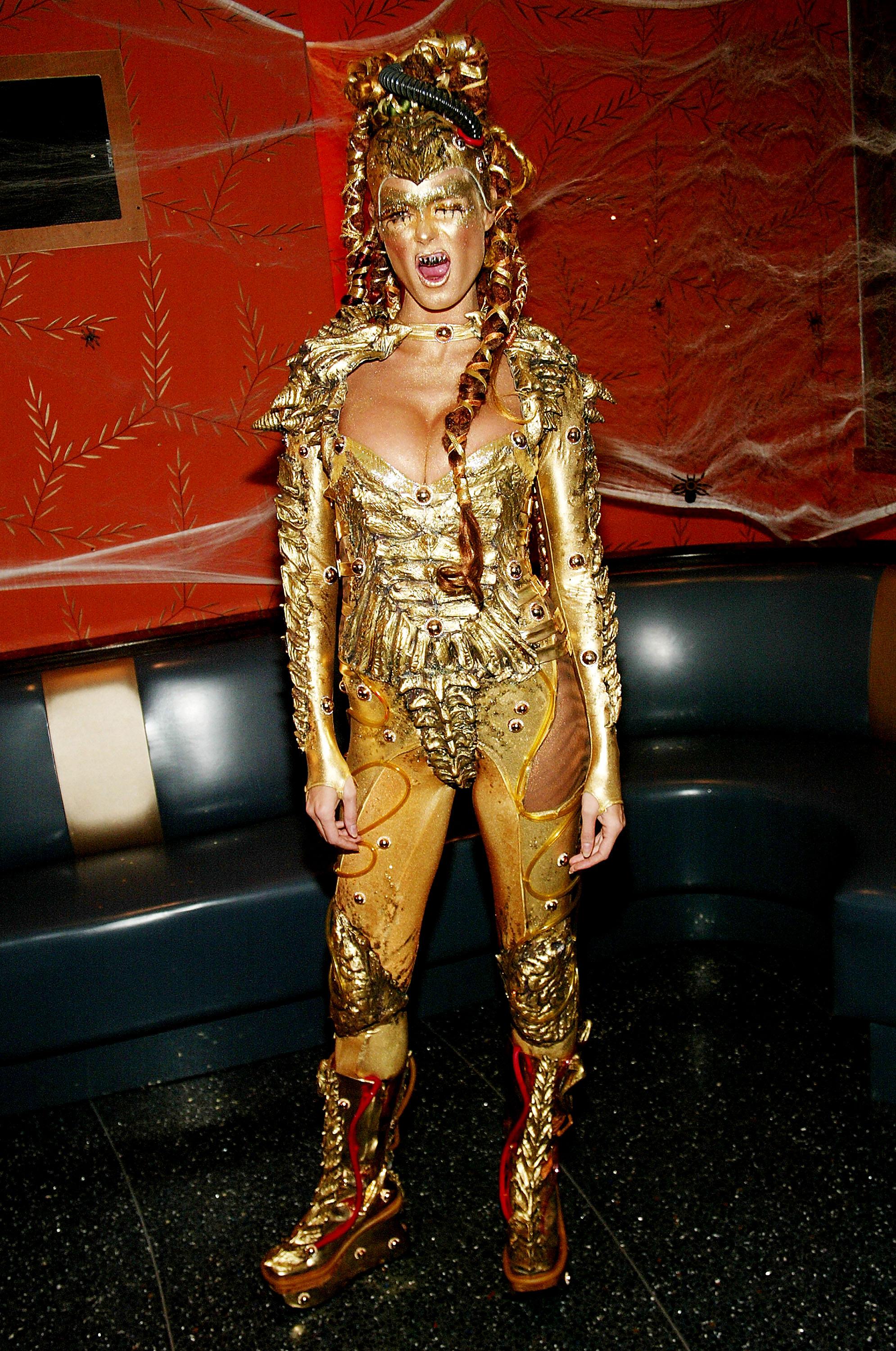 She was somehow terrifying and glamorous at the same time. | Evan Agostini/Getty Images

If aliens look as beautiful — and sparkly — as Klum’s Halloween 2003 costume, we want to meet them. From her face makeup to her hair, the supermodel went all out with this one. 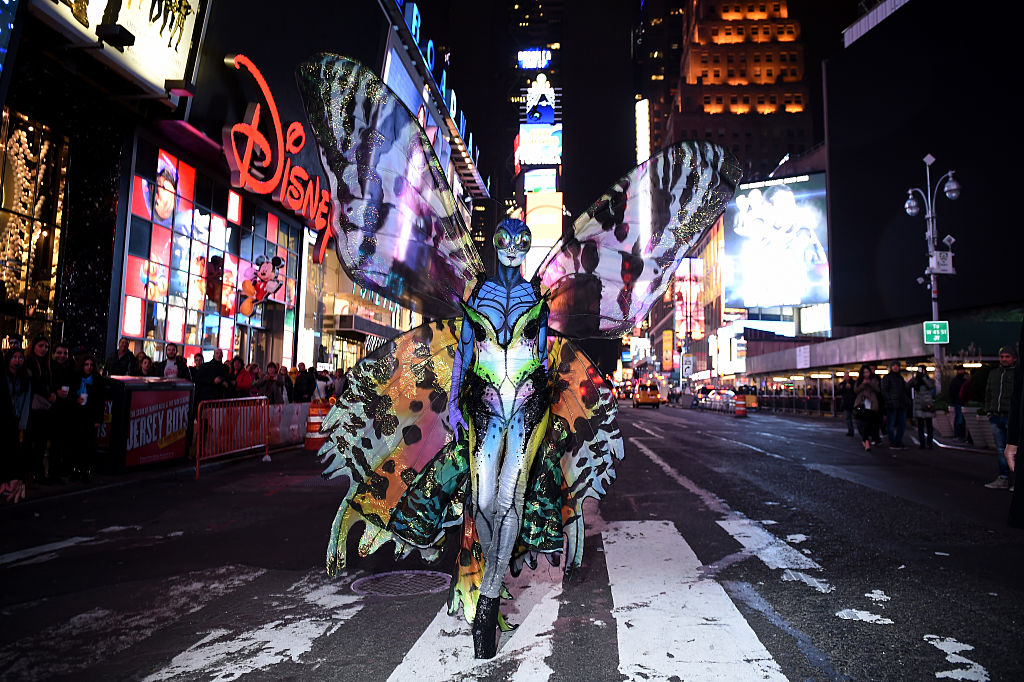 When it comes to Halloween, Heidi Klum goes all out. Case in point: The butterfly costume she pulled off in 2014. From her ginormous wings to her life-like insect eyes, Klum wowed partygoers at her annual Halloween party in New York City.

Heidi Klum goes all out in this vampire costume. | Evan Agostini/Getty Images

Leave it to Klum to create the most glam vampire we’ve ever seen. For her 2005 Halloween costume, the supermodel wore a giant — and we mean, GIANT — black wig, a sexy black leather dress decorated with a faux human heart, fishnets, thigh-high boots, and completed the look with lace batwings and fangs, of course.

And, per usual, Klum didn’t stop there. Her makeup was also on point with pale, vampire-like skin, black eyeliner, dramatic fake lashes, and red eyeshadow. 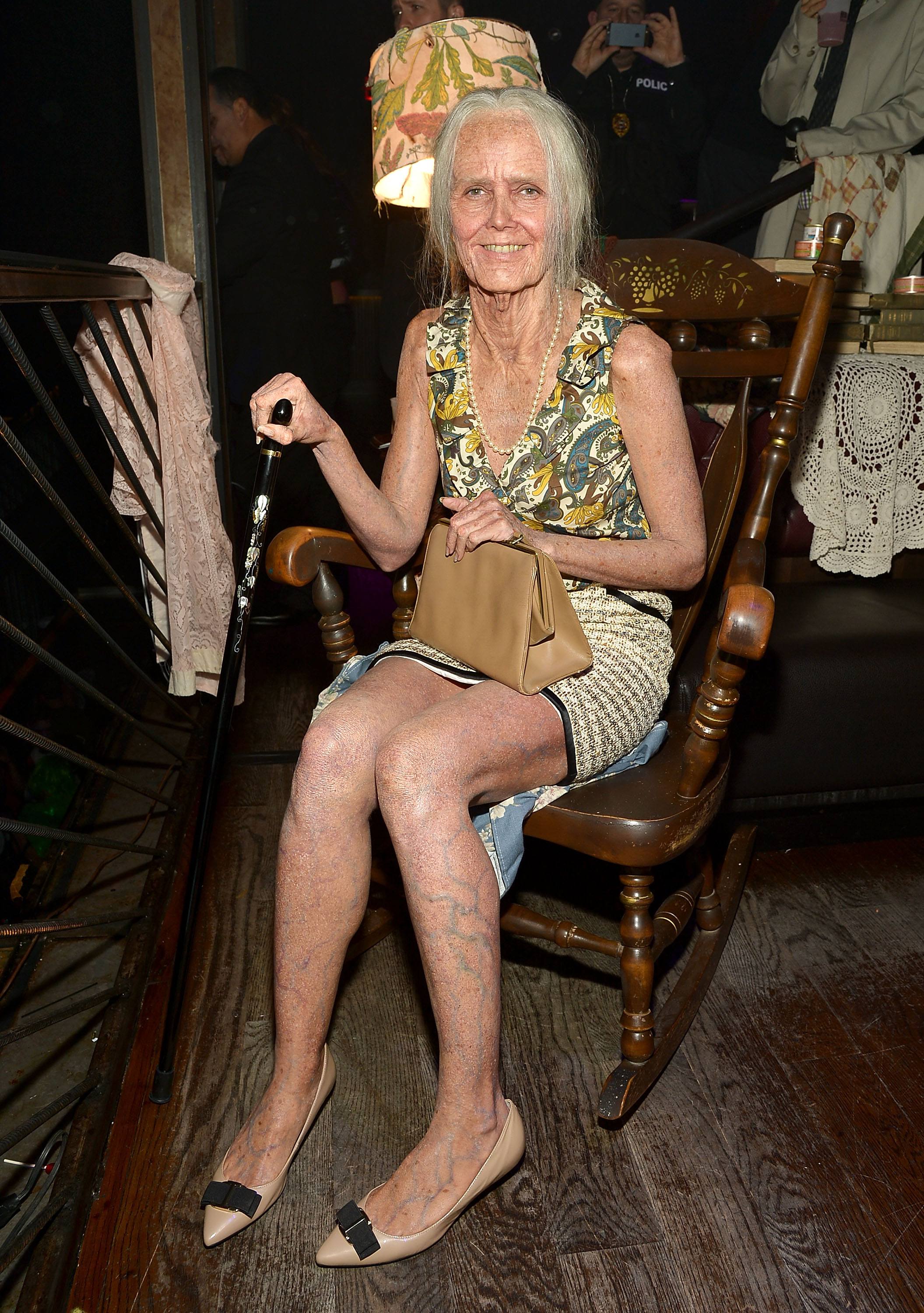 She even had the spider veins. | Mike Coppola/Getty Images for Heidi Klum

Old lady costumes are a great last-minute Halloween costume. But, Klum definitely put more thought into hers. From her gray wig to her spider veins to her life-like wrinkles on her neck, the TV host really went the extra mile on this one. She even made her teeth yellow! 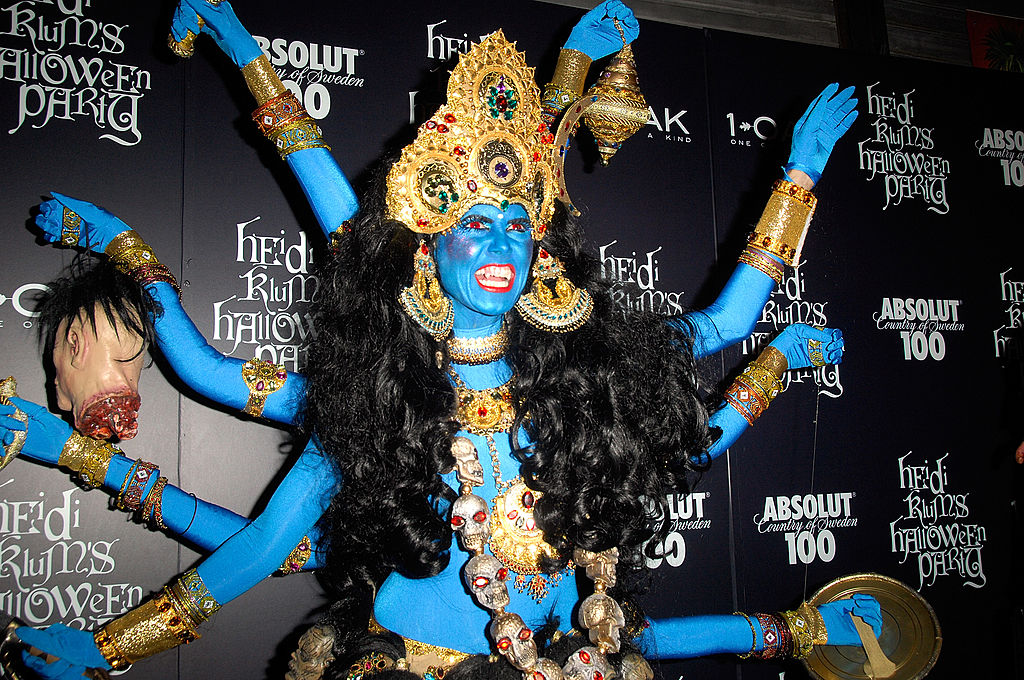 She probably knocked over a few people walking around. | Joe Corrigan/Getty Images

It wouldn’t be Halloween without Klum taking things a little too far. And in 2008 the supermodel did just that with her Goddess Kali costume. Between the blue body paint, arms, and all of her gold accessories, we can’t help but wonder how she went to the bathroom. 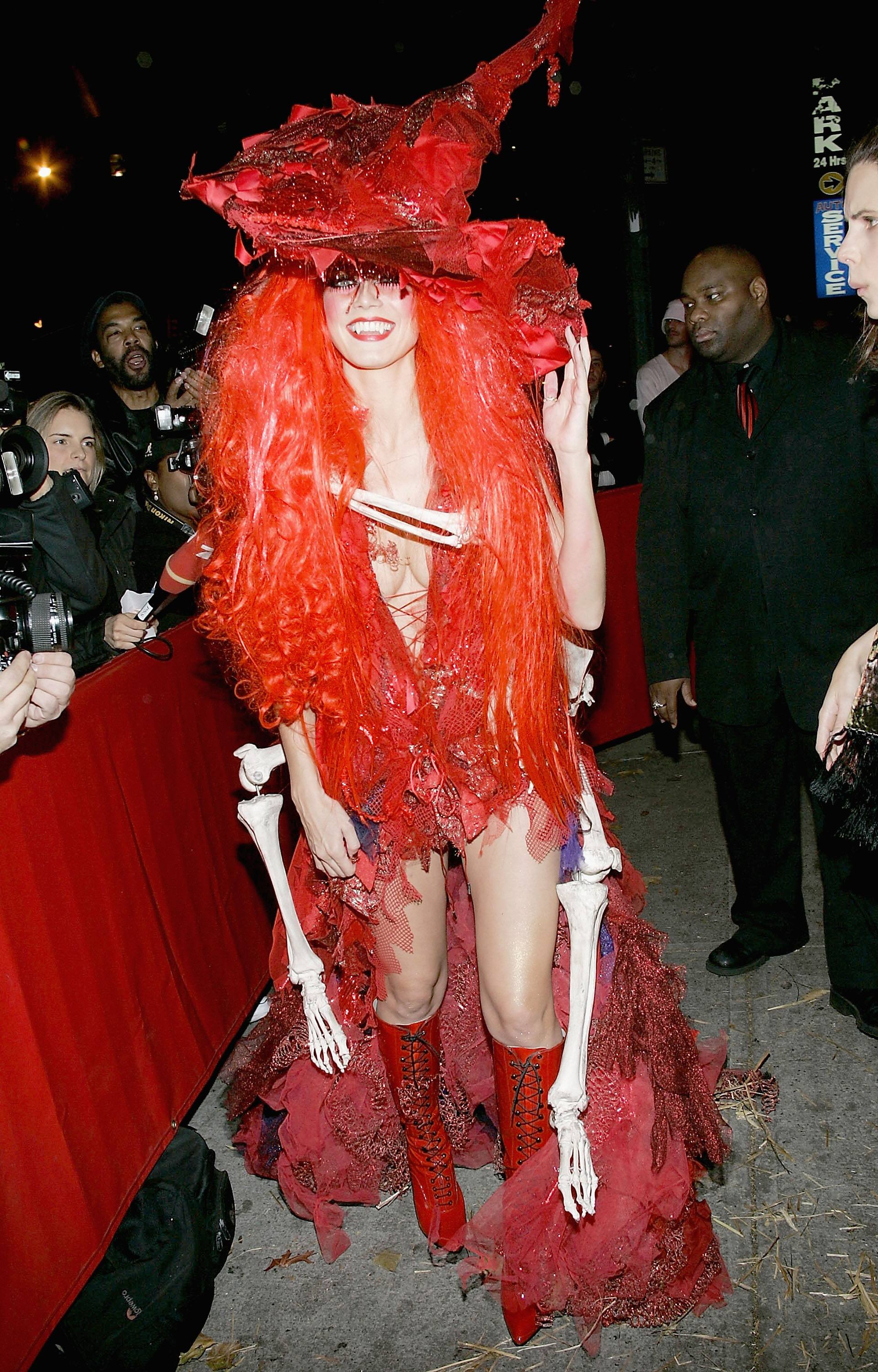 Her costumes have gotten more elaborate through the years. | Evan Agostini/Getty Images

There’s sexy witch and then there’s Heidi Klum’s red witch costume. While her 2004 costume showed off her killer body, it was also completely terrifying! 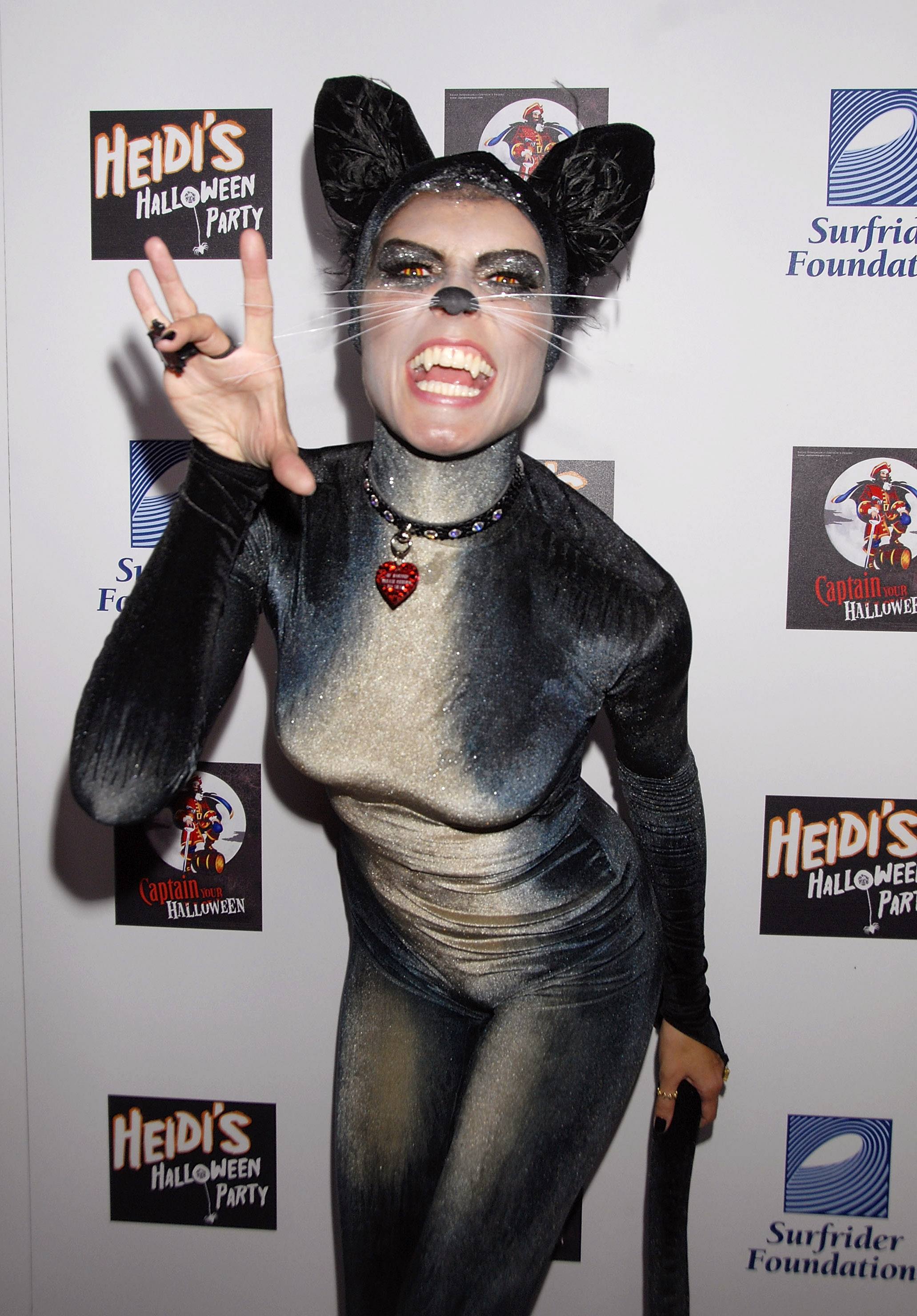 No one does a cat like Heidi. | Charley Gallay/Getty Images

At some point, everyone goes as a cat for Halloween — even Heidi Klum. In 2007, the supermodel slid into a skin-tight catsuit and accessorized with a collar. Like most of her costumes, the real winner was her makeup and prosthetics — her fangs look real!

As you can tell from her Jessica Rabbit costume, Klum knows a thing or two about transforming into a cartoon. In 2002 she wowed in one of her first ever cartoon costumes: Betty Boop. We love the elaborate makeup, wig, and curves. 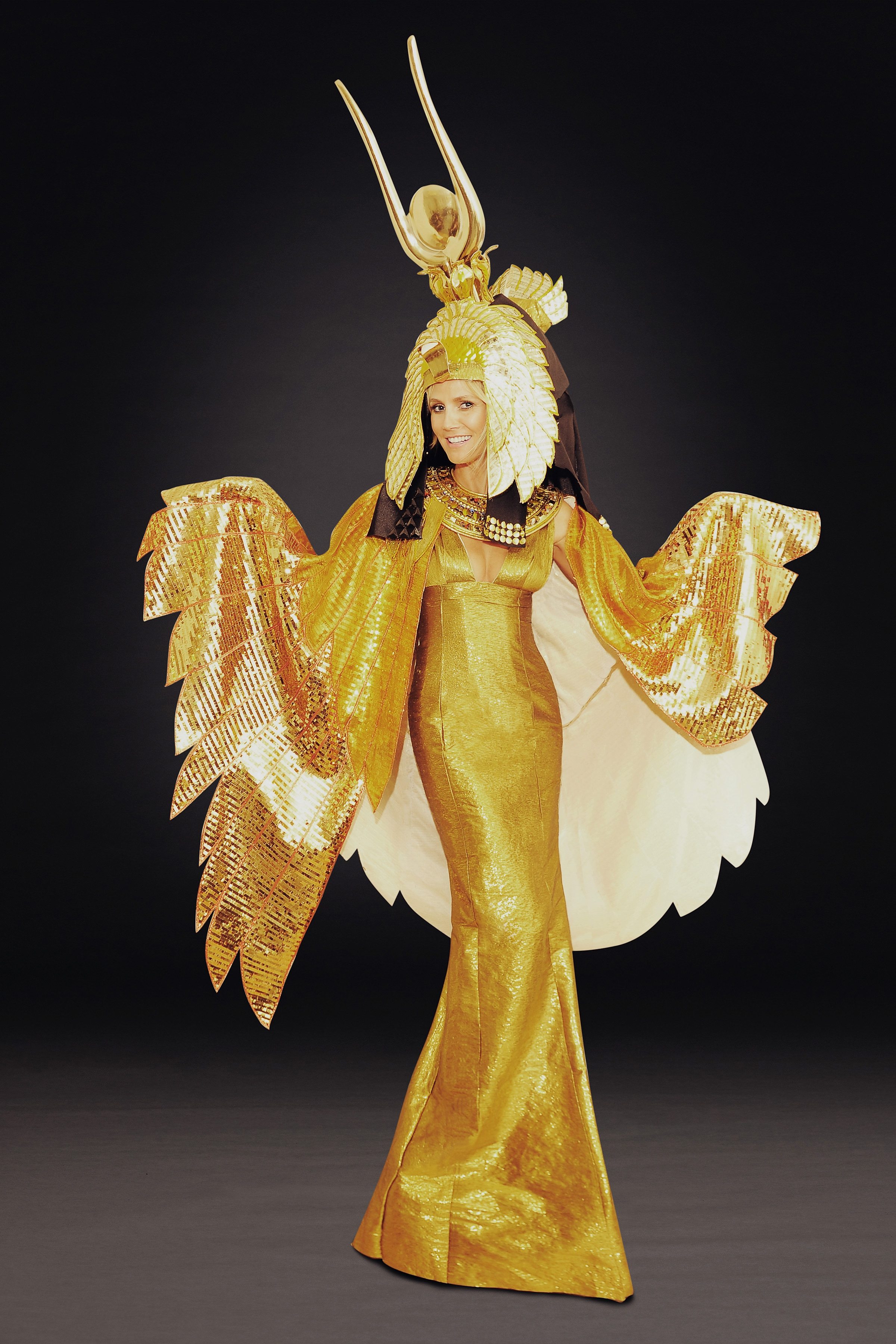 She wore the dazzling look in December. | Michael Loccisano/Getty Images for Heidi Klum

While she may have had to postpone her 2012 Halloween party — as a courtesy to those affected by Hurricane Sandy — Klum still wowed with a peek at her Cleopatra costume. But, don’t worry, she didn’t give it all away. The TV host and supermodel showed up in a completely different Cleopatra costume at the rescheduled party in December. 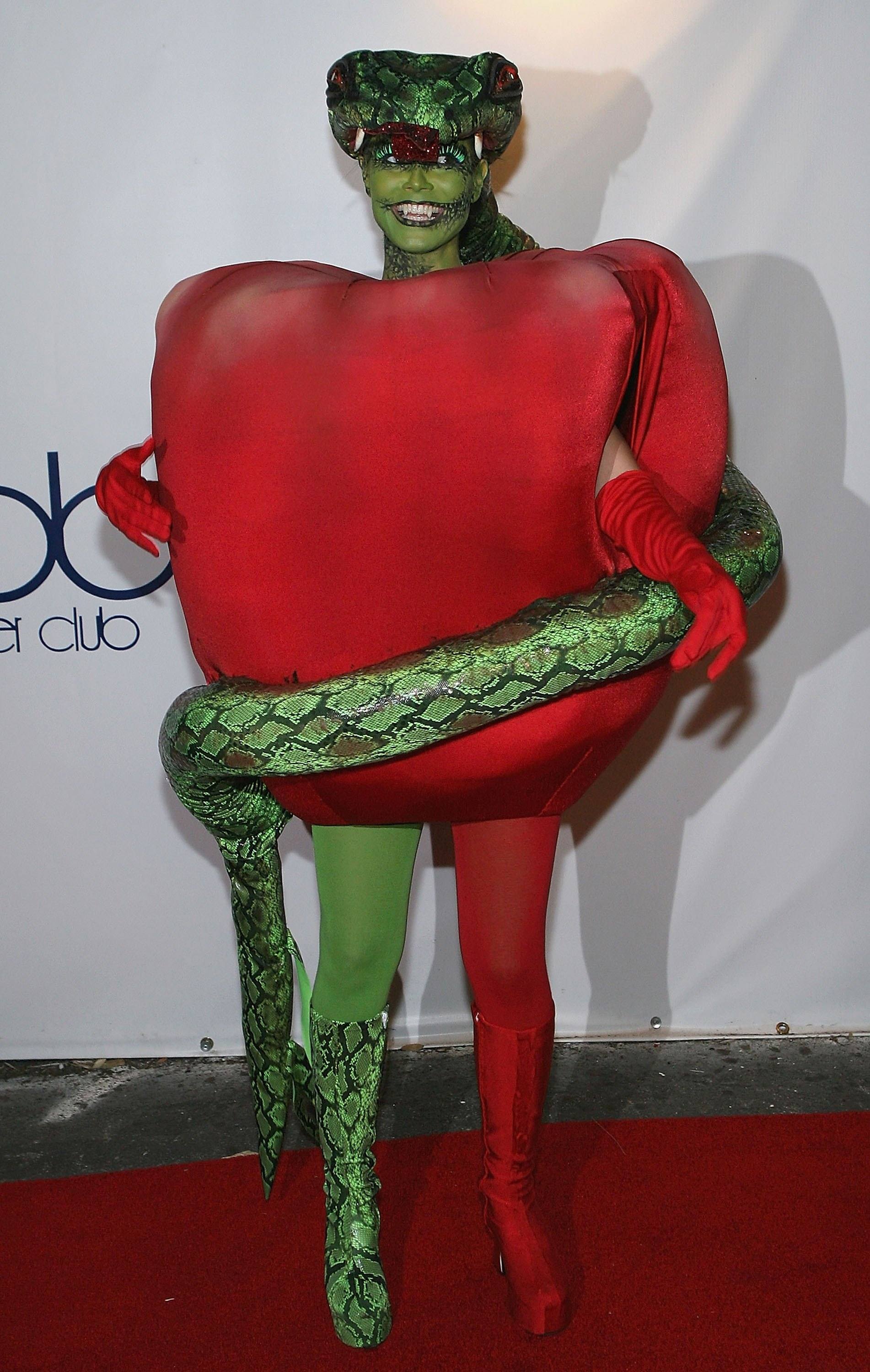 How did she sit? | Michael Buckner/Getty Images

Another memorable costume? The time she went as a piece of forbidden fruit. Dressed as a serpent wrapped apple, the supermodel wore two different boots — one red, one snakeskin, of course. Fangs and extravagant makeup completed the look. 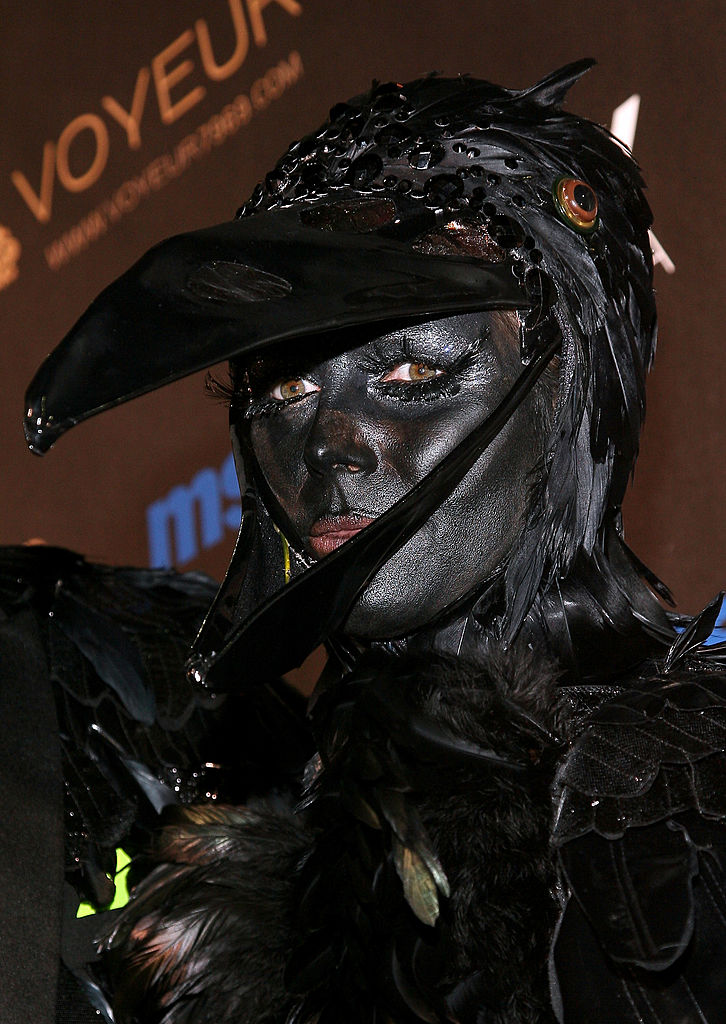 In 2011, Klum and her then-husband, Seal dressed as a pair of crows. While the costume didn’t appear as extravagant some of her others, it wasn’t very practical, either. She told Cosmopolitan, “It was bad. My husband was driving and could hardly see anything. When you have a beak on, you can’t talk to anyone, you can’t really drink. It’s not a good costume.” 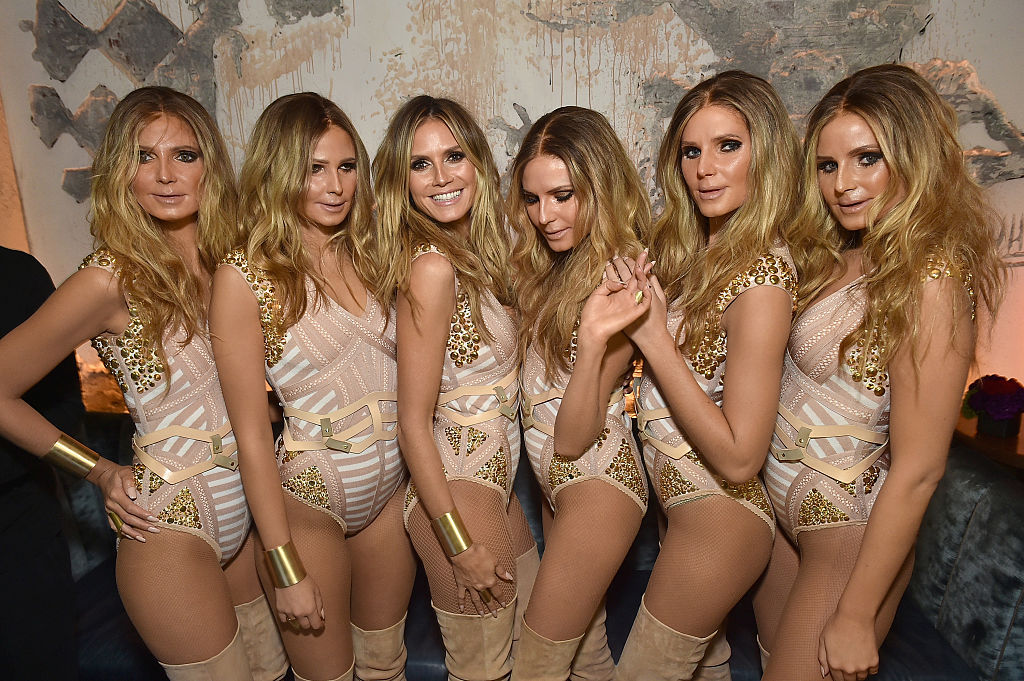 The other models were the ones who had to wait in the makeup chair. | Mike Coppola/Getty Images for Heidi Klum

For Halloween 2016, the supermodel decided to skip the hours of preparation and go as herself. Only, she had an army of clones trailing alongside her. She told Us Magazine, “I just got my own makeup done, put my own outfit on, fantastic! And that never happens. Usually I sit in hair and makeup for like 10 hours. It takes a long time.” While it wasn’t her craziest costume ever, everyone deserves a night off — even the queen of Halloween.