Apple’s New MacBook: What You Need to Know 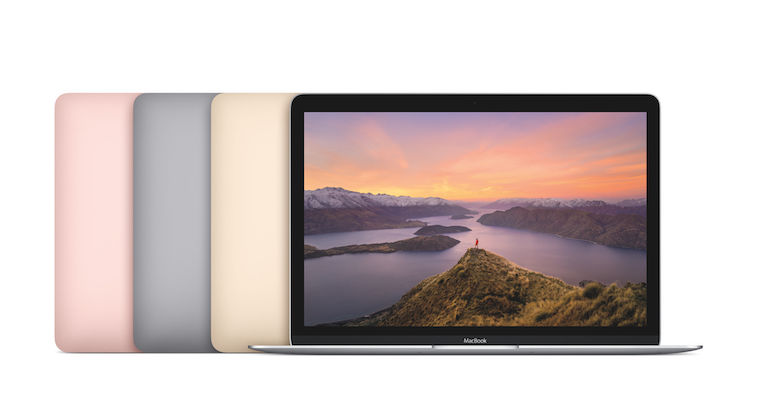 Rumors have been circulating that Apple would introduce a new 12-inch MacBook sometime early in 2016, and they proved true when Apple announced a new MacBook updated with a new Intel processor, improved graphics, faster flash storage, an additional hour of battery life, a 12-inch Retina display, a USB-C port, and a ForceTouch trackpad.

Like its predecessor, the new Retina MacBook is very light, without any vents, fans, or moving parts, and features the same all-metal unibody construction. The aluminum-bodied MacBook is offered in four finishes: gold, silver, space gray, and for the first time for a Mac, rose gold. And Apple increased the battery life of this year’s MacBook to enable 10 hours of web browsing, an improvement it attributes to the new processor architecture and a battery with improved chemistry. Curious? Read on to learn everything you need to know about Apple’s latest MacBook, both the good and the bad.

Some users, particularly those guilty of running multiple browser tabs and resource-intensive programs, had reservations about the speed of last year’s MacBook. Dieter Bohn reports for The Verge that the new MacBook model with an Intel Core m5 model clocked at 1.2 gigahertz “feels 25 percent faster and 100 percent more pink.” While the Skylake processor is only a modest upgrade over its predecessor, The Verge ran a few benchmark tests, and found that the speed of raw processor operations is increased about 20%, but disk-write speeds are as much as 80 to 90% faster. Bohn notes that overall, the new MacBook feels about 25% faster. Real-world usage will determine how the new MacBook measures up against last year’s model, but Bohn posits that a 25% improvement is enough to get many people “over the purchasing decision hump.”

Neil Hughes reports for Apple Insider that while Apple hasn’t made any statements about the raw processing power of the new MacBook, the company did say the the integrated Intel HD Graphics 515 offers up to 25% faster performance. But for those looking for a little more speed, Apple also offers a 1.3-gigahertz Intel dual-core m7 upgrade, which costs $150 extra for the 512-gigabyte model, and a $250 more than the entry-level 256-gigabyte version with 1.1-gigahertz m3 processor. All models are equipped with 8 gigabytes of RAM and Intel HD Graphics 515.

Bohn reports that one thing “that isn’t quite resolved” by the upgraded MacBook is the reality of the single USB-C port. The ecosystem of USB-C accessories and adapters is getting better and safer, but it will likely cost the average user an extra hundred dollars or so for the adapters they need to make the switch. Additionally, Apple’s implementation of USB-C doesn’t support the Thunderbolt 3 specification, which is the fastest implementation of the technology yet and is already available on some Windows laptops. But Bohn notes that he’s encountered more cables and drives that directly work with USB-C, without the need for an adapter, and seeking those out can help streamline your setup (and declutter your bag).

Jean Baptiste Su reports for Forbes that Apple’s choice to equip the new MacBook with just a single USB-C port is “the biggest letdown” in the new computer. Because the all-in-one port supports charging, USB 3.1, and video outputs, it seems just about inevitable that you’ll need to buy some kind of adapter or dongle to enable you to use more than one of those functions at a time.

Lisa Eadicicco reached the same conclusion in a report for Time, writing that the single port is limiting not only because there aren’t many compatible accessories yet, but because it’s no longer simple to plug in accessories like an external hard drive while simultaneously charging the laptop. Nonetheless, she acknowledge that that may not be a deal breaker for users who are increasingly storing all of their files in the cloud, and therefore don’t often need to plug in a flash drive or an external hard drive.

Eadicicco notes that the MacBook’s 2,304×1,440 resolution screen is sharp and colorful, but that doesn’t set it apart from its competitors, since most high-end laptops are now equipped with extremely high-resolution screens. However, the screen is a noticeable upgrade for users accustomed to a MacBook Air, and Eadicicco noted that the colors appear rich, and the viewing angles are wide enough to show photos or videos to a group of friends gathered around the screen.

Another major change for those used to the MacBook Air or MacBook Pro is the new MacBook’s keyboard. Apple redesigned the keyboard last year, with a butterfly mechanism that is 40% thinner than the scissor mechanism used in most traditional keyboards. The result is that the MacBook’s keys sit flush against the keyboard deck instead of protruding from it. Eadicicco found it comfortable despite her initial skepticism, and noted that she was able to type slightly faster on it than on the keyboard of a MacBook Air. The new MacBook is also equipped with Apple’s Force Touch trackpad, which enables shortcuts like previewing a page in Safari, or quickly looking up a word on a website.

The MacBook is best for users who prioritize portability, and don’t mind the limitations that go with it — including the list of MacBook grievances that Raymond Wong noted at Mashable, like the shallow keyboard, the single USB-C port that doesn’t even support Thunderbolt 3, a surprisingly low-resolution FaceTime camera, and only incremental upgrades in processing and performance. If you need power, you should still opt for a MacBook Pro, and if you want something that’s built for web browsing and other lightweight tasks, you may be better off with a MacBook Air. The new MacBook is powered by Intel’s new Core M processors, which aren’t as powerful as the company’s Core I processors (which are used in the MacBook Air and Pro).

Additionally, if you can afford to wait to upgrade to a new Mac, consider biding your time, since the rest of Apple’s Mac lineup is expected to get updates this year, too. As Vlad Savov reports for The Verge, would-be upgraders disappointed by the minor updates introduced with the new MacBook can look forward to Apple’s Worldwide Developers Conference in June, where the company is rumored to be unveiling a major redesign of the MacBook Pro. In the meantime, users looking for power are stuck in limbo, disappointed that while one of Apple’s laptops has finally integrated Intel’s Skylake processors, it’s only the low-power M variant so far.