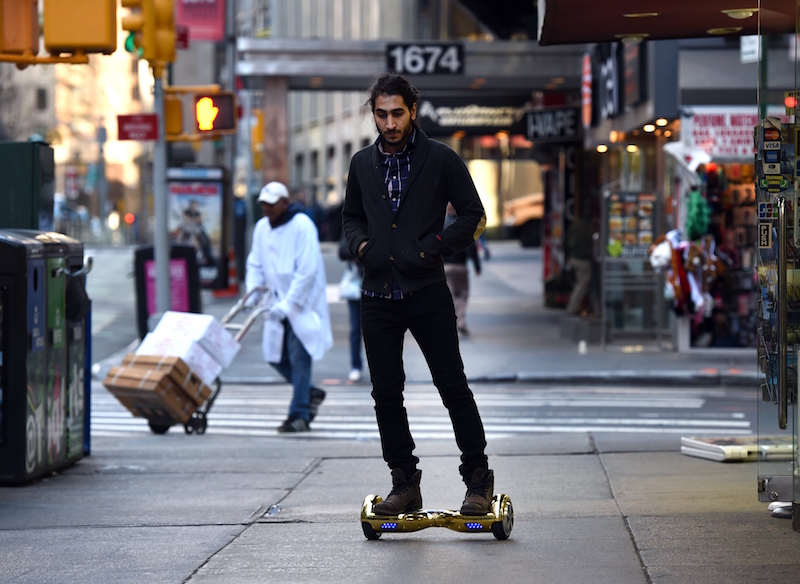 Hoverboards — or, more accurately, self-balancing, two-wheeled electric skateboards — are increasingly popular on sidewalks and holiday wish lists. They’re one of the most popular items of this year’s holiday season, but regulators, retailers, and parents are increasingly skeptical after a number of reports about fires and explosions.

As Katie Rogers reprots for The New York Times, retailers like Amazon and Overstock have removed some or all hoverboards from their shelves, pending safety reviews. The federal Consumer Product Safety Commission is rushing to investigate, and so far has logged 29 emergency room visits and 11 reports of fires in 10 states. Hoverboards have caught fire in homes, on sidewalks, and at malls. Though the self-balancing skateboards don’t actually hover, they move quickly enough to have been banned on city sidewalks and several airlines’ planes.

But consumers can still easily find hoverboards for sale online, both directly from manufacturers and from retailers. While Amazon has removed some popular models, there are still listings remaining on the site. And Chinese manufactures continue to sell budget models on eBay and elsewhere online.

Chris Perkins reports for Mashable that the devices that have caught fire are generally though to be the cheaper knockoff devices, though there’s been at least one notable exception. But while it’s easy to advise consumers to avoid knockoff devices, figuring out which hoverboards are safe and which aren’t is actually a more complicated endeavor than simply choosing one from a reputable brand. That’s because all of the hoverboards you can currently purchase use the same kind of battery, and are manufactured and imported in what Perkins characterizes as a “convoluted” process.

Hoverboards, like smartphones and laptops, use lithium-ion batteries, which the Times reports seem to be a “leading indicator” of the fires that have occurred so far. Lithium-ion batteries are generally safe, but Mashable notes that poorly-made ones can pose a risk of explosion. “A Lithium-ion cell uses a metal separator to keep positive and negative electrodes apart, preventing short-circuiting,” Perkins explains. “A short-circuit will cause a lithium-ion battery to heat up very quickly, often leading to fire.” Because poorly-designed batteries can overheat, they can then explode.

Rogers reports for the Times that because hoverboards are currently unregulated, “several companies are using different manufacturing techniques in order to make a generic model. This helps those companies avoid avoid any intellectual property inquiries as they are shipped overseas to American consumers.” She adds that preliminary investigation of some models indicates that the lithium-ion batteries are being overcharged, or are being stacked in ways that the technology was not intended to handle.

Mashable reports that some hoverboard manufacturers seem to be using low-quality batteries that are susceptible to short-circuiting due to poor separator design. That’s why the fires that result from improper implementation of lithium-ion batteries “almost never” happen with name-brand devices.

Larger companies seem to use higher-quality batteries and battery setups, while Chinese factories that make lithium-ion batteries don’t offer the quality or consistency of batteries produced by manufacturers like Samsung or LG. Many hoverboards are made in factories in China with these inferior batteries, and then are purchased by distributors to be labeled and shipped to consumers. A single distributor could source boards from a number of different factories, which makes tracing the source of a component like a battery particularly difficult.

There’s no way for consumers to tell which hoverboards are likely to overheat, explode, or catch fire when buying, especially considering the fact that there’s no guarantee that even high-quality batteries won’t catch fire. A failure usually won’t manifest until after the battery has been charged and discharged several times, a process that ultimately triggers the failure.

There’s no reliable way to figure out where the hoverboard you’re considering — whether you’re shopping on Amazon or at a mall kiosk — actually came from. And the way that a hoverboard is used, often on uneven surfaces or colliding into things, just increases the likelihood of battery damage that could lead to a fire, which, in turn, makes it harder to argue that a hoverboard from a reputable manufacturer will really be safer than one from an off-brand.

The lack of regulation — and the fact that regulators only get involved after injuries and accidents have been reported — should be frustrating to consumers, especially those who are dubious about buying their kids, or their friends’ kids, devices that have gone largely untested. There’s little advice on how to evaluate the safety of a hoverboard, or how to purchase one that will be safe to use. And if you’re still in the market for a hoverboard, you’d be wise to realize that there are a lot of companies ready to cash in on the most exciting item of the holiday season, even at the expense of taking time to adequately address the very real safety concerns at play.