Are Instagram’s Filters Going Out of Style? 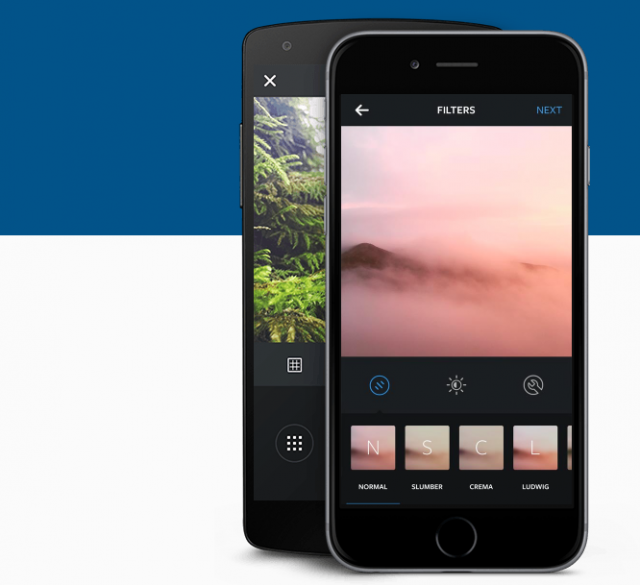 Instagram 7.3 brought both new Explore features and a new edit screen that speeds the process of sharing an image with your followers. Natt Garun reports for The Next Web that for some Android users, the latest version of the app condenses the Edit, Location Tag, User Tag and Caption tools into a single screen. Garun reports that the new quick edit screen reveals that even Instagram knows that its filters are passé as the app stores on both Android and iOS fill with an ever-growing assortment of photo editing apps.

The new version of Instagram’s Android app streamlines the editing options considerably. A “Swipe to Filter” overlay enables you to easily sample different filters instead of tapping through the 20-plus offerings. The new quick edit screen also shows a handful of nearby locations that you can scroll through, plus a simpler caption box. In the past, you’d need to first select a filter, then choose from various editing tools, tap the next arrow, then add your caption and location. If you wanted to tag other users, then you’d tap another button that would take you to yet another screen.

With an ever-growing assortment of other editing and retouching apps to download and cherry-pick the best features from, users increasingly view Instagram as the last stop for editing an image before sharing it on the platform. In response, Instagram is now focusing on enabling you to share a photo you’ve edited elsewhere — in the case of some users, often using a well-honed workflow comprised of actions in two or three different apps — in the shortest amount of time possible.

As Molly McHugh reported for Wired earlier this year, a growing body of studies is dedicated to examining how and why people choose the filters they choose on Instagram, and how their choices of filters influence others’ reactions to the image in question. In one such recent study, researchers at Yahoo Labs examined 7.6 million Flickr photos, many of which originated on Instagram and were then uploaded to Flickr, and found that “filtered photos are 21 percent more likely to be viewed and 45 percent more likely to be commented on.”

The Yahoo Labs study also found that people like higher contrast and corrected exposure, and find a warmer temperature more appealing than a cooler one. Users whom the researchers characterize as “serious hobbyists” use filters only to correct a problem, like problematic exposure. More casual photographs are more likely to manipulate their images with filters or adjustments that make them feel more “artificial.” The researchers also found that, as McHugh puts it, “filter snobbery is dying.” Everyone uses filters, even professional photographers, and photographers of all skill levels enjoy the process of choosing a filter. In fact, the process of seeing their photos transformed by the different filters Instagram (and other apps) have to offer is one reason why people like filters so much in the first place.

On the other hand, the abundance of editing apps that enable users to add filters, retouch flaws, and otherwise enhance subjects’ facial features and body shape is regarded by some as a symptom of bigger problems than innocent enhancements of a shot’s exposure or contrast would lead the casual observer to believe.

Olivia Fleming recently reported for Elle that “Instagram is ruining our self esteem” by making images with carefully considered angles, corrected pores, and air-brushed blemishes the new normal. By enabling us to make edits and add filters, the argument goes, Instagram and the host of other photo-editing apps feed our insecurities and encourage us to find a version of ourselves that gets the most likes and comments, rather than share an authentic and relatable version of our faces and our lives.

Morgan Jerkins, writing for Racked, points to a more pointed problem inherent in Instagram and other photo editing apps: what she refers to as the “quiet racism” of Instagram’s filters. For people of color, most of Instagram’s more than 20 filters, meant to enhance or beautify a photo and its subject, “inevitably alter our appearances beyond recognition.” Jerkins notes that while people usually think of technology as unbiased, photography has a history of racism and of exposing the biases both of the person who is capturing an image and of the parties involved in the development and production of photographic tools and materials.

In the 1950s, for instance, Kodak calibrated skin tones using a reference card featuring a white model dressed in high-contrast clothing. The model became the standard for image processing in the United States, even if a photograph contained only black subjects. Kodak’s film, consequently, was terrible at capturing the varying hues and saturations of black skin, which absorbs 42% more light than white skin. Jerkins reports that Instagram, which prides itself on filters meant to imitate films from makers like Kodak and Polaroid, offers filters that result in “an image that leans more towards whiteness,” brightening skin tones to a degree that has both racial and cultural implications.

As Jerkins suggests, the solution should be to make filters more accommodating for people of color. “After all,” she notes, “what good is it to fine-tune a photo so much that the result is only a shadow of the person who exists in the image?” Filters, on Instagram and in other apps, don’t seem to be going away. But as Instagram seems to be passing the baton to the developers of other photo-editing apps, we can only hope that the developers and users of those apps will become more conscientious about the effects of their filters, editing options, and retouching tools.