If you keep your finger on the pulse of entertainment, you know last night’s Golden Globes officially kicked off the 2017 awards season. Whether you’re a complete cinemophile or watch all the “it” TV shows, the Golden Globes is great because it combines movies, television, and yes, fashion. Any awards show — including this year’s Golden Globes — has tons of good, bad, and seriously questionable red carpet looks. If you missed last night’s ceremony, don’t fret: We’ve rounded up the five best women’s looks of the night. 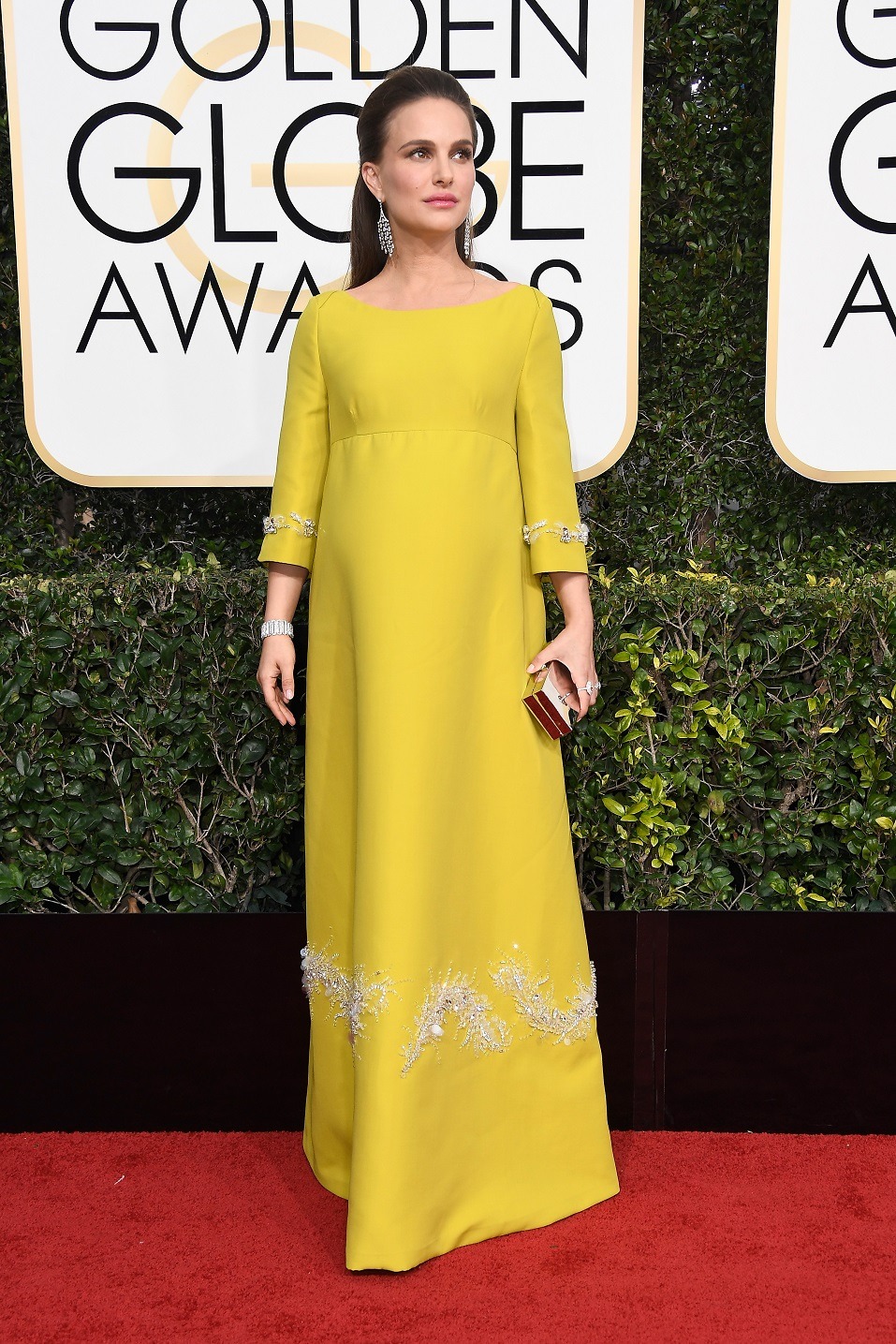 Natalie Portman is predicted to win several awards for her honest portrayal of former First Lady Jacqueline Kennedy Onassis, so expect to see tons of show-stopping red carpet moments from the actress. We can’t imagine it’s easy for an expecting mother to dress to the nines for a high-profile event, but Portman’s chartreuse Prada frock passed the test with flying colors. The fit hugged Portman’s petite shape just right, while the subtle appliqué offered a thoughtful twist. Paired with intricate earrings, big hair, and a pretty pink pout, Portman, once again, perfectly paid homage to Jackie O. 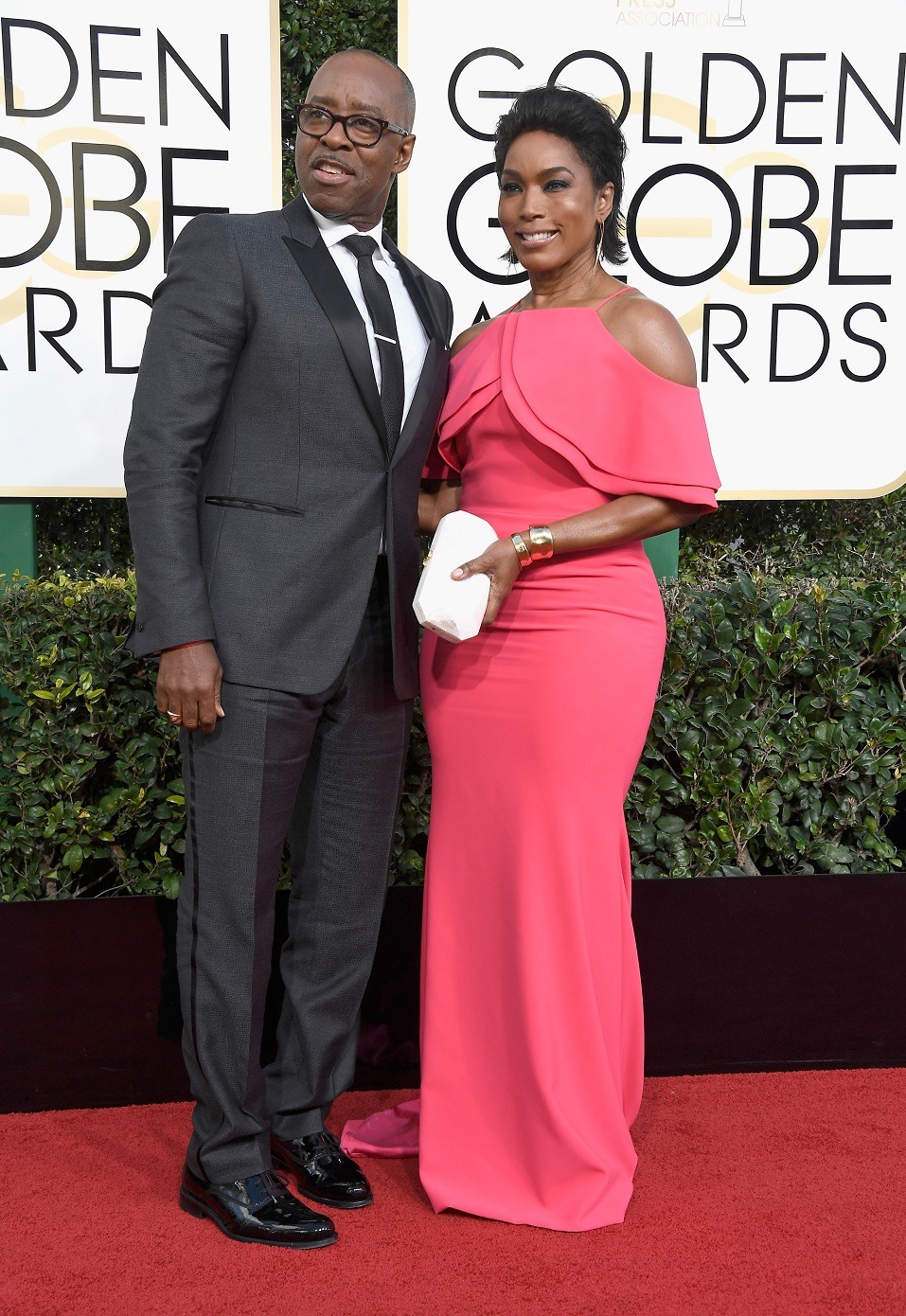 Let Angela Bassett’s look remind you that plus ones can steal the show, too. Dressed in Christian Siriano, Bassett’s pink dress was unexpected but, compared to the sea of predictable column dresses we spotted on the red carpet, incredibly refreshing. She glowed in the flirty pink hue, plus the dress itself fit her like a glove. We haven’t seen anything like her partially ruffled, partially halted bodice on the red carpet recently, but the off-the-shoulder look incredibly on trend and she wore the dress with complete confidence, which is always in style. 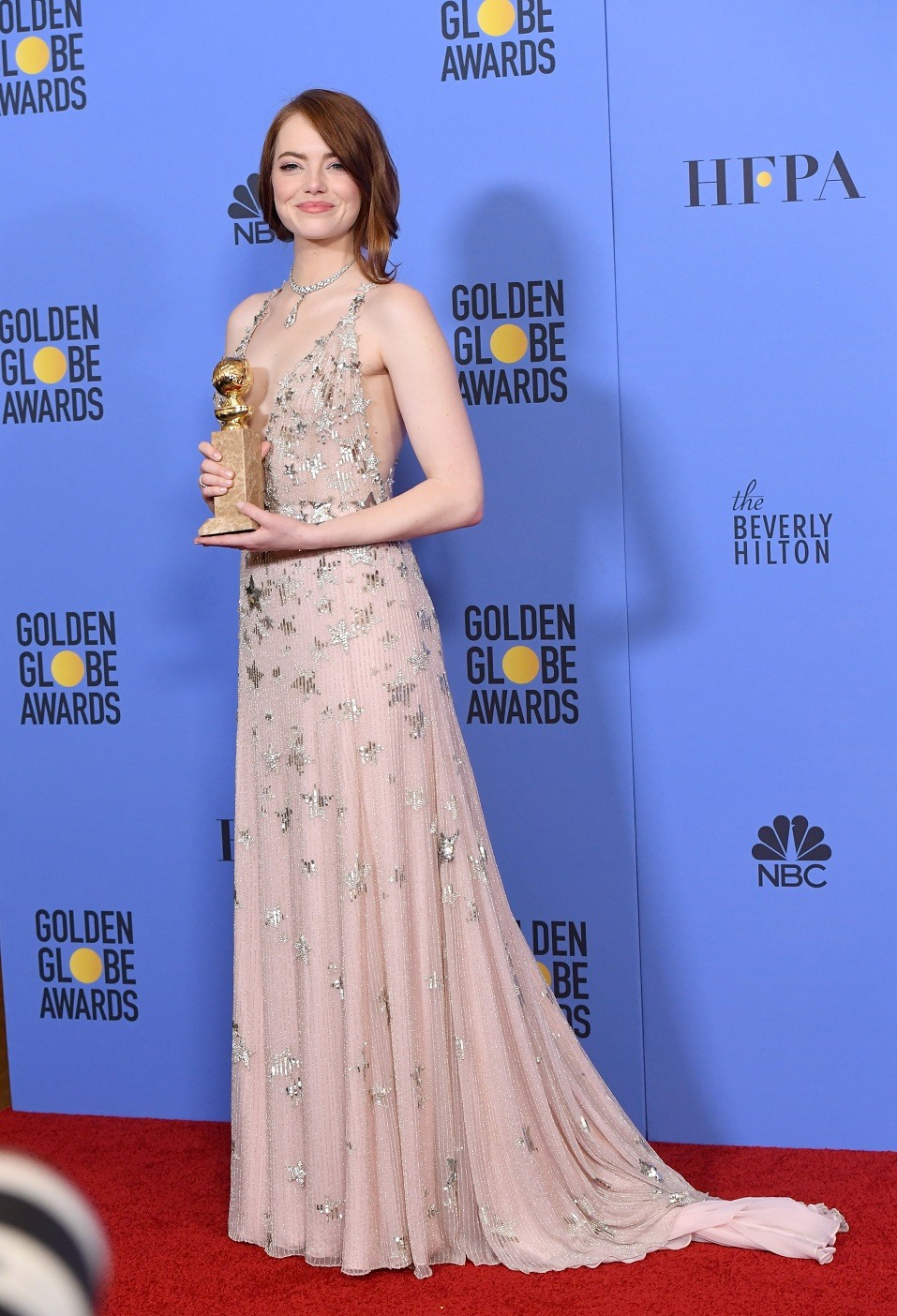 Whether it’s a star-studded awards show or a movie premiere, Emma Stone always brings some fresh sartorial energy. Luckily, last night’s show was no exception. Stone’s feminine Valentino gown epitomized cool leading lady. The star-adorned frock was equal parts whimsical and chic, and complemented the modern-musical-turned-runaway-hit La La Land beautifully. While most deep V-necks are paired with longer pendants, her shorter necklace provided that rule-breaking air we usually see in her looks. For a classic finish, the Best Actress in a Motion Picture – Musical or Comedy winner rocked a loose updo and natural makeup. 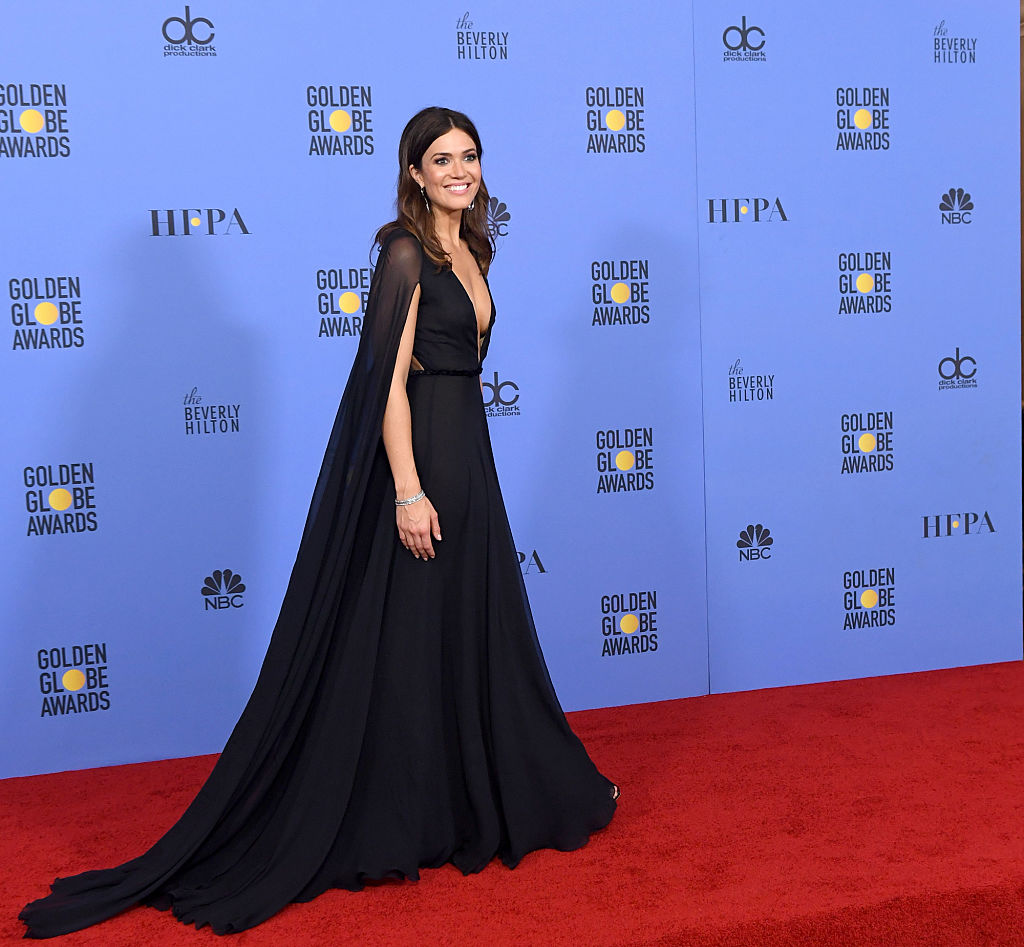 In her smash hit show This Is Us, Mandy Moore plays a mother struggling to raise three kids. But this look, courtesy of Naeem Khan, is far from matronly. Plunging necklines can be risky depending on the dress and accessories. This instance, however, was tastefully matched with a sheer cape. “I feel like a quasi-superhero,” Moore told Entertainment Tonight’s Kevin Frazier.  If you ask us, she looks like a full-on fashion superhero. Paired with gigantic earrings and sleek waves, Moore hit that sweet spot between stylish and sultry. 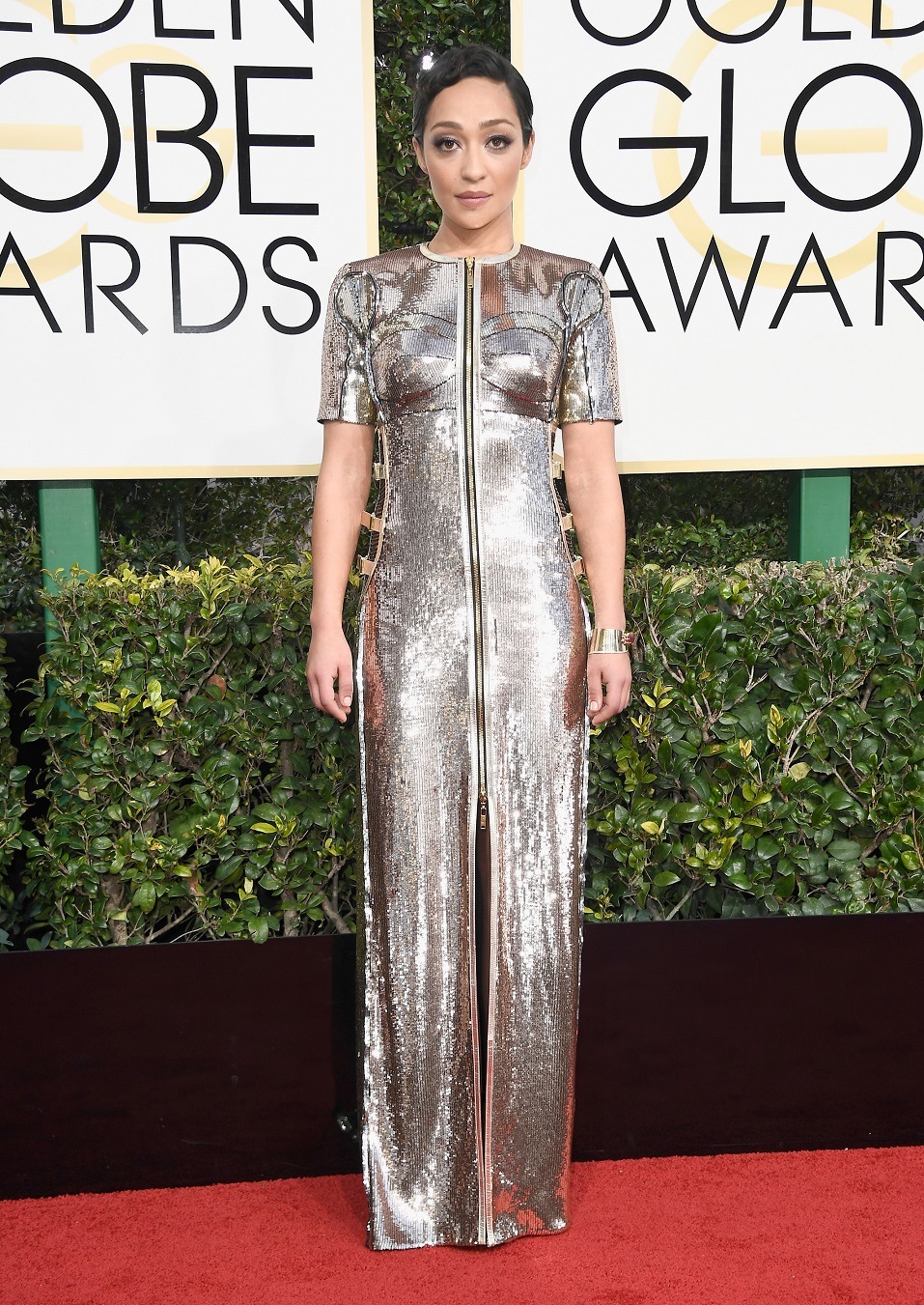 Relatively new to the awards show circuit, Ruth Negga is one to watch this season. Not only is her performance in Loving critically acclaimed, the actress also has some serious style chops. Take this shimmery number by Louis Vuitton, for example. It was sexy without being too sexy and fashion-forward without being too avant garde. The dress fit Negga like a glove and while the zipper down the middle provided a sexy wink, the small slit was thought-provoking, but rather modest. Though head-to-toe sequins can be hard to pull off or even look outdated, the short-sleeves and subtle piping along the bodice made the whole look appear more modern.