The 10 Best Routers to Improve Your Wi-Fi at Home

Trying to improve your home Wi-Fi network? One of the best ways is to choose a new router. The routers ahead all earned high marks from the reviewers at Consumer Reports. | Source: iStock

It’s a common problem: Your Wi-Fi network is too slow, too undependable, or giving you problems of another kind. There are lots of solutions you may want to consider to improve your Wi-Fi. Replacing an aging or outdated router is a solid strategy.

You may not have thought too much about the router, especially if your cable company provided you with one. But if you and your household use lots of devices or live in a large home, the routers you lease from your internet provider likely don’t cut it. In fact, your router may be responsible for some of the performance issues plaguing your network.

As Consumer Reports reviewers explain, there are plenty of reasons to take a look at new routers (besides the obvious reasons of a worn-out or broken router). If you have a broadband modem that’s directly connected to a single computer, but want to go online with multiple devices, then you’ll need a router.

If your current router only supports wired connectivity, but you want to go online with wireless devices like a laptop or tablet, then you should start shopping for routers. Or, if your existing router is too slow or its range too short to reach the parts of your home where you want to use your devices, then you probably need a new router.

When comparing routers, you want the best mix of speed, range, and reliability. The top speed of almost any new router will exceed the speed of your broadband connection. If you live in a large home, or one with many obstructions between the central area and the locations where you use your devices, you need a model with a long range and strong throughput at a distance.

If you live in a small apartment, range won’t be quite as important, but advanced security settings are crucial in crowded urban areas and buildings with many residents. If you host guests often, consider routers that make it easy to set up a guest network. And if you have children, you may want to choose a router with parental controls. The 10 routers ahead earned top marks from Consumer Reports reviewers.

The Linksys AC1900 is a great choice if you live in a smaller home or apartment. | Source: Amazon.com

The Linksys AC1900 is an 802.11ac router with four gigabit ethernet ports and two USB ports. While this may not number among the top routers if you live in a large house with many rooms or more than one floor, it works great in a smaller home or apartment.

The router achieves its best performance with 802.11ac-compatible devices, but it can still connect to devices running in 802.11n mode. This model performs well for transferring files between devices or working with a fast broadband connection, and its four ethernet ports and two USB ports make it a versatile choice.

The Netgear N750 is an 802.11n router with simultaneous 2.4 and 5GHz frequency bands, four gigabit ethernet ports, and one USB port. Even though this model is about half the price of many other 802.11ac routers that Consumer Reports tested, its throughput is almost as good in all circumstances.

This is a great device for larger houses, and even though it’s not the fastest device on the market, it can handle several devices using Wi-Fi at once. However, it isn’t 802.11ac-compatible, so you won’t get the very latest technology.

If you’re generally satisfied with the internet speed that you get now and don’t think you’ll need anything significantly faster in the future, then Consumer Reports researchers think this model “is a great buy. Just beware that you’re not future-proofing your home and may need a new, faster router in a few years.” 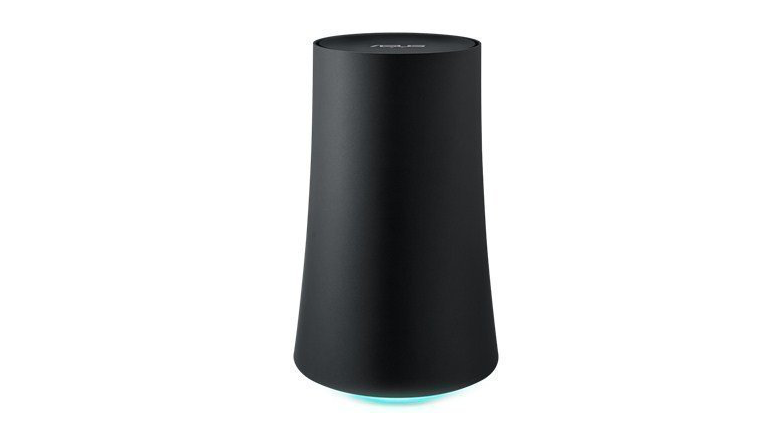 The Google Asus OnHub is easy to set up and always up-to-date. | Source: Amazon.com

The Google Asus OnHub is an 802.11ac wireless router with one gigabit ethernet port and one USB port. This is the newest OnHub model, and its major selling points are that it’s easy to set up, it’s always up to date, and it features a design that you won’t need to hide under a shelf.

A smartphone app walks you through a quick setup process. However, OnHub isn’t the best choice for users who want a lot of control. This model sets up a single SSID, and there’s no way to separate them to denote a 2.4 and 5GHz network. Consumer Reports notes that this is good for roaming, but only if your devices can switch among frequency bands seamlessly.

Parental controls and Quality of Service priority settings are missing, though the Asus OnHub does have a proximity sensor to boost Wi-Fi speed for specific devices, which you have to enable by waving your hand over the top of the device each time. However, this router is good for large houses, and is “one of the best” at farthest distances.

The Apple AirPort Extreme is great at near and mid-range. | Source: Amazon.com

The Apple AirPort Extreme is an 802.11ac router with three gigabit ethernet ports and one USB port. Reviewers found that this router performs well at near and mid-range, though it falters a bit at farther distances.

Unlike most other routers, Apple doesn’t use a web-based program to set up and manage the router. But for Mac users, setup is easy, since the AirPort control software is already built in to the computer. Windows users, on the other hand have to search for the software online, and then download and install it.

The AirPort Extreme doesn’t have Quality of Service (QoS) priority controls, though this model does support Time Machine backup over the network to a USB drive plugged in to its USB port.

The D-Link AC1900 is an 802.11ac router with four gigabit ethernet ports and two USB ports. This model is a great choice for users who already have 802.11ac-compatible devices (or want a router that will be ready when they do purchase new devices).

Consumer Reports reviewers note that this model falters at far distances, “so it’s not the best if you live in a larger house with many rooms or more than one floor.” However, it performs well in smaller homes or apartments, where the signal doesn’t need to travel as far.

This model is a great performer if you need fast speeds for transferring files between devices; if you’re paying for speeds of 50Mbps or more; or if you just want to avoid thinking about routers for the next few years.

The D-Link AC1200 is a versatile device with the latest technology on board. | Source: Amazon.com

The D-Link AC1200 is an 802.11ac router with four gigabit ethernet ports and one USB port. Consumer Reports reviewers think that this model should make your shortlist of routers if you already have 802.11ac-compatible computers and devices, or if you want your router to be ready when you upgrade your gadgets.

This model isn’t the best choice if you live in a large house with many rooms or with more than one floor, but it works well in smaller homes and apartments. It achieves its best performance if all of your devices are 802.11ac-compatible, but still offers great performance for devices running in 802.11n mode. The device supports guest networks for both the 2.4 and 5GHz bands.

The eero home wi-fi system is an 802.11ac wireless router with one gigabit ethernet port and one USB port. Eero works well as a single router, but its three-pack version enables you to set up a mesh network to cover a large home where walls and multiple floors would typically block signals.

Because eero forms a mesh network, the speed doesn’t degrade in the same way that it would with a Wi-Fi extender. Consumer Reports reviewers explain, “We did some extra testing with 3 eeros and found the throughput dropped about 10-15% with each additional router as compared to about a 50% drop when adding each typical range extender.”

The system is great for larger houses, and is remarkably easy to set up. However, some users may want more control than what eero offers, since there’s no way to denote separate 2.4 and 5GHz networks, no parental controls, and no QoS priority settings.

The Netgear AC1900 is an 802.11ac router with four gigabit ethernet port and two USB ports. Reviewers found that it offers very good performance even in larger houses, particularly those with more than one story.

It can handle several devices using Wi-Fi simultaneously, such as a gaming console, a TV streaming movies even in 4K, and a wireless speaker streaming music. Additionally, this model supports Apple Time Machine backup over the network to a USB drive on its USB port.

Two USB ports offer high versatility, and enable you to connect computers, printers, or storage devices. Consumer Reports notes that the security features of this router are good, and you can use Quality of Service (QoS) priority ranking to get better performance when you have multiple connections.

The Asus AC1200 is an 802.11ac wireless router with four gigabit ethernet ports and one USB port. It offers fast performance even in larger houses, and is especially good for residences with just one story.

Consumer Reports reviewers found that this model offers very good performance, but nonetheless “isn’t the best at farthest distances.” However, reviewers concluded that the device “should still provide a fast enough connection for typical web browser and even streaming lower resolution video.”

This model can quickly transfer large amounts of data between devices and is extremely easy to set up. Additionally, Asus offers an app for setting up and managing the router, and this model also carriers a 24-month warranty, which is longer than most others.

Consumer Reports found that the Linksys AC2600 is one of the best performers. | Source: Amazon.com

The Linksys AC2600 is an 802.11ac wireless router with four gigabit ethernet ports and one USB port. Consumer Reports reviewers found that this model was one of the best performers, and works particularly well for larger houses, where it offers great throughput from room to room and even floor to floor.

This model gets its best performance with 802.11ac-compatible devices, but also offers excellent performance in 802.11n mode. The router is a great choice if you need to transfer large files between devices; if you pay for speeds of 50Mbps or more; or if you just want to future-proof your purchase and not think about routers for a few years. Setup is easy, and this model supports guest networks for both 2.4 and 5GHz bands.