6 Best Samsung Tablets You Should Consider

It’s easy to go wrong when you’re shopping for a tablet. There are plenty of mistakes that people make when doing their research and comparing their options. And while there are some great deals out there, there are also plenty of tablets that just aren’t worth their purchase price. But a Samsung tablet can be a great purchase, particularly if you know what you’re looking for.

Samsung is one of the most well-known names in consumer electronics, and offers a dizzying array of tablets to choose among. But not every Samsung tablet has the specs or the features to make it to your shortlist of top contenders. Ahead, check out our picks of the six best tablets from the South Korean tech giant, and you might just find the perfect Samsung tablet for your preferences and priorities. 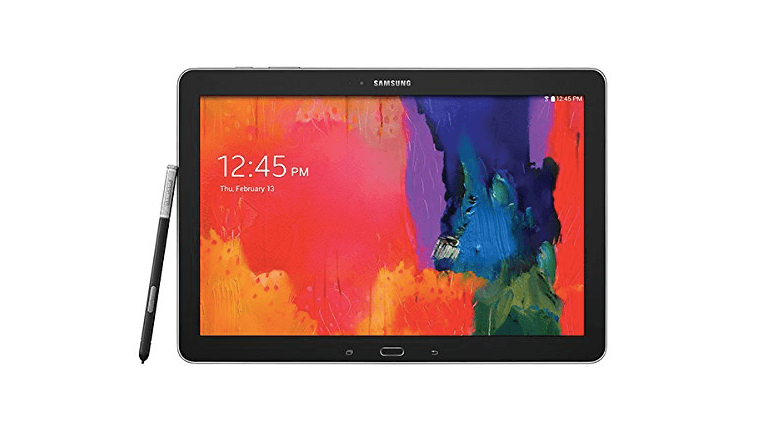 Kris Carlon reports for AndroidPit that the Samsung Galaxy Note Pro is a heavy-duty tablet that’s great for multitasking. Carlon points out that in the world of Android tablets, there are plenty of devices that are great for casual usage, like reading on the weekends, watching movies in bed, or playing a game on the subway. But your options are fewer when it comes to tablets that are designed for “seriously mobile people with serious work to do.” But this Samsung tablet is one you should consider if you need multitasking ability and productivity features on the go.

The Samsung Galaxy Note Pro features Samsung’s S Pen stylus, and has a massive 12.2-inch display, which is bright but, to be fair, not quite as saturated as most of Samsung’s AMOLED displays. Carlon reports that despite its large form factor, this Samsung tablet “feels remarkably solid — not at all flexy like the Nexus 9 or creaky like many other larger tablets made out of plastic.” The textured plastic back is comfortable and grippy, and the stylus makes the device a great choice for designers and editors. This Samsung tablet supports LTE, and since it’s been on the market for a while it’s probably not the top choice for “graphics-intensive applications or particularly demanding tasks, but for general usage it is more than capable.”

The Galaxy Tab A — offered in both 8-inch and 9.7-inch screen sizes — is a Samsung tablet that CNET reports is “affordably priced and offers many premium app perks for free.” While the plastic construction is far from high-end, and this isn’t the tablet for you if you want high-performing audio, the Galaxy Tab A is a simple tablet that offers good value for customers who need an entry-level tablet. Despite the plastic construction, this Samsung tablet still feels comfortable and lightweight. CNET characterizes the device as a “solid budget tablet that excels in giving you the most bang for your buck.”

The Galaxy Tab A comes with Microsoft Office apps, including Word, Excel, and PowerPoint, which makes it great for school or work. There’s also a multi-function window that can handle two apps at once, and with a 1.2GHz quad-core Qualcomm Snapdragon CPU, 1.5GB of RAM, and 16GB of internal storage, the device doesn’t run fast, but does run “without a hitch.” Consumer Reports points out that this Samsung tablet has the “squarish screen aspect that iPads are noted for, which is better for photos but less so for videos.” Combined with a very good camera and display quality, this is a great tablet for taking and viewing photos and videos, though it’s worth pointing out that the screen’s resolution isn’t as high as that of some more-expensive tablets.

AndroidPit rates the Samsung Galaxy Tab S as the best tablet for reading. This Samsung tablet is offered in two different sizes, but the publication reports that the smaller, 8.4-inch version offers “the perfect reading experience” thanks to its Super AMOLED screen, which DisplayMate named the best display on the market. The build incorporates both slick plastic and copper edges for a uniquely elegant look, and this Samsung tablet is very lightweight, which is a plus if you’re going to be holding it up to read for long periods of time.

Samsung placed the charging port on the right side of the device instead of along the lower edge, which makes it easy to use even when the tablet is plugged in. The resolution and color intensity of the display are impressive, and a feature called SideSync enables this Samsung tablet to connect with Samsung smartphones and even make outgoing calls from the tablet. A PC Remote app enables users to control their computers from the tablet, and the device can be unlocked using your fingerprint. 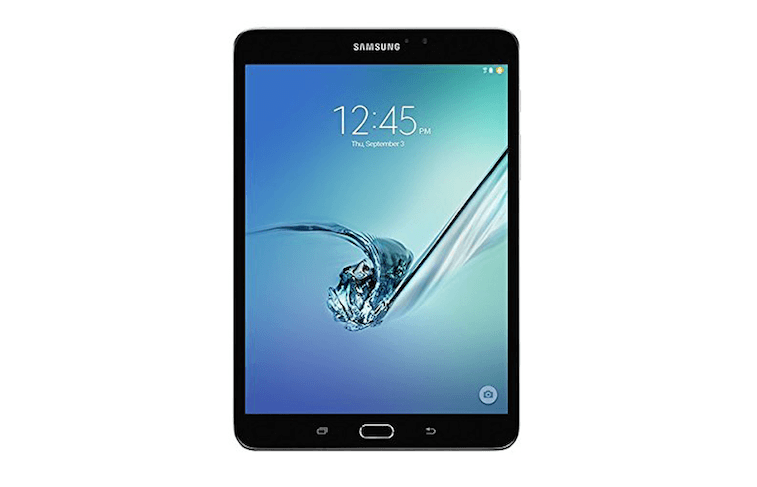 Matt Swider reports for TechRadar that the Samsung Galaxy Tab S2 is a lot like an iPad, with the exception of its price. The two screen sizes in which this Samsung tablet is offered match the iPad Air 2 and iPad mini 4 in a 4:3 aspect ratio, and while their launch prices were identical to Apple’s iPads, their price tags have since been slashed. (Additionally, Samsung’s tablets start at 32GB of storage, compared to the 16GB of their Apple rivals.) This Samsung tablet is light enough to hold comfortably in one hand, thanks in part to its plastic shell.

The device features a microSD card slot plus stereo speakers and a micro USB port. It also has a fingerprint-sensing home button and a vivid Super AMOLED screen. And as far as performance goes, this Samsung tablet earned a Geekbench 3 score averaging 4,077 — right between Google’s Nexus 9 tablet at 3,492 and Apple’s iPad Air 2 at 4,506. Android Authority reports that the Galaxy Tab S2 8.0 is among the best that Android has to offer, and PC Mag reports that the Galaxy Tab S2 9.7 is “one of the nicest Android tablets we’ve seen.” Consumer Reports recommends this Samsung tablet and reports that the 8-inch version offers long battery life, a lightweight build,  and a crisp display.

Kevin Lee reports for TechRadar that the Samsung Galaxy TabPro S aims to “take down the iPad Pro with the full-fat power of Windows 10.” This 12-inch tablet is extremely thin and features a vibrant Super AMOLED display that Lee reports “beats the pants off of almost every Windows device before it.” But this Samsung tablet does only have an Intel Core M series processor and limited memory, which means that “it lags behind some of the best Windows tablets on the market.” It also features a keyboard that’s too flimsy to keep the tablet standing. Nonetheless, this is a very compact Windows tablet that can handle the stress of a full work day and can even run heavy-duty apps like CAD and Adobe Premier.

CNET’s Dan Ackerman reports that this Samsung tablet “sets out to emulate the best parts of the Surface line, while also correcting some of its flaws.” The result is a Samsung tablet that offers an excellent value, though the system can stutter at times. But Ackerman thinks that while the TabPro S doesn’t do everything right, “its few missteps are in serve of a greater good — providing a top-notch Windows tablet experience at a reasonable price.” He adds that “the overall value here is excellent, especially considering the advanced display and very long battery life.”

If you don’t just want a big Samsung tablet, but are craving a giant one, then the Samsung Galaxy View may be the perfect device for you. Xiomara Blanco reports for CNET that the Samsung Galaxy View “is a new type of tablet hybrid — part TV, part tablet.” This 18.4-inch Samsung tablet is bigger than a laptop but smaller than a television, and is perfect for “anyone who watches a lot of video and either lives in a small place, or would like a supplementary screen for using around the house.”

It’s not exactly a miniature smart TV, since it lacks Ethernet or HDMI ports. But it has full Android capabilities and can access the Google Play Store. Though it’s huge as far as tablets go, it features a built-in kickstand, a microSD card slot, and a SIM card slot. While you pay for the privilege of portability with the Galaxy View, Blanco reports that this Samsung tablet provides a “satisfying” gaming experience for some games (though not for first-person shooters and other games that require both of your thumbs to be on the screen). With a hefty price tag, this isn’t the Samsung tablet for everyone. But if you’re short on space and the device fits your specific needs, it’s a unique tablet.