Keep falling for fake news stories? These apps and browser extensions may be able to help | Josep Lago/AFP/Getty Images

Houston, we have a problem. That problem is fake news. Or, more accurately, the internet’s startling inability (or unwillingness) to distinguish between fake news and the genuine article, so to speak. People used to be able to tell the difference between a satirical headline from The Onion or The Borowitz Report and a legitimate news story on something that actually happened. They could tell when something sounded a little off. And they’d read an article before sharing it with abandon, and appending their own views on the topic at hand. But those days are over now.

So the internet is littered with fake news sites that churn out unsubstantiated or completely fabricated stories. They traffic in views and likes and shares primarily on Facebook. (This is the social network that Rob Harvilla of The Ringer reports is now “rife with misleading bullshit and outright lies and paralyzing vitriol.” The same social network that makes it easy to willfully lodge your head inside an echo chamber personalized to your worldview and customized to your confirmation bias.) But not everybody is happy to see their Facebook feed overtaken by absurd stories, willful misunderstandings, unfortunate misreadings, and blatant conspiracy theories masquerading as news.

In fact, many of us agree that fake news is a problem. Most of us have, at least on occasion, clicked on a story and quickly realized that it wasn’t what we expected. The ideal solution would be for us all to return to news literacy 101, to polish up our reading comprehension, and to get our bullshit meters checked. (We should also take stock of our biases, since it seems you can believe anything if it jibes with what you already think is true.) But if you need a short-term (and inherently imperfect) solution, there are a few apps and browser extensions that can help you stop falling for fake news stories — or at least offer a timely reminder that you can’t believe everything you read online. 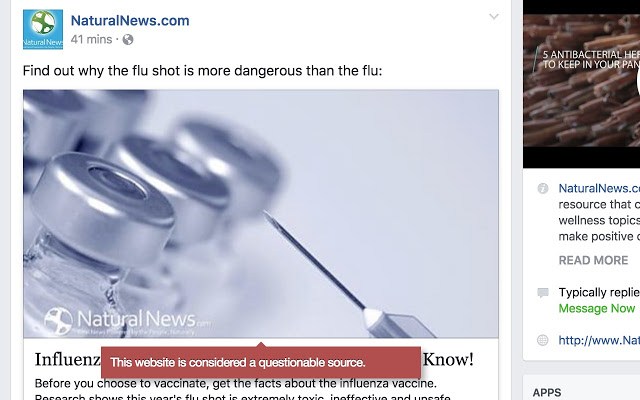 Get the B.S. Detector for Chrome to help you spot fake news | Chrome.google.com

B.S. Detector is a Chrome extension that “warns users about unreliable news sources.” The software makes it easy for you to identify fake or even satirical news sites, plus sources of questionable reliability. Creator Daniel Sieradski writes on Product Hunt that the extension’s warnings are powered by “a list of domains that are well-known sources of fake news, conspiracy theory, innuendo, and unsourced claims.” These sources, which cover the political left and right, “traffic in unsourced claims, fabulism, innuendo, and conspiracy theory,” and Sieradski notes that the list “does *not* contain sources that are merely the alternative to my own opinion.”

Fake News Alert is a Chrome extension that shows an alert when you “visit a site known for spreading fake news.” As Emma Hinchliffe reports for Mashable, the extension was created by New York Magazine journalist Brian Feldman. It relies on a list of fake and misleading news sources compiled by a media studies professor from Merrimack College in Massachusetts. Hinchliffe writes, “The list includes hoax sites like Breitbart and InfoWars as well as satirical sites like ClickHole that could confuse some readers.” 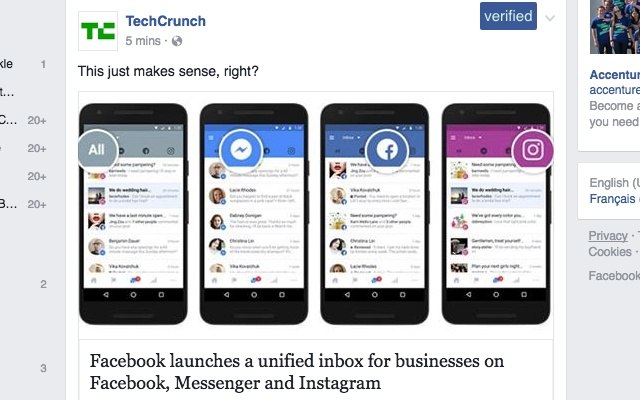 FiB helps you sort the fake news out of your social media | Chrome.google.com

FiB is a Chrome extension that “analyzes your Facebook feed for a url, picture, and text’s validity.” Created by a group of students, FiB uses an algorithm to verify the authenticity of the posts in your Facebook News Feed. The extension uses image recognition, keyword extraction, source verification, and a Twitter search. Anant Goel, one of the students who helped develop the extension, notes that the posts are then “visually tagged on the top right corner in accordance with their trust score. If a post is found to be false, the AI tries to find the truth and shows it to you.” The extension can even fact-check the posts that you write on Facebook.

Download the PolitiFact app to check the statements of politicians | Politifact.com

Pulitzer Prize-winning website PolitiFact is available in app form for both Android and iOS. Instead of flagging questionable sources, the app enables you to check the statements made by politicians, political pundits, or other people on the internet. The app’s “Truth-O-Meter” makes it obvious when someone’s claims are untrue, which makes sorting through the hyperbole much easier. Another fun choice is PolitiFact’s Settle It!, which is perfect for ending political arguments around the dinner table.

Stop-the-bullshit is a piece of software that blocks spam sites, which author Jacopo Notarstefano defines as “sites built from scripts” that mostly have an entire catalog of previously produced work that are all “nonsense stories.” Notarstefano notes that stop-the-bullshit doesn’t block websites “that stretch the truth to accommodate an agenda,” or satire sites, “because my objective isn’t teaching critical thinking, it’s just filtering some spam.”