Everything We Know So Far About Google’s Android N

Hiroshi Lockheimer, Google’s SVP of Android, Chrome OS, and Chromecast, wrote on Medium that Google decided to release the preview early in order to get more feedback from developers, and to be able to “act on that feedback while still being able to hand off the final N release to device makers this summer, so they can get their hands on the latest version of Android earlier than ever.” An early release also gives app developers more time to build apps that support all of the features of Android N.

So what are those features? One of the most exciting, especially for users who want an Android tablet that will really live up to its potential, is new multi-window capability. As engineering VP Dave Burke writes on the Android Developers Blog, Android N will enable split-screen modes on both phones and tablets, and app activities can also go into picture-in-picture mode, which would enable video apps to play in the corner of devices like TVs. Multi-window support is a capability that users have been waiting for, particularly because it would make tablets, like Google’s own Pixel C, much more useful when it comes to productivity. 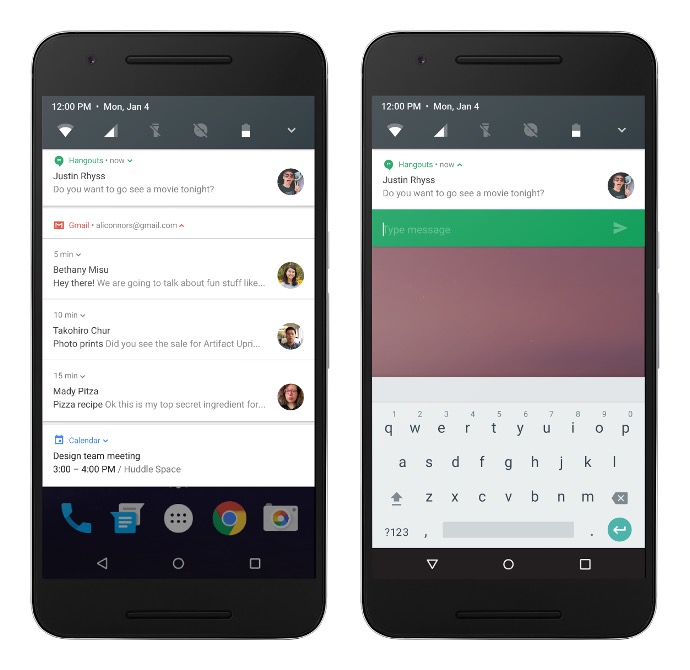 Android N will also bring direct reply notifications, which will enable you to respond to incoming message notifications quickly and conveniently on your phone or tablet. The operating system will also be able to bundle notifications from the same app, and you’ll be able to expand them into individual notifications by using a two-finger gesture or tapping a new expansion button.

The operating system will also get some important updates to increase its power-efficiency. With Android Marshmallow, Google launched a feature called Doze to save battery when a device is stationary. In Android N, Doze will be able to save battery whenever the screen turns off. The operating system will also make background work more efficient, which will reduce the amount of memory that Android needs to run.

Through the new Android Beta Program, you can update your Nexus 6, Nexus 5X, Nexus 6P, General Mobile 4G (Android One), Nexus Player, Nexus 9, or Pixel C to the developer preview of N via an over-the-air update by visiting g.co/androidbeta. The initial release is intended for developers only, and Google notes that it isn’t recommended for daily or consumer use. (Translation: if you have a spare Nexus, it may be worth installing, but you really shouldn’t install it on a phone you need to use everyday.) When the team gets closer to a final product, it plans to invite consumers to try out the operating system, too. The company is currently planning for five preview releases before the final release in the third quarter of the year.

As Emil Protalinski reports for VentureBeat, the Android N developer preview includes an updated SDK with system images for testing on the official Android emulator and on compatible devices. Google is even offering a $150 discount on the Pixel C to encourage developers to help test Android N on a tablet. Finally, while Google hasn’t yet disclosed what it’s calling Android N, Lockheimer ended his post on the developer preview, “what will the N-release be named? We’re nut tellin’ you yet.” The post has many in the Android community betting that Android Nutella is the name of the next release.

Dieter Bohn reports for The Verge after testing the developer preview that Android N is “already really fast and fluid,” though it does have a few inevitable bugs. The animations have been sped up, and Google has paid close attention to the movement of basic OS elements. The multi-window multitasking feature already works well, and can be activated by holding your finger down on the top of a window in the main multitasking view, and dragging it up to a highlighted area. The other half of the screen will then give you a second multitasking view to pick another app, and you can adjust the splitter up and down in portrait mode, or left and right in landscape mode.

With Android N, notifications become much more information-dense — in Bohn’s assessment, “almost to the point of distraction.” However, the new notifications enable users to complete more tasks than ever from the notifications. While he experienced some crashes, Bohn characterizes the software as “much more solid than you’d expect for such an early preview,” and notes that there are welcome refreshes to features like Quick Settings and the main Settings screen. The initial setup process also includes a new Vision Settings button for accessibility features.

Additionally, Dan Seifert reports for The Verge that developer documentation for Android N reveals that the operating system is gaining a new Data Saver mode, which can block background data use and signal apps to use less data when running in the foreground. It will be possible to whitelist apps, so that they aren’t affected even when you have Data Saver mode turned on. The documentation also indicates that Android N will gain system-level number blocking and call screening features, which should make it significantly easier to block spammers and telemarketers. You can expect to hear more about Android N’s features at I/O in May, where Google will likely showcase some features that it hasn’t unveiled yet.