Everything You Need to Know About Movember

Calling all Mo Bros: The hairiest month of the year has arrived. Thanks to the Movember holiday, for 30 whole days in November you have an official hall pass to wear nature’s very own billboard by rocking any and all manners of moustaches — from the classic handlebar to the chevron, the Dali, and yes, even the Fu Manchu.

Because we are all in favor of a month of (well-groomed) facial hair — especially for a good cause — stay tuned for a series of articles that will ensure your moustache is up to snuff for the entirety of Movember. In the meantime, we should begin with a quick primer on the Movember basics if we truly are to celebrate in top mustachioed form next month.

What started in 2003 as Travis Garone and Luke Slattery’s “hair-brained” idea to bring back the moustache — over a few beers in Melbourne, Australia, no less — has become nothing short of an institution. Now, little more than a decade later, Movember has inspired support from more than 5 million so-called Mo Bros (and Mo Sistas, too!) across the world.

But the glorification of facial hair only scratches the surface of the true meaning of Movember. The Movember Foundation is a global charity committed to men living happier, healthier, and longer lives. Since its inception, millions across 21 countries have joined this men’s health movement, raising $650 million, and funding more than 1,000 programs focusing on men’s issues including prostate cancer, testicular cancer, poor mental health, and physical inactivity.

This year, the Movember Foundation has introduced an exciting new addition to the cause. During the month, not only will men be challenged to grow a moustache and women challenged to support the campaign, but now both men and women can choose to be champions of their own health through MOVE. The 30-day fitness challenge invites participants to be more active while still raising funds and awareness for men’s health.

“We are excited to bring back the moustache in 2015 and introduce MOVE. Too many men don’t talk, don’t take action and die too young,” said Mark Hedstrom, U.S. Country Director at the Movember Foundation. “The Movember Foundation’s aim is to not only start conversations about testicular and prostate cancer, poor mental health and physical wellbeing but encourage men worldwide to prioritize their health.” 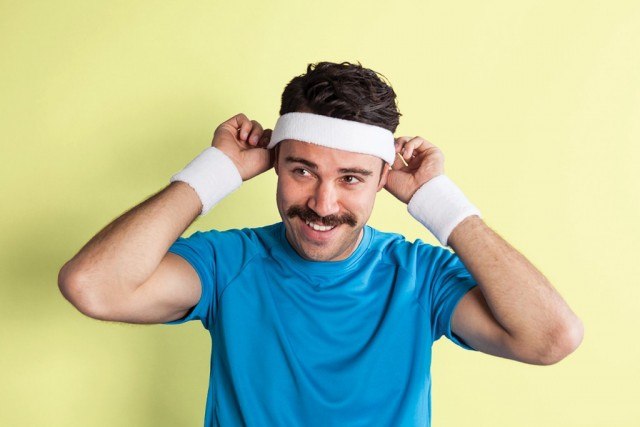 For 30 days, you can turn your face into a walking, talking billboard for men’s health by growing a moustache. It’s all about taking real action for a healthy lifestyle while sparking conversation to raise vital funds and awareness for men’s health specifically in the areas of prostate cancer, testicular cancer, poor mental health, and physical inactivity.

To get started, sign up at Movember.com and choose to “Grow, Give or MOVE.” Men start on November 1 with clean-shaven faces and grow only a moustache for the month. Yes, some people game the system by simply continuing to rock the moustache they already have, or by using Movember as an excuse to go hog wild and become fully bearded. But the real rules dictate a fresh shave from the start.

There is no facial hair discrimination when it comes to Movember because both men and women can (and should) participate — moustache or no moustache — by committing to the MOVE fitness challenge. After signing up, engage your friends, family, and colleagues to donate to your efforts and change the face of men’s health — all it takes is just a moustache or a MOVE, and a smile.

Movember also creates Industry Challenges to bring together companies to compete against other Mo teams in the same industry, rewarding the highest fundraisers with awesome prizes. No matter if you belong to the financial sector filled with power suits and power moustaches or are a part of the healthcare handlebars, the pharma faces, big mo bros on campus, or one of the many other teams, you and your moustache are sure to fit in.