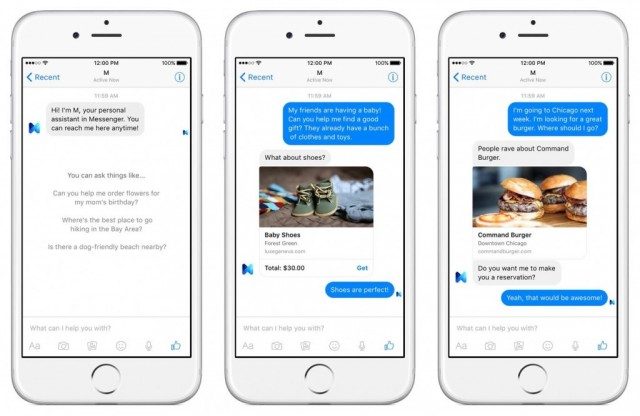 There’s a new personal assistant on the scene — one with which you’ll probably want to get acquainted. In a post on Facebook, vice president of messaging products David Marcus wrote that the social network is beginning to test a personal digital assistant called M. M lives inside of Messenger, and both “completes tasks and finds information on your behalf.” But here’s where it gets interesting: M is powered by artificial intelligence that’s not only trained, but also “supervised” by people.

Facebook is already getting competitive with M rivals like Siri, Google Now, or Cortana, with Marcus writing that “Unlike other AI-based services in the market, M can actually complete tasks on your behalf. It can purchase items, get gifts delivered to your loved ones, book restaurants, travel arrangements, appointments and way more.” Marcus explains that while Facebook is still in the early stages of building M into an at-scale service, Facebook thinks that “it’s an exciting step towards enabling people on Messenger to get things done across a variety of things, so they can get more time to focus on what’s important in their lives.”

Ken Yeung reports for VentureBeat that so far, there’s no timetable on when M will be released to the public. But even at this early stage, the entire narrative around M emphasizes that the personal assistant will be more powerful than similar software from other companies. Even though personal assistant technology is a popular area right now, what companies call a “personal assistant” is actually an incredibly wide area, with a number of different types of products.

Assistants like Siri, Google Now, or Cortana are integrated into mobile operating systems, and therefore have unparalleled dominance among users. They rely entirely on technology. Other assistants, like Assist, Operator, and Magic, or even gig-economy services like TaskRabbit, rely on real people to respond to text-based requests from users. While Siri or Google Now can respond to requests at a scale that would be unsustainable for a human-based service, Facebook is hoping to hit on a winning combination with an intersection between artificial intelligence and actual people.

Jessi Hempel reports for Wired that the first to test M will be “a few hundred Bay Area Facebook users.” And the idea is that these users will quickly realize that M is capable of performing tasks that no other personal assistant can, thanks to its hybrid approach. Hempel reports that a band of Facebook employees, called M trainers, will make sure that every request is answered. Facebook’s grand goal is to make Messenger “the first stop for mobile discovery,” even though the social networking giant is at a disadvantage on mobile because it doesn’t have its own operating system, and people must download and then open an app to enter Facebook’s world. Marcus tells Wired that Facebook can make up for that with a personal assistant so powerful that users will make it their first stop whenever they want to find or buy something.

To try M, users will tap a button at the bottom of Messenger to send a message to M. M’s software will decode the natural language query, ask followup questions via the message thread, and update the user as the task is completed. Users won’t know whether a computer or a person has helped them.

While Yeung speculates that M could use information on your interests, Likes, location, check-ins, and other data you share with the social network to offer you relevant insights, or even leverage the power of Facebook Search, Hempel reports that for now, M doesn’t pull from the social data that Facebook collects. The service will make suggestions based only on your answers to questions either in the current conversation or in any previous conversations that you and M have had. Marcus says that that could change “at some point, with proper user consent.”

In internal tests, Facebook employees have been using M for several weeks. They’ve asked the assistant to help organize dinner parties, track down an unusual beverage, or even call the cable company and endure long hold times or automated messages. In that last use case, a person sits on hold for you. M trainers have a background in customer service, and are there to make judgment calls and to perform tasks that software can’t. Hempel explains, “If you ask M to plan a birthday dinner for your friend, the software might book the Uber and the restaurant, but a person might surprise your friend at the end of the night by sending over birthday cupcakes from her favorite bakery.”

Eventually, the software could be sophisticated enough to figure those things out on its own. But Marcus doesn’t anticipate that happening anytime soon, and tells Wired that Facebook anticipates employing thousands of M trainers. The idea is that the sizable cost of hiring thousands of contractors will be offset by the revenue growth brought by M’s interactions and transactions. M will likely bring a host of new business opportunities for partnerships with other businesses.

Though M’s expansion will take time, Marcus expects that the personal assistant will eventually reach everyone. As it does, the software’s repertoire of tasks will likely grow. Though Facebook is beginning M’s rollout to a demographic similar to its trainers — who might ask for assistance thinking of a birthday gift for a partner, planning a vacation, or booking an Uber — Hempel reports that Marcus is just as eager for M to help users access food stamps or find last-minute childcare.