Give These 4 Unique Hair Cuts a Try

These unique hair cuts will switch up your look | Source: iStock

You never need an excuse to try a new hairstyle, but we’re going to give you an excuse anyway: It’s officially summer, so why not try something different with your ‘do? If you’ve been rocking the same style for a few seasons, it’s time to pull your hair out of your man bun, give your barber a call, and once you’re in his or her chair, ask for one of these new ‘dos. We guarantee you won’t regret it.

Is there anything David Beckham doesn’t do that can’t inspire us to be and look like him? It’s tough to not look at him and not think he’s the most effortlessly cool guy on the planet. The refined hipster cut is definitely of the moment, and for men that are looking to add a little edge to their look — this one’s for you. It works great on men of all ages and it may even add a little height. “This one’s an attention getter,” says Elle Medico, men’s grooming expert at Paul Labrecque Salon and Spa to Men’s Fitness. This cut is perfect for men with straight to wavy and fine to medium, but steer clear of this look if your hair is very thick or curly. Once you’re in your barber’s chair, ask them to leave at least three inches on the top to build up the pompadour look. As for the sides, you can keep them very short or slightly longer depending on your personality and style.

When styling on your own, take a blow dryer and blow the top straight back to give it body, and once it’s dry, use a strong hold product like Vitaman Pomade to softly keep your style in place. You can also keep it messy and unkempt looking on top for a rocker/surf vibe.

This cut exemplifies the free and careless nature of the season ahead. Leah Shields of Blind Barber in Los Angeles tells GQ that the textured chop is 2016’s answer to the flawless fades and precise comb-over trends that were on the domes of every stylish male this past year. This year’s hair is a lot less exact, and more free-flowing. “One word for 2016: texture,” says Shields, “The fade will be growing out and texture will be growing in.” This textured chop, seen on the likes of Zac Efron, is an unstructured and relaxed ‘do that works great on any texture or thickness of hair.

A man getting a hair cut | Source: iStock

We know what you’re thinking: “Bowl cut? Are you kidding me?” Hear us out before you veto this one. As we’ve said before, the 90’s are indeed back, so it would make sense that 90’s inspired ‘dos would also be making their way back into style as well. We introduce you (or re-introduce for that matter) to the 90’s bowl cut with a modern 2010’s twist. This style was selected by Fashion Director of GQ Style and catwalk show stylist Elgar Johnson for the the GQ Grooming Awards 2016 — so let’s just say, this is a pretty dope (and official) style to try.

Johnson says that the style, created by Fudge Professional creative director and stylist John Vial, was indeed inspired by “Ninties bowl hair, captured as if the boys have been out at the Hacienda dancing all night long. Envisage a wet, sweaty raver!” Follow these steps from Vial to create this utterly cool look, and tell your barber to keep your hair longer in the front so it looks fringy. This works well on straight and fine to medium textured hair. 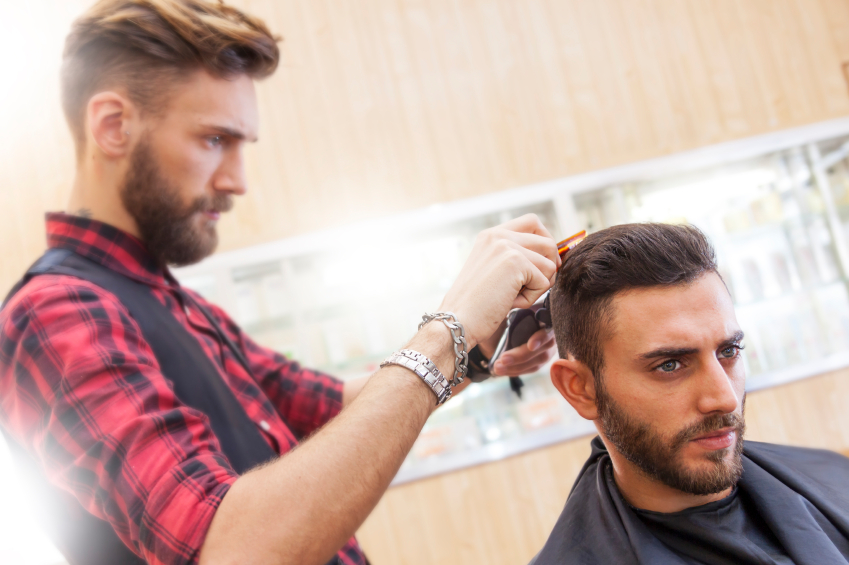 Getting a hair cut | Source: iStock

Yet another 90’s-era inspired style, circa the ER-era George Clooney. The Caesar, which was originally a shorter do, is different today, so grow it slightly longer than the original style and feel free to give it a little texture too. It’s simply handsome and incredibly low-maintenance. Shorty Maniace, founder of San Francisco’s J.P. Kempt Barber Social, tells GQ, “I think that a loose Caesar is going to make a comeback. Matter of fact, I think it’s going to be major. It’s a classic cut, with a modern twist.” Plus, this ‘do looks good on any man with any kind of hair.