Google’s New Streaming Apps: What You Need to Know 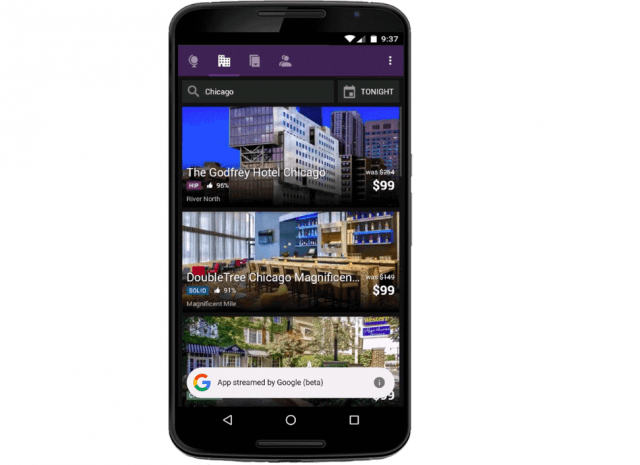 When you’re conducting a Google search from your smartphone, it can often be difficult to take full advantage of all of the information that’s on your phone, hiding within your favorite apps. But Emil Protalinski reports for Venture Beat that Google is starting to solve that problem; it’s begun indexing Android apps that don’t have matching web content and experimenting with a way to let users stream apps that they don’t have installed on their smartphones.

So far, Google has only indexed apps that have matching web content, meaning apps that corresponding websites that feature the same information. But with its most recent experiments, Google is going after content that exists only in apps or provides a poor user experience when it’s accessed online.

Sarah Perez reports for TechCrunch that the debut app partners were all chosen because they expressed interest in testing out Google’s app-only indexing functionality when it was announced at Google’s I/O developer conference. Developers just need to implement Google’s app indexing API, which enables Google to understand what a page is about and how often it’s used.

If you don’t have a given app installed, Google will now let you stream the app’s content as long as you have a reliable Wi-Fi connection. That means that you won’t have to install the relevant app to find the information you’re looking for, and you can even accomplish tasks like booking a hotel room without installing the app. When these apps show up in search results, they’re accompanied by a “Stream” button; tap that, and you’ll get a streamed version that you can interact with as if you’d installed the app on your phone.

Google has been testing various levels of app indexing for the past two years. Perez notes that its work in the area is widely perceived as a measure against the search giant’s potential obsolescence in a world that increasingly relies on the content in apps, not on the open Internet. Google has incrementally expanded its ability to surface deep links, which point to pages or content within an app, and now indexes apps on both Android and iOS.

Google typically rolls out app indexing features to Android first, afterward expanding the functionality to its apps on iOS. Both of the new features follow that pattern, and are available so far only on Google’s mobile operating system. Rajan Patel, Google’s director of mobile search, tells VentureBeat, “We want to make sure users are engaging with this app-only content” and that “the streaming experience works well.” He adds, “If users enjoy it, and we see they’re using it, we will expand the scope.”

So far, Android Lollipop is required to take advantage of the feature. Tablets aren’t yet supported, and the search has to be conducted through the Google app, which means that streaming won’t work through Google’s mobile site. While the streaming technology is built into Google’s app, you won’t be able to stream just any app. A Google spokesperson told VentureBeat that the participating apps are running on virtual machines on the Google Cloud Platform. “It’s similar to a streamed video, but interactive, with swipe, tap, etc. signals being sent to the streamed app in essentially real time. We are experimenting with a few apps initially to get the user experience right, but we are looking to scale to more apps soon.”

If the experiment goes well, the innovation could change how you search for in-app content from your smartphone. Google now has more than 100 billion deep links into thousands of apps in its search index — including popular apps like Facebook, Instagram, Airbnb, and Pinterest — and more than 40% of Google searches on Android now surface app content. Google also points users to apps that they can install on their smartphones and tablets when it finds content related to a search query inside those mobile apps.