10 Grammys Looks Everyone is Talking About Today

The Grammy Awards are known for incredible music performances and show-stopping, albeit controversial, looks. As expected, last night’s ceremony was chock-full of good, bad, and questionable outfits. You could go to any site to read all about the best ensembles of the night, but if you’re curious about which looks might go down in Grammy history, we have just the thing for you. 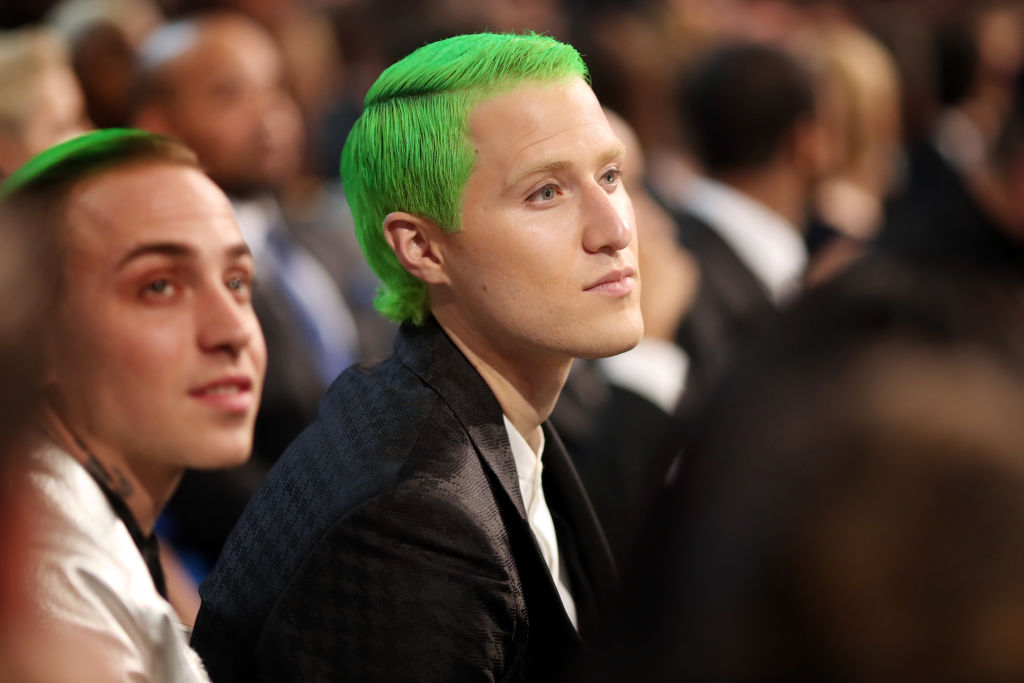 If this isn’t the epitome of life imitating art, we really don’t know what is. His bizarre red carpet antics aside, we simply cannot get over that hair. Is it just us, or are you getting major Suicide Squad vibes, too? Though Mike Posner isn’t the first one to wear shorts on the red carpet, pairing them with chunky combat boots felt like a nod to Kurt Cobain. 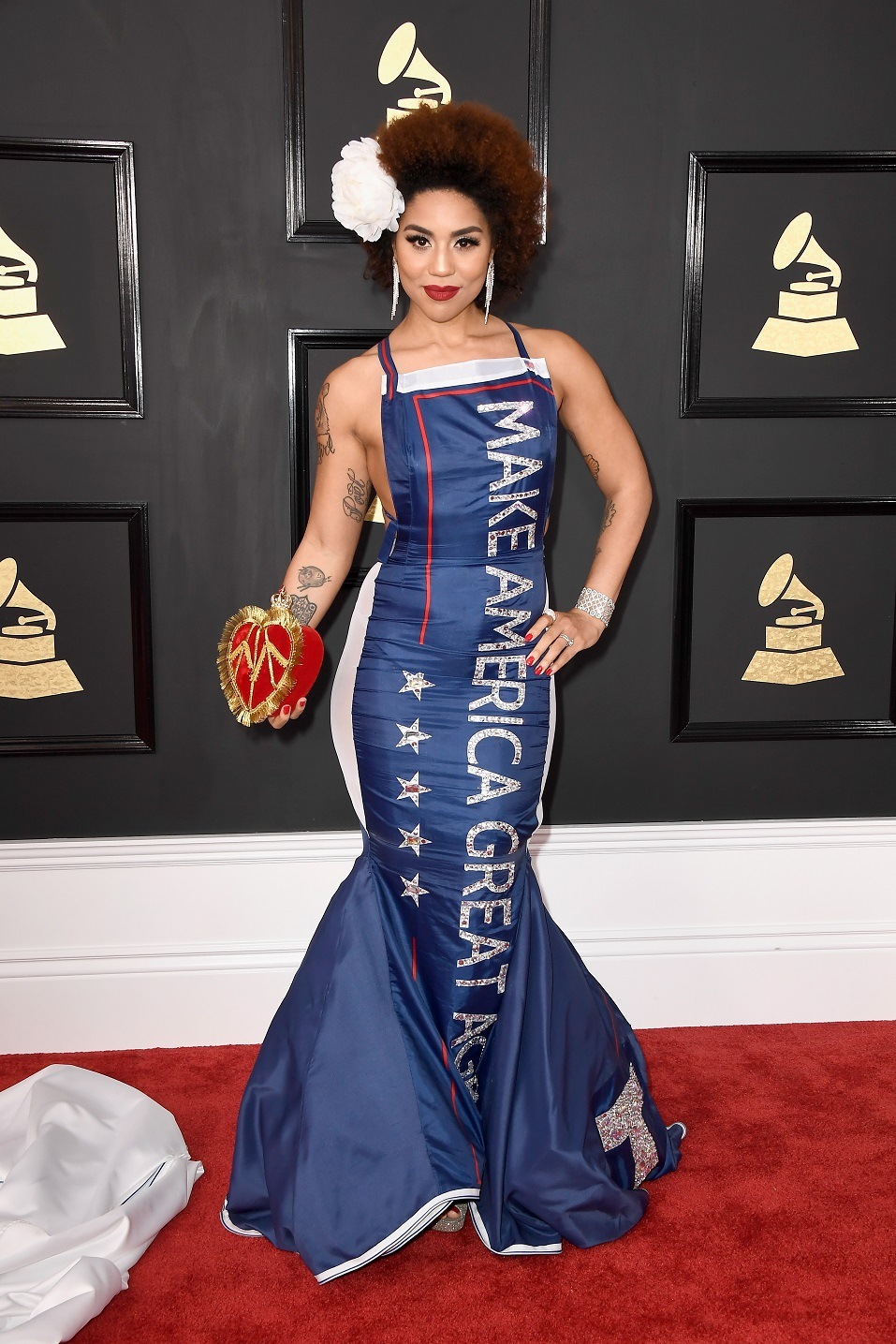 Joy Villa made quite a statement | Frazer Harrison/Getty Images

Anyone who was “with her” this election might want to shield their eyes. When singer Joy Villa stepped onto the red carpet, she was sporting a modest white cape and a cute heart clutch. Somewhere before entering the ceremony, though, she ripped off her cape and revealed a dress adorned with Trump’s campaign logo. Regardless of your political views, we can all agree this was one of the most talked about looks all night. 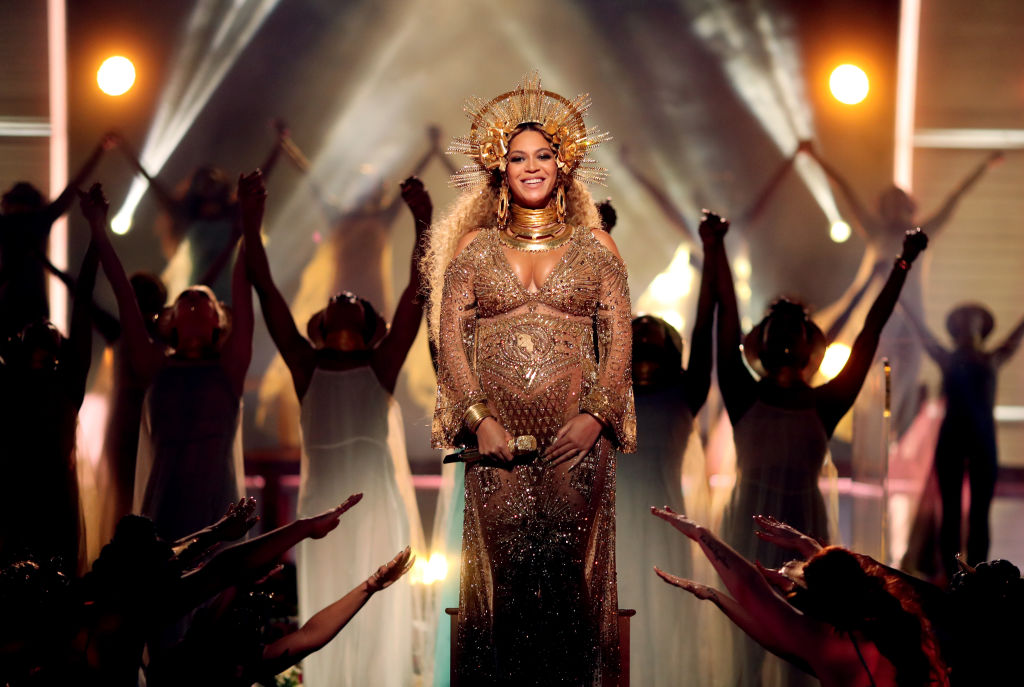 Ask anyone who keeps a finger on the pulse of the music industry and they’ll tell you Beyoncé is America’s queen. So it should come as no surprise the superstar sported a series of looks, all courtesy of Peter Dundas, and looked like a sun goddess.

Though some of the outfits veered toward costume territory (it’s the Grammys! Also, it’s Beyoncé!), if not now, when? Currently pregnant with twins, Beyoncé looked gorgeous and we believe last night was a career defining moment for her, sartorially speaking. 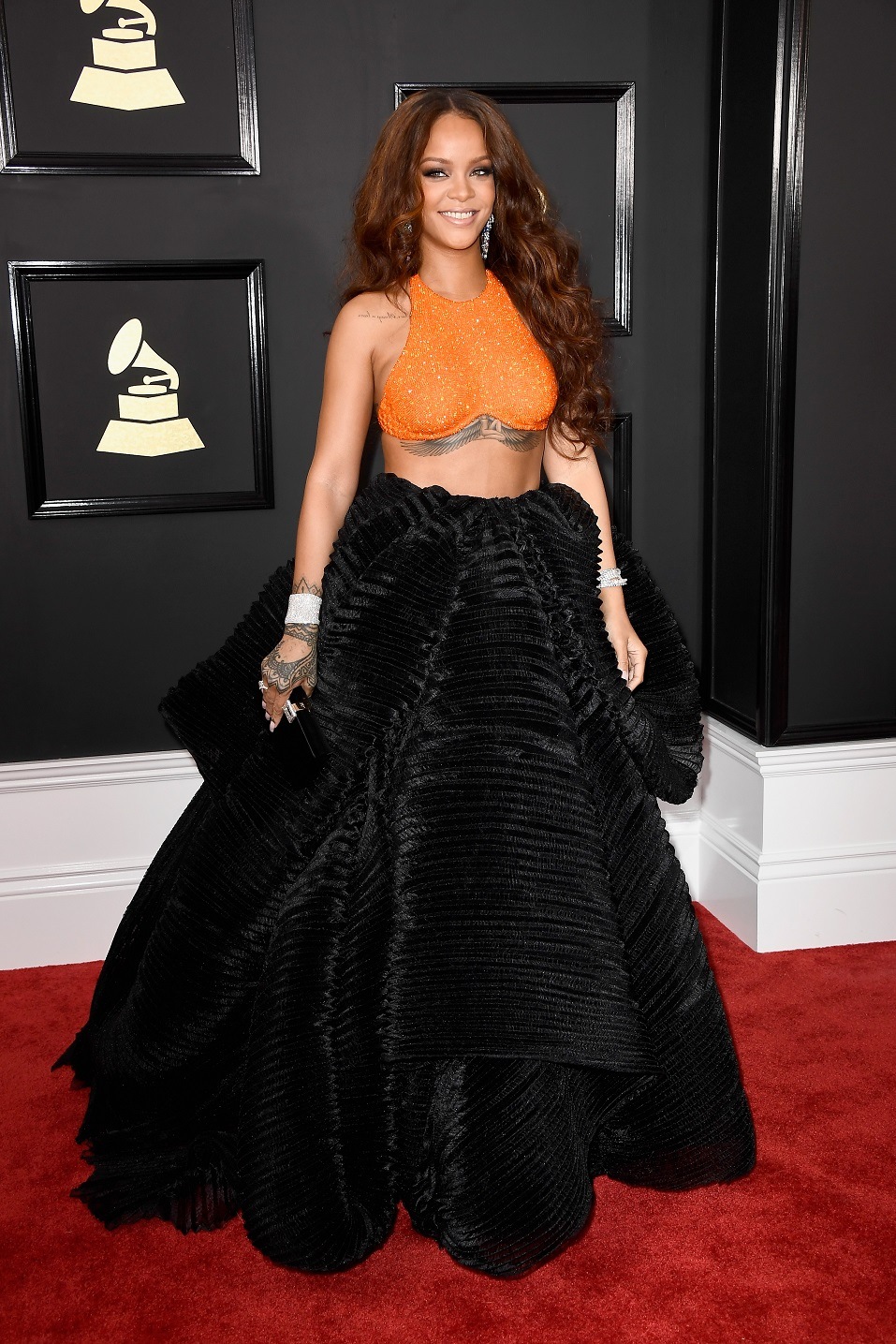 Rihanna could wear a burlap sack on the red carpet and still look fantastic. Naturally, this frilly Armani Privé look worked perfectly. Since most attendees sport skin-grazing dresses, a voluminous skirt and crop top does feel like a major risk. However, Rihanna wears every outfit with the utmost confidence, so most of her sartorial gambles pay off. Plus, anyone who can make an orange and black combination look cool, and not like a Halloween card, has our respect. 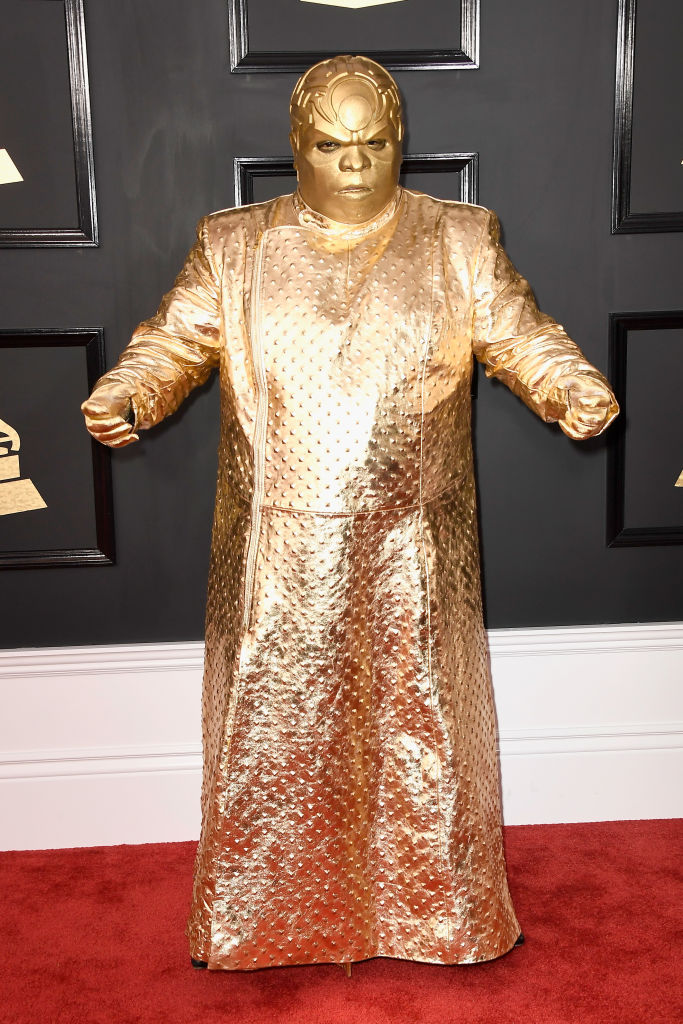 As expected, the guys were responsible for some of the zaniest looks on the red carpet. CeeLo Green is known for his various performing personas (anyone remember Gnarls Barkley?) and accompanying costumes. But his newest character, Gnarly Davidson, is downright terrifying. Between the head-to-toe gold and a mask we’d likely spot in a Marvel movie, Green looked more like an outlandish street performer than a star. This attire is crazy enough to go down in history. 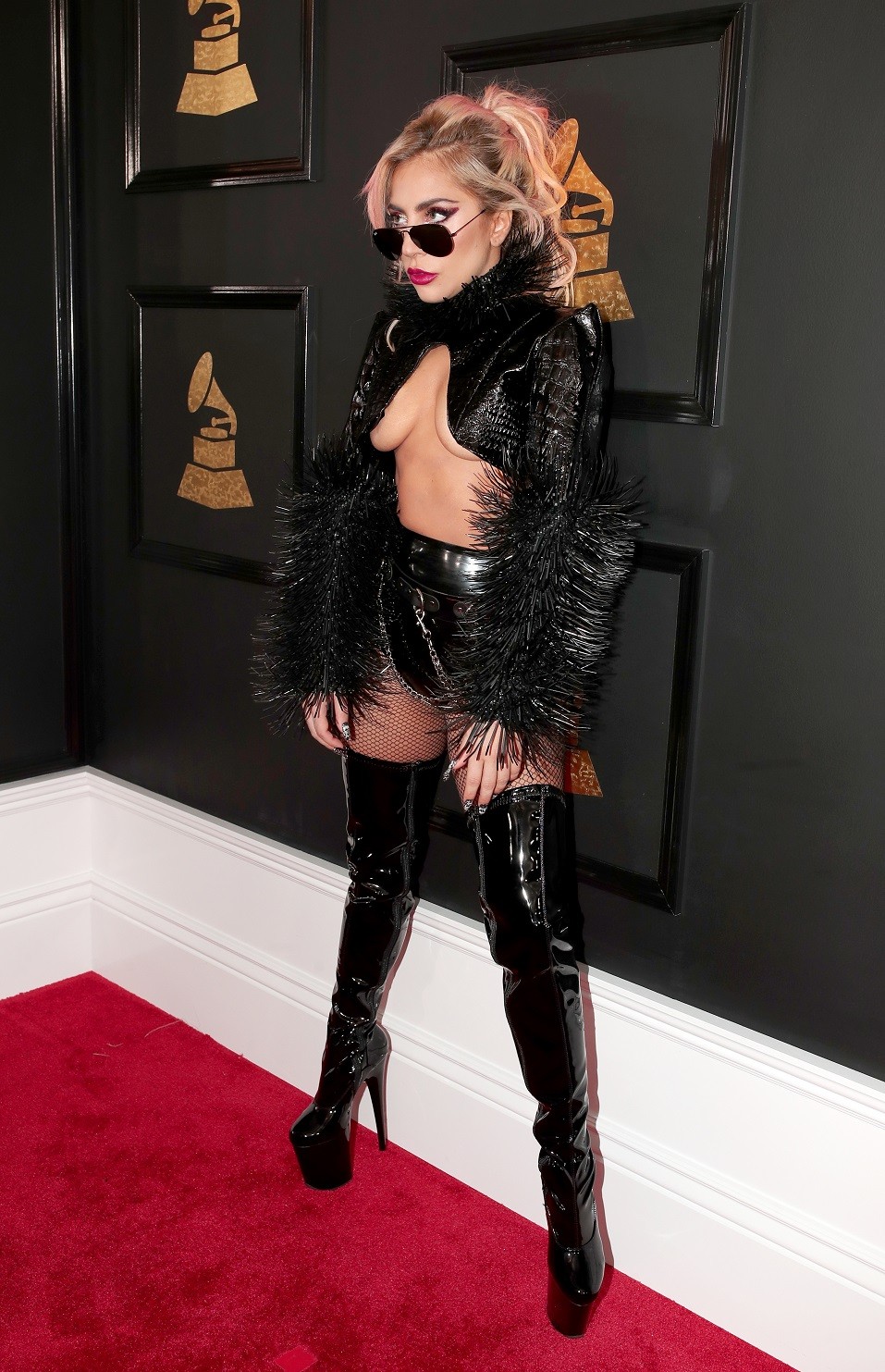 A simple Google search will show you Lady Gaga’s style has never been boring. However, once the “Bad Romance” singer started collaborating with Tony Bennett, her outfits began to veer toward normal. Dressed in Alex Ulichny, this biker look perfectly married Gaga’s notoriously zany style with a wearable ease. Sure, it’s no meat dress or egg, but it caught our eye. 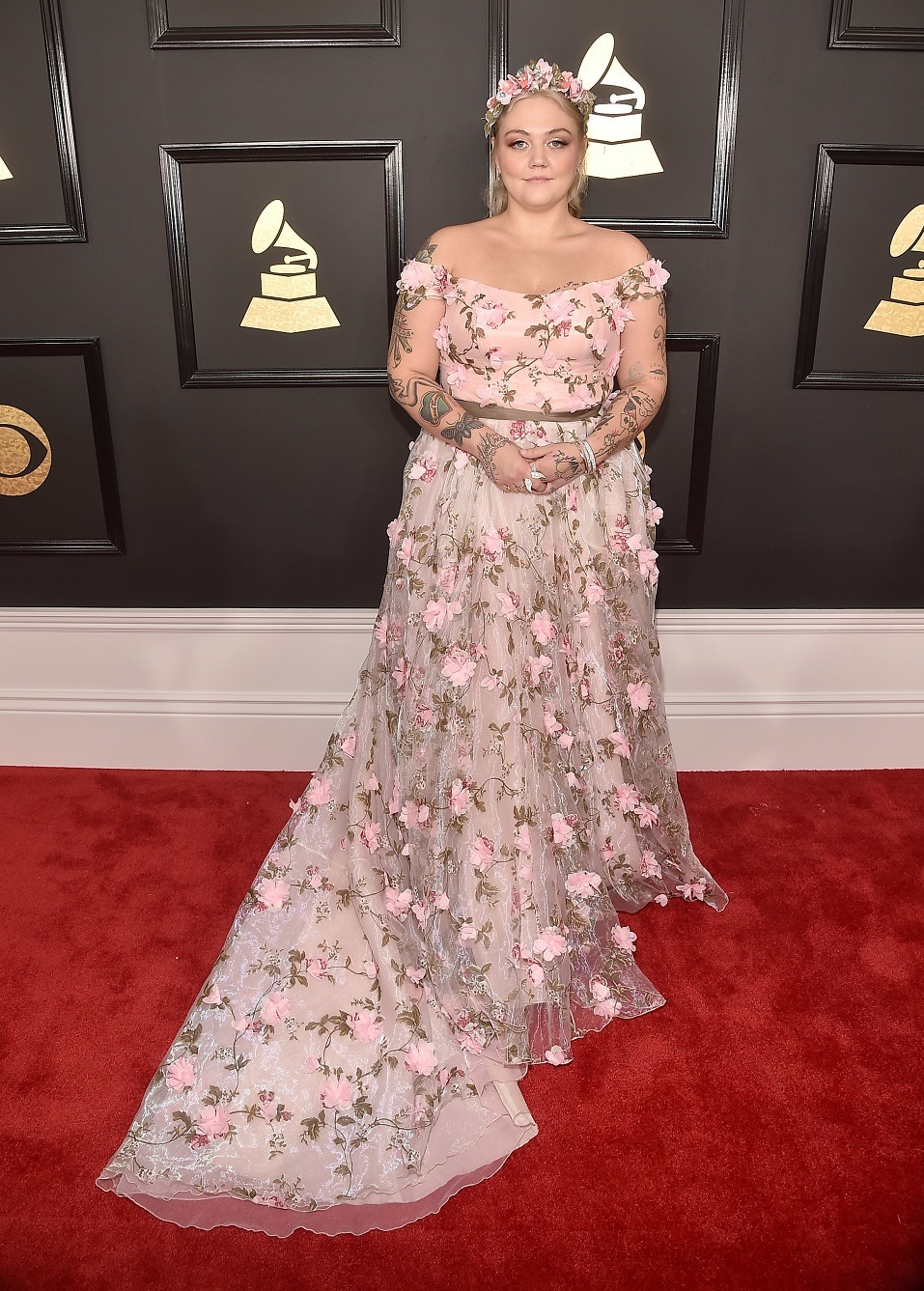 Some women use their wedding day to dress up like a princess, others use the Grammy’s. Though Elle King is relatively new to the music industry, her flower power getup grabbed a lot of attention last night. Between the floral crown and appliquéd dress, King’s Teuta Matoshi creation received a lot of flack for being too much. The attire was too reminiscent of a Renaissance fair, but we have to applaud Matoshi for committing to a theme and wearing it with pride. 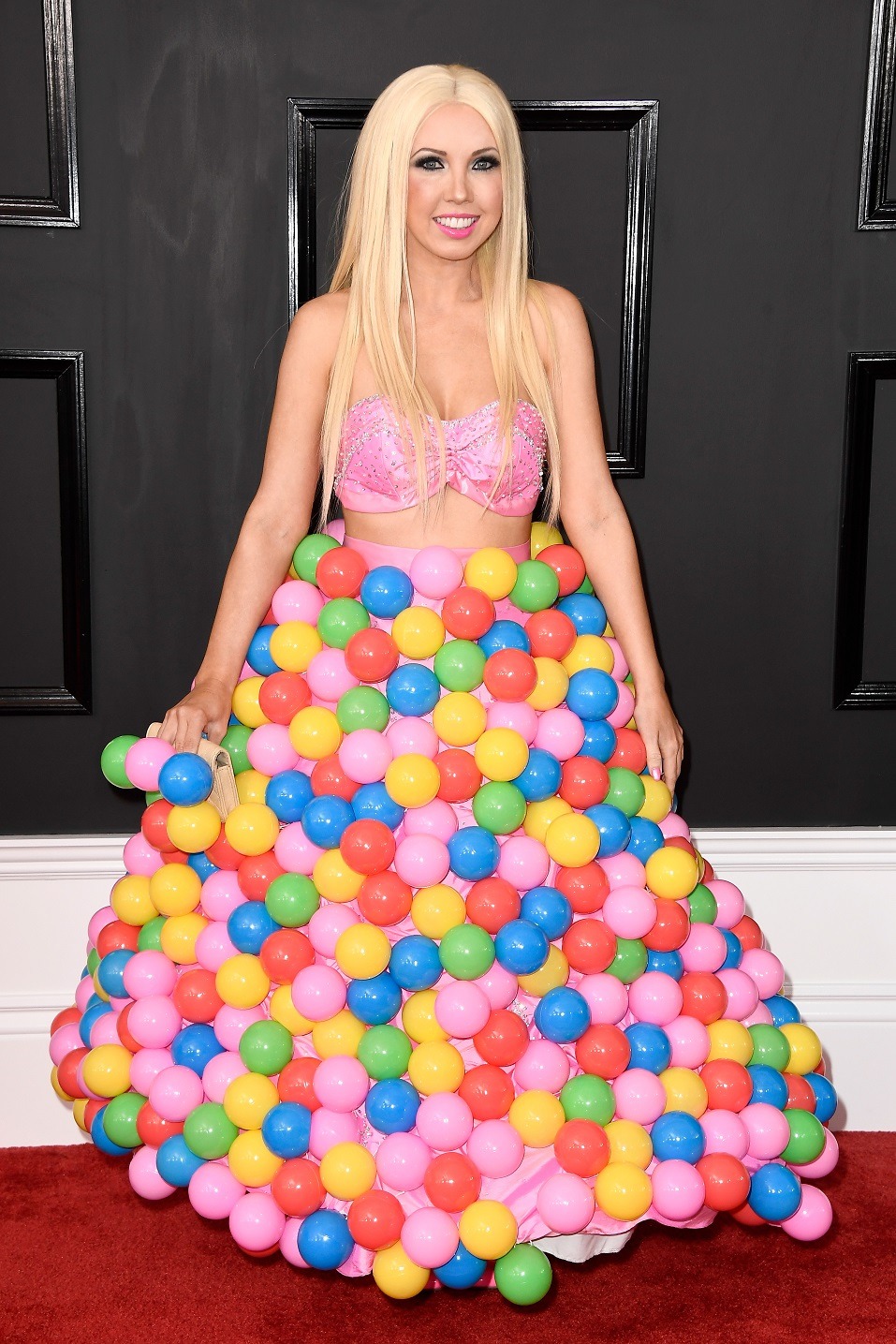 Every Grammy’s red carpet has that one star who tries a little too hard to make a statement. This year, it was Girl Crush. Look, we’re all for nostalgia, but her skirt and appliquéd bag looked like a trip to Chuck E. Cheese’s gone wrong. And paired with a strapless bikini top, this outfit was too arts and crafts for our taste. We have so many questions for the singer, starting with, “What were you thinking?” 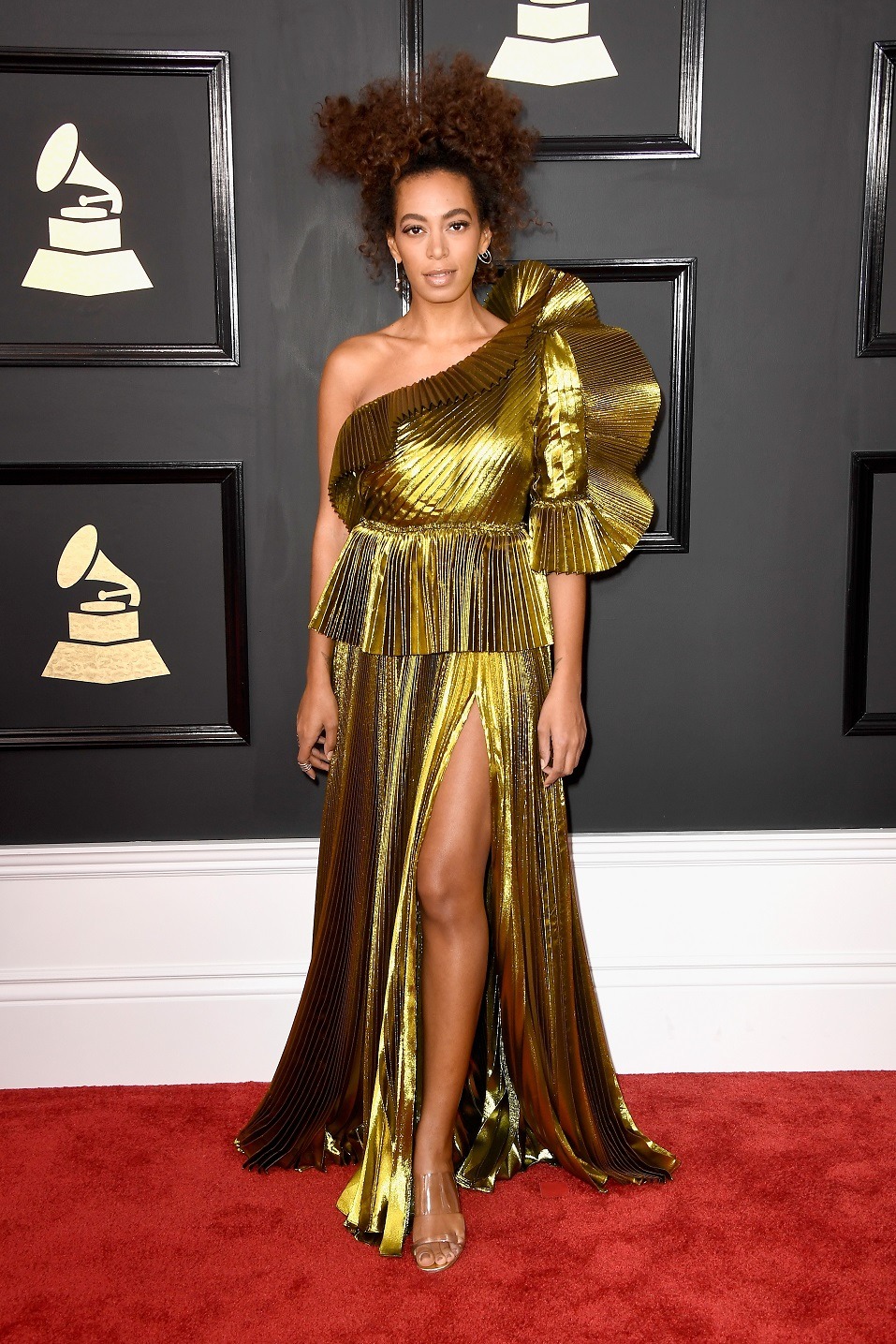 Though this Gucci getup wasn’t as lavish as Beyoncé’s multi-look night, you have to hand it to Solange: She knows what she’s doing on the red carpet. Though Gucci designer Alessandro Michele is the fashion industry’s current golden child, some of his looks don’t translate well on the red carpet. This was a fantastic exception. From the hair to the dimensional dress, everything about this look was just eclectic enough for the Grammy’s without looking like CeeLo Green. In layman’s terms? Solange looked cool, and we liked it. 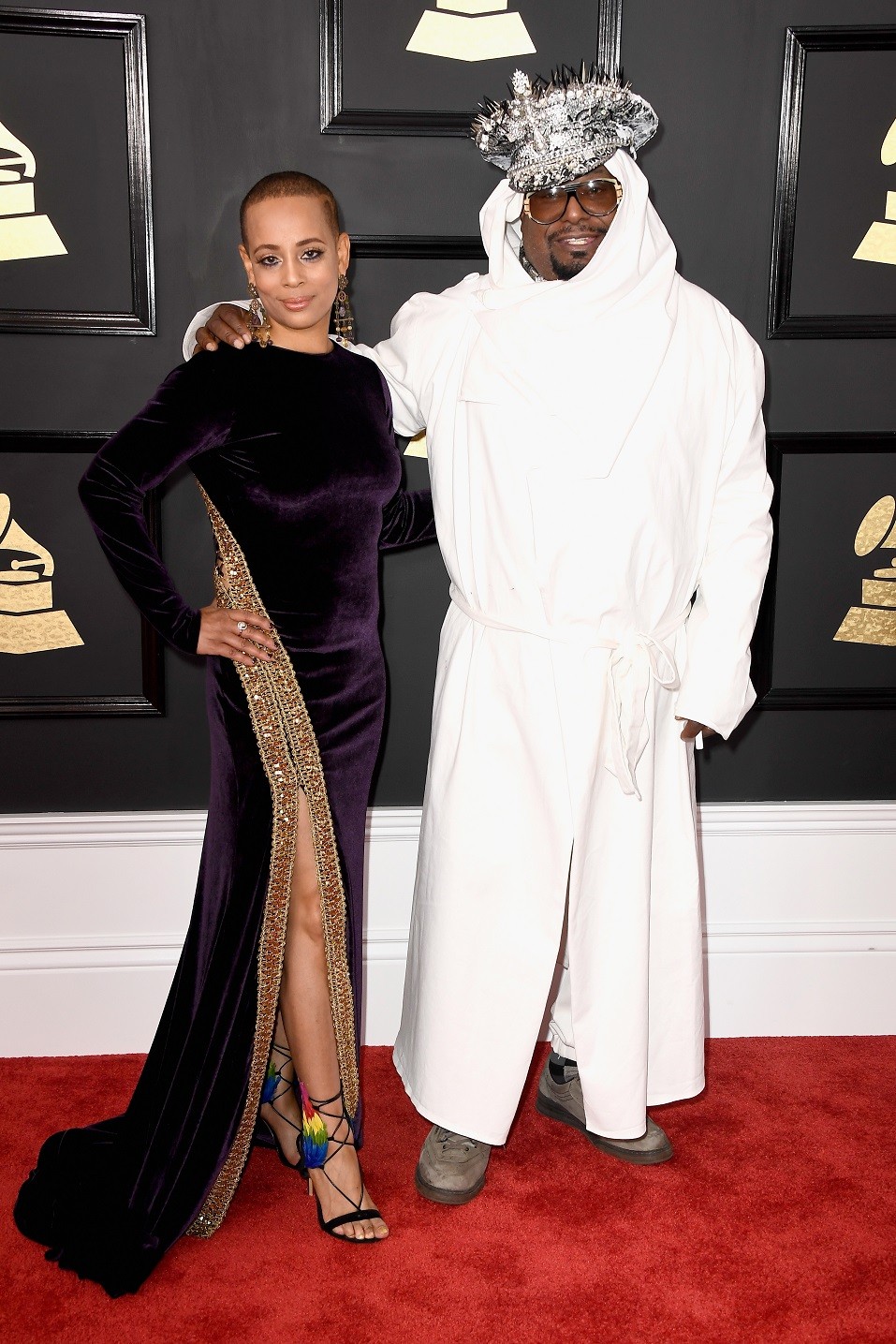 We were almost too focused on Adele’s sweep and Beyoncé’s epic performance to notice George Clinton’s bizarre look, but nevertheless, it is a major talking point. The singer is known for his impressive music career and colorful hair, but this ensemble felt more like a last-ditch effort to get some attention.

It is the Grammys, so wearing a traditional black tuxedo would be boring, but if you’re going to up the ante and dress outside of the box, there needs to be some consistency. A pair of hiking boots, draped robe, and spiked hat are so mismatched, it’s like he was too busy playing dress up to even prepare for the event.