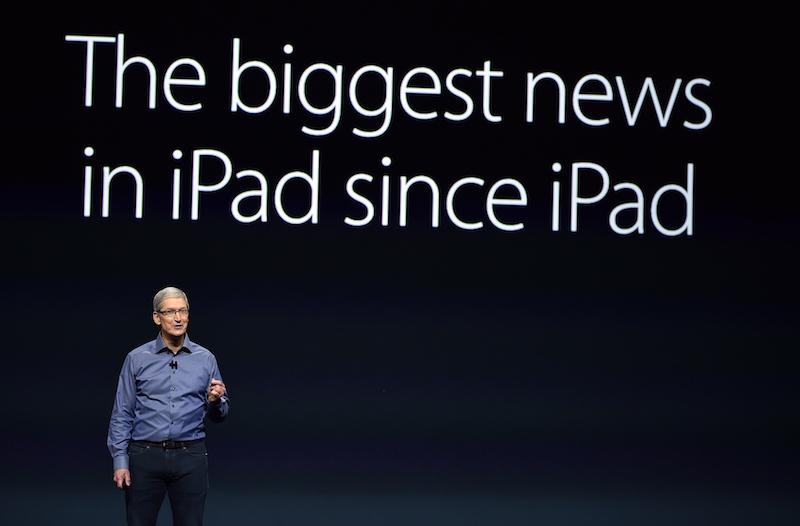 While Apple may be the most-discussed company among American consumers, it’s no mistake that many in the tech world have been looking back at what the company created and announced in 2015. As with most things Apple, opinions vary widely — ranging from Mario Aguilar writing for Gizmodo that “everything Apple introduced this year kinda sucked” to Luke Dormehl at Cult of Mac characterizing 2015 as “Apple’s most important year since original iPhone’s unveiling.”

It’s only logical that opinions on how Apple did are going to vary, and vary widely. But the reality is that a lot changed for Apple over the course of 2015. And regardless of whether you think that those changes are good changes or bad changes, they’re all pretty interesting.

As Dan Frommer reports for Quartz, one of the biggest changes that Apple fans noticed this year was how the company presented itself to the public. More of its executives spent time in the public view, with chief executive Tim Cook granting a large number of interviews and making a wide array of public appearances, chief design officer Jony Ive offering a look inside the company’s design process, and chief operating officer Jeff Williams representing the company at the Code conference.

Tim Cook’s Apple demonstrated a significant change over the Jobs-era Apple simply by exchanging infrequent public appearances and an emphasis on privacy and opacity for a new willingness to grant the media access to its facilities and executives. Cook’s Apple has also tried to do its part to address some of Silicon Valley’s longstanding diversity issues, such as by shuffling the traditional lineup at keynote events to include more female executives, like Jennifer Bailey, who announced updates to Apple Pay; Susan Prescott, who unveiled the News app; and Jen Folse, who helped unveil the new Apple TV.

Another big change came in the form of the new products that Apple announced in 2015. While the past decade of the company’s growth and revenue has been dominated by the iPhone, Apple placed “two bets on the future” this year: the Apple Watch, which dominates a nascent and still niche market, and its updated Apple TV set-top box. As Frommer notes, the Apple TV was widely received as a declaration of Apple’s belief that apps are the future of TV (a belief we don’t quite agree with). The stakes aren’t incredibly high for Apple, but if it can create a dominant platform for television, it stands to gain significantly.

More importantly, as Frommer points out, Apple doesn’t often launch new platforms, especially not two at a time, or in a year in which it’s also updating the iOS and OS X, shipping a new version of the iPhone, releasing a new MacBook design, and introducing a new supersized iPad. As Apple diversifies its efforts and does more, customers have complained that the company is getting sloppy. Apple Music, for instance, suffered a number of bugs and set off alarms about software quality.

As Nilay Patel writes for The Verge, characterizes 2015 as “Apple’s year in beta,” all of the products that Apple released this year were just fine. But the problem is that even products that are just fine fall short of the astronomical expectations that many fans have for Apple. “We’re not used to Apple being just fine. We’re used to Apple being wildly better than the competition, or sometimes much worse, but always being ahead of the curve on some significant axis,” Patel explains. “But what we got in 2015 was an Apple that released more products than ever, all of which felt incomplete in extremely meaningful ways — ways that meant that their products were just fine, and often just the same as everyone else’s.”

Patel argues that every new product and feature that Apple introduced in 2015 felt more like a beta version of the product than a final release. Apple released platforms that were incomplete, and instead depended on third-party developers to create the killer apps to sell those platforms (think of the Apple Watch or iPad Pro, or even the 3D Touch feature that Apple added to iOS). Patel notes that while investors and analysts have expected that Apple would deliver something that, like the iPhone, would change the world, it struggled to deliver that new product this year. He explains that “while the company delivered on dazzle and hype — sometimes far more than usual — the products themselves often felt searching, waiting to be imbued with reason.”

Despite all this, Apple managed to launch new platforms that may not be particularly likely to become huge revenue drivers, but at the same time, won’t hurt the company too badly if they fail. Whether Apple can keep growing or not was a relevant question in 2015, and even more relevant as we move into 2016. It’s unclear whether iOS can continue to take market share from Android, whether Apple’s new iPhone Upgrade program can convince consumers to buy new iPhones more often, and whether Apple can continue to grow in China. In Frommer’s assessment, Apple’s activity and performance in 2015 have shown that Apple has simply grown up — which may be the biggest change for fans, analysts, and investors to become accustomed to.