How Microsoft’s New Phones Put Android and iOS to Shame 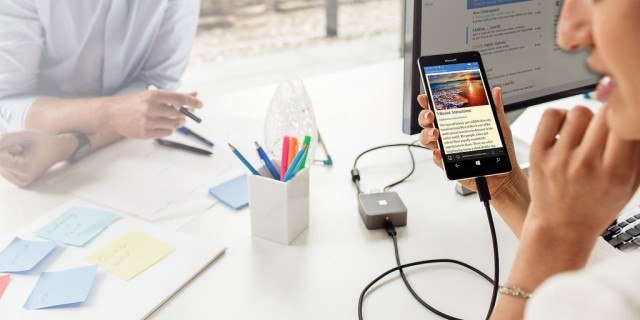 At its October 6 hardware event, Microsoft unveiled an array of new devices. But the most significant one could turn out to be one of the smallest: the palm-sized Display Dock that enables a new feature called Continuum and turns a Windows 10 Mobile device into a PC with the use of the monitor, keyboard, and mouse you probably already have on your desk.

Tom Warren reports for The Verge that the feature works surprisingly well, as he learned when attaching the new Lumia 950 XL to a Display Dock through a USB Type-C connection. “Continuum is pretty basic right now, but the features it has work well.” The interface instantly looks like a Windows 10 PC — though typing in the Start Menu, splitting apps side-by-side, and minimizing windows are PC features that don’t yet work with Continuum. Each app launches in a fullscreen view, and Windows 10’s task view feature enables you to switch between apps. You can also use keyboard shortcuts, like alt-tab to switch apps or ctrl+c and ctrl+v to copy and paste.

While this is going on, you can still pick up and use your phone as you normally would. If you open an app that’s currently displayed on the monitor, it will minimize on the monitor and resume on your phone. That means that you can’t run Outlook, for instance, on both screens. But you can complete a variety of other concurrent tasks, like sending SMS messages while you’re working on a Word document or editing a PowerPoint presentation.

Continuum is primarily designed to work with Microsoft’s own Windows 10 Mobile apps, but will also work with third-party apps whose developers have created universal apps that can scale up in Continuum mode. Microsoft says that resolution support maxes out at 1920×1200 at 60fps in “compatible apps,” though we’re not sure yet how many or which apps will be compatible.

Chris Davies reports for Slash Gear that the Display Dock — the piece of hardware that makes all of this possible in the first place — features a single USB Type-C port on one side and three full-size USB ports plus one USB Type-C, HDMI, and DisplayPort on the other side. Power is provided by the second USB Type-C port, which can both power the box and recharge the connected phone simultaneously. A USB Type-C port is able to combine power, data, and video signals into one “high-bandwidth pipeline,” which makes it possible to connect your phone to a desktop full of peripherals through a single port.

Davies reports that with the advent of the Display Dock, regardless of its limitations, a future when your smartphone will be both your phone and your “dockable computer” is in sight. Continuum is a crucial piece of making Windows 10 into a universal operating system you’ll want to use on your phone as well as on your computer. As CNET reported at the time, Joe Belfiore, Microsoft’s corporate vice president of the operating systems group, said at the company’s annual developer conference, “With Continuum for phones, we believe any phone can be your PC.”

While the implementation of Continuum is basic so far, it still puts the option on other operating systems to shame. Joe Levi reports for PocketNow that many Android phones, for instance, already use Qualcomm processors that have long been capable of driving multiple displays, and the Android operating system has been able to handle various layouts since version 3.0. While Android could enable a Continuum-like experience, Levi notes that most Android apps won’t run well on both a phone and a tablet. “Developers simply haven’t built their apps to work on both platforms — let alone desktop-sized monitors. That’s the true failing.”

Apple has implemented a variety of Continuity features — including AirDrop, iPhone calling and SMS messages on iPad and Mac, and Handoff — to link software across Apple devices. As Apple’s website explains, you can start an email, edit a document, or surf the web on one device and pick up where you left off on another. Despite the similar names, Continuity is very different from Continuum in that Apple’s version links tasks on two different operating systems and keeps those operating systems separate, while Microsoft’s makes its possible to use the same operating system on multiple devices and gives you the flexibility to choose how you want to use the software on a given device. That’s something that neither Google nor Apple seems to be trying to accomplish.