How Pebble Is Challenging the Apple Watch 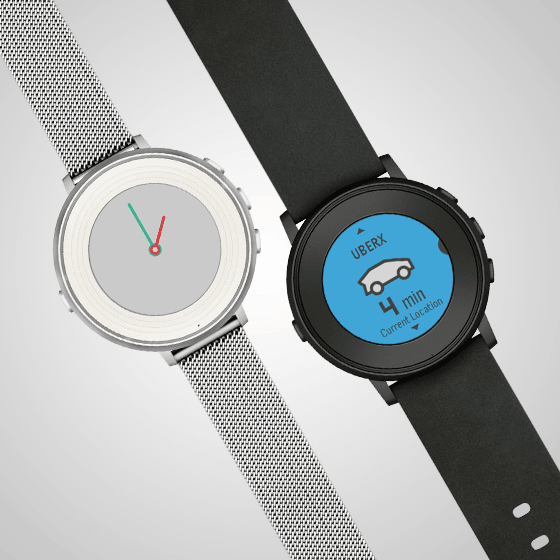 The Apple Watch reigns at the top of the smartwatch pack, where it’s the most popular wearable — and among the most expensive — device available. But that isn’t stopping smaller smartwatch makers, like cult favorite Pebble, from challenging the Apple Watch and its underlying strategy from the opposite end of the market.

Steven Levy at Backchannel reports that the Apple Watch aspires to the class of luxury watches made by Rolex, Omega, and Patek Philippe — an assertion most recently backed up by Apple’s unveiling of a watch made in collaboration with Hermes, one of the most respected names in the fashion world. But Levy notes that fashion “also embraces the funky and the fun,” which explains why Swatch sells millions of watches, and also brings us Pebble, a small company that Levy says is now making “the smartwatch equivalent of the Swatch.”

Levy reports that Pebble has achieved that with the Pebble Time Round, a watch that’s 7.5mm thick — compared to the 11.4mm new Moto 360 or the 10.5mm Apple Watch — and features a leather band that “crosses the threshold where it looks like you’re not wearing one of those gadgets, but just…a watch. A watch that happens gives you email, sports scores, weather, texts, calendar items, and advance notice when hurricanes are coming.”

No one expected the Pebble Time Round, at least not this year, because in February, the company rolled out the Pebble Time on Kickstarter. On the first day of the Kickstarter campaign, more than 40,000 people ordered $9 million worth of Pebble Time watches. “We sold a hundred thousand Pebble Times on Kickstarter within thirty days,” Pebble Chief Executive, Eric Migicovsky, told Levy. “And then [two weeks later] Apple came through and sold anywhere between 1.5 and 3 million” in the first weekend of the Apple Watch’s availability.

The Apple Watch, and some of the Android Wear watches that compete with it, can do things that Pebble can’t. The Apple Watch enables users to complete sophisticated smartphone tasks, with its impressive screen and an array of powerful sensors. But Migicovsky says that such smartwatches, with their “cell phone-class technology,” can only improve as quickly as the technology allows them to. And they’re locked in to high costs and performance.

“We, on the other hand, are following a curve that is much cheaper by default, but have different options,” Migicovsky tells Backchannel. “Those other guys can’t go down  —  they can’t fundamentally get down to our level without dramatically changing their course of curve [because they have set the feature baseline at a very high level]. Whereas we can easily jump up and say, okay well there’s actually a sensor that the other guys are using, we can incorporate that into our technology.”

Pebble’s approach affords the company its pick of technology for new features for its products, but also enables low-cost implementations that other smartwatch manufacturers have ruled out. And Levy reports that the “populist” strategy has other advantages. Pebble’s watches are compatible with both Apple and Android smartphones — a distinction only a handful of smartwatches can claim — and the open system enables “a fanatical developer community” to “hack its innards.”

And this all happens in a package that’s less geeky-looking than you might expect. The new, round form factor of the Pebble Time Round not only adopts the traditional shape of a wristwatch — a benefit for style-conscious tech enthusiasts — but also sees Pebble beginning to offer different styles and sizes. That’s a welcome move for women and men with small wrists, who have struggled to find smartwatches that aren’t excessively bulky and heavy on their wrists.

Two of the five models accommodate a thinner band; 14mm wide instead of the 20mm used by the other three models. And even the wider band on the round version of the watch is slimmer than the 22mm bands of previous Pebble watches. Additionally, even lighter-weight versions of the Apple Watch are more than twice the weight of the new Pebble, which the company achieved by making the battery smaller. That does mean that instead of the Pebble Time’s week of battery life, the round version lasts for two days. To compensate, Pebble added a quick-charge capability that takes a watch from zero to 80% in 15 minutes.

None of this is to say that Pebble can take on the Apple Watch from the high end of the market. The company will begin shipping the Pebble Time Round on November 8, and the watch comes in silver, black, and rose gold. It will cost $250, which positions the Pebble as a low-priced and lightweight alternative to pricier smartwatches. Migicovsky says that coexisting with the Apple Watch would be just fine by Pebble. He tells Backchannel, “Pebble is not going to just run over Apple  — I think it would be foolish to say otherwise. But we are shooting some pretty good pebbles at the Goliath.”

In the process, Pebble is proving that there’s a market for lower-end smartwatches — ones that don’t require you to part with the painful amount of money that Apple charges for the Apple Watch. For many tech-savvy consumers, a Pebble watch is a more realistic purchase than an Apple Watch, and as more people warm up to the idea of a smartwatch, many will likely appreciate what the underdogs in the smartwatch market are trying to achieve.