How to Save Time by Googling Your Destination 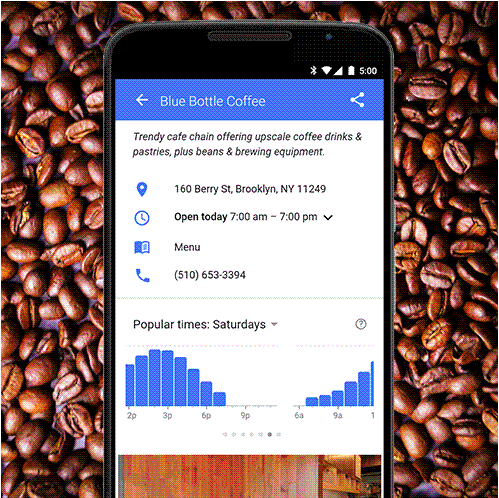 Google Search just added a brand-new feature that has the potential to save you a lot of time, especially if you find yourself trying to avoid lines and busy times at the gym, the grocery store, restaurants, and other favorite spots. As revealed by a post on Google Plus, Google Search now shows you the busiest times at millions of different businesses and places.

All you need to do to access the feature is search for a location, like a restaurant or a retailer, then click or tap on its title to see details like its address, phone number, and hours of operation. Also in that section, you’ll now be able to see the most popular times for that place on any day of the week. The feature doesn’t appear to be live for all users yet, and the company seems to be in the process of rolling it out now.

As Emil Protalinski reports for The Verge, the feature makes it possible to avoid lineups and overload simply by Googling a place before you head out. For some locations, that’s obvious — you should probably avoid the gum on Mondays and Tuesdays, for instance. But for errands that will take you to locations with less obvious traffic patterns, like getting lunch, grabbing coffee, or even going shopping, the feature can reveal some valuable information about when you should plan to go.

But as Protalinski notes, the feature could end up changing locations’ traffic patterns. “If too many people start showing up at the least busy times, well, those will become the busiest times. We presume Google is hoping that won’t happen, and that people will instead start going to places at times spread out during the week, which would benefit consumers and businesses alike.”

The Verge notes that the data on which the feature depends comes from location tracking in Google Maps on Android and iOS devices. Google pointed the publication to a blog post from August 2009, in which the company explained how it collects its traffic data. The same technology underpins the data on locations’ most popular times. The blog post explains, “When you choose to enable Google Maps with My Location, your phone sends anonymous bits of data back to Google describing how fast you’re moving. When we combine your speed with the speed of other phones on the road, across thousands of phones moving around a city at any given time, we can get a pretty good picture of live traffic conditions. We continuously combine this data and send it back to you for free in the Google Maps traffic layers.”

Just as Google calculates data on traffic patterns using the anonymized and aggregated movement of Google Maps users on the road, it’s also able to determine how busy a given place or business is. As Protalinski notes, Google doesn’t provide exact numbers in either case, and instead, simply shows you what times a road or a location is busiest relative to other times and other roads.

While Google Maps is installed on millions of devices around the world, the owners of all of those devices don’t necessarily use the app extensively, or enable location tracking. For that reason, Google’s method of determining a location’s popular times may not give you the most accurate picture. But if you’re using the feature to decide between two different days, or two different times of day, then it might help you to pick the less-crowded hour at the coffee shop or the quieter afternoon at the gym.

Sarah Perez reports for TechCrunch that while the feature isn’t integrated into Google’s virtual assistant, Google Now, it offers the kind of data that could, in the future, be used to better inform Google Now users of what to expect of a business they’re en route to after a Google search. A handful of apps enable users to see the wait times for specific types of businesses, but Google’s ability to aggregate data from millions of smartphones makes that functionality more broad and more accessible.