How to Use Google Maps’ New Offline Features 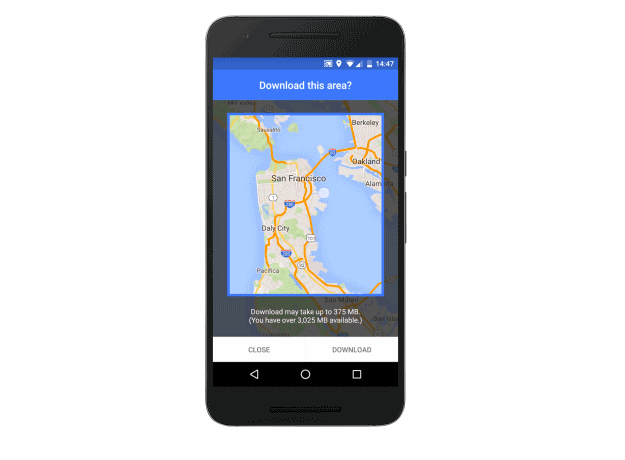 There have probably been at least a few occasions when you wished you could use Google Maps offline. Whether you’re at your subway station and need to make a change of plans underground or are exploring a new city and wishing you could get directions without racking up exorbitant data charges, you’d probably love to use the navigation software without having to depend on an Internet connection.

Luckily, Google has listened to its users and is adding a feature that enables you to download the maps for an area of the world to your smartphone. The next time you find yourself without connectivity, whether on a drive into the country or when you’re standing in an underground subway platform or parking garage, Google Maps will continue to work as if you were connected to the Internet.

The option to save maps for simple viewing offline has existed in the app since 2012. But with the latest update, you can now get turn-by-turn directions, search for specific destinations, and access useful information about different places on the map, all without needing to be within range of a cell tower or connected to a Wi-Fi hotspot.

To download an area, search for the city, county, or country you’re looking for and tap “Download” in the resulting place sheet. Or, navigate to “Offline Areas” in the Google Maps menu and tap the “+” to add an area. To prevent any expensive and unexpected data usage, map areas will only download for offline use when you’re connected to Wi-Fi.

Once you’ve downloaded the area, Google Maps will automatically switch to offline mode when it detects that you’re in an area with spotty connectivity or no service at all. When the app finds a connection, it will switch back to the online mode so that you can access the full version of Maps, which includes extras like live traffic conditions for your current route. When you request a route offline, the directions the app delivers will use average traffic time, rather than loading real-time traffic data. When the connection is restored, the route will be updated.

Stephanie Rosenbloom reports for The New York Times that using Google Maps in offline mode requires minimal planning, since once you’ve downloaded the relevant map area, you can take advantage of the feature whenever the need arises. While there are limits to the size of the map you can download, you can opt to download multiple maps to cover whatever area you anticipate needing the functionality to navigate.

The feature was first previewed at Google’s I/O developer conference in May, and the company is beginning to roll out the improvements with the latest version of Google Maps on Android. The functionality is expected to be added to the iOS app soon. And Google promises that over time, it will continue to add more offline features “to help you find your way — even when you can’t find a connection.”

Xavier Harding reports for Popular Science that the offline mode for Google Maps is likely to push other navigation app providers, like Apple and Microsoft, to add similar functionality to their software. The update cements Google’s lead over other popular navigation apps, like Apple Maps, and catches it up with lesser-known rivals like the open-source OpenStreetMap, which has offered offline support for years. Rosenbloom notes that other apps that offer detailed offline maps include Maps.me, City Maps 2Go, and Pocket Earth Pro, some of which enable you to search for streets and nearby points of interest.

Lisa Eadicicco reports for Time that many navigation apps are technically capable of retrieving directions without a data connection, since a smartphone’s GPS sensors don’t require a connection to track your location. Nokia’s HERE app has offered offline functionality for some time now, enabling users to download maps for offline use, find places, and get turn-by-turn directions without a connection. Apple Maps lacks an offline mode, though it does store information that you’ve already requested.

The offline feature added to Google Maps will be most helpful to users who routinely find themselves in need of navigation information when they don’t have a reliable data connection. But project manager Amanda Bishop tells The Verge that even users who don’t often notice that they’re offline should notice maps loading faster because of the “erratic” nature of even the fastest data connection. Google’s research indicates that the average smartphone is offline for 10% of the day, and much of that downtime is the result of simple network congestion. “The app just feels really fast,” Bishop notes. “It’s about never ever having to wait.”