How You’ll Be Able to Block Ads on Your iPhone 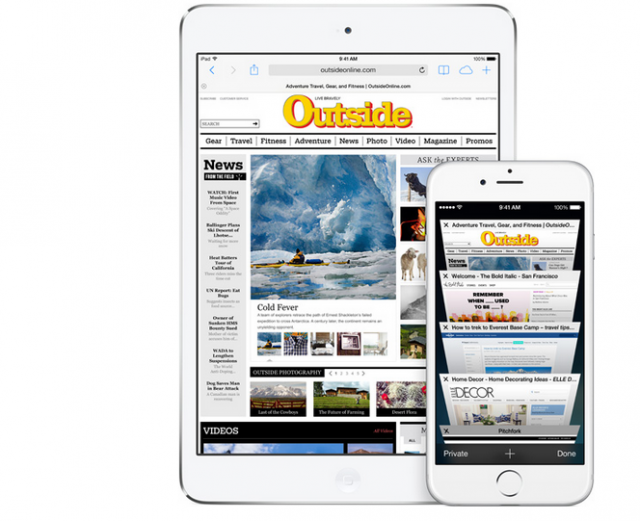 When iOS 9 launches this fall, it will bring more than improvements to existing features of the mobile operating system; for the first time, apps that enable users to block ads from the websites they visit on their iPhones or iPads will be allowed in the App Store.

Tom Simonite reports for MIT’s Technology Review that new ad-blocking apps coming to the iOS App Store this fall promise to make web browsing faster and safer, enable your smartphone’s battery to last longer, and make your data bills smaller. By blocking ads from displaying on the web pages your browser loads, Simonite notes, they also promise to escalate the growing controversy over the effects that ad blockers have on publishers large and small.

The ability to block advertisements is an obvious draw for consumers, who benefit from ad blockers’ removal of auto-playing video ads and ability to prevent ad companies from tracking them. That results in improvements on both the privacy and performance fronts, which are especially important to users in the U.S., where the dollars spent on data usage are not the primary focus for most mobile users.

But ad blockers cause content providers’ websites to miss out on advertising revenue, and as the use of ad blockers becomes more prevalent on computers, some publishers have implemented technology that “smuggles” ads past ad blockers. The appearance of ad blockers in Apple’s App Store could make them quite popular — though there’s no precedent for their usage on mobile devices because Apple’s software hasn’t supported them, and Google has outright banned them from the Android app store.

As The Cheat Sheet reported in June after Apple’s Worldwide Developers Conference, the company’s developer documentation for Safari 9.0 revealed that the new version of the browser will enable developers to add “Content Blocking Safari Extensions,” which can “block cookies, images, resources, pop-ups, and other content.” The OS X version of Safari already allows a variety of custom extensions, and one of the most popular of those is AdBlock. When iOS 9 launches in the fall, you’ll be able to go to the App Store and download an extension that blocks ads on most sites.

The argument for using an ad blocker will be even stronger on mobile than on desktop, as mobile is where bandwidth, performance, and battery life are at a premium. By opening the way for ad-blocking on the iPhone, Apple is both giving users more control over their iOS experience and undercutting Google, which makes more than 90% of its revenue from online advertising — a decent percentage of which is served to iPhones.

But publishers should be worried — especially because iOS 9’s content-blocking Safari extensions will also enable users to block cookies on a site-by-site basis. That would enable users to bypass content providers’ paywalls. Potentially, extensions could also block all content pulled from third-party servers — including that from analytics tools, ad servers and exchanges, social buttons and trackers, and other online surveillance tools.

Simonite notes that Apple hasn’t said that it intends to unleash ad blocking apps itself, and the company didn’t respond to a request for comment. But when the developer documentation was quietly released this summer, developers quickly noted the enabling of content-blocking extensions is “perfect” for the purpose of introducing ad blockers on iOS. Some developers are currently testing ad-blocking apps that they intend to release when iOS 9 launches.

Dean Murphy, a developer based in the United Kingdom, put together an ad blocker in about an hour and found that it cut the time it takes to load the popular blog iMore from 11 seconds to 2 seconds; he’s now working on a polished version called Crystal, and expects that there will be many more like it when the new operating system is released. One app that will compete with Crystal is Purify, created by uBlock’s Chris Aljoudi, who says that the app cuts web browsing data usage by about a quarter.

Technology Review notes that a survey of Internet users by PageFair found last year that more than a quarter of respondents said they used ad-blocking tools. The respondents were most likely referring to desktop usage, though PageFair says that mobile ad-blocking apps are already very popular in regions where many phones based on Google’s Android operating system use app stores that Google doesn’t control, like China, India, and Russia. UC Browser and Maxthon, mobile browsers with built-in ad blockers, together have more than 600 million active users.

The long-term outcome of both ad blockers and ad-block defeating technology could be to convince advertisers to abandon the most annoying, intrusive ads — the ones that slow pages loading time to a crawl and sometimes cause users to abandon a page before viewing the content they wanted to see. Various companies are working on products that let advertisers place ads that are guaranteed not be blocked, or products that enable users to choose how publishers make money from them.