iPad Pro: The Cool Device That No One Wants 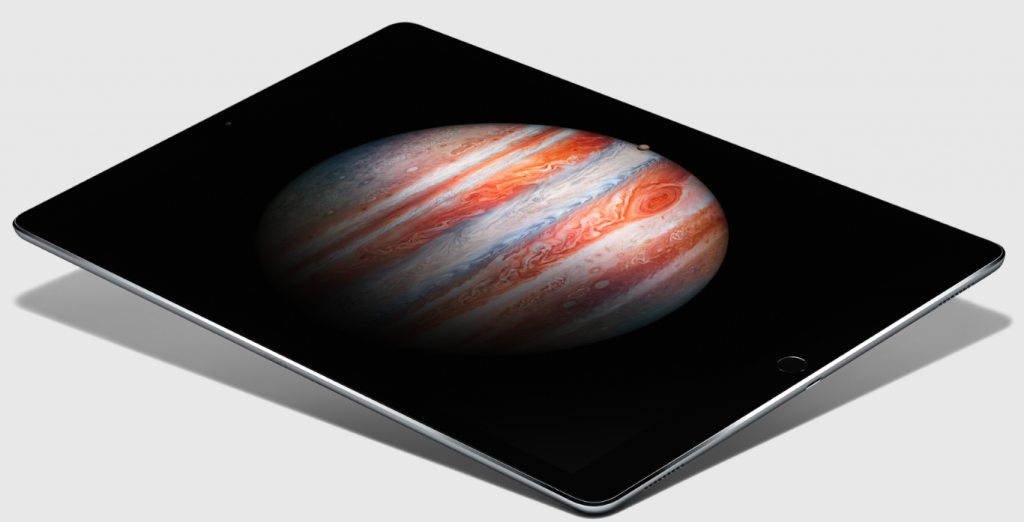 Even though iPad sales have been flagging recently — just check out these stats from Fortune — Apple has big plans for the device. The company maintains that the iPad is the future of computing, and that in some indeterminate number of years, almost no one will need a full desktop or laptop computer. One iPad will rule them all.

The new iPad Pro is supposed to represent the beginning of that turning point. This is an iPad designed first and foremost for work.

Essentially, it’s an enormous iPad, with hyper-fast technological guts built into it. The screen is 12.9 inches — roughly the size of a cereal box — which makes it 78% larger than the next-biggest iPad. The iPad Pro starts at $800 and goes up to $1,050 if you want the beefiest model.

To cement the device as a laptop replacement, Apple has cooked some productivity-centered features into iOS 9, like a full split-screen view that lets you run two apps side-by-side. Apple has also released a pair of pricey accessories for the iPad Pro: the Smart Keyboard case ($170) and a stylus called the Pencil ($100).

So is the iPad Pro any good as a work device? At least one reviewer thinks so; Federico Viticci of MacStories. He’s a prominent Apple writer who’s been using an iPad as his sole work device for years now. Unsurprisingly, Viticci absolutely loves the iPad Pro:

The way I work from my iPad has been dramatically improved by iOS 9 multitasking, and the iPad Pro’s bigger screen takes it up another notch. Using two full-size iPad apps at the same time is a dream come true from a productivity perspective. The practical gains of bigger apps in Split View result in fewer taps to switch between views, consistency with regular layouts, and an overall more powerful multitasking environment. After trying Split View on the iPad Pro, I can’t go back to the iPad Air 2.

Viticci might be sold on the iPad as the future of computing, but he seems to be alone on that point. Most other reviewers had many positive things to say about the device, but concluded by categorically rejecting the notion that it could replace a PC for their personal needs. Humorously, most reviewers thought there must be some other group of people out there who could use an iPad Pro exclusively for serious work.

Apple pundit John Gruber is one of them. From his review: “Is it a MacBook replacement for me, personally? No. For you? Maybe. For many people? Yes.” Walt Mossberg, writing for The Verge, felt similarly, if more dubious: “The iPad Pro will no doubt make a lot of Apple users happy, especially if they use it for graphics. But I won’t be buying one, and I don’t recommend that average users do so either.”

BuzzFeed’s Nicole Nguyen found many things to love about the iPad Pro, but won’t become an adopter anytime soon:

I write words for a living and so, I love keyboards. Unfortunately, long-term keyboard-iPad use makes me want to dunk my hand in an ice bucket. But as a digital notebook, the iPad Pro is amazing. I just don’t need that right now. But you might.

But I’m having a uniquely hard time putting myself in the shoes of a potential iPad Pro buyer, particularly those who [Apple CEO] Tim Cook believes will replace a laptop with a big tablet. Some of that is because the iPad Pro isn’t really for me, even as someone who already works on an iPad Air 2 with some regularity.

The big problem with every reviewer quoted so far is that they’re all tech writers who generally come at the device with similar needs and perspectives. To get a more well-rounded take on the device, Wired let its creative team try it out. These are the kinds of professionals the iPad Pro seems to have been designed for. And perhaps unexpectedly, they had the exact same reaction as the writers.

UX Designer Mathew Ghavidel-Asgari loved how responsive the iPad Pro is when drawing on it with the Pencil, but said, “I wouldn’t necessarily say I’d take it to the professional level as an artist, because that’s really a tactile thing.”

Photo Editor Christie Hemm Klok said she would use it for personal photo editing, but not for her professional needs. Associate Video Producer Junho Kim found the video editing software he tested user friendly, but said, “I wouldn’t use the iPad Pro professionally just because it doesn’t have a lot of the tools I use on a day-to-day basis.”

So who’s the iPad for? Almost everyone seems to think it’s a wonderful device, but not for them — wonderful for someone else. The problem is, that someone else never seems to materialize.

With enough incremental upgrades and powerful new apps, it might morph into a PC replacement eventually. But that day is not today. For now, the iPad Pro isn’t particularly mobile. It doesn’t excel as a professional-level writing tool, video editor, image manipulator, or anything else most people do on computers for work. The iPad Pro just might be the best device no one wants to use.