iPhone SE and New iPad Pro: Everything You Need to Know

Apple’s March 21 event was expected to bring small versions of two major Apple products: the iPhone and the iPad Pro. Apple fans who favor small iPhones as well as iPad Pro fans who want a more-portable device alike were looking forward to the event. And fortunately for both groups of Apple fans, plus those who were simply looking forward to hearing about new devices and software, the next big thing for Apple is two smaller devices. Both the 4-inch iPhone SE and a new 9.7-inch iPad Pro made an appearance at the event. Here are all the must-have details about the new devices and the software that powers them. 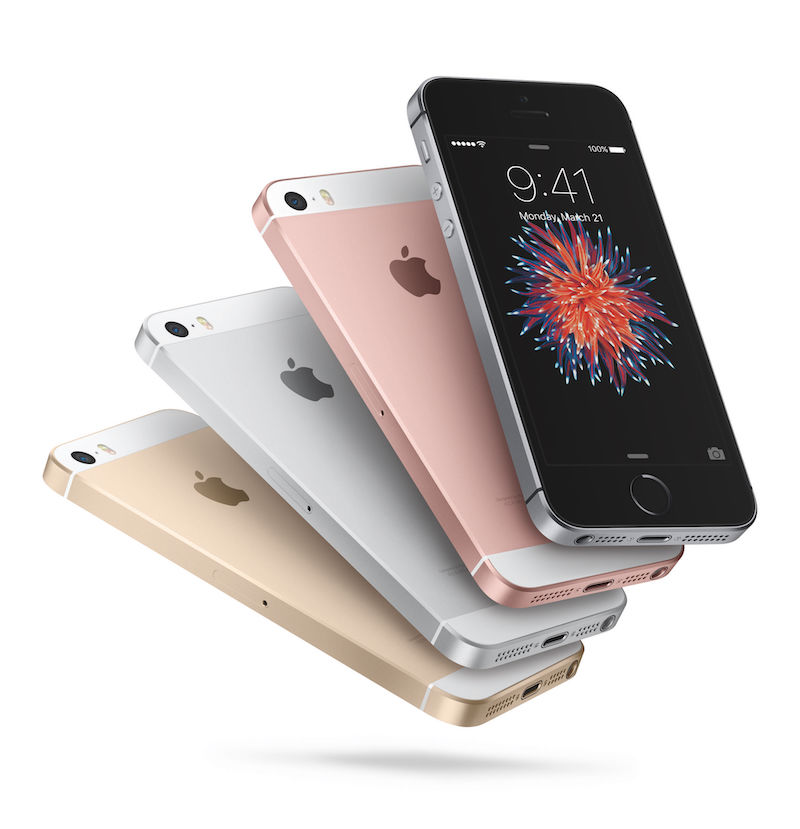 Greg Joswiak, Apple’s vice president of iPod, iPhone, and iOS product marketing, introduced the iPhone SE. Apple’s newest iPhone isn’t entirely novel, and returns to a form factor that we haven’t seen since before the launch of the iPhone 6. The iPhone SE offers the style of the larger iPhone 6s — with an aluminum body, matte chamfered edges, and an inset stainless steel Apple logo — with the form factor and round volume buttons of the iPhone 5s.

Though the iPhone SE is a smaller, cheaper iPhone, Apple made clear that the device is its most powerful 4-inch iPhone yet, with the same 64-bit A9 chip used in the iPhone 6s and iPhone 6s Plus and the M9 motion coprocessor that enables both fitness-tracking capabilities and the always-on “Hey Siri” feature. The iPhone SE compares favorably to the smaller iPhone 5s that many Apple fans continue to use. The A9 processor used in the iPhone SE offers two times faster CPU performance and three times faster GPU performance compared to the iPhone 5s, plus gains in energy efficiency that bring “incredible battery improvements.” 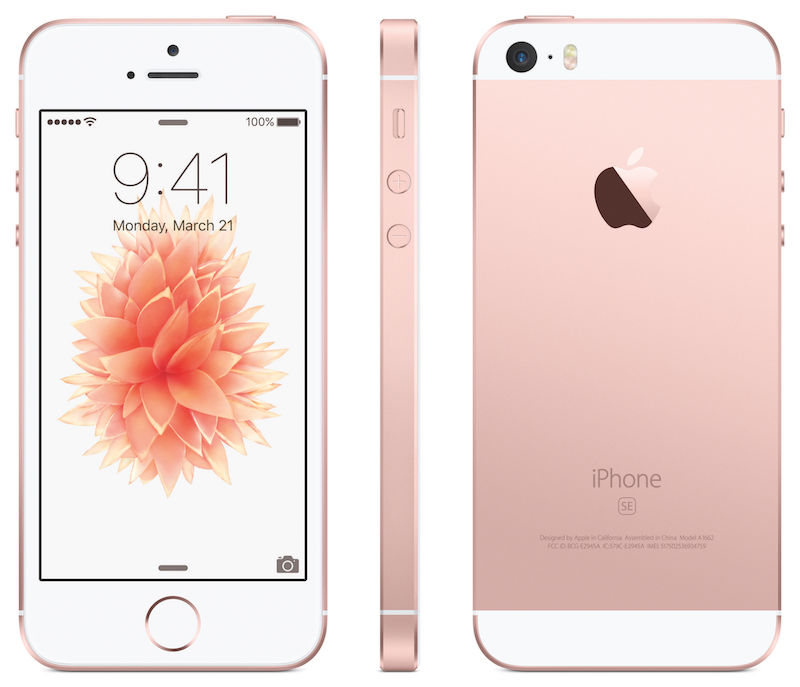 The iPhone SE supports LTE up to 150Mbps, which makes it up to 50% faster than the iPhone 5s, and supports more LTE bands. The phone also features 802.11ac Wi-Fi, supports high-quality Wi-Fi calling,  is equipped with the TouchID fingerprint sensor, and integrates an NFC radio and the Secure Element for Apple Pay.

The iPhone SE is also equipped with Apple’s “most advanced camera system” — the same one found in the iPhone 6S — a 12MP iSight camera with Focus Pixels for fast focusing, True Tone flash, a new image signal processor, the ability to capture Live Photos (though no 3D Touch display), and the ability to capture panoramas up to 63MP or record 4K video. The iPhone SE also features a front-facing FaceTime HD camera with Retina Flash (a feature that enables the entire touchscreen to briefly light up and act as a flash for capturing selfies in low light).

The iPhone SE starts at $399 for a model with 16GB of storage — which Joswiak noted is the most affordable price at which Apple has ever introduced an iPhone — or $499 for a 64GB version. The iPhone SE will be available in space gray, silver, gold and rose gold metallic finishes. The 16GB iPhone SE will be offered for free with a two-year contract, and the new iPhone will cost as little as $17 per month on a plan offered at Apple’s retail stores. As part of the newly-announced Trade Up With Installments program, also offered at U.S. Apple stores, customers will be able to purchase the iPhone SE for as little as $10 per month for 24 months. Apple will begin taking orders for the new iPhone on March 24, and the iPhone SE will begin shipping on March 31.

The iPhone isn’t the only product that got smaller at Apple’s March 21 event. Phil Schiller, Apple’s senior vice president of worldwide marketing, introduced the second member of the iPad Pro family: the 9.7-inch iPad Pro, which is 6.1mm thin and weighs just under a pound. That’s a much more portable size than the original iPad Pro. Schiller positioned the new, smaller iPad Pro as the “ultimate PC replacement,” noting that there are over 600 million PCs currently in use that are more than five years old. “This is really sad,” Schiller said, opining that the people using these PCs “could really benefit from an iPad Pro.”

The new, smaller iPad Pro features the same display as the bigger version, which makes its screen 40% less reflective  and 25% brighter than that of the iPad Air 2. It also features a wider color gamut, with 25% greater color saturation than the screen of the iPad Air 2.One of the neatest features of the new iPad Pro is a new “True Tone display,” which measures the color temperature of the ambient light and adjust the display to match, in order to approximate the way that a piece of paper reflects the temperature of light.

The device is equipped with the A9X chip, 4GB of RAM, and M9 motion coprocessor, found in the larger iPad Pro. It also features a “pro audio system” comprised of four speakers. It supports 802.11ac Wi-Fi, and supports both LTE Advanced and the most LTE bands supported by any tablet. The 9.7-inch iPad Pro also integrates the Apple SIM, which enables you to choose a data plan directly from your device. Its 12MP camera records 4K video, captures Live Photos, and is equipped with Focus pixels and True Tone flash.

The device is equipped with a Smart Connector to support a new Smart Keyboard tailored to the 9.7-inch display, plus the Apple Pencil. Schiller noted that the iPad features built-in “palm rejection software,” which can recognize your palm, fingers, or forearm and enable you to put your hand on the screen as you draw, in the same way you would if you were using a piece of paper. The new iPad Pro also supports new Lightning accessories, including a USB camera adapter and a Lightning SD card reader.

The new iPad Pro will be available in silver, gold, space grey, and rose gold. It will cost $599 for a model with 32GB of storage, $749 for a 128GB model, and $899 for a new 256GB model. Apple will begin accepting preorders on March 24, and the new iPad will begin shipping on March 31. The device will need to convince people that the iPad will work as a productivity device, and get existing iPad users to upgrade to a new device. We’ll have to see how successful the iPad Pro is in the coming months.

Both the iPhone SE and the 9.7-inch iPad Pro will benefit from the latest version of iOS 9.3. Current iPhone and iPad users have been looking forward to the update, mostly because it enables a feature called Night Shift, which uses the clock and geolocation of your iOS device to determine when the sun sets in your location, and to automatically shift the color of the light emitted by the display toward the warmer end of the spectrum. The goal is to keep your iPhone or iPad from exposing you to blue light in the evening, since research has shown that blue light suppresses the production of melatonin — the hormone that promotes sleep — which reduces the amount and delays the timing of REM sleep.

iOS 9.3 will also add updates to important iOS apps. The Notes app will gain the ability password-protect your notes, either with a passcode or with your fingerprint. The Health app will gain suggestions for apps that you can use to add data to your dashboard, and the News app will get faster and more personalized. iOS 9.3 will be available to download beginning on March 21.