Is Melania Trump Modeling Her Style After Meghan Markle?

Ever since she joined the royal family, Meghan Markle now officially qualifies as a trendsetter. One of her apparent followers just so happens to be another woman in power: Melania Trump. Her outfits have seemingly been modeled after Markle’s, leading us to wonder: Is the first lady copying the royal’s style? Here are their most similar looks, ahead.

On Thursday, July 11, 2018, Trump stepped out in Great Britain for an official tour of the country. She wore this form-fitting cocktail dress, designed by Roland Mouret. According to Vanity Fair, it’s available at Saks Fifth Avenue for $1,365.

We can’t help but notice the similar neckline, cut, and color of the dress to one Markle wore just days before. Oh, and it’s by the exact same designer. Markle wore her look while on a tour of Ireland, so they’re both resorting to the style for international travel. 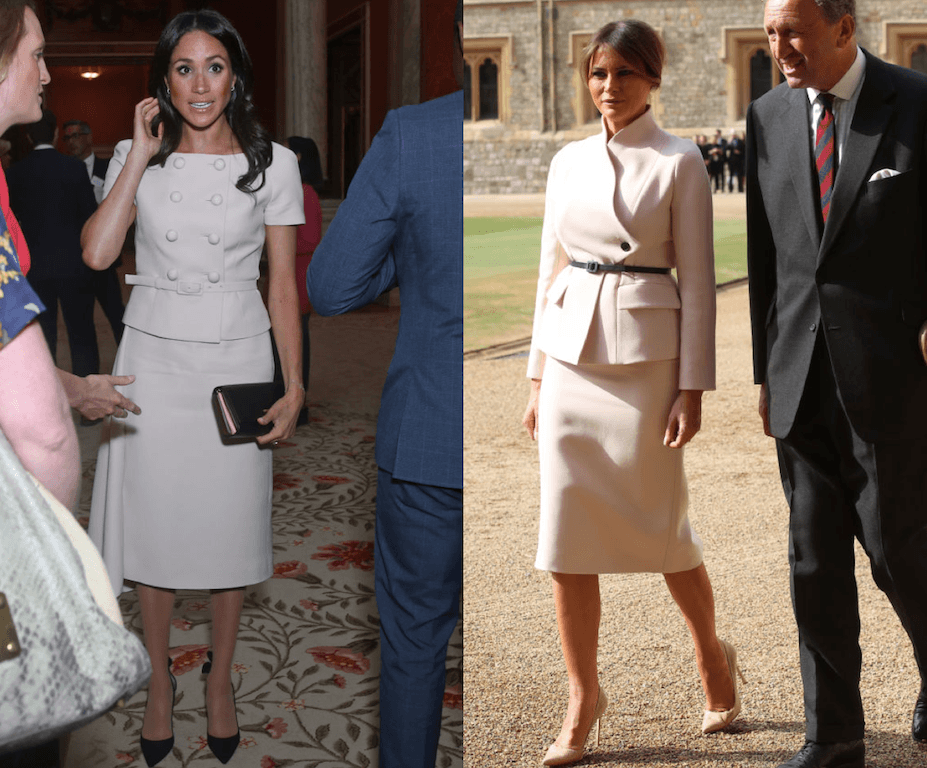 Markle and Trump wearing similar styles from the same designer wasn’t the first time the two were caught twinning. On June 26, 2018, Markle attended the Queen’s Young Leaders award ceremony at Buckingham Palace. She wore her signature color — blush pink — looking as gorgeous as ever. Her belted dress was designed by Prada, and she paired it with a small bag by the same brand. She also finished off the look pointed-toe black pumps by Aquazzura.

The next month, Trump wore a suspiciously similar ensemble while visiting Windsor Castle for tea with Queen Elizabeth. If Trump was truly modeling this look after Markle, it would make sense that she’d follow in the footsteps of a royal while in their territory.

Trump’s two-piece suit was by Christian Dior, including a pencil skirt and asymmetrical jacket. From the belted style to the light hue to the pointed-toe pumps, we wouldn’t be surprised if she took a few pointers from Markle herself.

This time around, Trump beat Markle to the trench coat dress trend. On July 10, 2018, Trump arrived in Brussels, Belgium, to attend the NATO Summit. Stepping off of Air Force One, she wore a dramatic trench coat designed by Burberry (which retails for $1,995).

Seven days later, Markle stepped out in this now-iconic sleeveless trench coat dress. It’s designed by Canadian brand House of Nonie, and can be purchased for $825. She’s once again rocking her signature pink shade, which isn’t too far from Trump’s beige hue. Both women’s looks also feature a cinched waist, giving flattering shape to their styles.

According to Town & Country Magazine, Markle’s “best friend and unofficial stylist” helped her pick this look. Luckily, retailers have picked up on the trench coat dress trend, so we dress like Markle, too. Macy’s carries a Free People sleeveless trench dress for $98, while Saks Off Fifth is nearly sold out of this similar $64 Calvin Klein style.

Whether or not Trump has been modeling her style after Markle, we certainly wouldn’t blame her for wanting to dress like the stylish royal.