Whether she’s promoting a new album or making a political statement, Lady Gaga knows how to use fashion to make a lasting — read: sometimes frightening — impression. In fact, she even has a special team of designers (known as Haus of Gaga) that help her bring some of her wildest interpretations to life.

From her most shocking Grammy Awards entrance (page 5) to her most controversial red carpet look ever (page 7), we share some of the most terrifying (but, awesome) things Lady Gaga has ever worn on the red carpet, ahead. 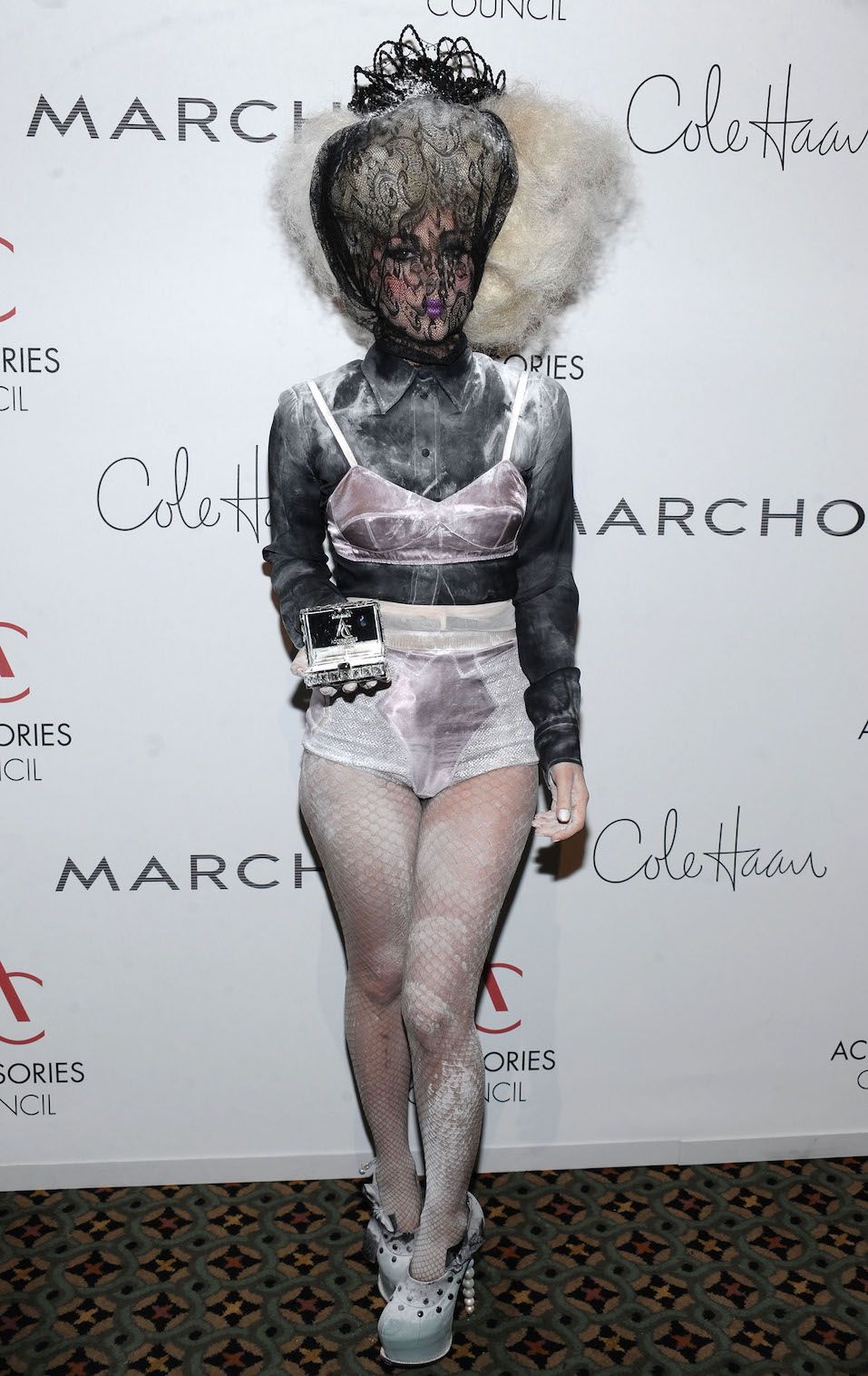 It’s hard to say what the weirdest part of this is. | Dimitrios Kambouris/Getty Images for The Accessories Council

In 2009, Lady Gaga graced the 13th Annual ACE Awards red carpet in Victorian-inspired ensemble with a lace veil that covered her whole face and parts of her large blonde wig.

To add to this strange ensemble, the singer doused herself in baby powder, covering her shirt, legs, and the insides of her hands.

Next: Was this look inspired by Marie Antoinette’s birthday cake? 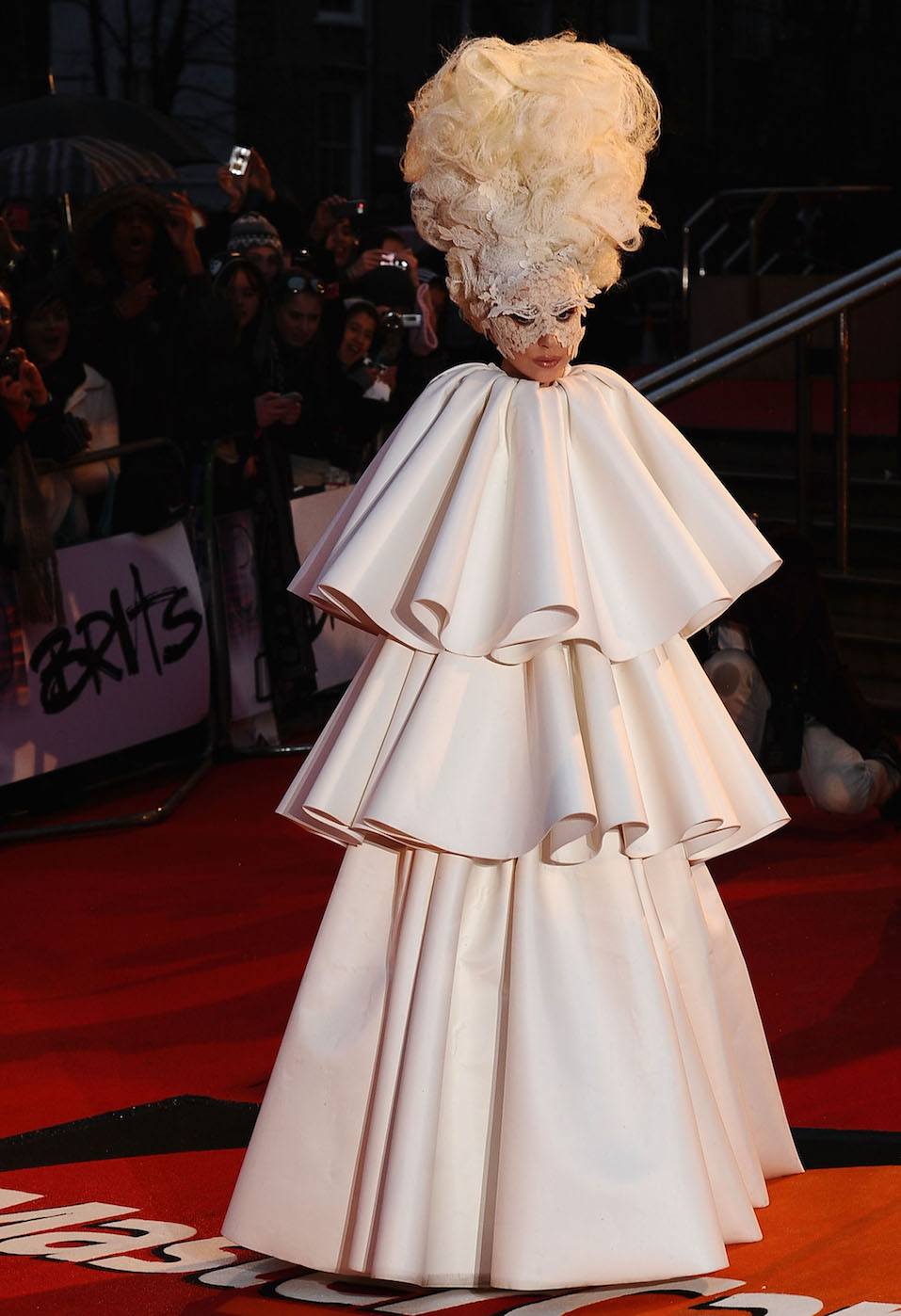 Going to the bathroom must have been a struggle. | Ian Gavan/Getty Images

Lady Gaga has channeled the Victorian era on a handful of occasions. But, perhaps one of her most memorable (and terrifying) ensemble was the three-tiered ruffle dress she wore to the 2010 Brit Awards.

From her wig to her eye mask to the fact that she doesn’t have any arms, this is one for the books.

Next: This red carpet look was pretty normal … until she smiled. 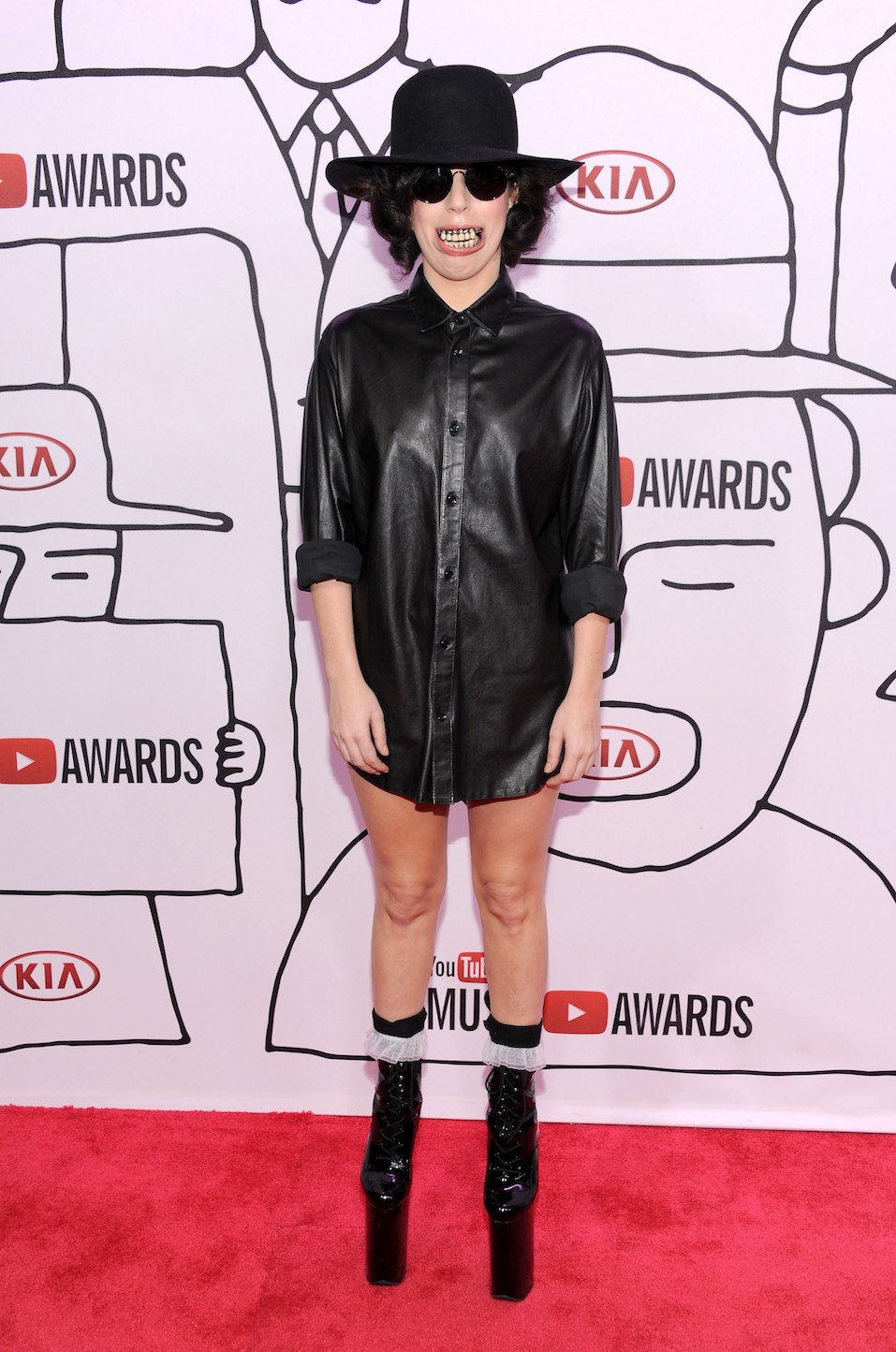 At first glance, this red carpet ensemble looked pretty safe by Gaga standards. But, then she smiled and revealed a set of terrifying fake teeth.

Next: We can’t believe this wasn’t a Halloween costume (or, a skin disease). 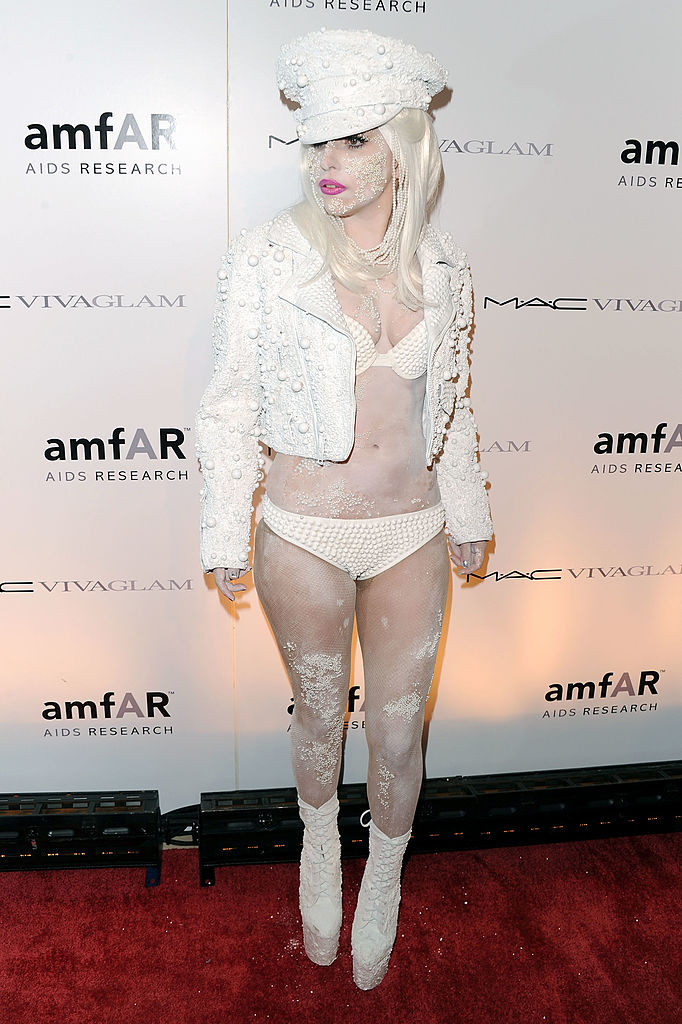 In 2010, Lady Gaga stepped out onto the amfAR New York Gala in what appeared to be a biker-inspired costume. Only, this biker got into a fight with a pearled monster and came out looking like the Rainbow Fish.

Next: Her most bizarre Grammy Awards entrance. 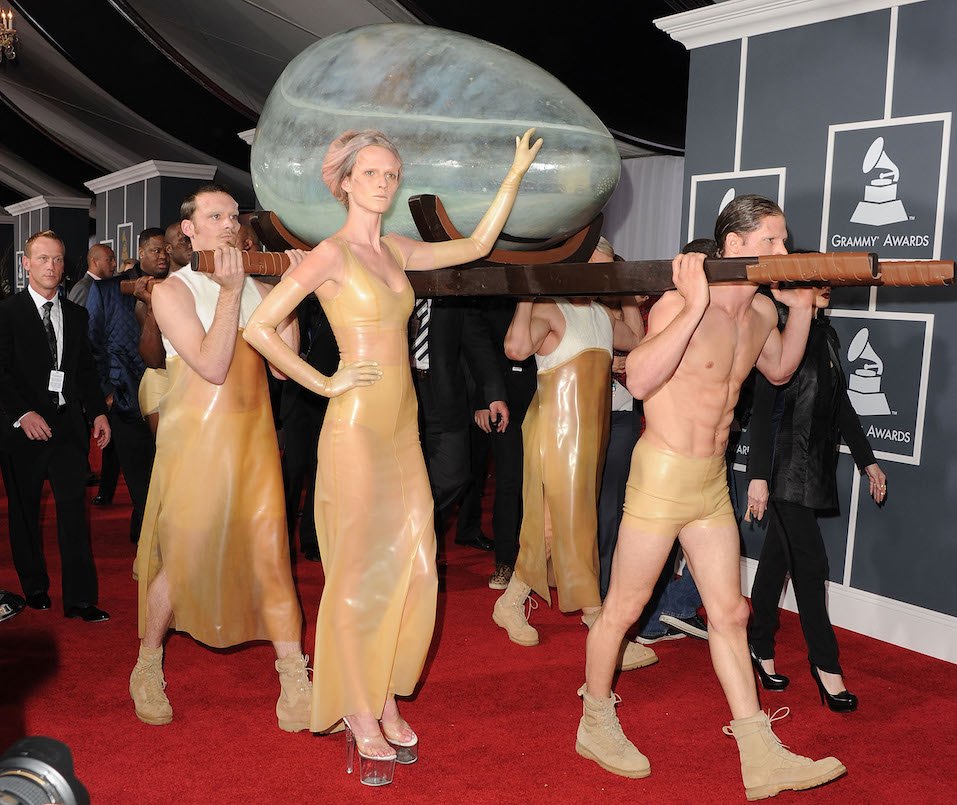 he was reportedly in there for three days. | Jason Merritt/Getty Images

Lady Gaga has worn a number of terrifying looks and this one is no egg-ception. In 2011, the pop star arrived at the 53rd Annual Grammy Awards in an egg — which she later confirmed was actually “vessel” — carried by latex laden models. Gaga later revealed herself after “hatching” during her performance of Born This Way.

The most terrifying part: Gaga was reportedly in the temperature-controlled egg for three days before her performance. We don’t even want to know what that was like.

Next: This look left us feeling very … confused. 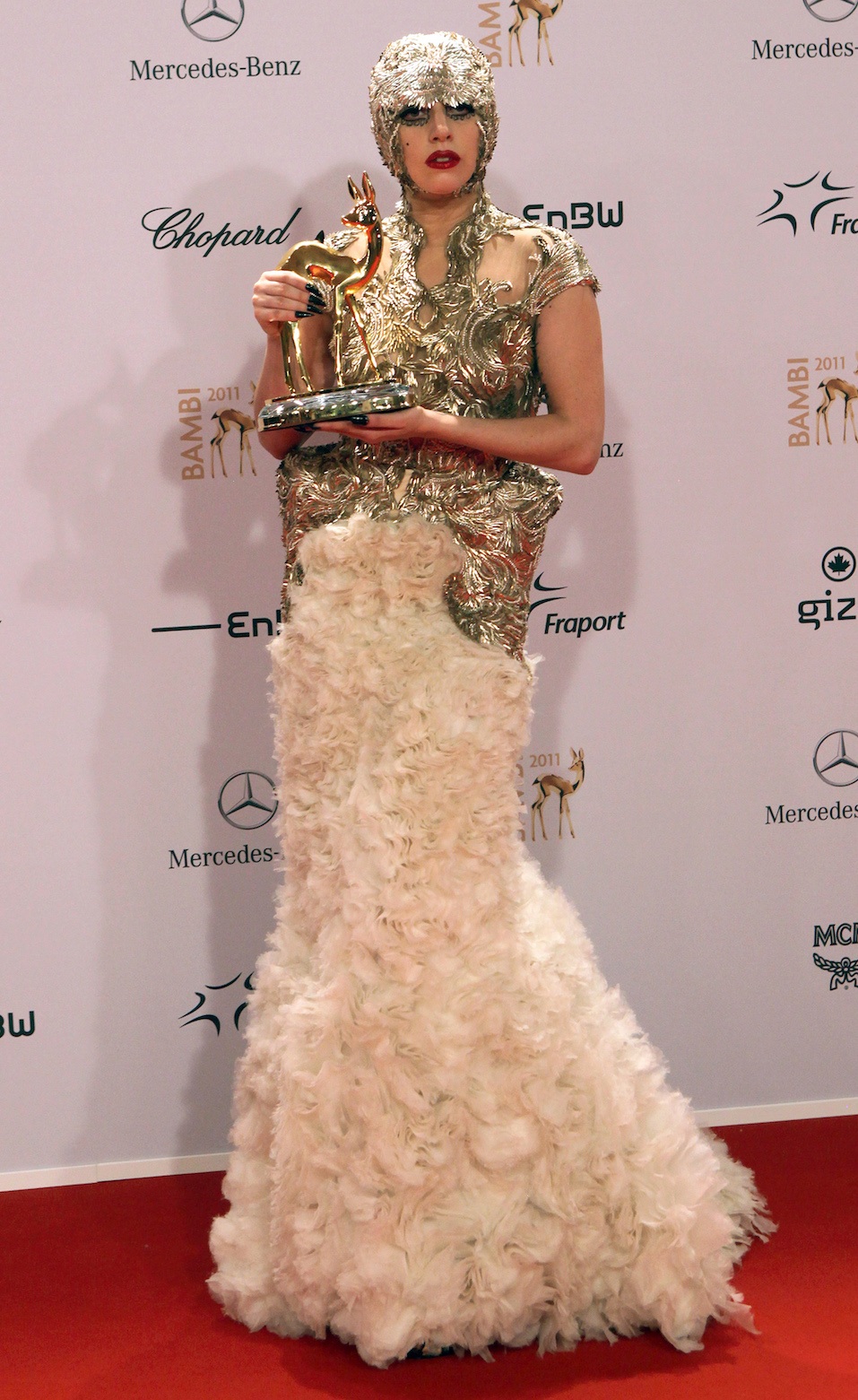 It was an odd mix. | Daniel Roland/AFP/Getty Images

In true Lady Gaga fashion, the singer showed up to the 2011 Bambi Awards in a mix of clashing designs. The Alexander McQueen gown featured a gold helmet-like headpiece that extended down the bodice and into a ruffled cream skirt. Only Gaga could pull something like this off.

Next: This controversial outfit was taken the wrong way. 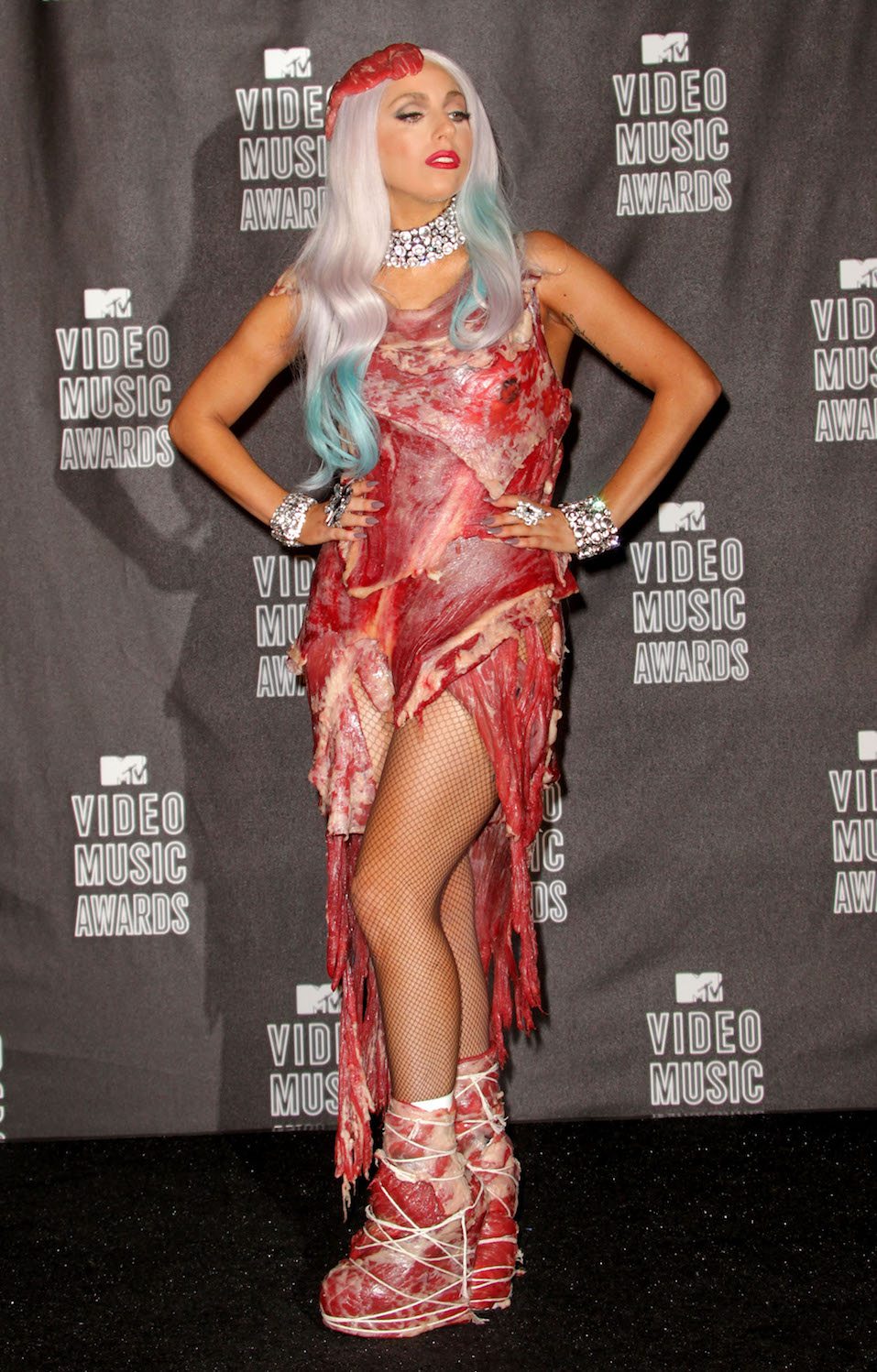 It had a surprising political statement. | Frederick M. Brown/Getty Images

Who could forget Lady Gaga’s infamous meat dress? As bizarre as it was, the controversial outfit was actually worn in protest against the military’s “don’t ask, don’t tell” policy.

In an interview with on Ellen, the singer-songwriter explained why she wore it, stating: “It has many interpretations, but for me this evening it’s [saying], if we don’t stand up for what we believe in, if we don’t fight for our rights, pretty soon we’re going to have as much rights as the meat on our bones.’ ”

Next: We don’t know what’s crazier, her hair or her shoes.

8. The woman of the year 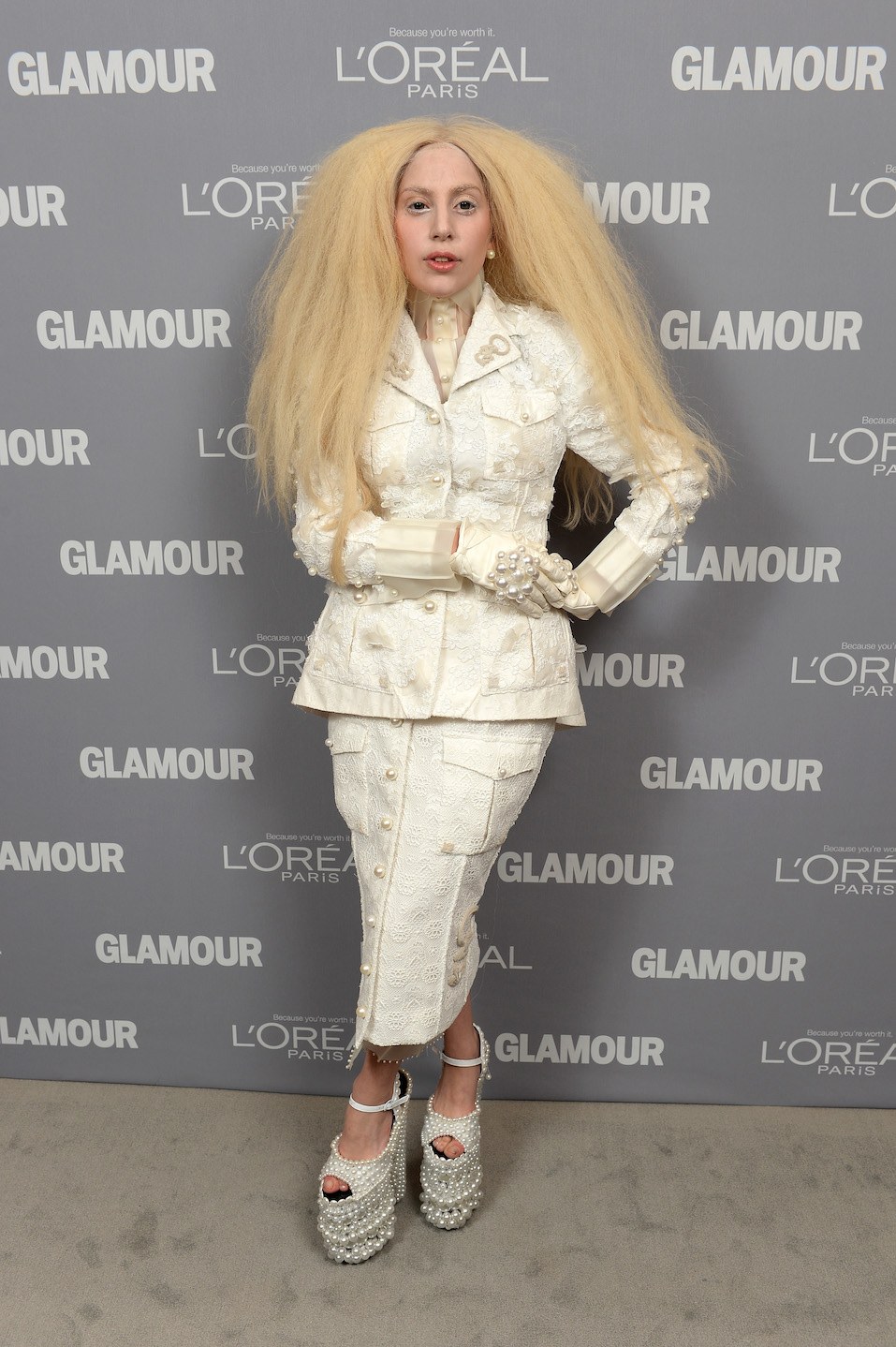 It was relatively toned down in comparison. | Dimitrios Kambouris/Getty Images for Glamour

In 2013, Lady Gaga attended Glamours 23rd annual Women of the Year awards in sky-high pearl platforms and a matching skirt suit. That said, the thought of her falling down in her enormous heels isn’t the only terrifying thing about this look — her wig and makeup resemble something out of American Horror Story.

Next: Proof that Lady Gaga actually plays it safe on the red carpet. 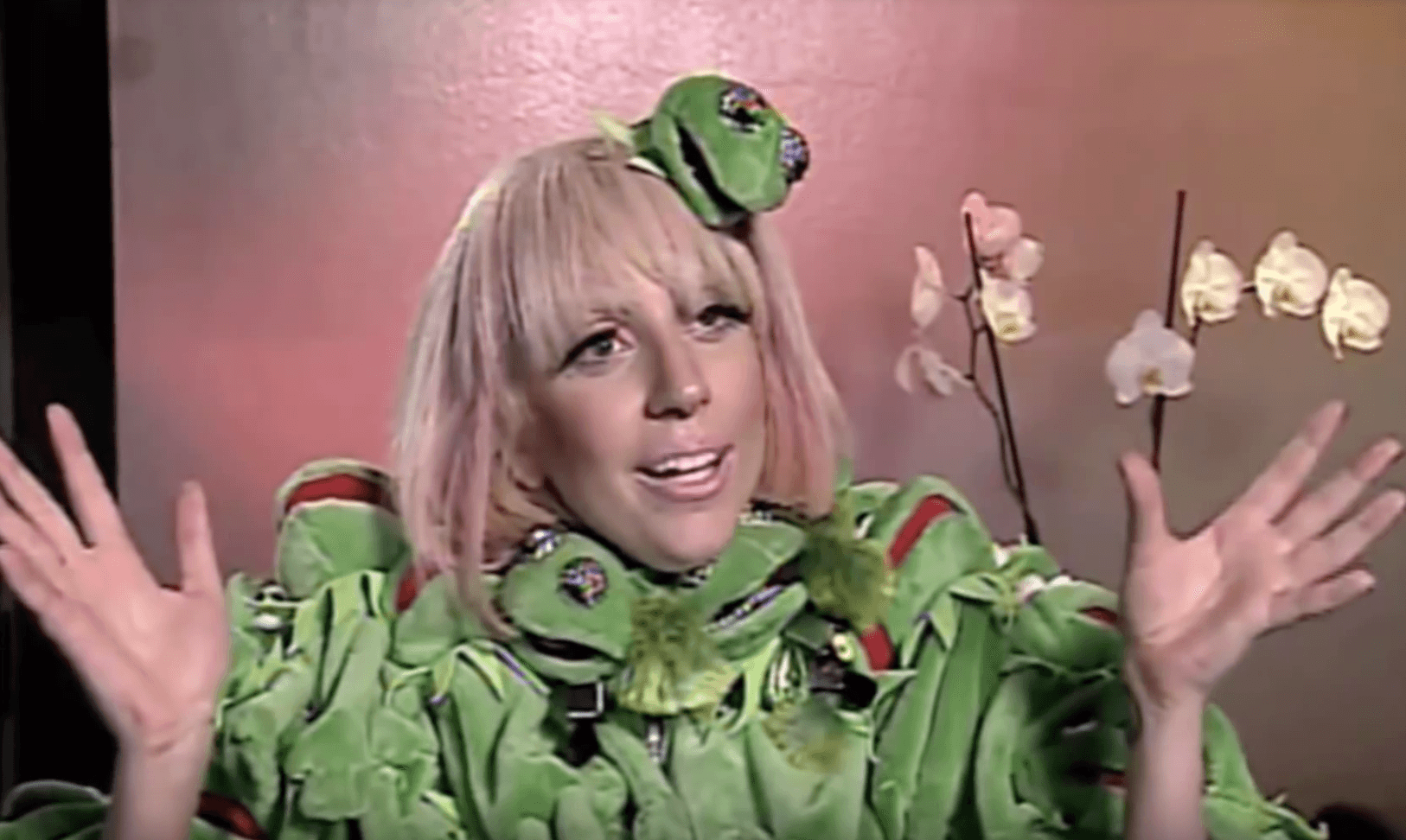 Red carpets aren’t the only place Gaga likes to show off her, shall we say, personal style. In fact, these next few outfits prove she actually plays it safe when posing for the cameras.

Case in point: The Kermit the Frog jacket she wore for an interview on a German TV show. Designed by Jean Charles de Castelbajac, the green statement piece featured dozens of Kermit heads and a whole lot of scary. 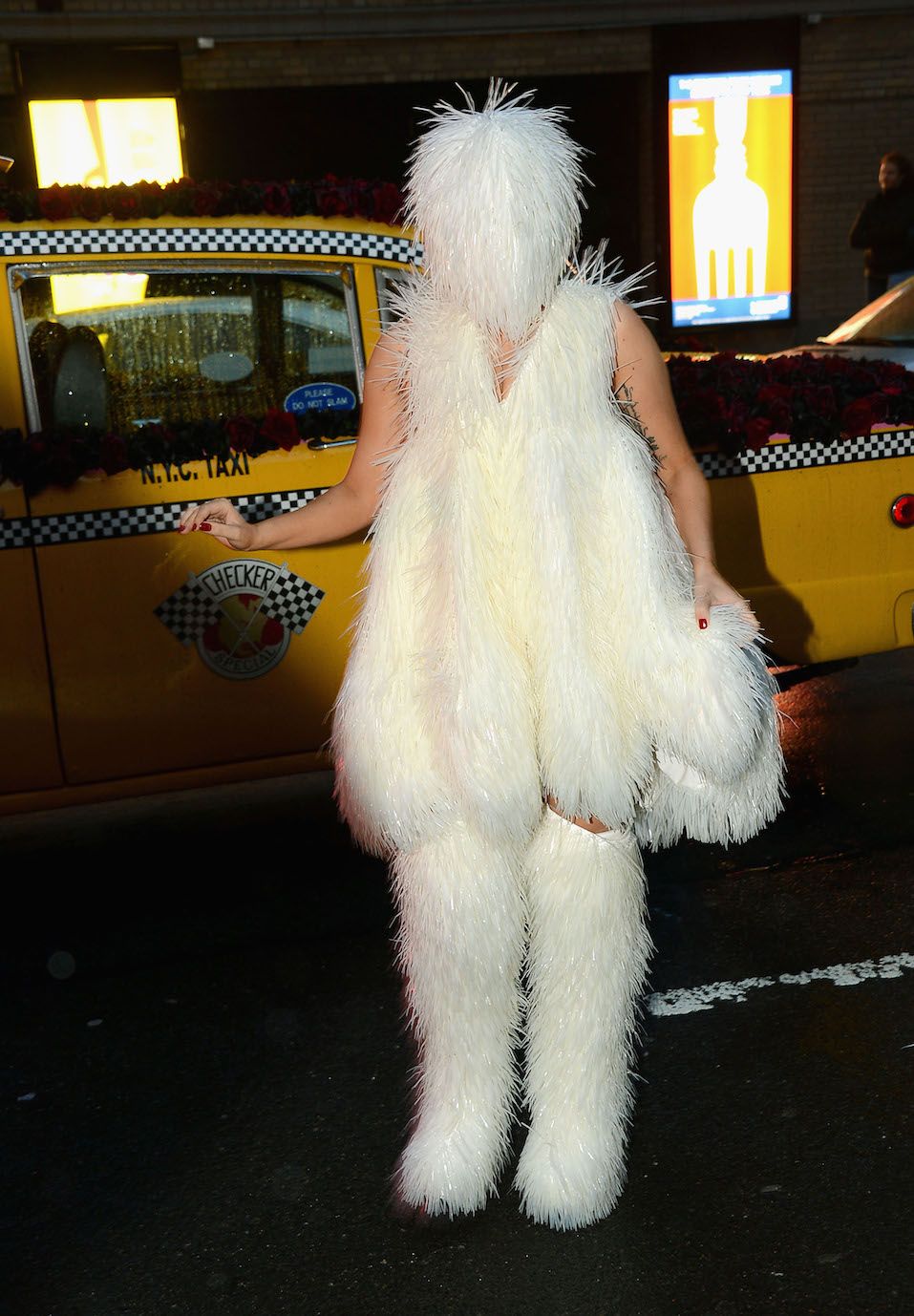 She can pay people to see for her. | Theo Wargo/Getty Images

Looks like Lady Gaga figured out a solution for that weird period between winter and spring. In 2014, the singer arrived at the Roseland Ballroom in NYC wearing a head-to-toe (or, shall we say: face-to-toe) sleeveless fur ensemble and we have so many questions.

Next: How did she fit through the door in this blow up ensemble? 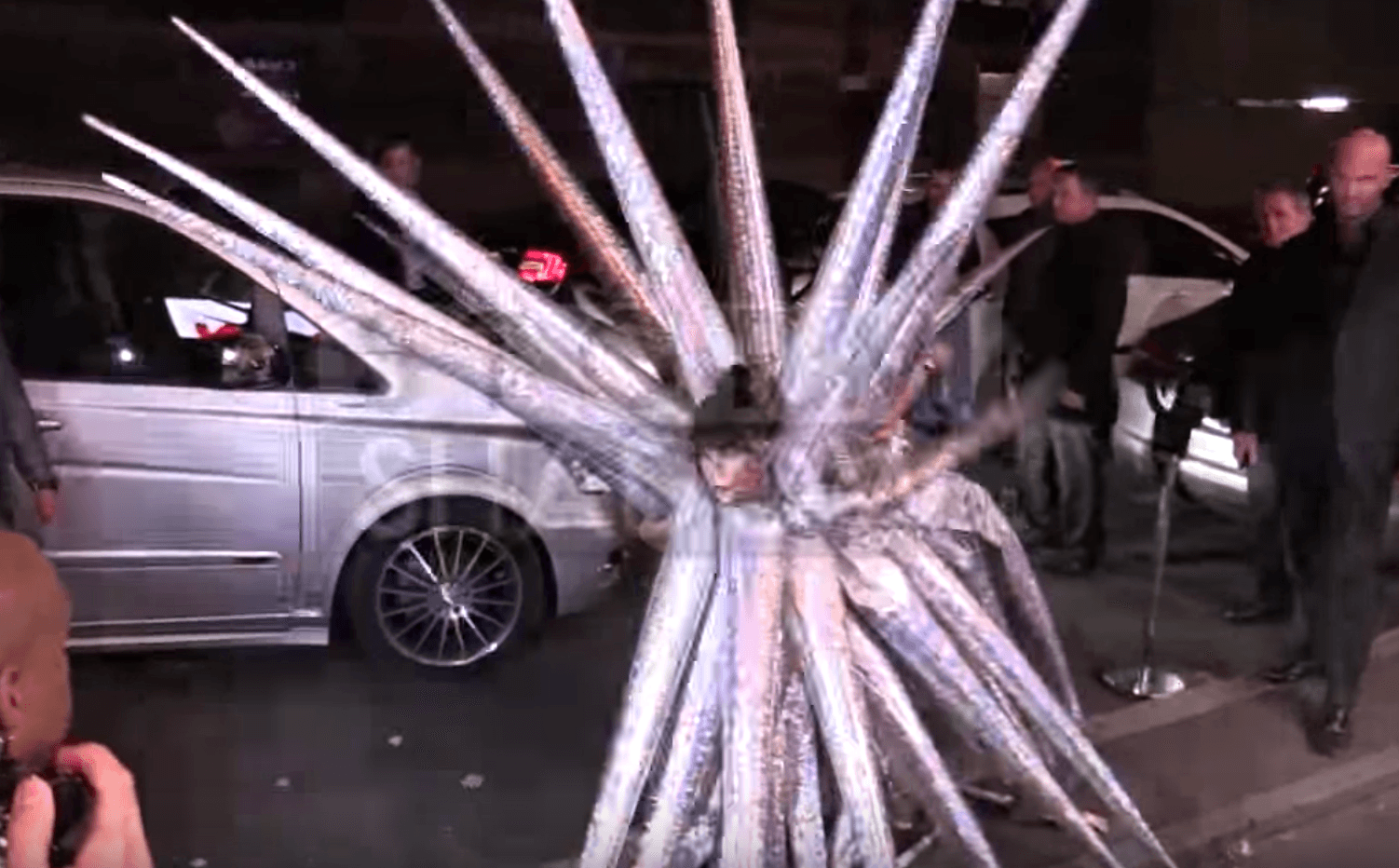 That’s one way to demand your personal space. | Storm Shadow Crew via Youtube

Another questionable outfit choice? The inflatable Christmas ornament outfit Lady Gaga wore to the VIP Room in Paris in 2014. Haus of Gaga never ceases to amaze (and frighten) us.

Next: We can’t believe this ensemble was made out of human hair. 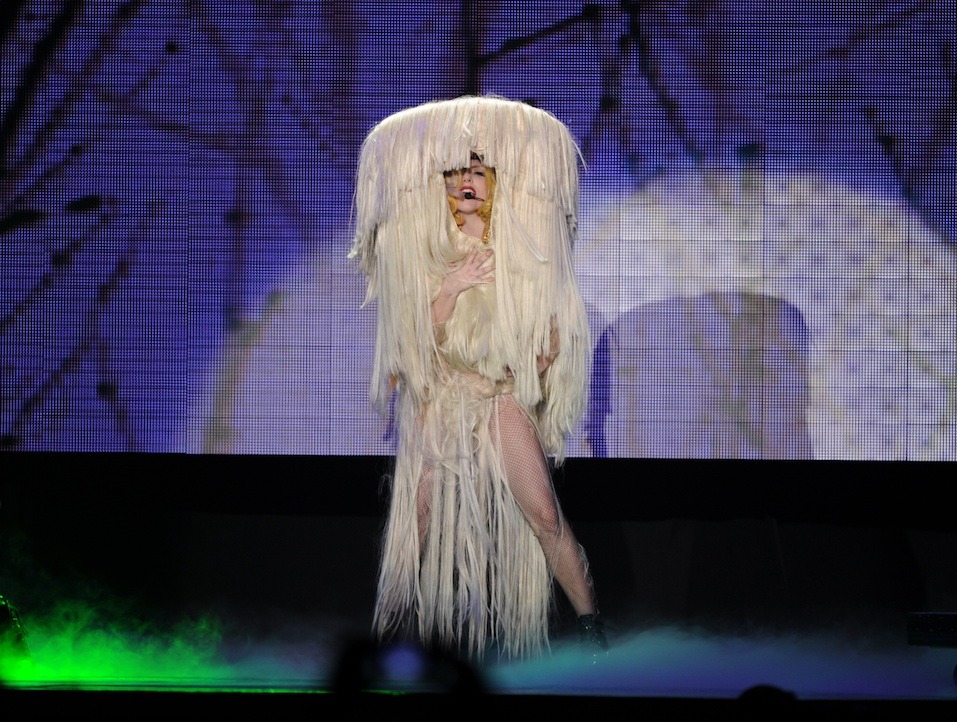 That is some wig. | Fred DuFour/AFP/Getty Images

In 2010, Lady Gaga performed at Palais Omnisports de Bercy in nothing but a wig and fishnets. The wig sort of resembled a jellyfish and was made out of human hair. No thanks!

Next: Lady Gaga ditches her 8-inch heels for something a little more, uh … practical? 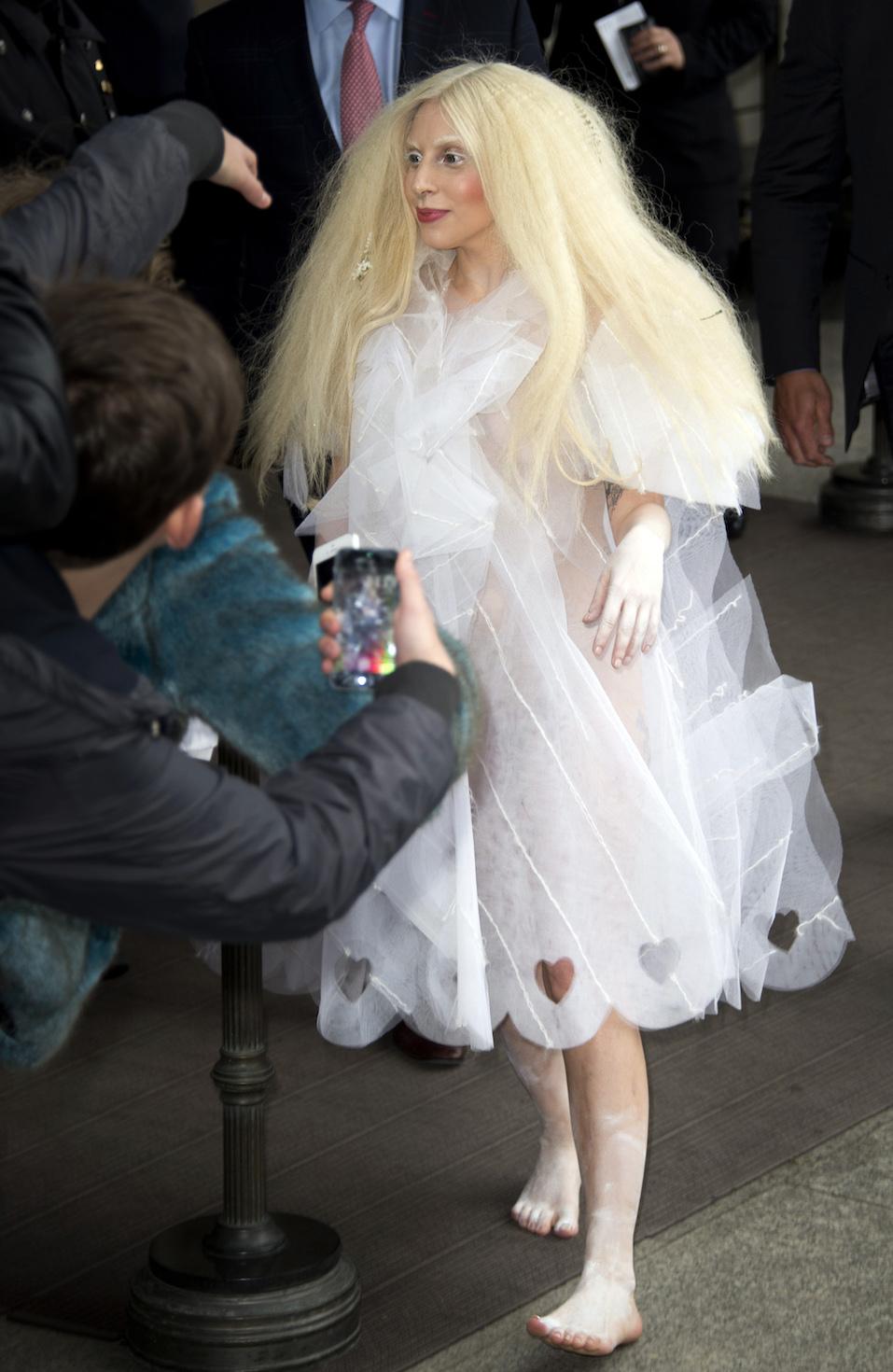 Lady Gaga is known for wearing sky-high platform heels. But, in 2013, the singer was seen leaving her Berlin hotel in something a bit more practical — her bare feet. In addition to her lack of shoes, Gaga wore a long blonde wig, see-through babydoll dress, and snow queen-inspired makeup. Talk about making an exit! 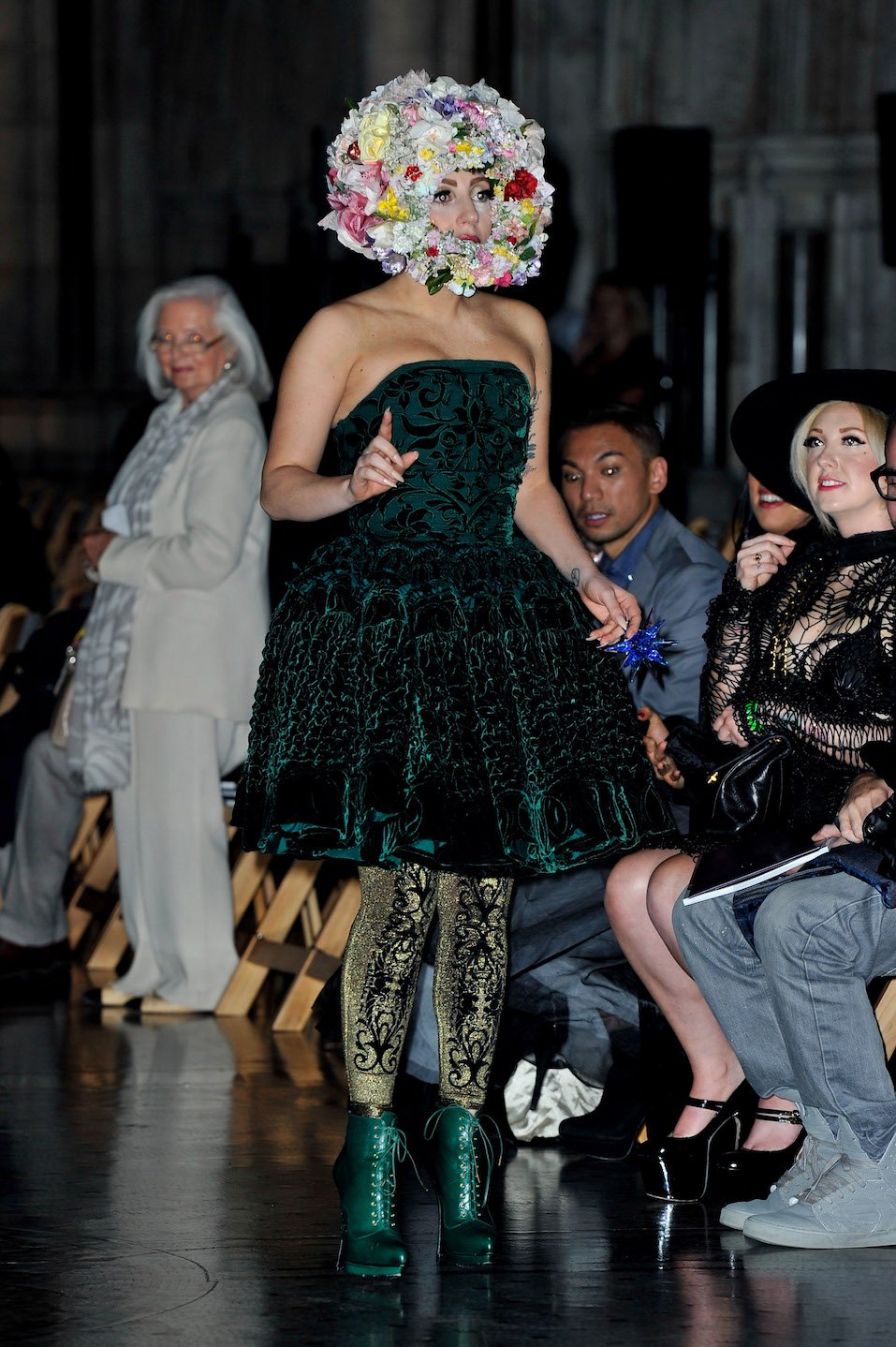 She is one with the earth. | Gareth Cattermole/Getty Images

What do you wear to a famous milliner’s fashion show? A hat (or, helmet?) that looks like a floral arrangement, of course! In 2012, Gaga was spotted front row at Philip Treacy’s Spring/Summer 2013 fashion show in one of the most bizarre hats we’ve ever seen.

Next: Off with her head! 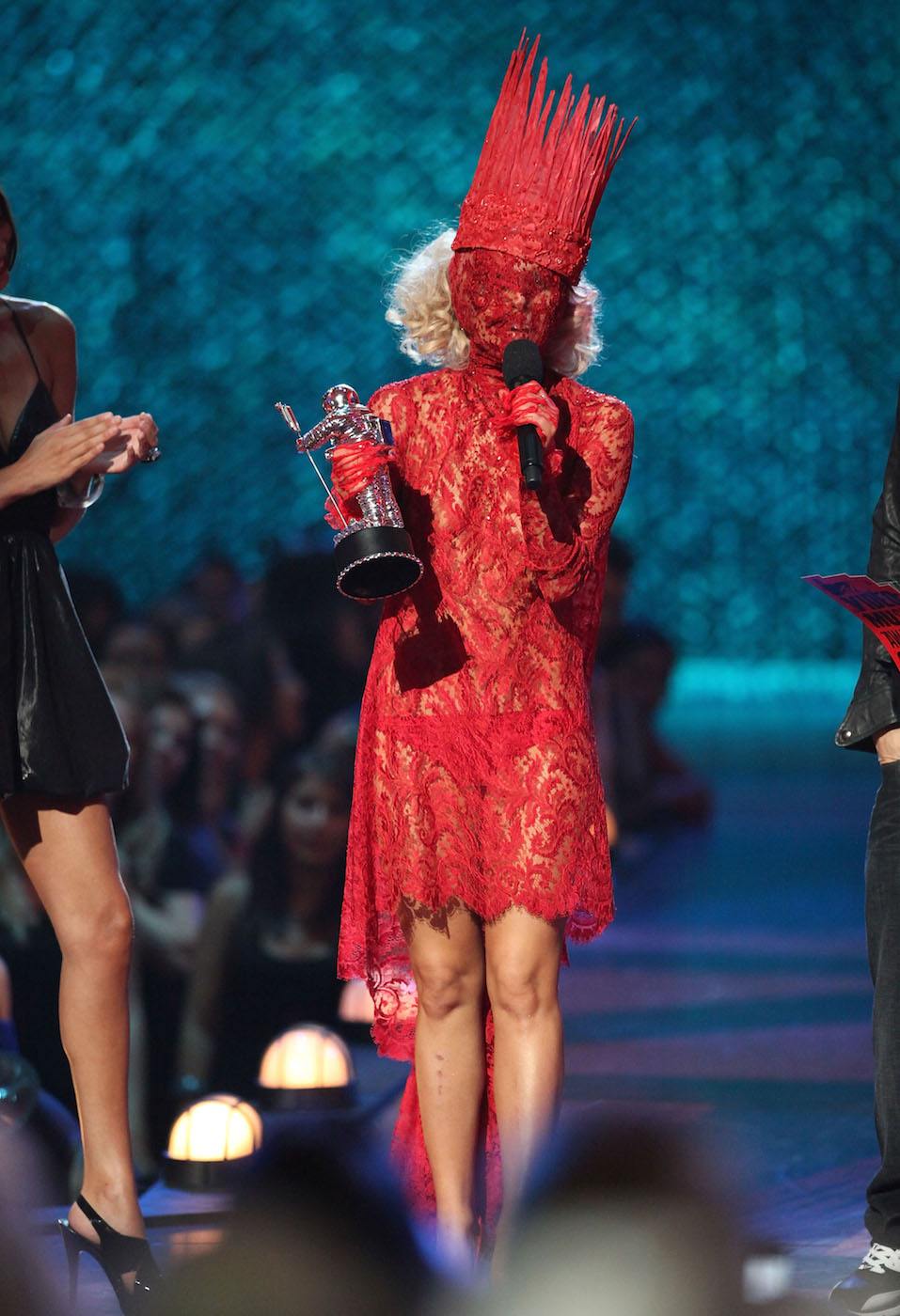 She likes to wear things that obstruct her vision. | Christopher Polk/Getty Images

It’s no secret Lady Gaga likes to channel a variety of different characters in her fashion choice. And, at the 2009 MTV Video Music Awards, the singer-songwriter accepted a moonman for Best New Artist in see-through red lace dress with a matching face mask, gloves and crown.