Before buying a laptop or desktop, make sure you know the fundamentals of computer shopping and the numerous common mistakes people can make. Now let’s see how the ultra-portable Lenovo Yoga 900s holds up. 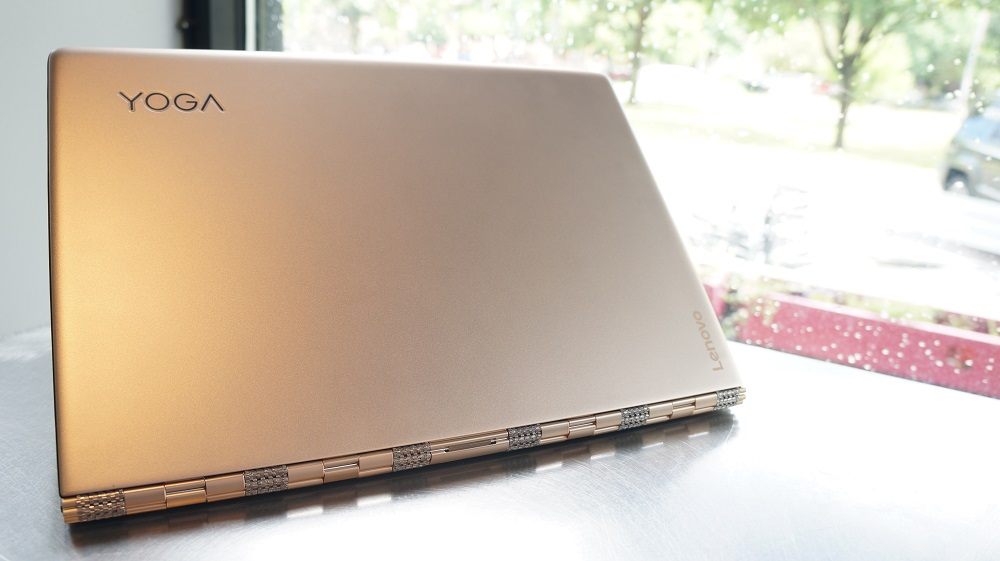 The Lenovo Yoga 900s is undeniably a pretty little computer. Its sleek design — the thing is incredibly thin — looks great, and the matte metallic surfaces look and feel like they should for a $1000+ computer. The top and bottom of the computer are made of the same metal material for a design that feels complete. The keyboard is similarly constructed with coloring to match the exterior of the computer. Even the trim of the touchpad will match the metal color. Most of the remaining bits are a matte black, which contrasts nicely. The crowning visual feature of this computer line is the watchband hinge, which adds a splash of “classy” to what already looks like an elegant computer. 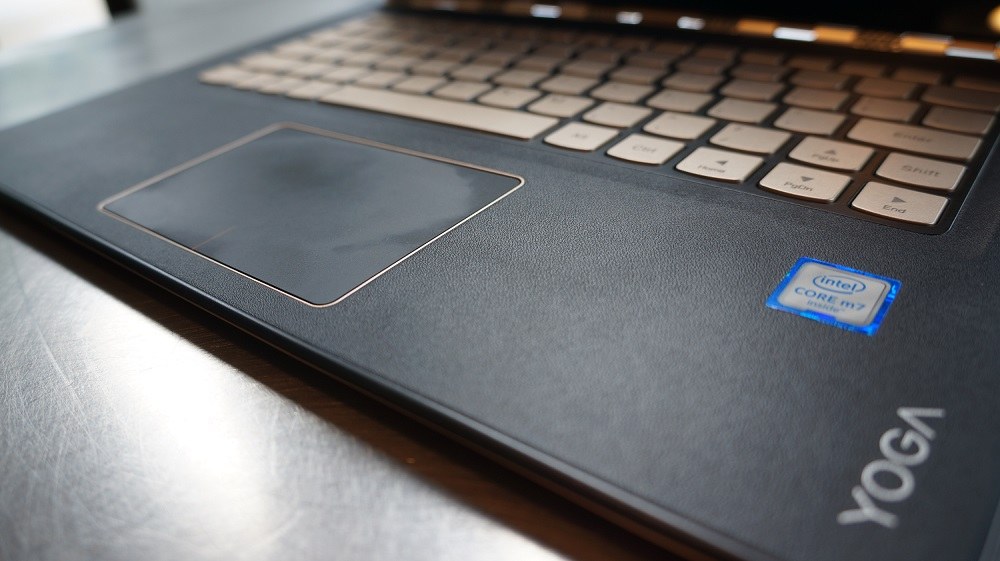 Not everything is perfect though. With the laptop open, the area around the keyboard and touchpad is textured material reminiscent of a leather briefcase. It has a nice look to it at first, but the grooves help it catch dust and lint that isn’t easily swept off. The touchpad itself gets a bit greasy in a short matter of time, throwing off the otherwise clean look of the computer. Still, the computer overall has a great look to it that a few kinks can’t fully diminish. 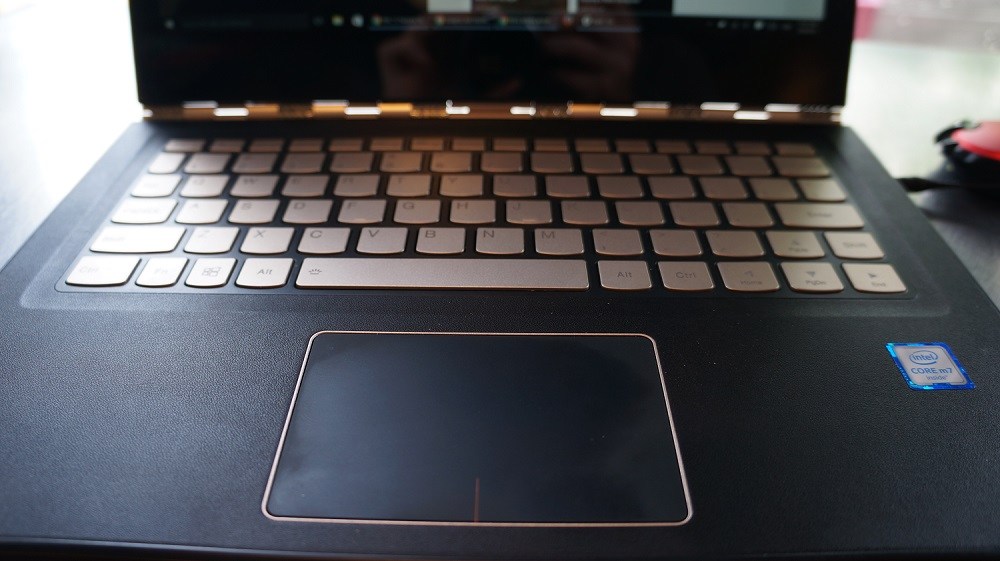 The Yoga 900s isn’t a computer that just looks good. It feels pretty good, too. The keyboard types nicely, with keys that depress easily but without a lot of wiggling in their slots. The keyboard backlighting does an admirable job in dark settings, with multiple brightness levels (though it doesn’t help in light settings, even at its brightest). The touchpad feels smooth and is easy to use. The touchscreen felt responsive, and my fingers never got stuck sliding along the glass surface. The frame of the computer doesn’t feel flimsy at all despite its thinness. The fancy watchband hinge isn’t just pretty, as it also offers a solid hold for the screen in any angle.

Here’s where some of the problems begin though. The hinge’s hold is so firm, and the case so sleek, that it can be a pain to get the Yoga 900s to open. There is no particular part of the screen to get a good grip on to open it, and given the light weight of the computer (you could leave the house without realizing it’s not in your bag, it’s so light), there’s essentially no way to open it one-handed. And it’s still awkward with two hands. 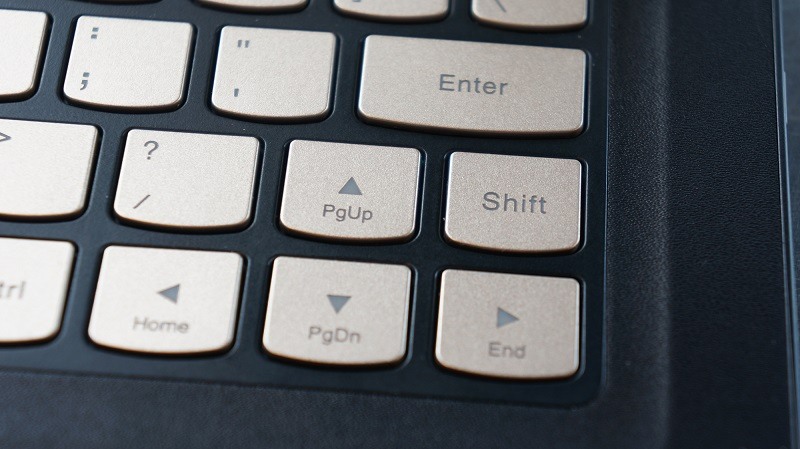 A number of other issues stem from the computer’s size (disclaimer: I’m 6’3″ and have the hands of someone that height). The keyboard is very compact, with a lot of sacrifice on the outer edge keys. Pulling off shortcuts like ctrl+tab involved shifting my whole body, and typing in general brought my arms in at an unusual angle that felt cramped and made using my pinky fingers for anything difficult. Then there was the right shift key, which was pushed to the right of the directional up key. This was a true offense. Not only was it almost impossible to hit the right shift key, but I’d regularly be hitting the up key instead. So rather than getting a capital letter, I’d start typing in the middle of the line above — if you’re career involves a lot of typing, this could be a real headache.

A noticeable element missing from the Yoga 900s is a slot for a lock. A computer as expensive and flashy as this, not to mention so small and light, would make for an easy steal. And without the ability to lock it up, it’s just that much more vulnerable. 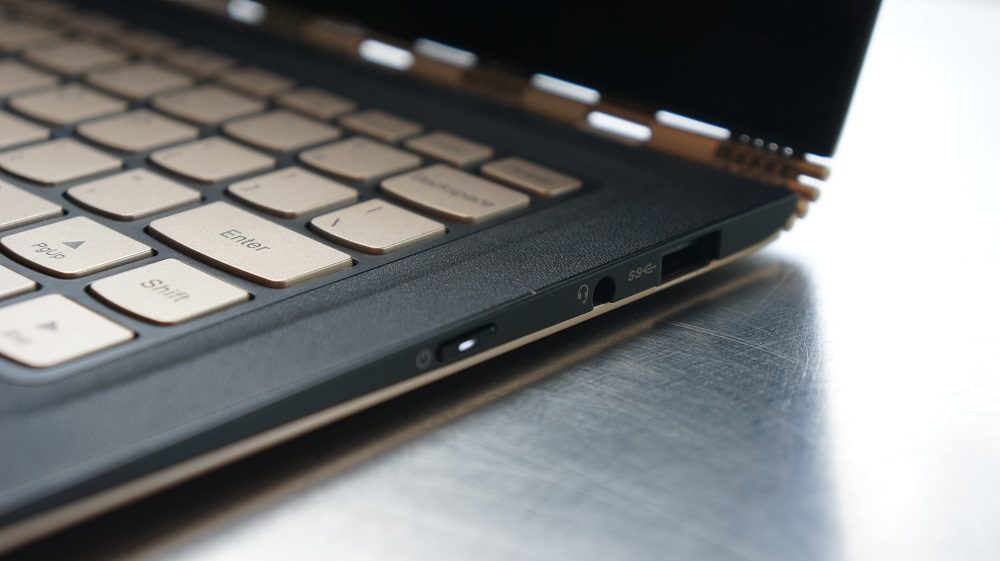 For I/O, the Yoga 900s is powered by a special USB port which doubles as a normal USB when you don’t need to charge it. There’s also a high-speed USB 3.0 port, a USB-C port, a 3.5mm headphone/microphone combo jack, a power button, and a system restore button. It might not sound like a lot, but it will likely be sufficient (more on this later).

Since the Yoga 900s can bend over backward, letting you use it like a laptop, a standing tablet, or a handheld tablet, this needs to be factored in. While the watchband hinge is likely more robust than the type of dual-purpose laptops that have a spinning hinge, the Yoga 900s is actually awkward to use as a handheld tablet, as the keyboard is exposed on the back when used this way. 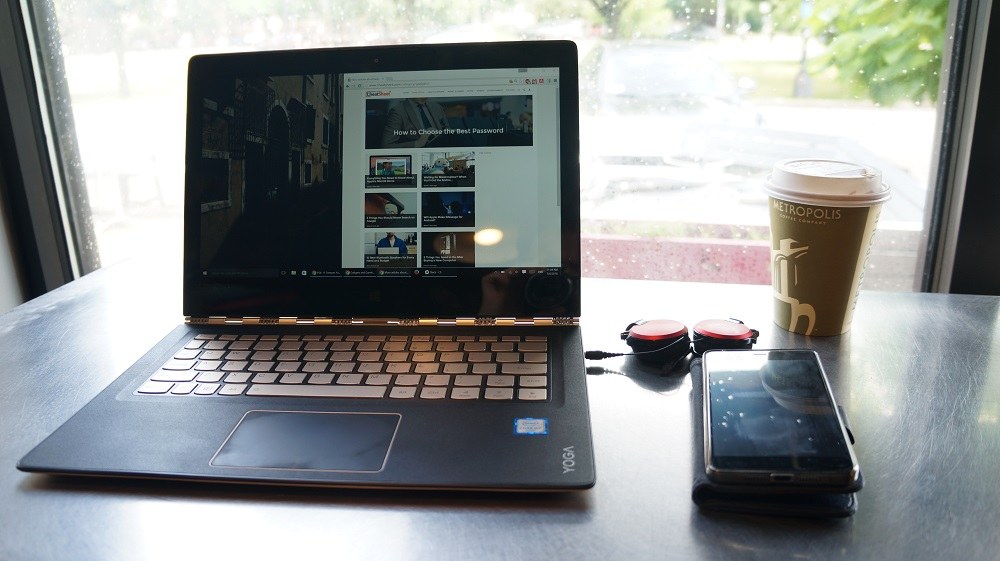 Build and aesthetic are important for a computer you can count on and cherish (if you think that’s something you should do for an inanimate object), but they don’t amount to jack if the machine can’t perform. So how does the Yoga 900s perform? Let’s see.

The model I reviewed had an Intel Core m7-6Y75 1.2GHz processor with Intel HD Graphics 515, a 256GB SSD, and 8GB of 1600MHz RAM. I never ran into trouble with the RAM, but I also never had 30 tabs open across five windows in my browser. For word processing and moderate browsing, the Yoga 900s held its own just fine. Video playback was smooth as well, though I had no 2K content to test out on the QHD display. Running Windows 10 and with an SSD, startup was quick. Screen clarity in sunlight was passable in a pinch, but it would get to be a headache for a long session.

Battery life was admirable for such a small device with a high-resolution display that I usually kept above 50% brightness. I could go most of the workday with it in use and unplugged. With a full charge, there was no worry of it dying midway through a couple movies.

The thing is, with its dual-core m7 processor, the Yoga 900s is really not much in the way of a workhorse. Even though it has a 2K display, you’re not going to want to edit 2K video on it. You might do some light photo editing. And don’t even dream of gaming. I tested out both Rocket League and Overwatch on it. Neither game would be playable at 1440p, and even with settings and resolution turned way down, both had sputtering framerates, well below 30, on the Yoga 900s (Note: This is not advertised as a gaming computer, but it was worth checking). Fortunately, because you won’t be doing video editing or gaming on this computer, the smaller SSD size and small number of USB ports won’t really be a hindrance for the Yoga 900s.

Then there’s the matter of heat. Being a slim machine, it doesn’t have much in the way of cooling, and even under the load of moderate browsing, the upper right corner of the base would get uncomfortably warm. Heated up, it was unpleasant on my lap, and toting around a cooling pad would kind of defeat the purpose of having such a small, ultra-portable laptop.

The touchscreen input worked well enough. The touchpad generally worked well, but tap-to-click consistently failed to register long, firm presses, so when I felt most adamant about clicking somewhere, it would let me down (this may be a software issue though.). The Yoga 900s also supports pressure-sensitive stylus input, which worked well enough in my tests, but I couldn’t recognize more than a few pressure levels with the Lenovo Active Pen — still a viable feature for those who want to mark up documents digitally or do some drawing. 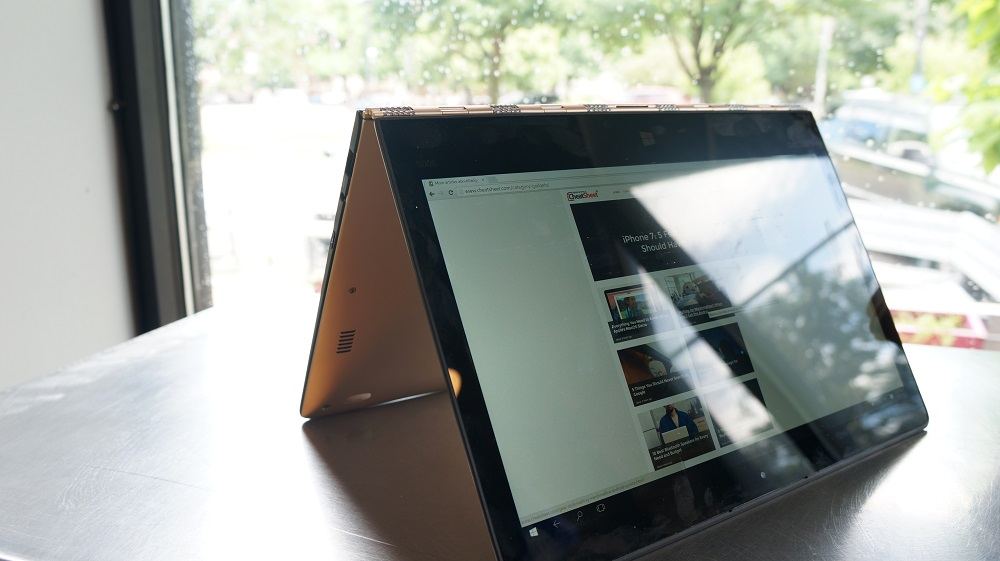 The Yoga 900s model (80ML000PUS) had a listed web price of $1299 at the time of reviewing, though was available for $1199 with an instant discount. Now, everything about the build and aesthetic calls for the Yoga 900s to be considered a premium laptop, and the price tag shouts premium as well. It’s a feat of engineering, as Lenovo touted it as the “thinnest convertible laptop on Planet Earth” when it was made, and yet it still managed great battery life.

The problem is that the key part of the computer — you know, the part that does the computing — feels rather lacking for a $1000+ machine. Now if the Yoga 900s was offering an experience that couldn’t be had elsewhere, maybe it would be worth it, but that doesn’t appear to be the case.

It doesn’t take much looking to see that Microsoft Surface Pro 4 with 8GB of RAM, a 256GB SSD, a higher resolution screen (2736 x 1824), a more powerful Intel Core i5 processor, an included pen input, and a detachable keyboard with a proper right shift key, can be bought for $1299 (though that keyboard is an extra $129). And that’s from Microsoft’s online store — if you shop around, you can likely find the same configuration available for cheaper. So why go for the Yoga 900s when there are stronger machines available with similar form factors and prices? The only clear answer is its aesthetic — it’s a highly portable computer that handles basic workloads and media consumption just fine with the added flair of jewelry. But if you want to get the most performance for your money, there are better options out there.