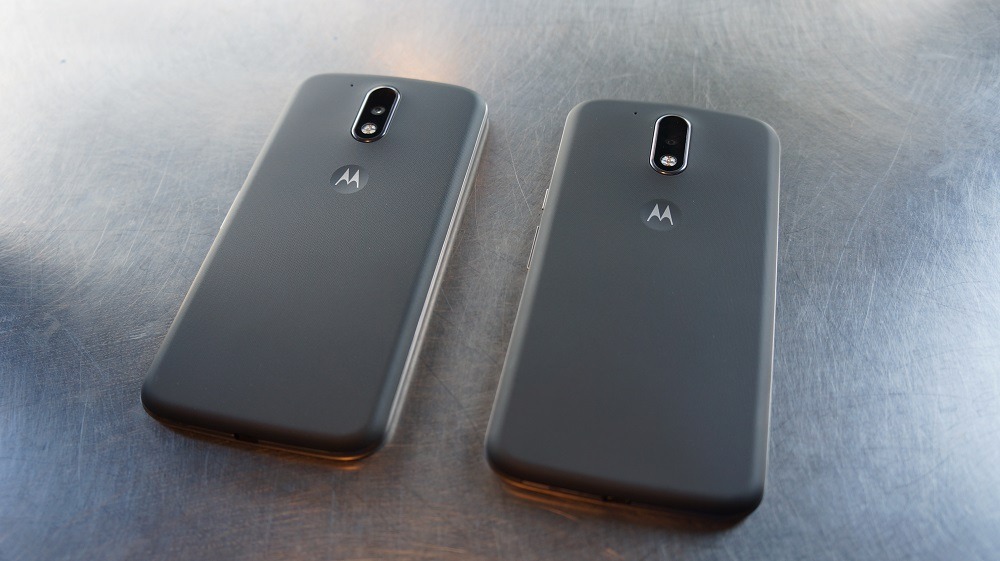 Before buying a smartphone, make sure you know the fundamentals of phone shopping so you understand all the little details you’ll come across. Now let’s see how Motorola’s low-cost Moto G4 and Moto G4 Plus hold up.

Moto G4 and G4 Plus – Unboxing

Moto G4 and G4 Plus – Aesthetic

First thing first, the Moto G4 and Moto G4 Plus are 95% identical visually. The only difference is the G4 Plus has a square fingerprint scanner just below the screen, and the rear camera has a noticeably large sensor and two little points where the laser-focus devices are housed. Otherwise, the two phones appear the same, and that aesthetic is pretty nice.

The metal frame gives the low-budget phone a higher-end look, especially as that metal trim is echoed around the earpiece and camera on both phones, and around the fingerprint scanner on the Moto G4 Plus. All the curves are smooth, and even though the camera protrudes slightly, the backplate rises gradually to meet it, so it won’t snag on your pocket. 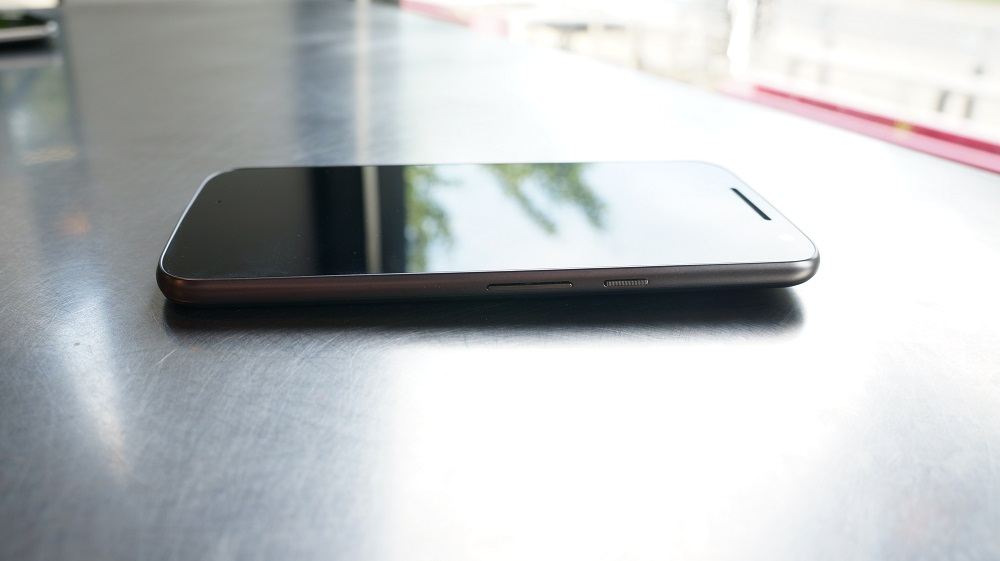 I reviewed the “Dark Moon” (basically black) version of the phone, which let the front of the phone appear almost perfectly black when the screen was off, though certain lighting made the border between the screen and bezel visible. Motorola has been doing it’s best to make phones that are aesthetically pleasing to users, and to that end has customizable backplate colors and, in the case of this phone, the metallic trim around the camera can also be customized, though any color changes will leave the camera trim at odds with the metal frame of the phone.

The plastic backplate is easily the weakest point of the phone’s design, but even that isn’t so bad. The texturing makes it feel better in the hand (on top of being less likely to slip out of your hand), and also gives it better visual appeal. The backplate also snaps into place snug with the metal frame, giving it a relatively seamless look compared to a lot of other plastic-backed phones. 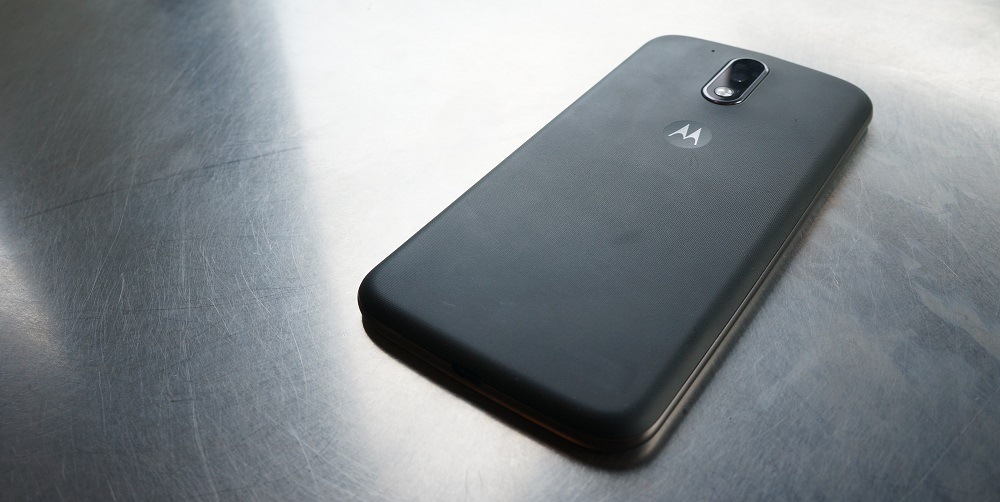 The same metal trim that makes the Moto G4 and G4 Plus look good also goes a long way toward giving the phone a solid build. The phones didn’t feel flimsy and didn’t give way to some light flexing, though that’s not to say that a bend test like those conducted by tons of YouTubers on Apple’s iPhone 6 won’t do serious damage to the phone. The metal edge also extends slightly above the screen, so if the phone falls onto the floor or another large, flat surface, the frame should be the only thing making contact. This could go a long way toward protecting the screen.

Though many people are flocking toward bigger and bigger smartphones, the Moto G4’s size felt a bit unwieldy to me. With a 5.5″ display and and 6″x3″ body, the Moto G4 isn’t small. It’s also not super thin. Though it fits well enough into a large pocket, it’s a lot to hold in hand, and difficult to reach the top of the screen in single-handed use.

One great feature that Lenovo thankfully didn’t drop from the Motorola line is a MicroSD slot, allowing users to expand the phones storage by as much as 256GB, which should be plenty of space for a large on-the-go music and movie library, with space left over for photos and videos captured on the phone.

The SIM card slot was surprisingly behind the times, built for Micro SIM, and thereby requiring the obnoxious and finicky plastic adapter to insert a Nano SIM. Though, to be fair, that does leave the door open for anyone carrying over an older SIM. 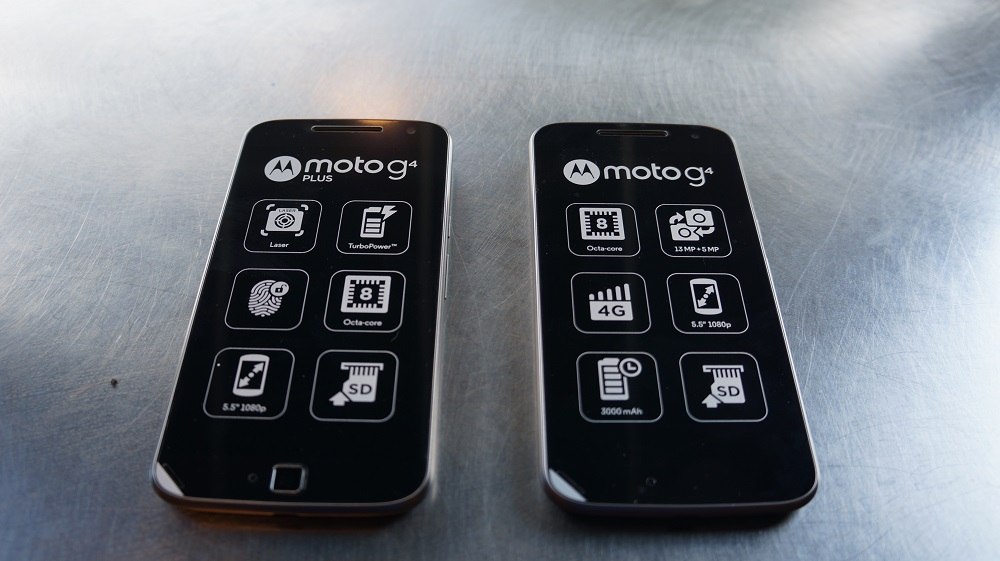 Moto G4 and G4 Plus – Performance

Running on the Snapdragon 617 chipset with 2GB of RAM, the Moto G4 and G4 Plus perform surprisingly smoothly. App switching didn’t run into a lot of stuttering, and opening apps from the home screen was quick. Standard Google apps came on in a flash, and loading apps like Hulu and HBO Now seemed to be more limited by the speed of the internet connection than by the speed of the phone. Pokemon GO was the only point where I really noticed hiccups, as jumping between different Pokemon required pulling up different 3D models and animations, and could cause the phone to stutter. So the Moto G4 and G4 Plus might not be up to the task of intensive 3D mobile gaming, but are otherwise capable smartphones. Even scrolling through a long webpage loaded with GIFs didn’t cause the phones to stumble.

The Moto gestures made using the phones even easier, as the camera could be loaded quickly by simply twisting my wrist twice. From there, both cameras performed admirably. Though the Moto G4 Plus has a 16MP sensor to the G4’s 13MP, I can’t say I noticed a significant improvement in image quality, nor did the laser focus make a major difference in the process of snapping a few pictures. That said, both rear cameras got the job done capturing a scene, and the G4 Plus camera did seem to handle high contrast scenes better. You can see my Moto G4 camera comparison here, with the OnePlus X thrown in as well. The front-facing cameras were also plenty sharp enough. At 5MP, anyone wanting a strong selfie game won’t be disappointed. While a lot of new phones are making the leap to 4K video, the Moto G4 and G4 Plus do lag behind, only supporting 1080p 30fps video, and lower resolution slow-mo recording.

The screens were adequate. While many higher-end phones are jumping to higher and higher resolutions, 1080p on a smartphone is still perfect for almost everything (except perhaps virtual reality) and lets the processor focus on more important things than rendering the display. At full brightness, the screen was also easy enough to see even in sunny weather. And while the screen competes with the sunlight, the speakers do a decent job of challenging background noise, though a whispered conversation in your favorite Netflix show is more than likely going to be drown out by a truck driving by if you choose to watch outside. (Note: Side-by-side with the Moto G4, the Moto G4 Plus screen had a faint but noticeable yellow tint.)

The battery kept up pretty well, too. Sitting idle, the batteries would only trickle out. I tested the Moto G4 battery by running a Game of Thrones stream over Wi-Fi (the cell radio was left on) from HBO Now with the screen at full brightness and the audio off. The battery was at 90% at the beginning of the test. After 3.5 hours the battery was down to 46%. That’s not bad, considering the remaining juice should get a user through the rest of the day, unless they’re planning more streaming. Using headphones, with the brightness turned down, and watching videos saved on the phone so that the phone can be put in airplane mode, the Moto G4 and G4 Plus can likely manage a fairly long TV marathon.

On the Moto G4 Plus, the fingerprint scanner actually performed quite well. I was able to set it up to use several different fingers, and it rarely failed to register. Given that the phone is a bit unwieldy, the fingerprint unlock method was preferable to swiping in an unlock pattern.

One unusual performance failure was a long delay in connecting to Verizon’s LTE network after booting the phone. This likely isn’t some fault of the phones though, as connecting to T-Mobile was plenty quick after boot. 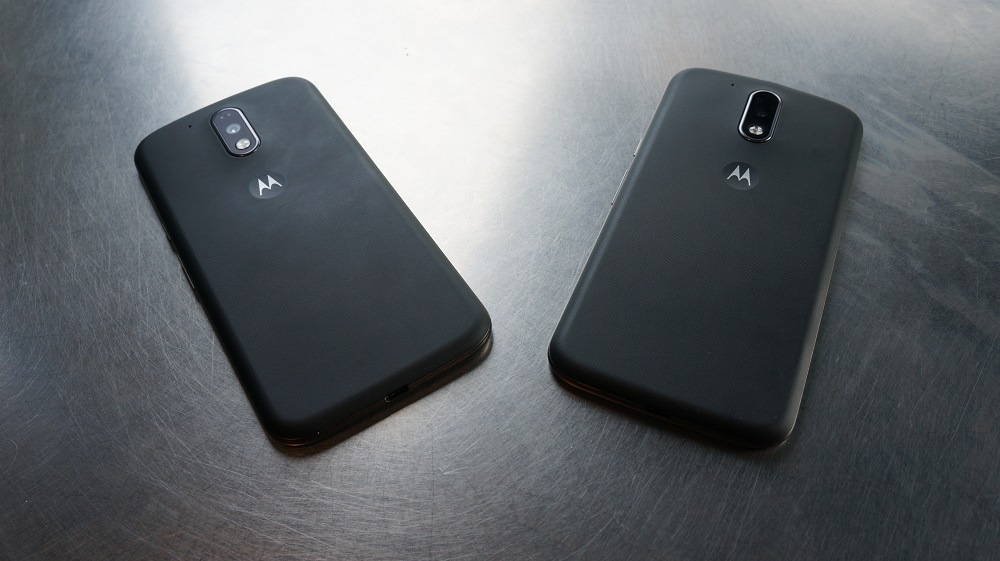 These are pretty good prices for unlocked phones that perform well and have a solid build. Moto phones also aren’t full of bloatware taking up a bunch of the storage, and have a reputation for receiving Android OS updates before a lot of other phones. With that in mind, both the Moto G4 and G4 Plus seem like fairly good buys. The fingerprint scanner and enhanced camera on the Moto G4 Plus may be worth the extra $50 over the non-Plus model.

That said, there is the matter of competition, as the Moto G4 and G4 Plus aren’t entering an empty field as the sole budget Android phones. Compared to the fully loaded Moto G4 Plus, shoppers can instead buy a $299 Moto X Pure Edition that features a larger, higher-resolution 5.7″ screen; higher resolution camera with 4K video recording; lower base storage but MicroSD support and 3GB of RAM; and an arguably sexier design.

Competing at the lower end of the price point, the OnePlus X can be had for $199 and has a number of edges on the Moto G4. Though the OnePlus X only has a 5″ screen, the navigation buttons can be turned on below the screen, freeing up some screen space — plus it’s an AMOLED screen, helping save battery and offering better contrast. The base OnePlus X also comes with 16GB of storage, MicroSD expandability, and a winning 3GB of RAM. It has a similar premium metal frame and a non-plastic back, for a sexier design, on top of being slimmer in all dimensions. With similar cameras, the OnePlus X takes the cake over the base Moto G4 in my book.

The sweet spot here seems to be for the base Moto G4 Plus, as it comes with that slightly better camera, fingerprint scanner, and quick charging capability. At $249, it’s only a little more expensive than a OnePlus X and has some better features, and it’s cheaper than the Moto X. Definitely a solid buy for someone trying to dodge the hefty price tag of the latest Samsung or Apple flagship phones while still getting something that looks good and performs admirably.

What about the Moto G4 Play?

For people that like the look and feel of Motorola’s Moto G line, the Moto G4 Play offers an extra affordable entry into that aesthetic. The build is nearly the same, but it cuts some corners in the tech specs to bring the price into the sub-$200 range. For someone mostly using their phone for browsing the web, texting, and calling, the Moto G4 Play is an admirable option. It has a downgraded screen at a 1280×720 resolution, an 8MP rear camera, and a slightly smaller 2800mAh battery that is surprisingly removable. A less powerful Snapdragon 410 chipset allows the phone to do the job it needs to, but may prove insufficient for more demanding tasks, such as more advanced mobile games. The Moto G4 Play still features an SD card slot to make up for the stock 8/16GB of internal storage. Is it an exciting phone? Not really. Is it an affordable phone that can get the job done? It certainly seems so, and it has a solid and appealing build to top that off.

Moto G4 Plus specifications as reviewed: