Before buying a laptop or desktop, make sure you know the fundamentals of computer shopping and the numerous common mistakes people can make. Now let’s see how the thin 2-in-1 Lenovo Yoga 910 manages.

Popping the Yoga 910 out of the box, it felt a lot like it’s predecessor, the Yoga 900s (heck, even their packaging was nearly identical). It’s a sleek, metal-bodied laptop with a flashy watchband-style hinge that makes it look as much like a luxury device as anything else. My experience with the Yoga 900s was good, although soured by what seemed to be a lack of power for such an expensive device.

Both the Yoga 910 and Yoga 900s are 2-in-1 slim laptops that can fold over backwards to stand in an “A” position for media consumption, or go further to function as a Windows tablet with a touchscreen and stylus support. The watchband hinge is surprisingly sturdy in the Yoga 910, as it was in the 900s, and larger screen of the 910 makes for a slightly less portable but more functional machine.

The metal body felt great to the touch and looked equally good (though is definitely the kind you need to be careful not to scratch or touch with greasy fingers). The inclusion of a fingerprint reader is a nice touch, as more and more tech adds this feature to make signing in easy and secure (unless you’re a heavy sleeper and have a sneaky friend/child).

The computer’s I/O is also sufficient for a machine of it’s type. Charging through a USB Type-C connector is welcome when there are still other ports available. The second USB 3.0 Type-C connector will be handy for those who need to make connections to other hardware while simultaneously charging, and a USB 3.0 Type-A connector means all older USB devices are ready for use as well. The only real downside about the Type-C charging port is the increased risk of bending the cord, but we all should be plenty careful with a $1000+ laptop anyway.

Being the new sibling in the family of the Yoga 900s, it’ll be useful to look at the improvements this model makes on its predecessor. As already mentioned, it is a bit larger, offering more screen space for actual work. One great but simple improvement Lenovo made on this model was at the edges of the laptop. The Yoga 900s suffered from being too seamless — it was way to hard to open the lid and next to impossible to do one-handed. The Yoga 910 (and it seems most new Lenovo laptops) adds a slight lip all the way around that makes it easy to open up.

The biggest improvement, though, is the inclusion of stronger hardware. While the older Yoga 900s had lower powered internals, the Yoga 910 is packed with more of the hardware you’d expect from a proper ultrabook. The whole series comes with the Intel Core i7-7500U processor, which worked plenty (though would likely struggle with intense audio or video work). The series also features fast DDR4 memory. The model I reviewed had just 8GB, but I never felt like it was too little or bogging down my work. 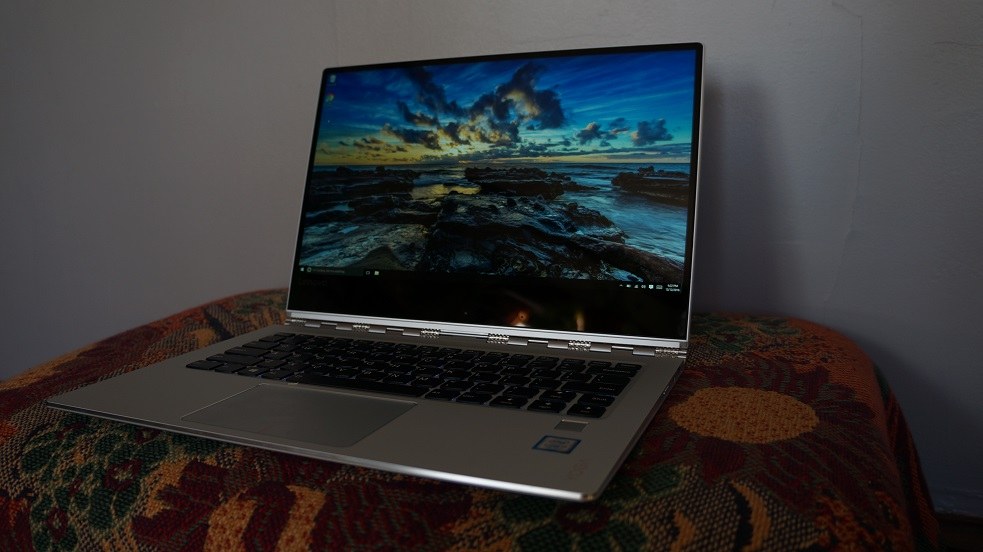 There’s a lot to be happy about with the Lenovo Yoga 910. As mentioned, it improves in a lot of ways on its predecessor. It might cost a few hairs over $1000, but it’s packing decent performance into a sleek, highly-portable device. It works well, and from most angles it looks great. The balance of performance and aesthetic is really satisfying, especially after the Yoga 900s leaned to far toward the latter.

The screen was fine at 1080p, but there are UHD models available for those that want their images really crisp. At 13.9 inches, I don’t think 4K is necessary unless you really want your Wi-Fi status bar to look sharp. One feature Lenovo never seems to get wrong is the audio, and these speakers on the Yoga 910 were no change. For such a small device, the audio was loud and clear. The speakers combined with an excellent battery made for great multimedia use. Over the course of a week, I was able to get several streaming sessions out of it without needing to charge the battery.

The keyboard and trackpad were solid. Nothing to write home about, but they did the job and left me with only one complaint (more on that later). Backlighting for the keyboard didn’t hurt either.

Though I didn’t test this, the inclusion of Intel HD Graphics 620 means the Yoga 910 is also ready for some light, light gaming — something its predecessor wasn’t cut out for. 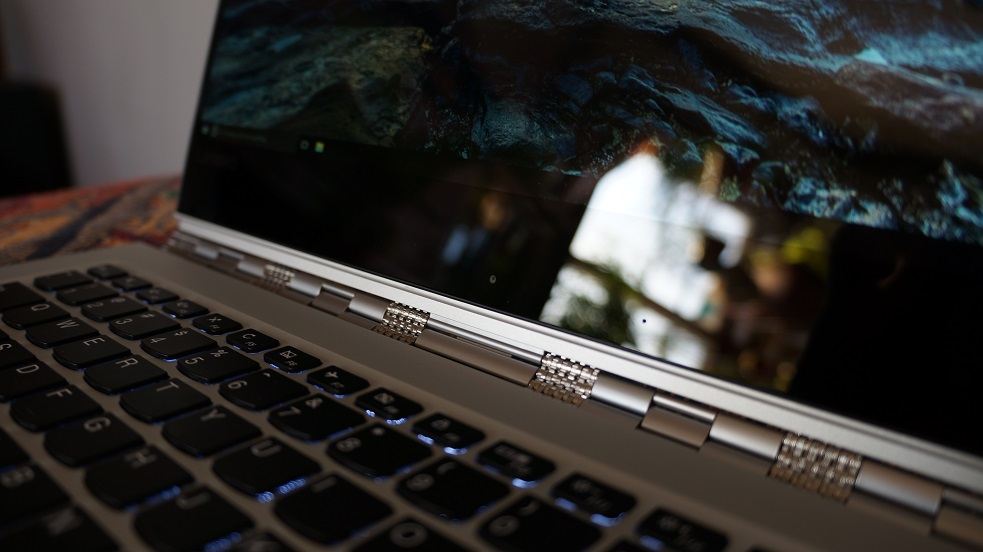 The machine is good, but not perfect. The few things that aren’t great are somewhat minor though, depending on your use cases. For instance, the placement of the webcam is great if you plan to do all of your video calling with the computer in its signature yoga pose. But if you have conference calls for work in which you might need to navigate other windows on your computer, the webcam placement at the bottom of the screen makes for an uncomfortably low angle.

The only other issue I encountered was the @#$% right shift key, which was also an issue with the Yoga 900s. As you can see in the image, the right shift key is tiny and snugly nested to the right of the up arrow key. More and more computers hurting for surface space seem to be doing this with the right shift key, so eventually muscle memory might negate the problem. But as it stands, this swap makes it all to easy to move between lines of text when you mean to capitalize, meaning you not only fail to have proper capitalization but are also frequently fixing errors in your typing. Not so great for writing-heavy workloads. And using an external keyboard basically defeats the purpose of this device’s portability. 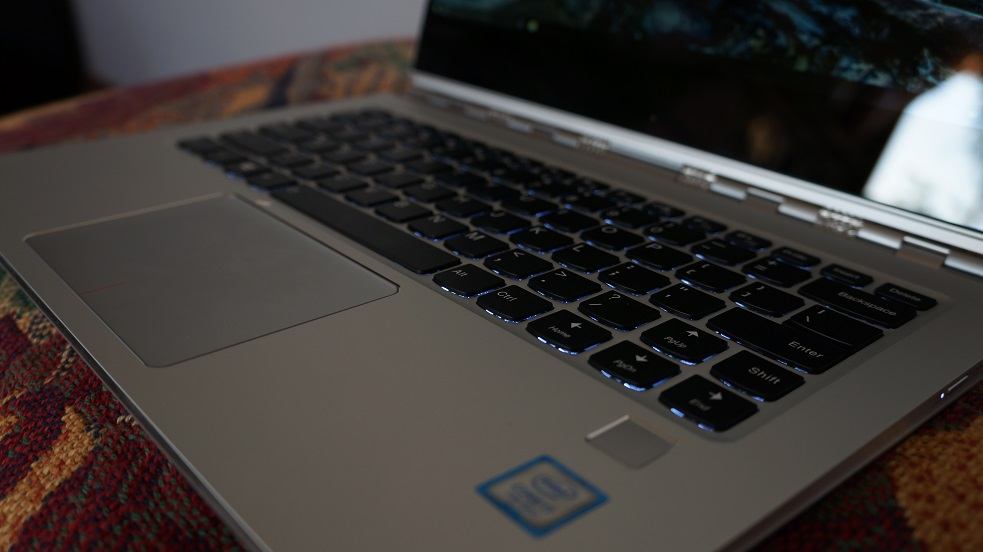 The Yoga 910 performs well but isn’t a cheap machine. That said, for an ultrabook, it’s also not terribly expensive. With a capable model available for around $1200 at the time of this writing, its readily competitive with the likes of Dell’s XPS 13 line.

The metal body feels a lot better, and far more solid, than a plastic build. The machine is no slouch. It’s configurable up to 16GB of DDR4 RAM, has a 1TB PCIe SSD for super fast storage, and can include a 4K display. The fully spec’d model only hit $1649 when last checked (on sale, but Lenovo has sales all the time), which puts it in the running against Apple’s 13-inch MacBook Pros.

If you need decent performance from something highly portable, and also want just a touch of chic, the Yoga 910 seems likely a solid contender (unless you’re like me and feel that a funky shift key is a complete deal breaker).