Like Ivanka Trump, the first lady has been one to watch when it comes to fashion. Always in the style spotlight, even before President Donald Trump began his political campaign, she has captured attention as a glamorous force to be reckoned with.

The 47-year-old Slovenian former model, who also has her own jewelry and cosmetics brands, doesn’t shy away from seductive, sartorial statements. But her brand of understated sexiness has epitomized a poised, gracious aesthetic.

Here, a glimpse back at 10 of Melania Trump’s most stunning moments. We can only anticipate that there will be many more impressive FLOTUS fashion statements in the future. 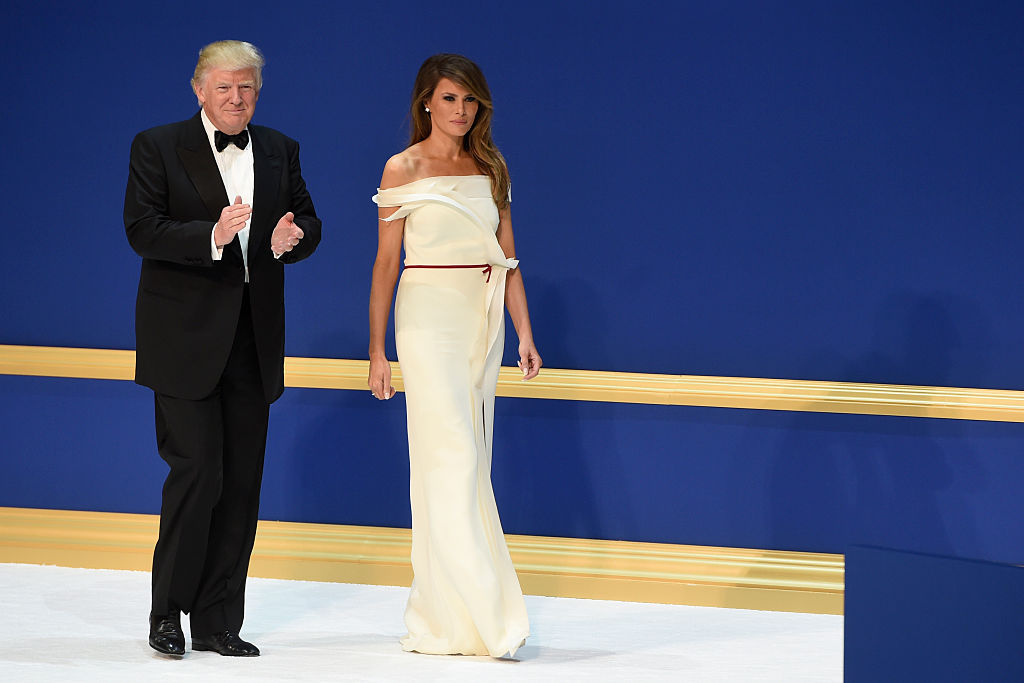 There is absolutely no denying that one of Trump’s most memorable moments is, and will continue to be, the look that she wore to the Inauguration Ball on January 20, 2017 in Washington, D.C. The newly appointed First Lady was dressed in a custom Herve Pierre winter white, off-the-shoulder gown that was quietly breathtaking. From the sculptural ruffle to the elegantly sleek lines of the gown, it was punctuated by the thin red silk ribbon at the waist. 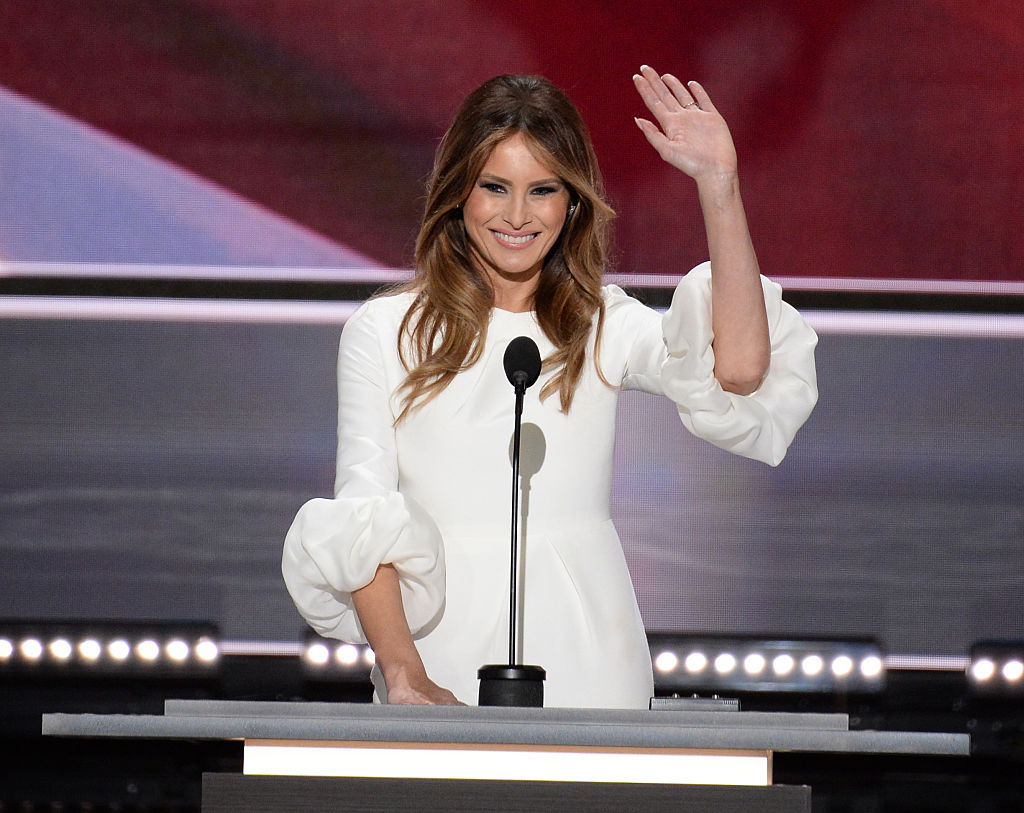 Melania Trump rocked this ensemble like no other. | ROBYN BECK/AFP/Getty Images

Rocking another white look to perfection, the First Lady kicked off her husband’s presidential campaign at the Republican National Convention on July 2016 with a stunning look. Her off-white Roksanda frock featured bell sleeves that certainly put a kick in this more minimalist sheath dress that was tailored beautifully to her frame. On some, those sleeves may have translated as rather silly and off-putting, but Trump carried them effortlessly. 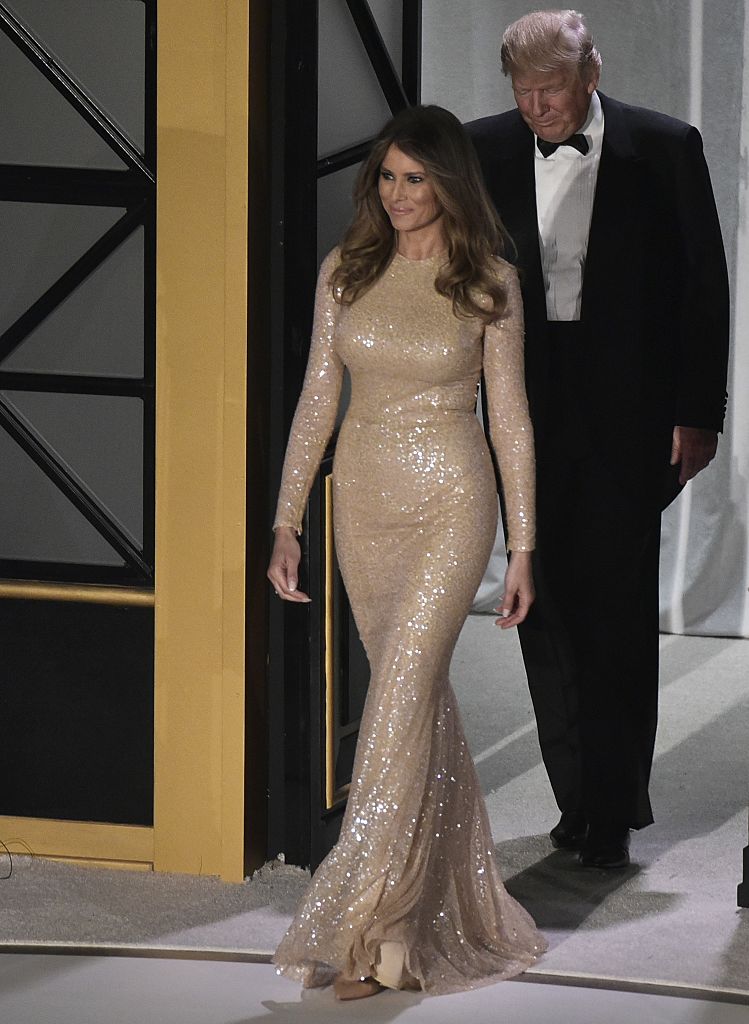 All that glitters was indeed gold for this stunning entrance on January 19, 2017 that would have made King Midas himself weak in the knees. On the evening before her husband’s Inauguration, Trump strutted out in this long-sleeve, sequin gown by Reem Acra that was dazzling in all the right ways. Take note: The subtler golden hue was far more sophisticated and alluring than its brassier, flashier metallic gold. 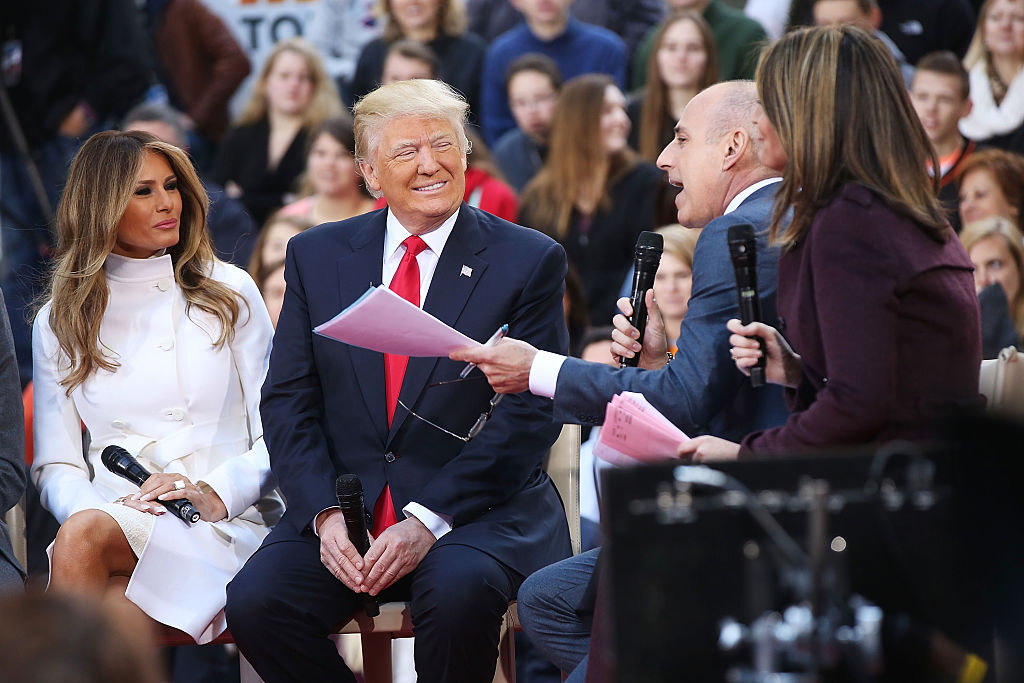 Yes, this is just a white coat. But it’s not just any white coat that Trump wore for an appearance on the Today show on April 21, 2016. Its crisp white hue is only matched by its double-breasted precision tailoring, allowing it to double as a dress. Simple though it may be, it’s striking by virtue of its effortlessness. 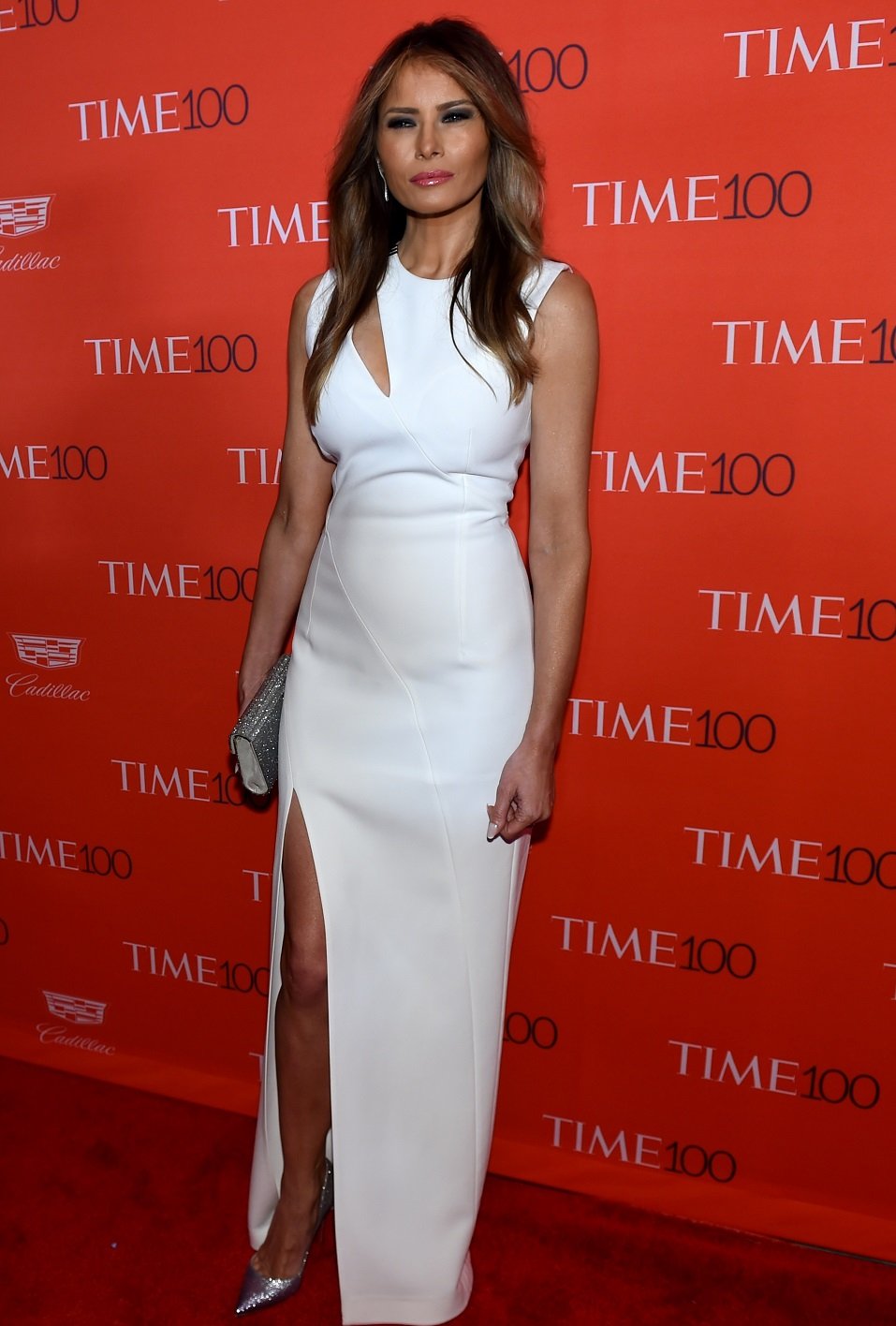 Trump went for something a little edgy in this outfit. | TIMOTHY A. CLARY/Getty Images

White isn’t the easiest color to wear — especially in a dress. But, Trump favors it for many occasion. This white Mugler bias-cut gown at the Time 100 Gala on April 26, 2016 had to make the list for its elegant sexiness manifested in the still-tasteful thigh-high slit and peek-a-boo-style, cutout neckline. 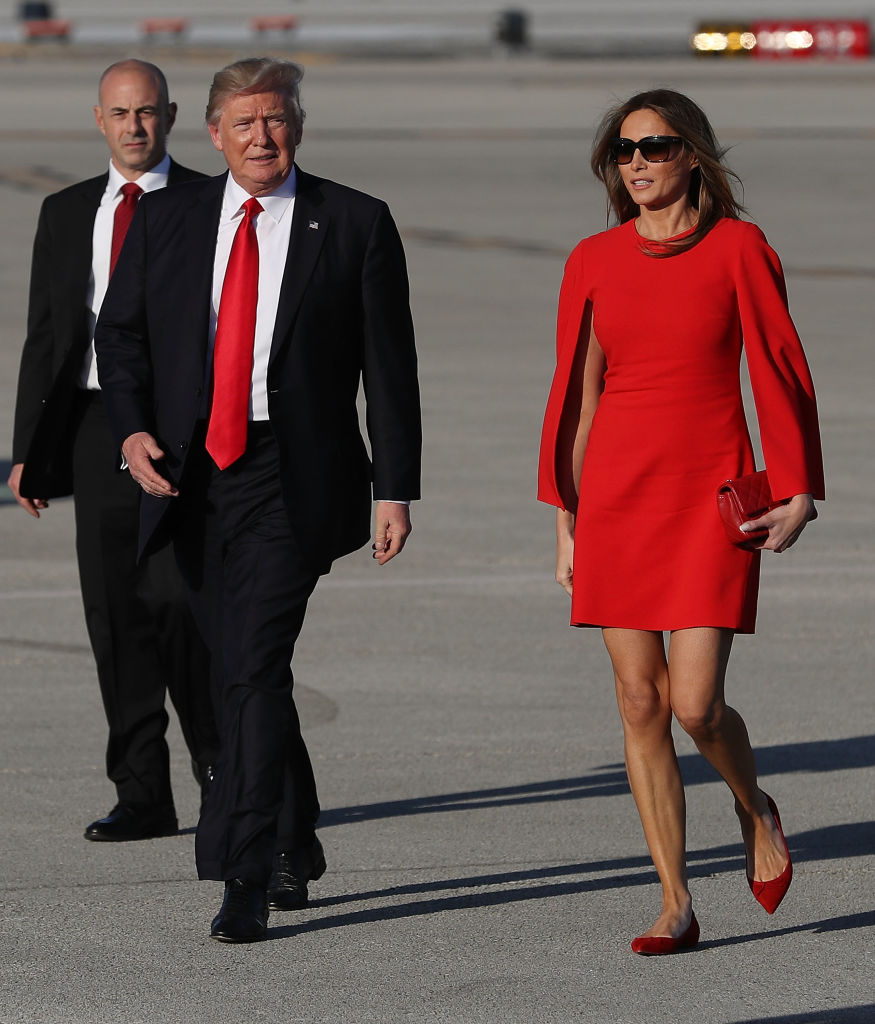 Trump is a true vision in red. | Joe Raedle/Getty Images

In one of her first public appearances since her husband’s inauguration, Trump was spotted on the airport tarmac in Palm Beach, Florida on February 3, 2017 on her way to their Mar-A-Lago estate. She made the tarmac her own fashion runway with this vibrant red Givenchy dress with a beautiful caped silhouette. But what makes the look so significant is not only its bold hue, but also that she wore it with a pair of matching flats — quite a departure for her standard stilettos. But, the ensemble was so chic, it didn’t need heels. 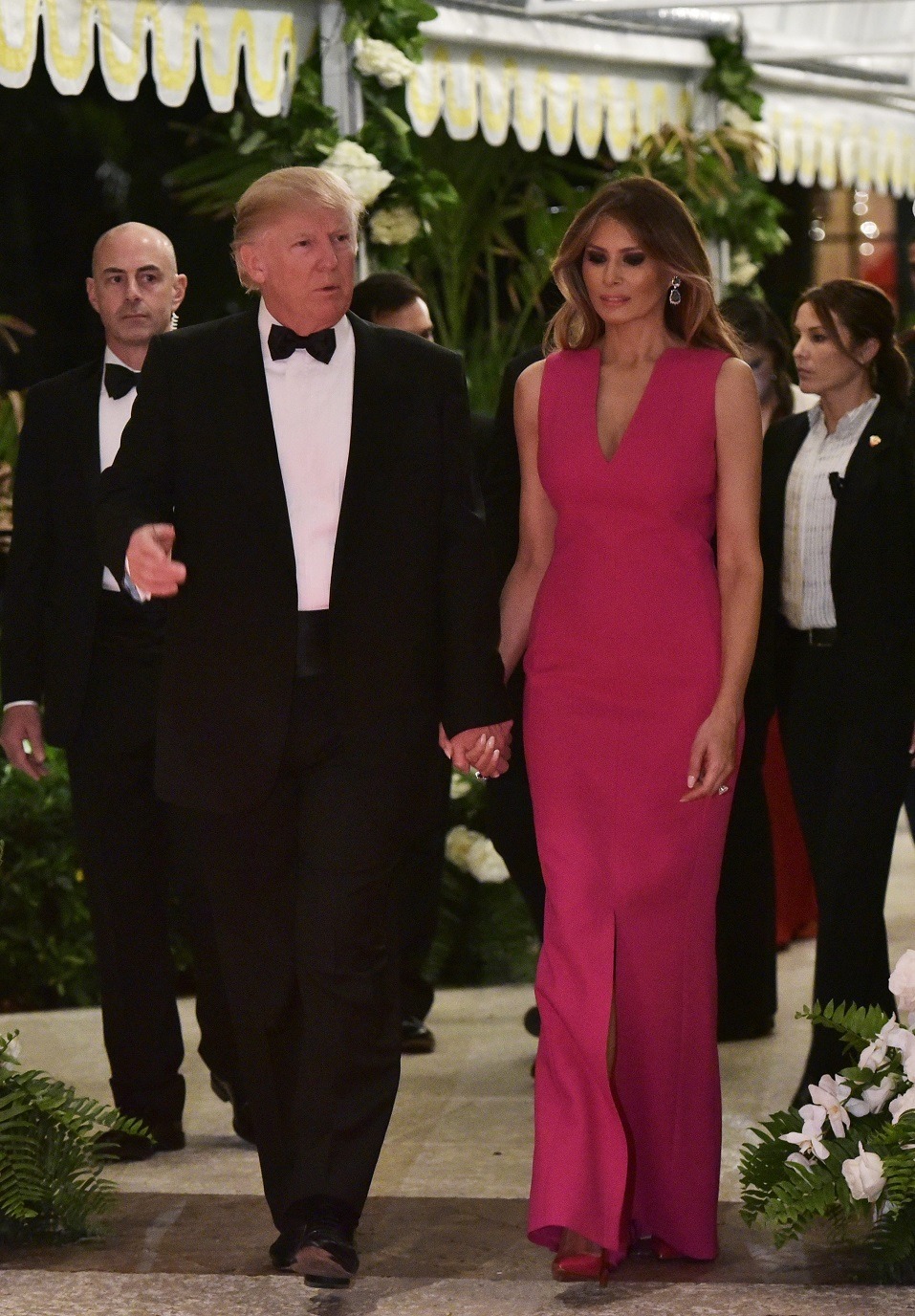 Trump clearly can carry off a range of saturated shades, and hot pink is included in that list of colors that suit her stunningly — as demonstrated in this gown she wore for the 60th Annual Red Cross Gala in Palm Beach, Florida on February 4, 2017. While it is minimalist in design, the dress has all the hallmarks of her classic style, with a subtly seductive allure in the V-neckline and front slit, with a high dose of glamour via the striking aquamarine earrings that lit up the look even more. 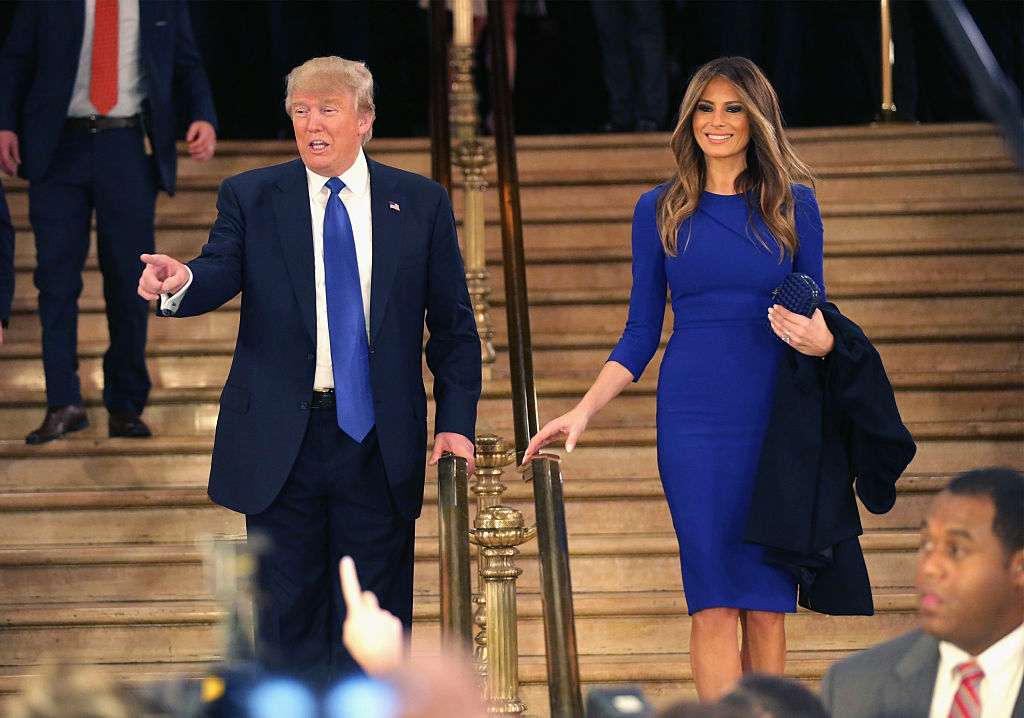 Putting any notion of political colors aside, Trump donned a vivid blue sheath dress at a Fox News-hosted Republican debate on March 3, 2016. Although it was minimal in form, it had maximum impact by virtue of its hue. 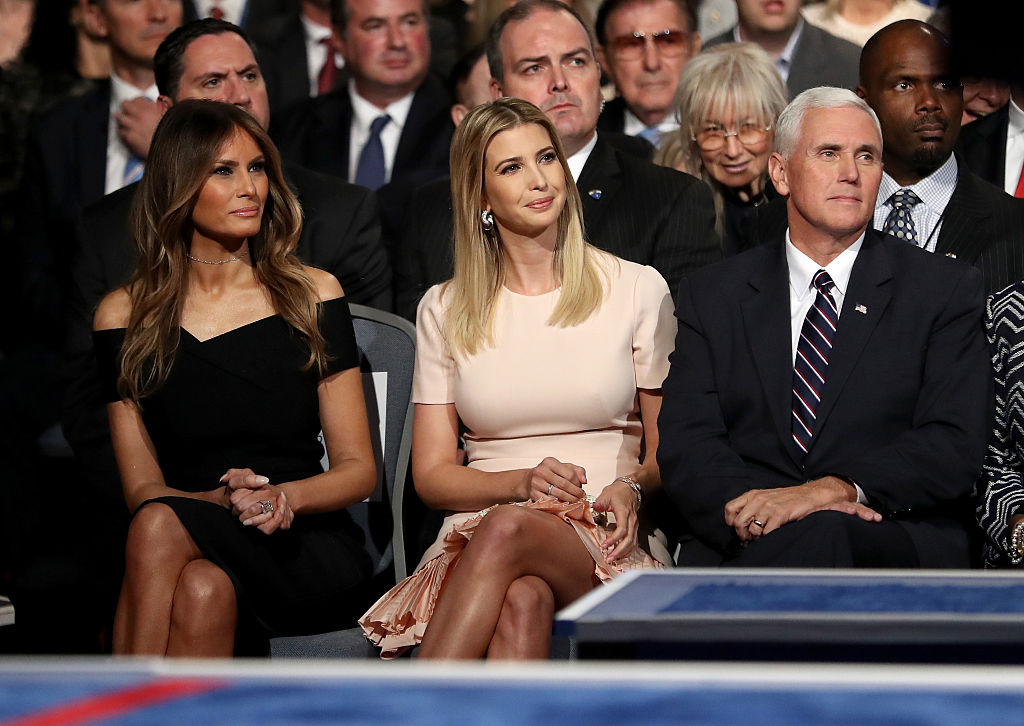 Trump went with black, but this look was anything but boring. | Joe Raedle/Getty Images

At the first presidential debate in New York on September 26, 2016, the First Lady channeled the power of a girl’s best fashion friend — the LBD, this one by Roland Mouret. The little black dress need not be complicated when it has the striking lines of an asymmetrical, off-the-shoulder neckline and precise fit. She was the picture of chic sophistication with this look. 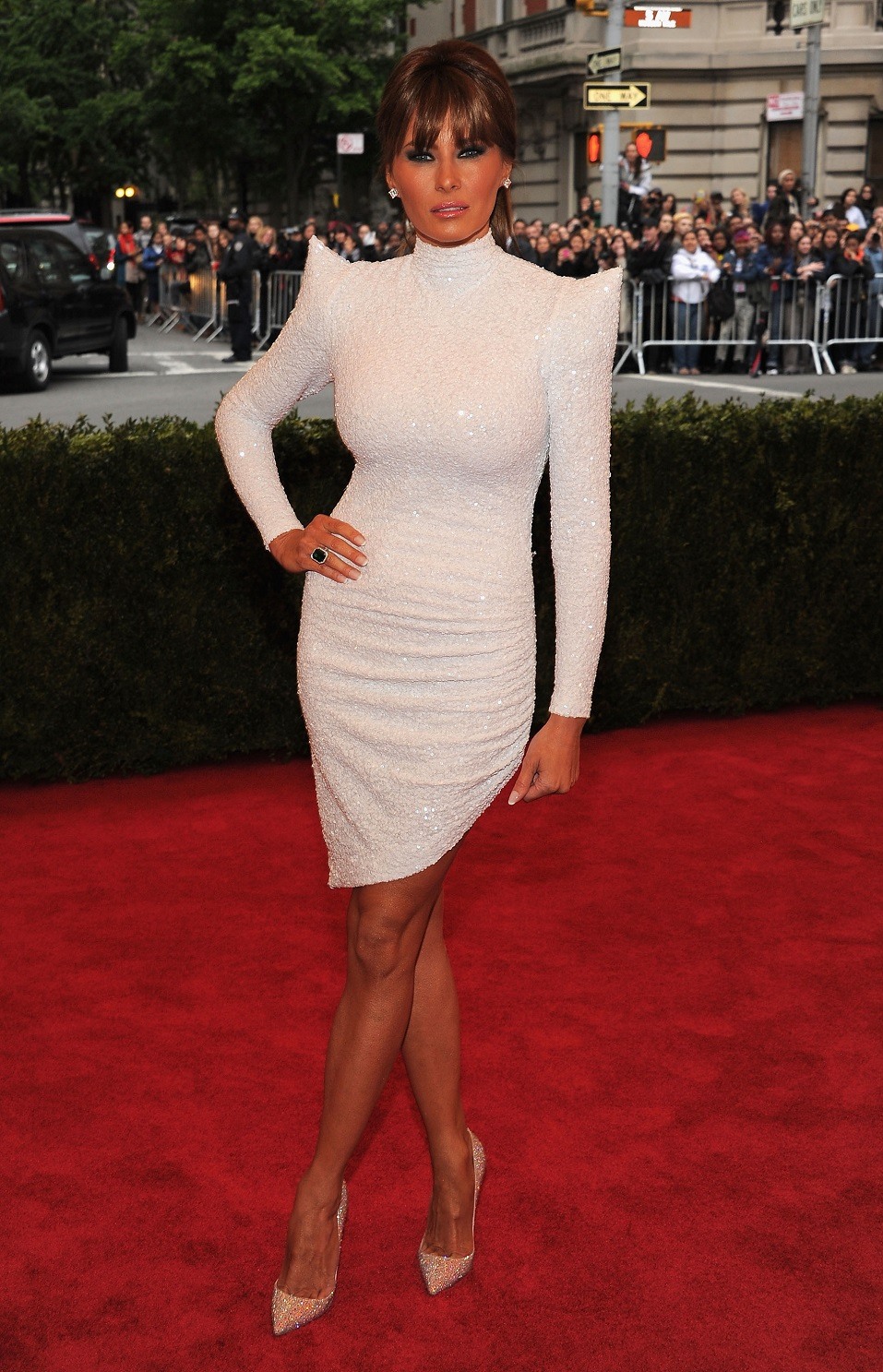 Long before there were any presidential debates featuring the Donald, he and Melania attended the Metropolitan Museum of Art’s Costume Institute Gala celebrating the opening of the Schiaparelli and Prada: Impossible Conversations exhibition. The Met Gala is the Oscars of fashion, so naturally, she dressed for the occasion and the whimsical theme. Donning a Marc Bouwer Couture design, the glittering white creation had all the sophisticated appeal for which she is known for, mixed with a quirky edge in the sculpted shoulders. It created nothing short of a very memorable Star Trek-goes-vogue moment.