Let’s be honest: One of the best things about award shows are the red carpet looks. Especially on Oscar night when Hollywood’s elite pull out all the stops. As one of the most star-studded — not to mention: important — nights in the entertainment industry, A-listers know that the Academy Awards are their time to shine.

Ahead, we take a look at some of the best Academy Awards red carpet looks, plus other memorable ensembles from award seasons past. 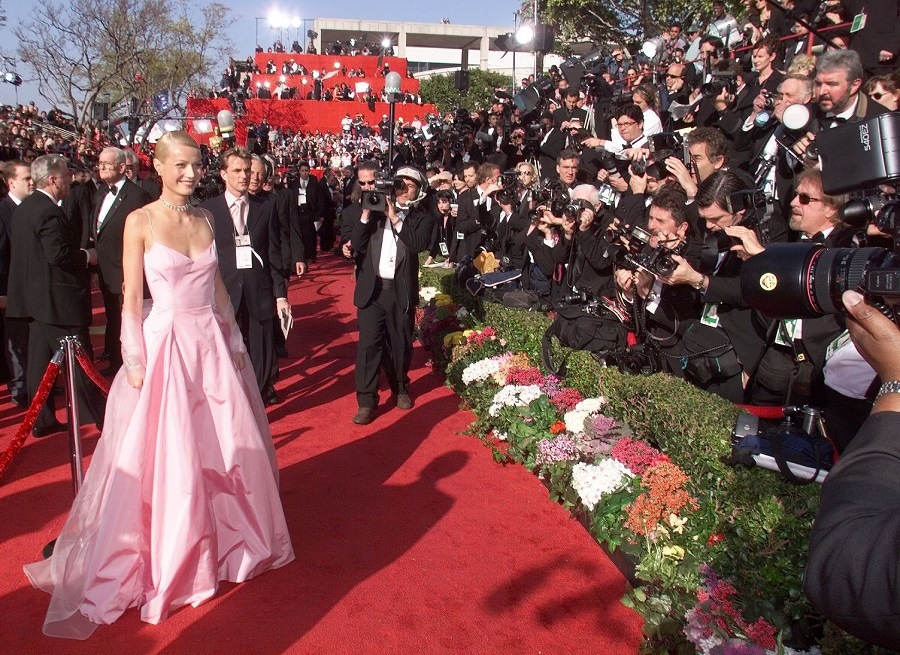 She went millennial pink before it was trendy. | Vince Bucci/AFP/Getty Images

Gwyneth Paltrow may not grace the Oscars red carpet anymore — she’s now focused on running her wellness empire, Goop — but she was once one of the best dressed attendees. Case in point: This memorable millennial pink gown she wore to the 71st Annual Academy Awards in 1999.

Next: Kate Winslet’s heart will go on for this red carpet look.

She looked royal in this emerald gown. | Vince Bucci/AFP/Getty Images

Looking like Oscar royalty, Kate Winslet stepped out on the 1998 Academy Awards red carpet in a stunning emerald green and gold Alexander McQueen gown. And, although she didn’t end up winning best actress for her role in Titanic, she still looked like a winner in our eyes.

Next: Tacky is also memorable. 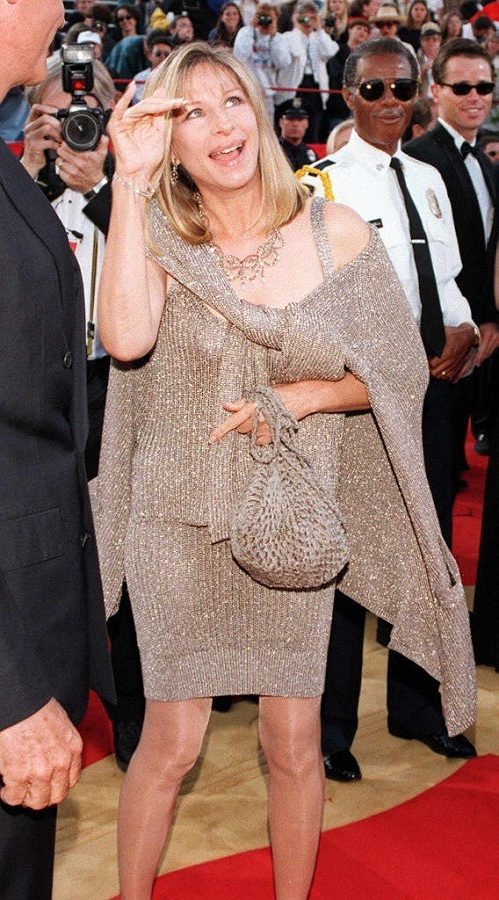 When it comes to award shows — yes, even the Oscars — many celebrities like to go big or go home. Case in point: In 1997, Barbra Streisand graced the 69th Annual Academy Awards red carpet in a fully knit ensemble. We would expect nothing less from the legendary singer.

Next: We can always count on Cher to spice things up. 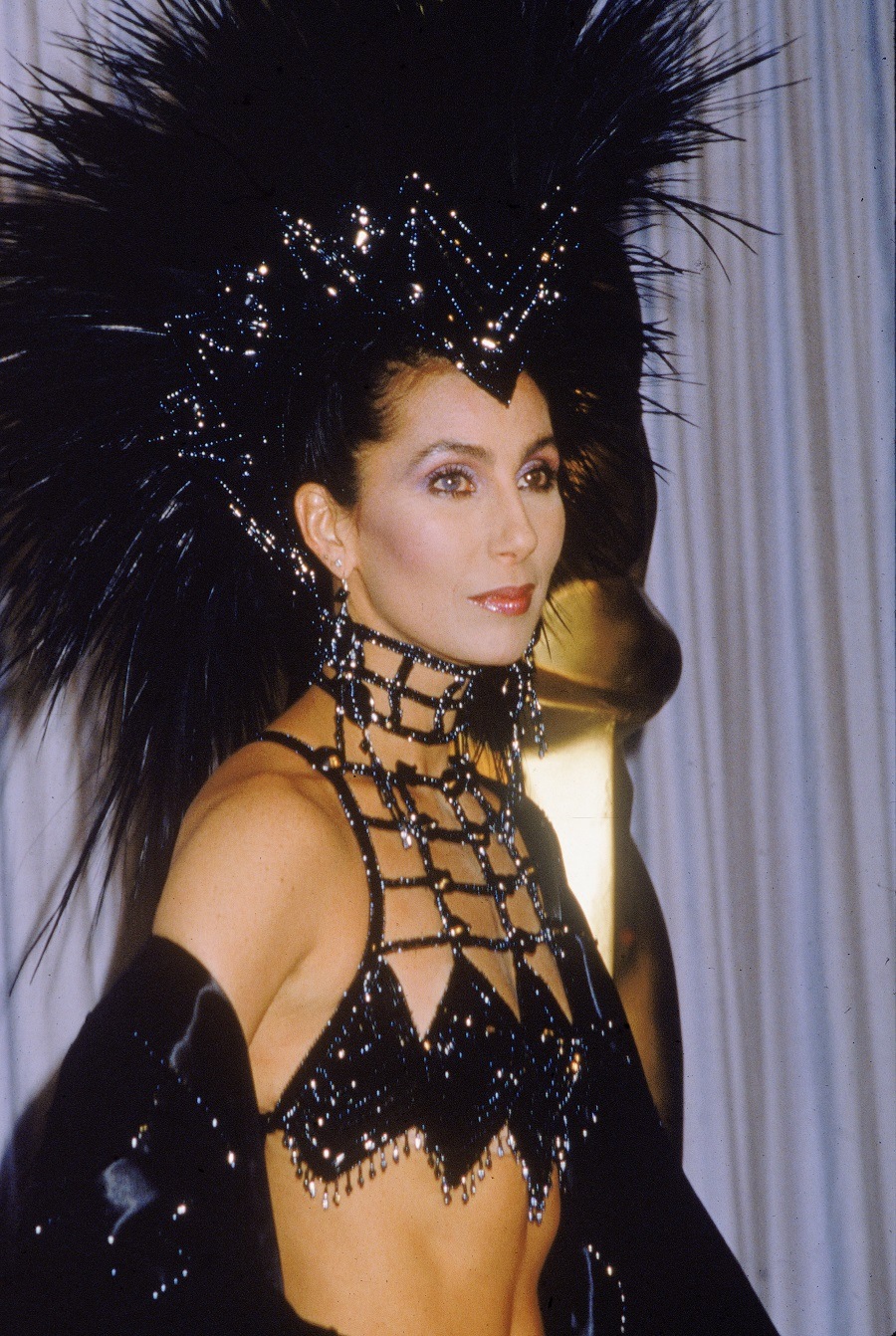 This look was more appropriate for a performance than a red carpet. | Hulton Archive/Getty Images

There’s no doubt Cher has made some interesting red carpet choices over the years and her 1986 Academy Awards look is no exception. The famous singer graced the Oscars carpet in a revealing black ensemble with an intricately designed headpiece. She looked more like she was on her way to perform in a Vegas club than the industry’s most glamorous award show.

Next: This Oscars gown was an internet sensation. 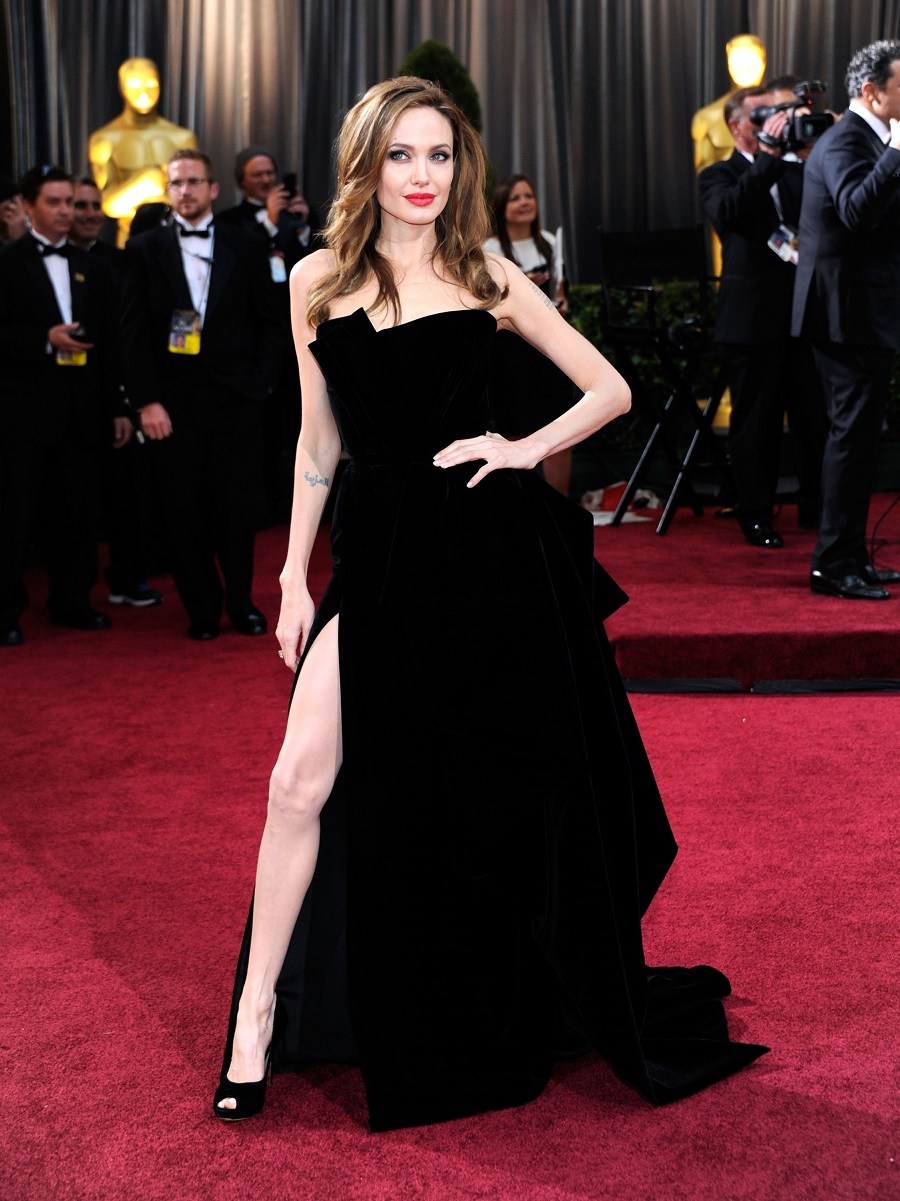 Her right leg got all the attention. | Ethan Miller/Getty Images

At first glance, Angelina Jolie’s black 84th Annual Academy Awards gown looks very simple. But, look again and you’ll notice something the internet went crazy over: The revealing slit. For whatever reason, the internet got a kick out of her right leg and turned it into one of the biggest, most memorable Oscars jokes.

Next: An Erin Brockovich-approved Oscars gown. 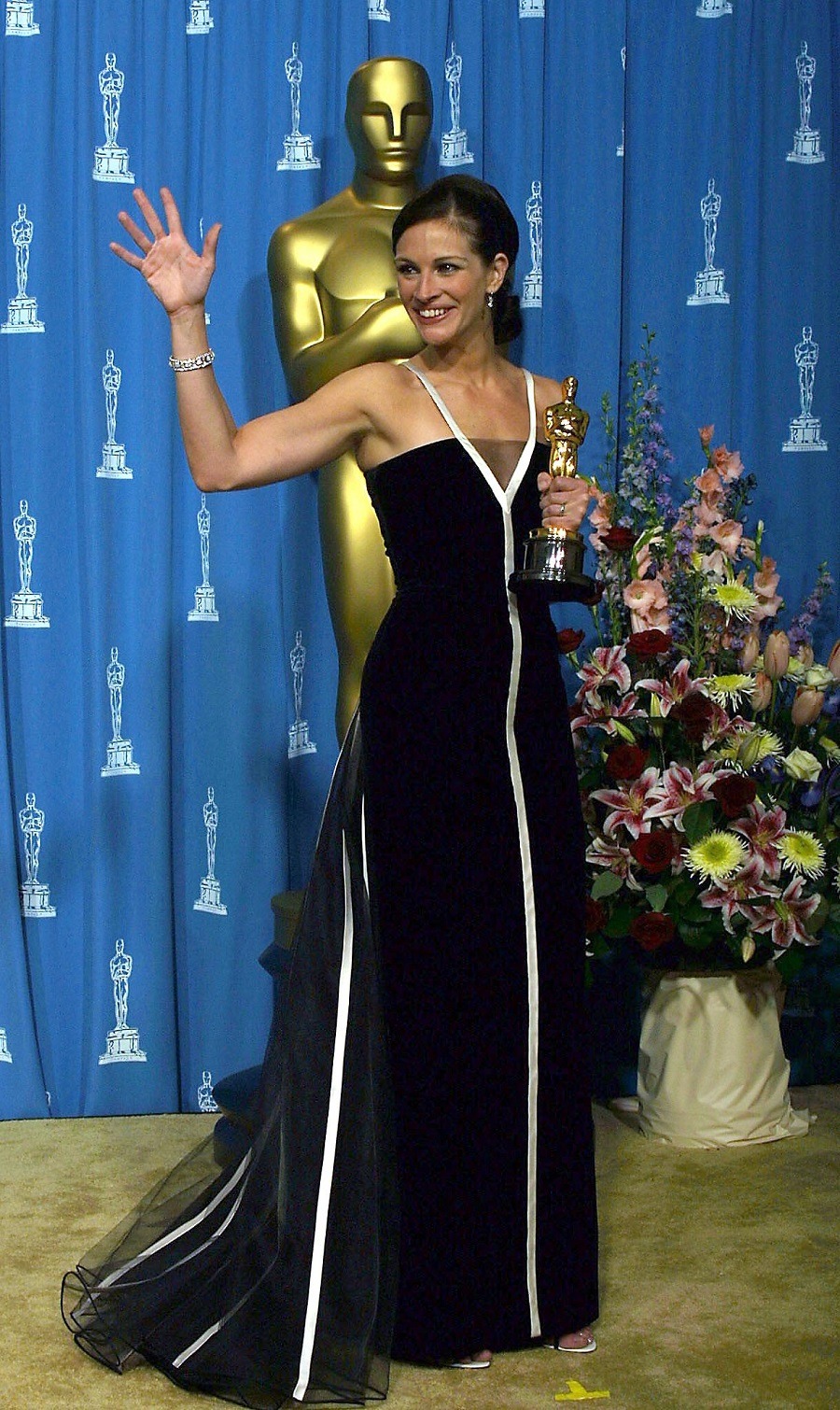 She certainly was a pretty woman in this Valentino dress. | Lee Celano/AFP/Getty Images

Another memorable red carpet look from the Oscars? The black and white Valentino dress Julia Roberts wore to the 73rd Annual Academy Awards in 2001. The timeless look featured a trendy sheer neckline, chiffon train, and flattering white stripe down the center.

Next: The most memorable Oscars dress of all time. 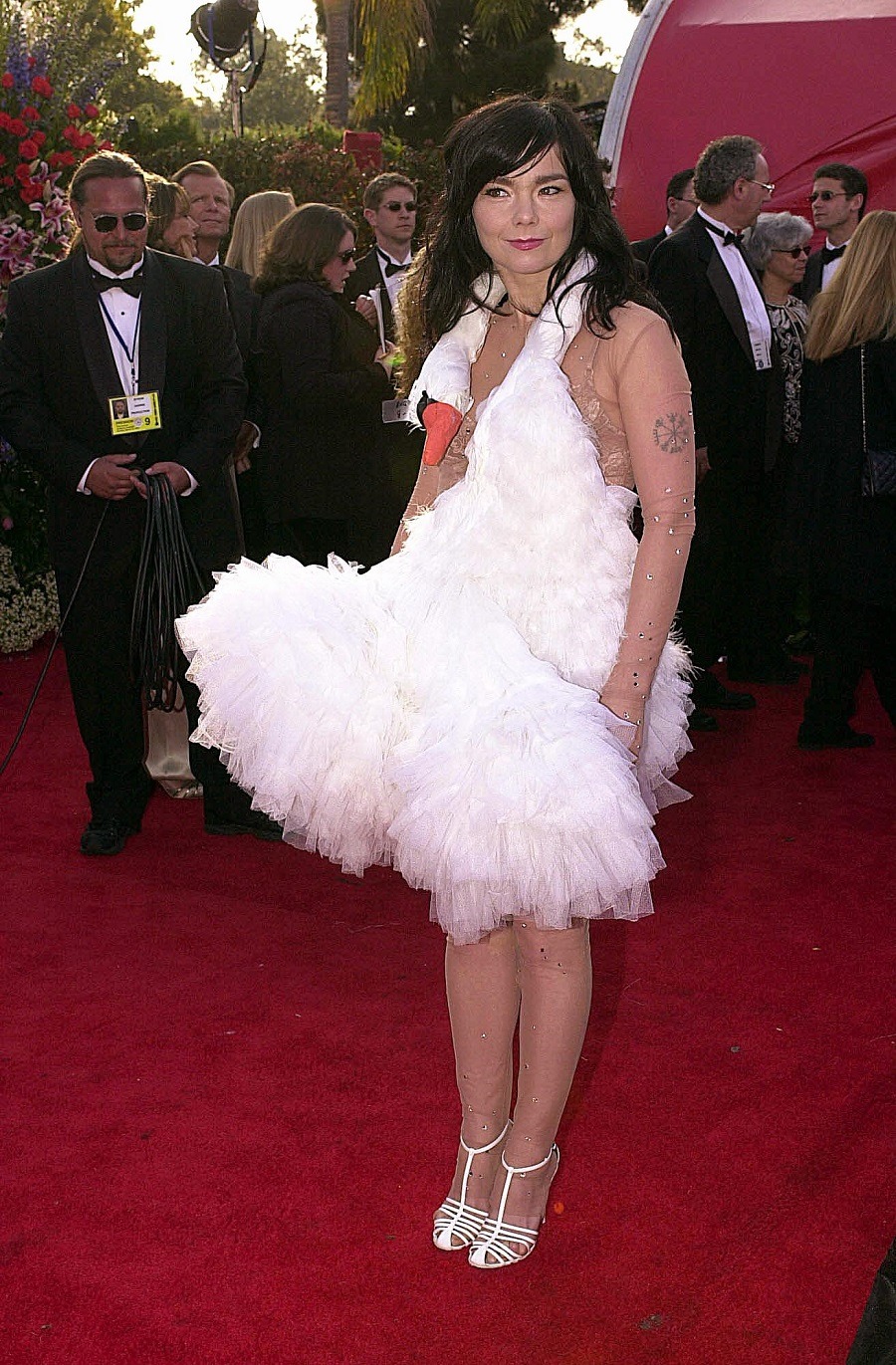 Who can forget the swan dress? | Lucy Nicholson/AFP/Getty Images

Who could forget Bjork’s swan dress from the 73rd Annual Academy Awards in 2001? At the time, the feathered dress was widely criticized and named the year’s biggest fashion faux pas. But, since then, the iconic dress has been referenced in everything from popular television shows to Halloween costumes on Pinterest.

Next: This actress has been known to push fashion boundaries on the red carpet. 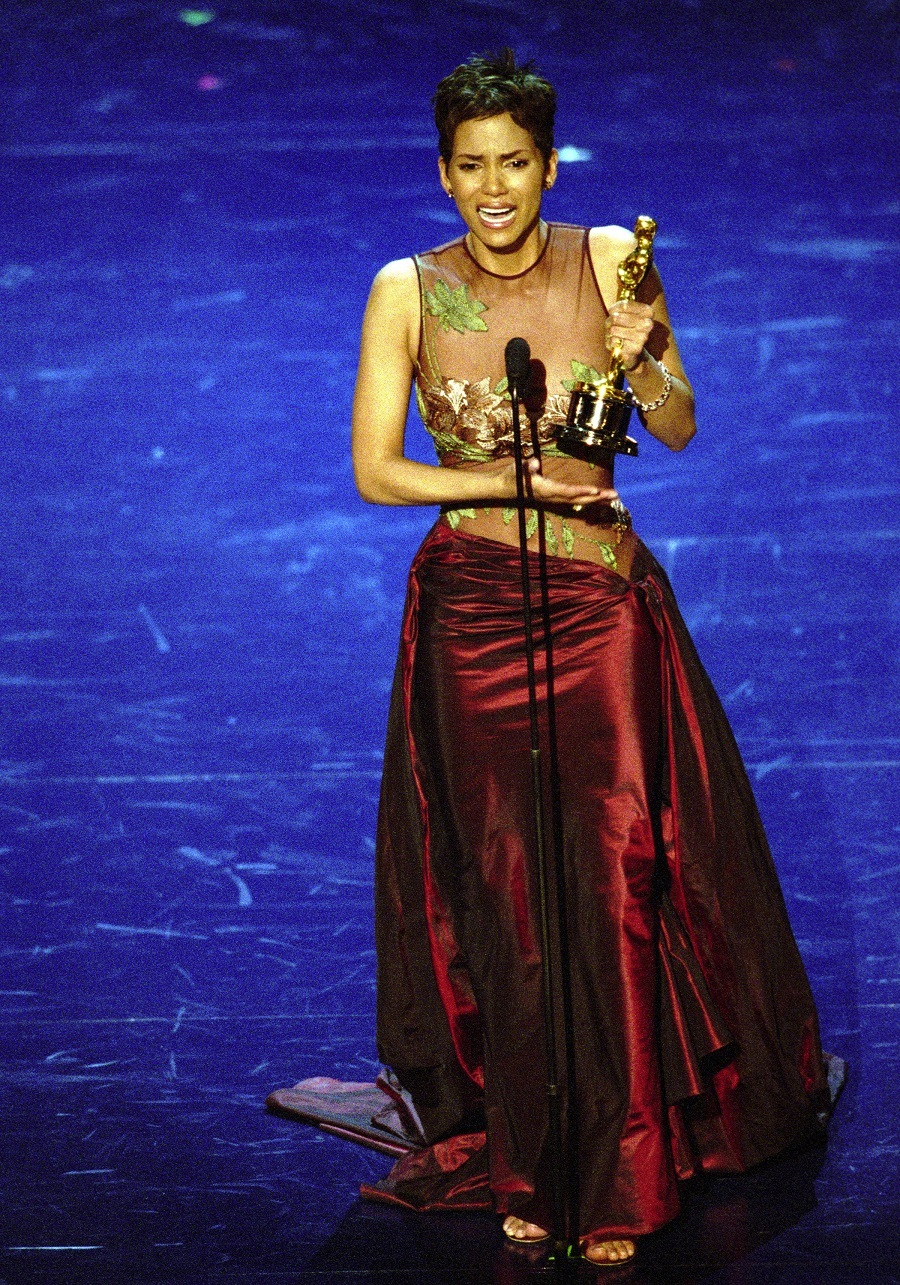 This iconic gown was perfect for the early 2000s. | Staff/Getty Images

Another memorable red carpet look from the Oscars? The revealing maroon gown Halle Berry wore to the 74th Annual Academy Awards in 2002. We love this iconic look because it’s not only a great representation of Berry’s red carpet fashion, but it epitomizes the early 2000s, too.

Next: We don’t even want to know how bad this dress smelled. 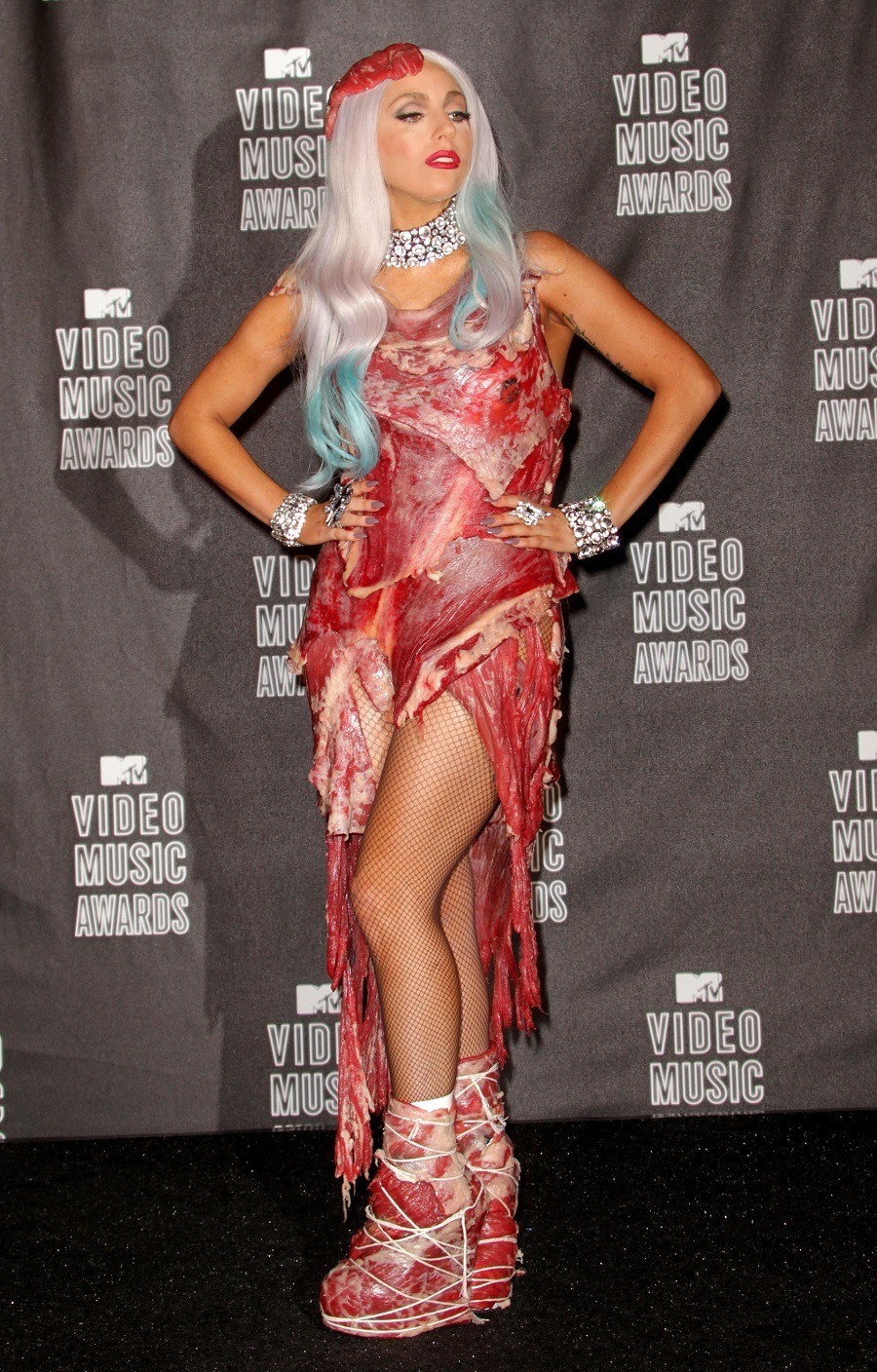 Lady Gaga has worn some questionable things on the red carpet. But, perhaps the most bizarre (and memorable) ensemble was the meat dress she wore to the MTV Video Music Awards in 2010. Made of real meat — we repeat: REAL meat — the dress was designed by Franc Fernandez and named the top fashion statement of 2010 by Time.

Next: Believe it or not, this red carpet look is more famous than Lady Gaga’s meat dress. 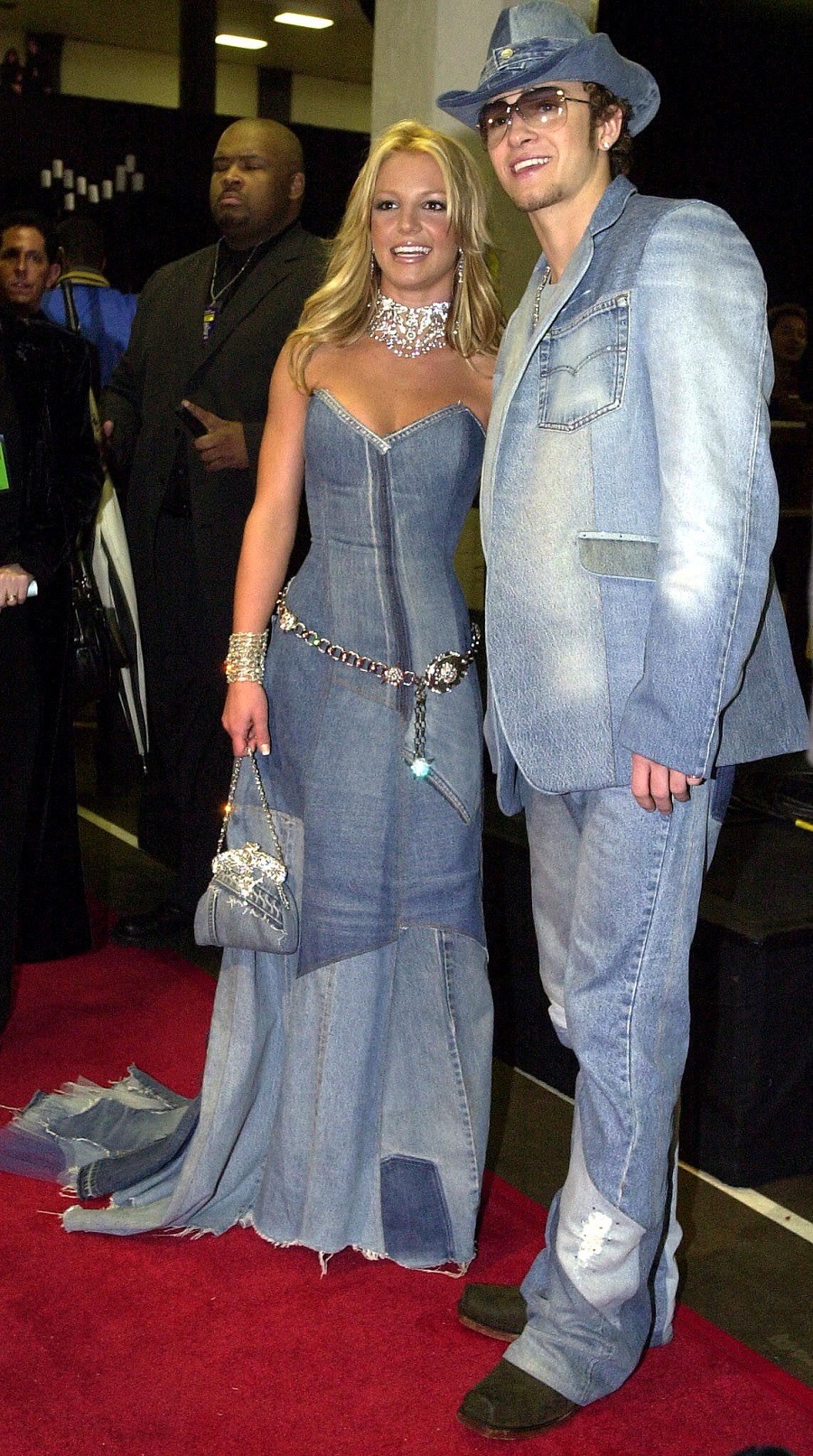 Another memorable award show look? Britney Spears and Justin Timberlake’s matching denim outfits at the 28th Annual American Music Awards in 2001. The famous ensembles have been channeled by other celebrities — including, Katy Perry — become popular Halloween couple costumes, and referenced in pop culture on numerous occasions.

Next: A plunging neckline that is unforgettable. 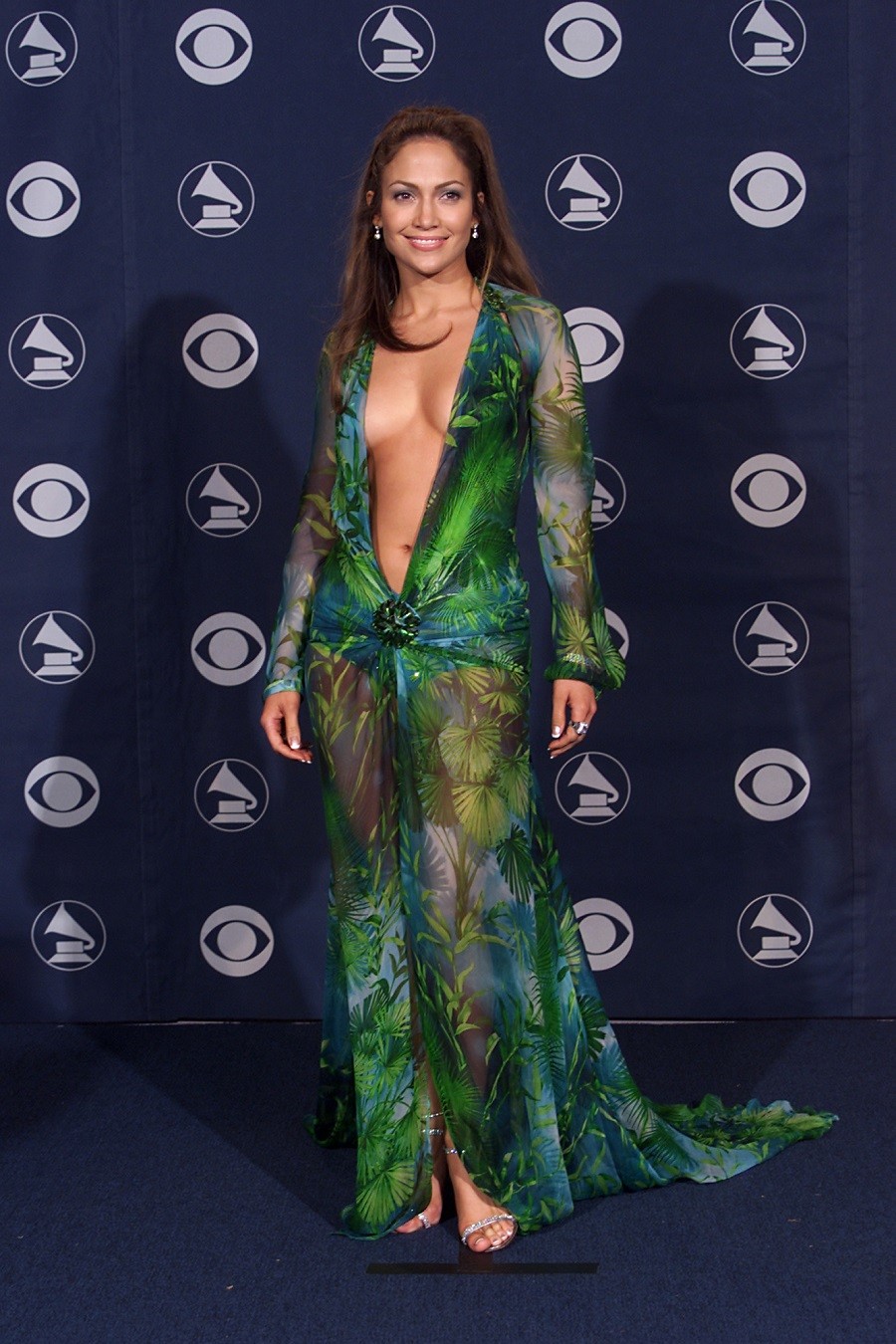 Who could forget the plunging neckline Jennifer Lopez sported at the 42nd Annual Grammy Awards in 2000? While the green Versace dress looks more like it belongs on the beach than the red carpet, its shock factor was an instant hit. And, almost two decades later, it’s still one of the most memorable award show looks.

Next: Some women are dripping with diamonds … 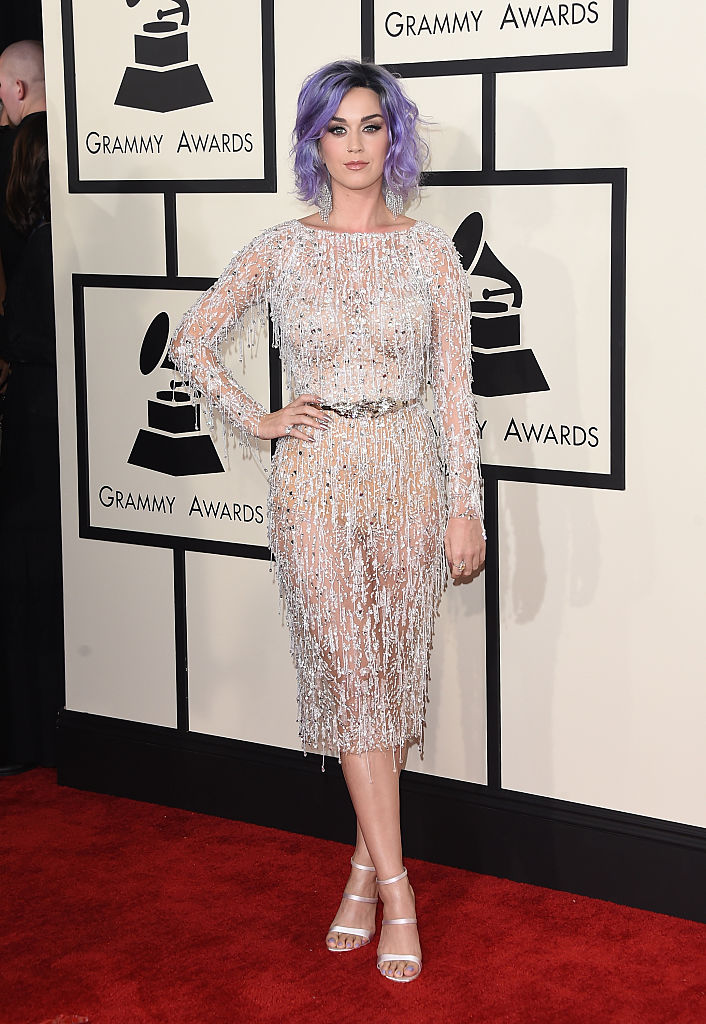 Like Lady Gaga, Katy Perry likes to go big at award shows. That said, she kept it simple for the 57th Annual Grammy Awards in 2015 and it was one of her most memorable looks yet. For this red carpet look, Perry stuck with a sheer bedazzled dress and let her purple hair do the talking.

Next: One of the most revealing red carpet looks ever. 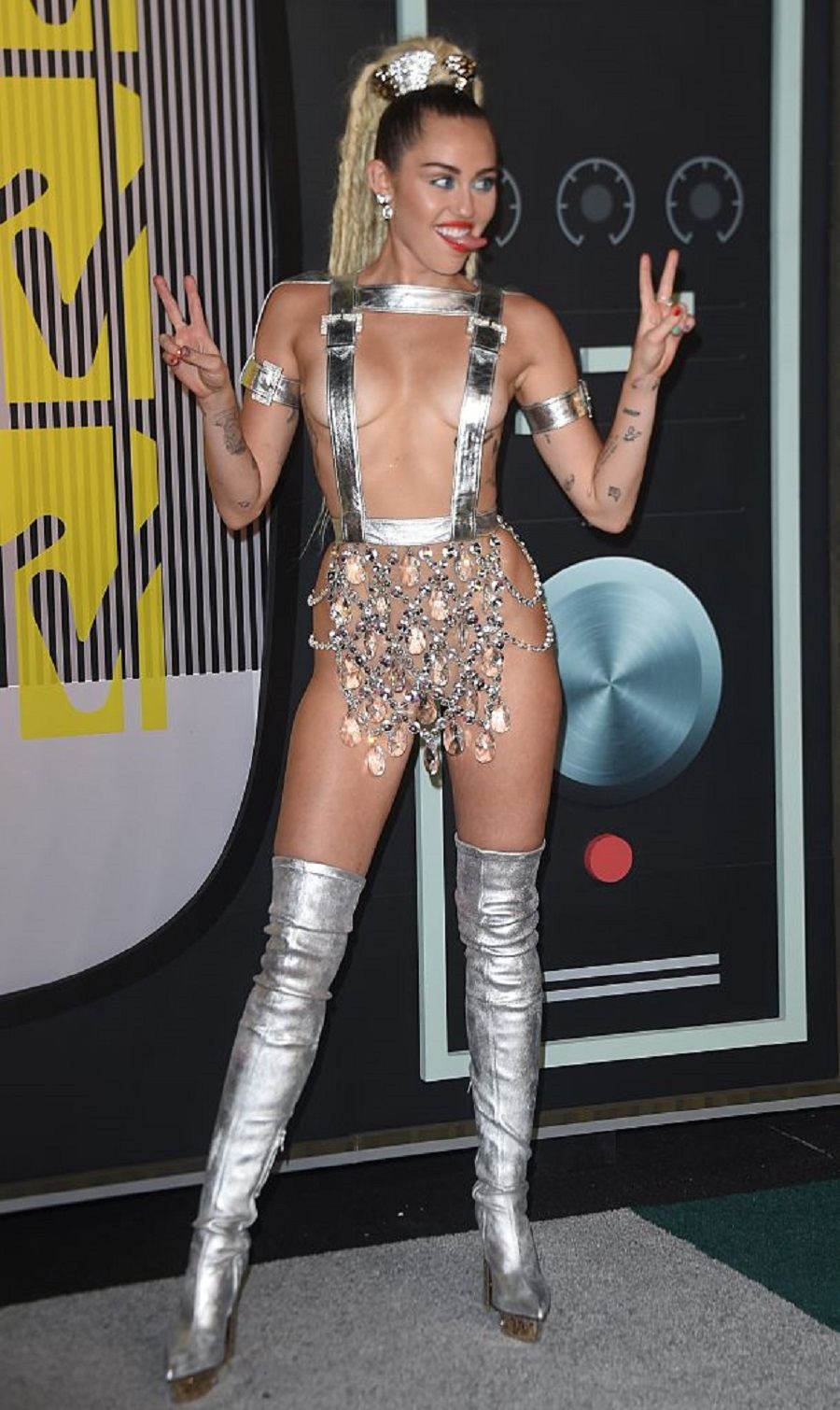 Is this even considered a dress? | Mark Ralston/AFP/Getty Images

On a similar note, Miley Cyrus has worn some crazy things to award shows. Case in point: the revealing chain dress (does it even count as a dress?) she wore on the red carpet at the MTV Video Music Awards in 2015.

The craziest part? It wasn’t the only wacky getup of the night. As the 2015 VMAs host, Cyrus had numerous outfit changes — all of which were crazy and memorable.

Next: Is it just us, or does Tilda Swinton always look like she’s going to Outer Space? 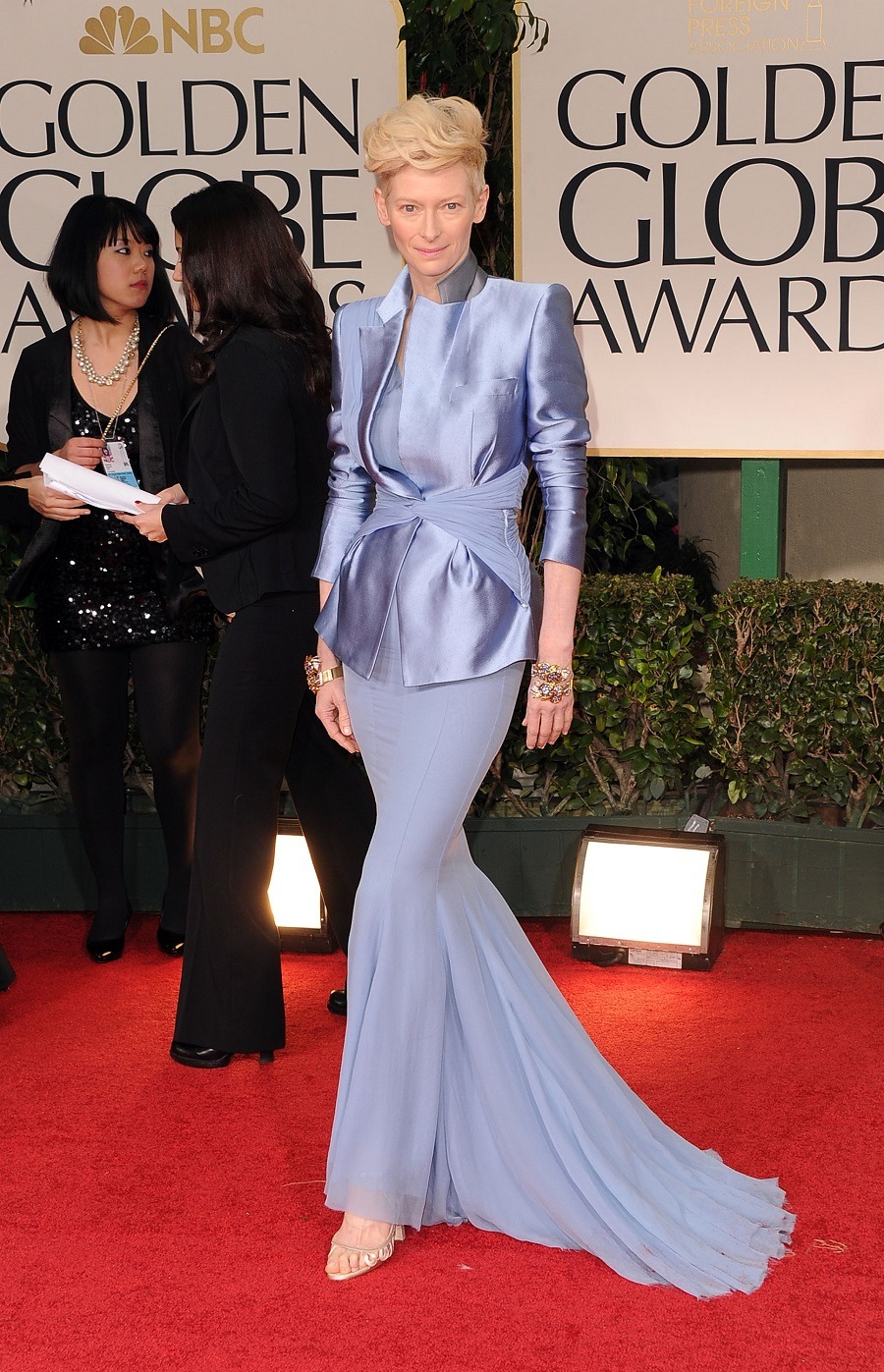 She always seems like she’s traveling back from the future. | Jason Merritt/Getty Images

Whether she’s in a pantsuit or a dress like the one she wore to the 69th Annual Golden Globe Awards in 2012, Tilda Swinton always looks like she’s traveling back from the future. That said, we love the Hunger Games vibes her periwinkle Haider Ackermann gown gives off and it’s definitely one of her most memorable looks to date.

Next: This actress always wows at award shows.

This gown had some Black Panther vibes. | Jeff Spicer/Getty Images

One thing’s for certain: Lupita Nyong’o always brings it on the red carpet. And while it was hard to choose one memorable look, we can’t stop thinking about her 2018 British Academy Film Awards gown. Designed by Elie Saab, the black and gold structured gown gave off some serious Black Panther vibes.