Microsoft’s New Browser: How Does It Compare to Other Browsers? 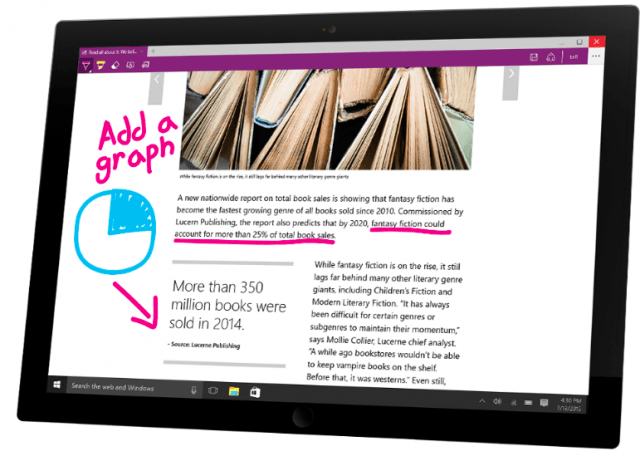 Windows 10 is finally here and steadily rolling out to users, and with it comes Edge, Microsoft’s brand-new web browser. It’s notable that Microsoft is pushing a new browser that isn’t Internet Explorer. But can Edge finally kill Internet Explorer? And can it catch Microsoft up with the other major web browsers that offer users a better browsing experience?

Lauren Goode reports for Re/Code that in many ways, Edge simply catches up to other browsers. She says that “some of the new front-end features won’t blow your laptop open.” During her week using Edge, Goode also encountered “significant” bugs in the new browser.

Edge runs on EdgeHTML, a forked version of Trident, the web layout engine behind Internet Explorer. Microsoft stripped out the code used in older versions of the browser, and rewrote the majority of the original source code. The result is a rendering engine that enables better performance and better support for modern web standards. Microsoft’s Cortana digital assistant is, in Goode’s estimation, the most useful new feature of Edge. Web Note, by contrast, frequently crashed the browser, and Goode says that even once it started working better, she “didn’t actually find writing on a Web page to be way more useful than sending a Web link with some notes or comments attached to the message.” The Reading List duplicates functionality found in other browsers and apps.

Edge doesn’t yet support browser extensions, though Microsoft has said that later this year, extensions built for other modern browsers using common tech like JavaScript and HTML will work with Edge, with little or no code changes necessary. Edge offers the usual privacy and security safeguards, such as the ability to block cookies, private browsing, a Do Not Track tab, and protection from malicious sites and downloads with a SmartScreen filter.

Brett Howse completed some early benchmark tests for AnandTech, and found that Edge is “right up there with the rest of the browsers in terms of performance. It is quicker in some workloads, and slower in others, but generally performance should not be an issue.” Howse found that not only is Edge faster than Internet Explorer, but that by some benchmarks, Edge is faster than Google Chrome, Mozilla Firefox, and Apple’s Safari.

Howse also compared Edge’s performance to the performance of the browser when it was still called Project Spartan, in January, and found that Edge outperformed Spartan across the board. While Edge “still falls behind in the HTML5 test, but it has made big improvements there as well.” Howse notes, “It is great to see Microsoft focusing on browser performance again, and especially not sitting idle since January, since the competition in this space has not been idle either.”

Raymond Wong ran a series of benchmark tests for Mashable, investigating whether Microsoft’s new browser is as fast as, or at least a good match for, Google Chrome. On the Futuremark Peacekeeper, a JavaScript benchmark, “Chrome smokes Edge in speed and overall performance.” On SunSpider, another JavaScript benchmark, Edge beats Chrome, and on the V8 Benchmark Suite Version 7, Chrome “comes out on top, but not by much.” In real-world tests conducted loading popular websites, Chrome barely beats Edge.

Wong explains of the results, “Google Chrome is faster than Microsoft Edge, but…only if you don’t have any extras like extensions installed. When you add those in, Chrome slows down to a crawl.” While he characterizes Edge as “a very capable browser,” he notes that “extensions are coming to Edge and that could — and almost certainly will — slow its performance down, but right now it’s nothing but a great start for Windows 10.”

Martin Brinkmann at Ghacks ran his own series of benchmarks, comparing Edge to Chrome, Firefox, and even an assortment of other browsers. On the Apple JetStream and the SunSpider, Edge came out on top. On the Google Octane and Mozilla Kraken, Chrome emerged the winner. And on the PeaceKeeper and WebXPRT, Firefox performed the best. But is Edge the fastest browser you can use on Windows 10? Brinkmann explains, “The results leave little doubt that Microsoft has improved the performance of the default Windows browser by a lot but since Edge is not beating all browsers in all benchmarks, it cannot be said that it is the fastest browser on Windows 10.”

Internet Explorer isn’t going anywhere for the users who still need it. Internet Explorer 11 is still available on Windows 10, and it can even be set as the default browser. Microsoft also plans to continue tech support and security updates for Internet Explorer 11. But for most users, IE is no longer necessary. Emil Protalinski reports for The Verge that as Internet Explorer turns 20 years old, “it’s about time that Microsoft shoved it aside.” Despite Chrome and Firefox’s gains, Internet Explorer still dominates in terms of browser market share, mainly due to the fact that IE is king on desktop.

While Protalinski acknowledges that Edge gives Chrome and Firefox a run for their money, he reports that Edge is still lacking in many areas, at least temporarily. “For now,” Protalinski explains, “Edge is a powerful browser clearly not meant for power users,” referring especially to the absence of extensions. “Edge is fast, but we can’t say it’s the fastest,” he points out, but adds that since Microsoft plans to update Edge more often than Internet Explorer, and because Chrome and Firefox see new versions every six weeks or so, the winners could change as each new version is released.

Because Microsoft isn’t porting Edge to older versions of Windows, and is, instead, pushing users to switch to Windows 10, Edge can fully rely on what Windows has to offer. That enables Edge to be the same app across phones, tablets, laptops, and desktops — new territory for Microsoft.