With major flagship phones from big manufacturers coming out like clockwork every year, there’s always an impressively spec’d phone to buy, but they all have trouble surprising us. Most just have upgraded hardware, updated software, and cameras better than the previous year’s. Sometimes the design sees a change, and now and then there’s a storage increase. But hardly do we see anything that feels revolutionary. The Project Ara phone seemed like it was going to do the job until Google pulled the plug on it, but Motorola has come with a suite of phones under the Moto Z branding that try to do something different.

Motorola has done a nice job styling its phones. The budget-friendly Moto G phones have a decent look to them, and bumping up to the premium category, the Moto Z  models all have their fair bit of flare. Glass covers the front and back of the phone, with a metal frame around the edge. The different models all look and feel high quality. 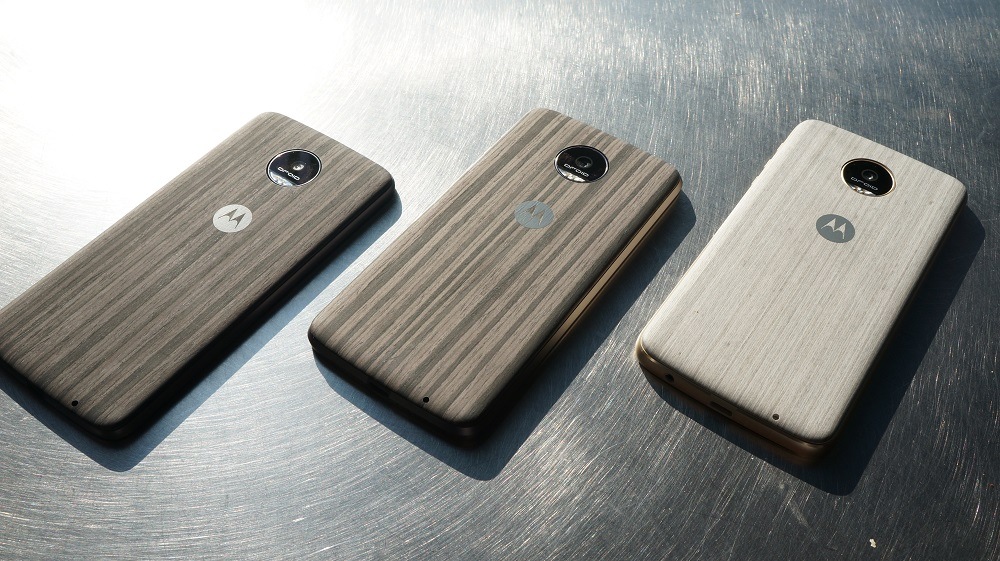 The optional style mods that magnetically attach to the back of the phone can enhance the appeal of these phones, adding a nice wooden touch and making the camera bump level with the back of the phone. The downside is that they add considerable thickness to the handset. The glass backs also look fairly nice without the covers, and the white model had a nice concentric circle pattern on the back that was more flattering than the horizontal stripes on the black models, but to each their own. Adding a lit bit more flair, the gold coloring of the Moto Mods connector adds a nice bit of flash, especially on the white model. 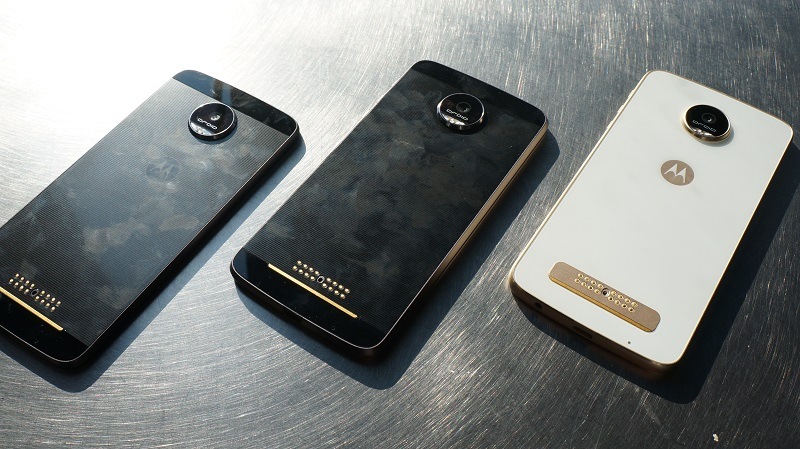 The phones are all built well. The metal edge is solid, and none of them felt flimsy. Though the standard model is a bit thinner than the Moto Z Play Droid and Moto Z Force Droid models, it felt equally robust. Unfortunately, these phones aren’t going to be so great if they hit the ground very hard. Having glass on both the back and front make for more shatter opportunities. The aforementioned style mods can help protect the back, but the metal edge doesn’t come up above the level of the screen, so it’s not going to protect from a flat fall onto the face of the phone. The Moto Z Force Droid does come with Motorola’s patented Shattershield, but I don’t think Motorola would have been happy with me shatter-testing its review unit.

All of the phones feature 5.5-inch AMOLED displays, with the Play models at 1080p and the other models at QHD (1440p). No surprises here — they looked great, though were hard to navigate with one hand. Motorola keeps winning my approval when it comes to storage, as all three phones I tested included expandable storage with Micro SD card slots. Options of 32GB and 64GB should be enough for apps, and all music, video, and photography can get dumped onto the Micro SD. With a 5MP selfie camera on all models, 4K video recording, and main cameras ranging from 13MP to 21MP (on the Force model), that extra storage potential will undoubtedly come in handy.

USB-C connectors on all the phones point toward the future but also mean old USB cables aren’t going to be worth much. Thankfully, those USB ports are ready for TurboPower charging, which is great for a quick boost to the already large battery (2600mAh on the Moto Z, a whopping 3510mAh on the Moto Z Play Droid, and 3500mAh on the Moto Z Force Droid).

A downside of the build is that only the Moto Z Play Droid has a standard 3.5mm headphone jack, whereas the other two models have a USB-C adapter included. Fortunately the speakers on the phone are great, so if you’re just trying to hear something and don’t mind others hearing it, you should be fine.

The Moto Z models have slightly varying specs, with the Play model featuring a 1080p screen and Snapdragon 625 chipset with 3GB of RAM compared to the other models’ 1440p screen, Snapdragon 820 chipset, and 4GB of RAM. I found them to perform very similarly in general use, with app load times (including large games) about the same, and all-around smooth performance. The upgrade to Android 7.0 didn’t seem to have an impact on performance, and the Moto Z Play Droid running the early Android operating system still ran just as smoothly as the other phones.

The cameras were decent, with the Moto Z Force Droid’s 21MP camera taking the cake. The extra detail captured beat the photos taken on the other phones — even the photos taken with the Hasselblad camera mod didn’t seem to beat it (more on that later). For a close look at how these cameras perform, check out this Moto Z camera comparison here. The 5MP selfie cameras on all of the phones were nice and will make you want to look your best because of how much detail they capture.

The fingerprint scanners worked quickly and made unlocking the phones a much simpler process than a code, though you’d likely want to program a few different fingers into the phone.

Moto Z with the Hasselblad camera mod — yes, the phone is under there | Mark Knapp/The Cheat Sheet

The Moto Z line’s ability to connect to special modifiers that enhance or add functionality is their key selling point and claim to fame. No one is going to turn away from their favorite Apple or Samsung phones unless there’s a compelling reason to, and that’s what Motorola shot for here.

LG also tried a modular phone like this, but Motorola’s implementation seems better. Mods simply snap onto the back of the phones magnetically and don’t require removing the battery or rebooting the phone every time you want to attach or detach them.

TUMI battery mod: This straightforward mod adds significant battery life to the phone, which can make the Moto Z a contender and drive the Play and Force models into insane power-on times.

JBL speaker mod: If the Moto Z phones weren’t already loud enough with their built-in speakers, this mod can turn up the volume considerably. With its own battery, it won’t hog the phone’s power.

Moto Insta-Share Projector: If the 5.5-inch screen isn’t big enough, this snap-on projector can make the screen a whole lot bigger, allowing you to watch movies or share your screen with others easily.

Hasselblad True Zoom: This mod adds a new camera sensor to the phone, a large xenon flash, and 10x optical zoom — a must for any long-distance shooting.

These mods all offer nifty, nearly seamless ways to expand the capabilities of the phones. But they aren’t perfect, and the proprietary connection means you won’t be sharing with your friends unless they also have a Moto Z, nor will you be bringing them to future devices unless Motorola wholeheartedly commits to this modularity.

It’s sad to say — because the idea of these phones is awesome, especially with the sad cancellation of Project Ara — but the Moto Z won’t make a terribly compelling buy for most people. The Moto Z Play Droid did offer good performance and a long battery life for a reduced price, but it’s still around $400, which forces it into competition with the likes of the OnePlus 3T, which is a killer phone by all accounts. The other phones jump up into the flagship price ballpark of $620 to $720. Are they good phones? Yes. But not necessarily good enough to lure people away from the tried and true dominant flagships from Apple and Samsung.

The Moto Mods are a nice feature, but not a killer feature. The Hasselblad camera mod is expensive at close to $300, yet didn’t feel like it made a great improvement. That $300 can buy a decent standalone camera that will take up less space, shoot better photos, and not drain the phone’s battery. (I took test photos with the Hasselblad mod and my Sony Nex 5R, which is probably worth about $300 these days, and included those in the camera comparison. Let’s just say I wouldn’t replace the Sony with the Hasselblad.) Plus, there was serious latency between camera movements and them displaying on the screen. The speaker mod was nice, but a simple bluetooth speaker can get the same job done. The projector mod was great to use, but at $300 it’s in the same ballpark as other pocket-friendly pico projectors that will beat it for functionality. Finally, the battery mod is nice and all, but other phone case makers have figured out how to do this kind of thing for plenty of phones.

The biggest issue with the Moto Mods is that they only work with Moto Z phones. If you’re friend wants to play you some music, they can’t connect to your speaker mod. If you want to project content from your computer or another device, sorry. The Hasselblad won’t do much good if your phone is dead. And a normal battery pack will let you help a friend out if your own battery is doing just fine.

Now, there may be a very particular type of person out there that wants to center everything around their phone. In that case, being able to expand the capabilities of that phone is ideal. And that person will win out if Motorola keeps the Moto Z line going for years to come. But for most people, picking out a good phone for the phone’s sake and then getting all the extra tech they want separately will be the best route. That may still mean getting a Moto Z, as they’re good phones, all things aside. But if a more powerful phone is available at the same price, the Moto Mods aren’t a good enough reason to choose the Moto Z.

See more details on the varying specs of each phone model here.