9 New Phones That Already Have Us Excited About 2017

Thinking of buying a new smartphone in 2017? These are the phones that already have us excited about the devices coming this year | iStock.com/AntonioGuillem

Late in 2016, we already were excited about the new phones manufacturers would launch in 2017. We’re always excited for new phones. But the devices coming in 2017 promised to make the smartphone industry a little more interesting again.

Despite all their impressive specs and features, smartphones have gotten a little boring. Phones with the best components and the latest features are continually becoming more affordable and accessible. That’s great if you want an awesome phone and don’t want to spend the equivalent of a month’s rent on it.

But spec sheets for even the highest-end smartphones have become pretty predictable, as have the designs of those phones. In fact, many high-end phones really look alike. Need an easy illustration of the problem? Just have a look at these six phones that look like iPhones.

But in 2017, it’s looking like the smartphone could start to change. New features in both hardware and software are going to make smartphones more interesting and unique. And we’re already starting to see that happen with the new phones that have been introduced this year.

The devices that already have been unveiled make us more optimistic about the rest of the phones launching in 2017. Check out the most exciting devices introduced so far.

The Asus ZenFone AR is one of the most interesting new phones to have launched so far in 2017 | Asus.com

Asus’s ZenFone line has gotten more interesting over the years. The trend has continued in 2017. Asus kicked off a year of new phones at CES 2017. There, it launched the Asus ZenFone AR, the first high-end phone ready not only for Google’s Tango augmented reality technology, but also for the Daydream virtual reality system.

Asus says the ZenFone AR is “built for augmented reality,” and it’s serious. A Snapdragon 821 with 8GB of RAM powers the ZenFone AR. It also has a QHD Super AMOLED screen and a 23-megapixel, rear-facing camera. Extra cameras and sensors enable it to perform motion tracking, area learning, and depth perception for Tango. Plus, it runs Android 7.0 Nougat.

The Changhong H2 is unique among the new phones introduced so far in 2017 in that it’s equipped with a molecular sensor. Dean Takahashi reported for VentureBeat that the phone uses Scio molecular identification technology, which Consumer Physics developed and refined with Analog Devices.

The H2 is the first smartphone to use this kind of identification technology. It relies on spectroscopy sensing and cloud computing to identify objects.

Changhong showed the phone at CES 2017, where it stood out from other phones. It has the ability to tell you which of two apples is sweeter, how many carbs are in a piece of cake, or whether a Viagra pill is real. The device has a 6-inch screen and a 2.0GHz 8-core CPU.

The Honor 6X demonstrates that even if you don’t have a big budget, you’ll be able to choose from some great new phones in 2017 | Hihonor.com

Huawei-owned Honor unveiled the 6X, successor to the 5X, at CES 2017. The device — with the tagline, “Double or nothing” — features dual 12-megapixel and 2-megapixel rear-facing cameras, two-day battery life, and a Huawei-made Kirin 655 octa-core processor.

The wide aperture range of the rear-facing camera system — f/0.95 to f/16 — enables you to decide how much of your photo you want in focus. And the Phase Detection Auto Focus system can focus in just 0.3 seconds, which means you can quickly get exactly the right shot.

Florence Ion reported for Android Central that the Honor 6X sets “the standard for budget phones.” 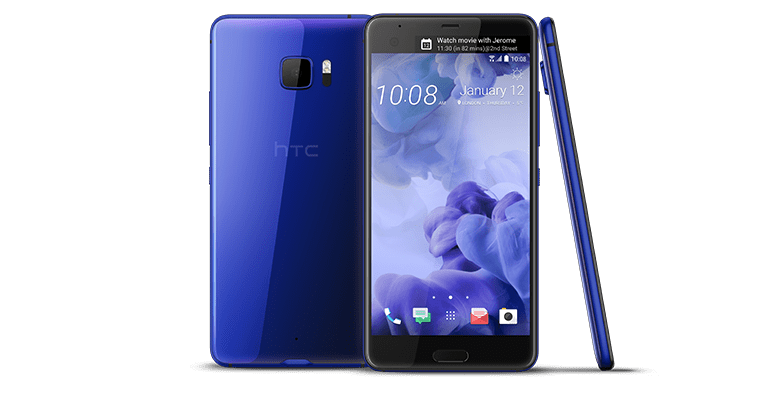 The U Ultra can help put HTC back in the spotlight in 2017 | HTC.com

HTC hasn’t been the smartphone world’s favorite manufacturer for quite some time. But some new phones for 2017 can help turn things around. And the company seems to be off to a great start in the new year with the HTC U Ultra.

The U Ultra is HTC’s most recent phone. The HTC 11 is expected to join it later in the year.

The U Ultra is a gorgeous glass phone, equipped with a Snapdragon 821 processor with 4GB of RAM. It also features a 12-megapixel Ultrapixel 2 camera and a 16-megapixel front camera. Plus, it runs Android 7.0 Nougat with HTC’s Sense UI.

Nick Gray reported for Phandroid that the HTC U Ultra “is exactly what HTC fans have been craving for a long time — a flagship-level phablet, which can hold its own when compared to the LG V20 or the Huawei Mate 9’s of the world.”

The Huawei Mate 9 is the first phone that comes with Alexa installed | Huawei.com

The Huawei Mate 9 technically launched in 2016. But it wasn’t until early 2017 that it became available to buy in the United States. That’s a pretty big deal because it’s actually the first time Huawei has offered one of its flagship phones directly to U.S. shoppers.

This powerful model packs a Kirin 960 processor, 4GB of RAM, and a gorgeous 5.9-inch display (with 1080p resolution). A 4,000mAh battery powers it. And it has dual 20-megapixel and 12-megapixel rear-facing cameras, co-engineered with Leica, plus an 8-megapixel selfie cam.

As The Verge noted, the Mate 9 will be the first smartphone to come with Amazon’s Alexa installed. That means the assistant will be available for help with all of the usual tasks, a development which The Verge’s James Vincent characterized as a “definite, if quiet, challenge to Apple’s Siri and the Google Assistant.”

Ahead of CES 2017, LG announced the Stylus 3, an affordable mid-tier phone that comes equipped with a stylus. Sascha Segan reported for PC Mag that LG’s stylus isn’t as high-tech as one Samsung built for the ill-fated Galaxy Note 7. And he conceded, “No matter how much I want it to be, the LG Stylus 3 isn’t going to be a Galaxy Note 7 replacement.”

But the Stylus 3 is still one of the only current Android phones with a stylus. It’s also a solid, mid-range phone that runs Android 7.0 Nougat, is powered by a Mediatek octa-core processor, and has a removable battery and memory.

Its rear-facing camera comes in at 13 megapixels, and the front-facing camera is an 8-megapixel module. Plus, the phone also has a fingerprint scanner, a 3,200mAh battery, and a stylus with a finer tip than its predecessor’s.

Samsung announced the 2017 variants of Galaxy A series devices at the start of the new year, Android Authority reportd. The lineup comprises three new phones: the 4.7-inch Galaxy A3, the 5.2-inch Galaxy A5 and the 5.7-inch Galaxy A7. Each features a metal frame with glass back. And they all earned IP68 certification for dust and water resistance.

The Xiaomi Mi Mix is one of the most exciting new phones we want to buy in 2017 | Mi.com

Xiaomi’s Mi Mix made quite the splash when it surfaced late in 2016. And we were pretty excited to see the company introduce a white version of the bezel-less phone at CES 2017.

It stands out from other new phones, thanks to the screen that takes up almost the entire front. The body is made of ceramic instead of metal or glass. And a Snapdragon 821 processor with 4GB or 6GB of RAM powers the device.

The ZTE Blade V8 Pro is one of the best new phones for anyone with a tight budget | ZTEUSA.com

The ZTE Blade V8 Pro is another addition to the list of compelling new phones for anyone who wants to try out a dual-camera setup. This device, announced at CES 2017, features 13-megapixel and 2-megapixel rear-facing cameras, plus a 13-megapixel front-facing camera.

CNET reported the device “offers a lot of hardware goodies” for its affordable price. For instance, it’s equipped with a dual-camera system composed of two 13-megapixel cameras. One of those can shoot in black and white, and together they can create a bokeh effect that blurs the background of an image.

A 2.0GHz octa-core Snapdragon 625 processor powers the device, plus 3GB of RAM and a 3,140mAh battery with QuickCharge technology.

Other new phones set to launch in 2017 include the Samsung Galaxy S8. It is expected to come in two variants and could get a dual-camera setup.

Another much-awaited flagship is the LG G6. It likely will ditch the modular design of the G5 and could be equipped with Google Assistant.

Also of interest if you’re planning to buy a new phone later in the year are the upcoming iPhone 8, the OnePlus 4 (or 5, depending on your expectations for naming conventions), the HTC 11, and the Xiaomi Mi 6.