The People’s Choice Awards 2016 were held on Wednesday (January 6) at the Microsoft Theater in Los Angeles, California. While the awkward stage-crasher moment basically stole the show, the stars’ style profiles run a close second in defining the evening.

While all the buzz is generally directed towards the girls and their gowns, the men made a decent showing, too, with a handful of more memorable looks. Check out these stars and their sartorial statements for a bit of fashion inspiration. 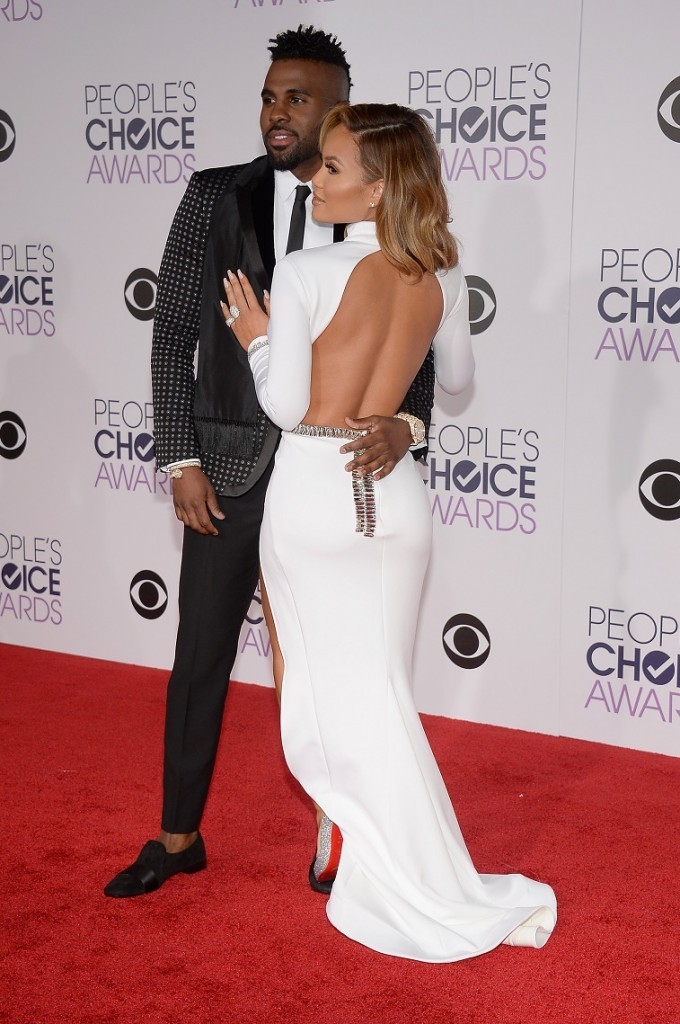 Jason Derulo had no shortage of swagger when he hit the red carpet with his plus-one, Daphne Joy, which marked their official debut as a couple. The mood was luxe when it came to his look that featured a tailored black, dotted jacket topped with a silk scarf and a skinny tie not to mention wrist candy in the form of diamond bracelets and a statement watch. Quite appropriately, the “Naked” singer skipped the socks with his slipper-style loafers to enhance the opulent, lounge-style aesthetic. Of course, once Derulo took the stage to perform a mashup of “Get Ugly” and “Want to Want Me,” he took an edgier sartorial spin, quick-changing into fire-engine red high-tops, black leather trousers, and a matching red printed jacket. 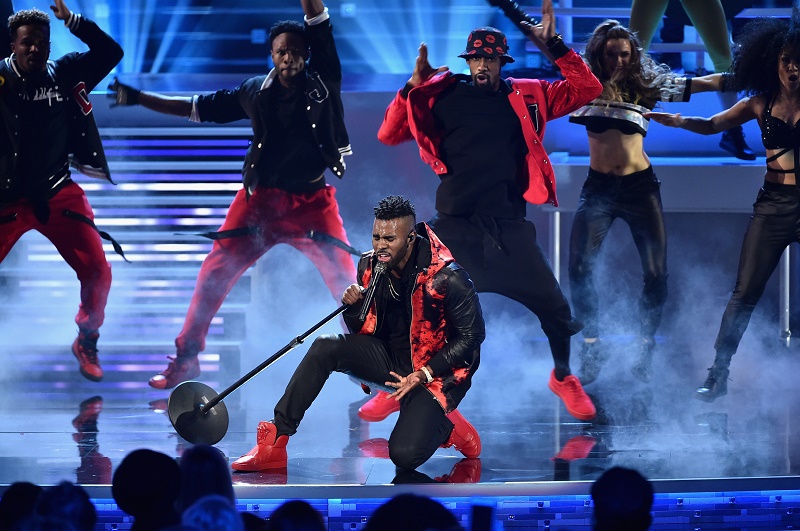 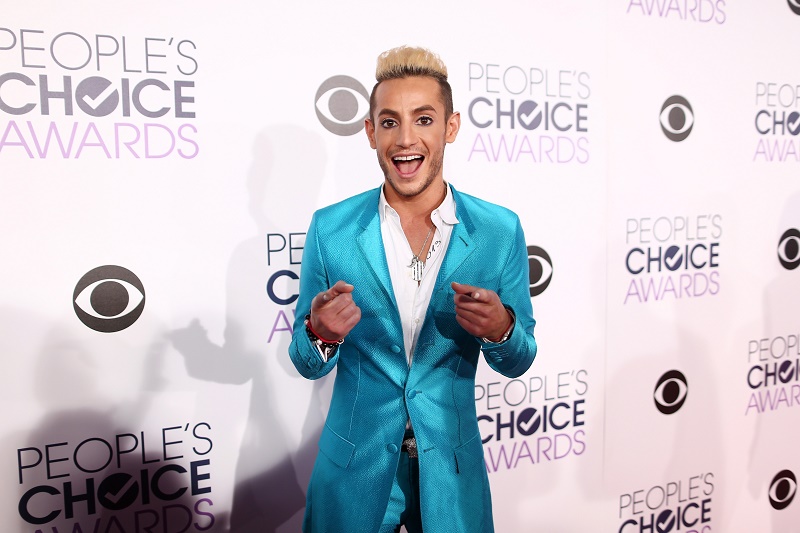 Ariana Grande’s older brother, Frankie J. Grande, was certainly no shrinking violet at last night’s awards. Nominated for Favorite Social Media Star, the performer and Internet was in good company as he upped his selfie game with the likes of Ellen DeGeneres, Portia de Rossi, and Meghan Trainor. But he owned his “blue steel” moment on the red carpet in a Malan Breton shiny teal, embossed suit, which he paired with matching Christian Louboutin dress shoes that prove the power of color coordination. A Versace belt rounded out the look that’s not for the faint of fashion heart. Grande is no stranger to the Malan Breton label, as he made his New York Fashion Week debut in the Taiwanese designer’s Fall 2015 show. 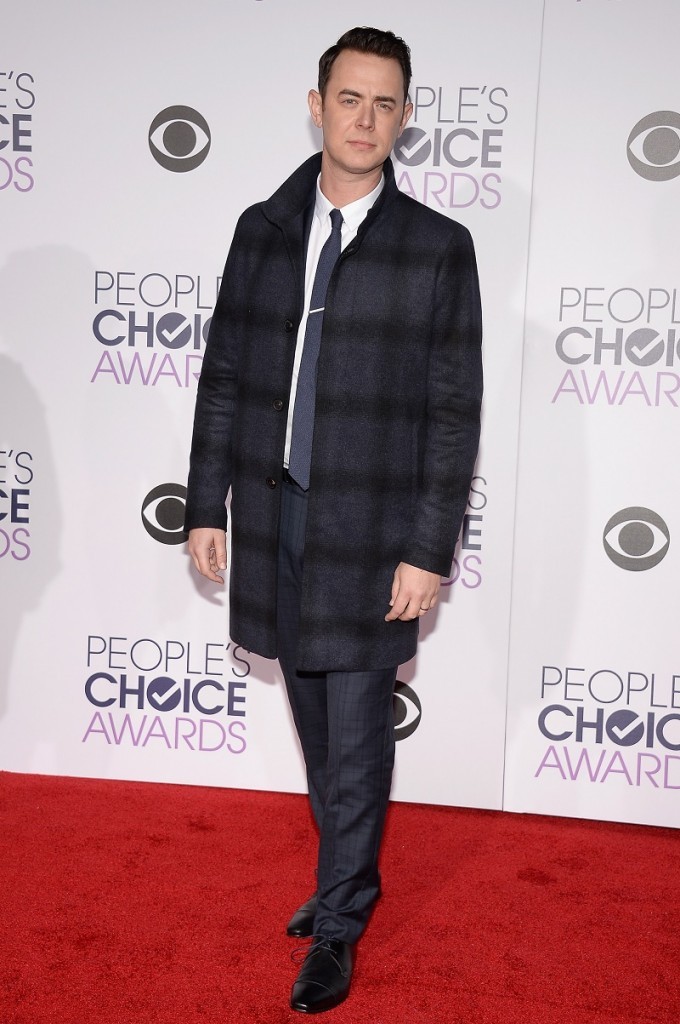 Not only does Colin Hanks boast the pedigree of his famous father, his sartorial sensibilities are on point, too. The Life in Pieces actor wore a Moods of Norway suit and Paul Allen shoes but it was his rich navy Theory overcoat that really stood out on the red carpet. The coat imbued the more basic, suited-up look with a dapper, refined attitude that stood out amidst the crowd. The tie bar added another flourish to finish out what was one of the night’s more sophisticated style presentations. 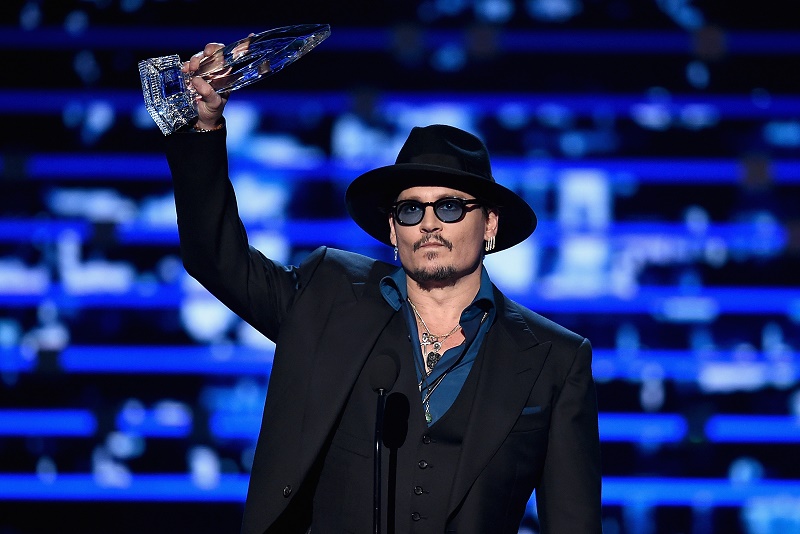 Infamous for his rather eccentric style, Johnny Depp kept it relatively tame at the PCAs, where he accepted the award for Favorite Dramatic Movie Actor in Black Mass. The dark three-piece suit was nothing to write about, but what won him a spot on the most memorable list was his styling. Accessories were the name of Depp’s game, starting with the black fedora that stayed on throughout his trophy acceptance speech. Blue-tinted shades matched his button-down shirt while piles of man jewelry including pendants, earrings, and chunky rings added a rocker-grunge edge to the eclectic mash-up that showed that confidence is half the battle when it comes to outside-the-box dressing.

Black is the New Black 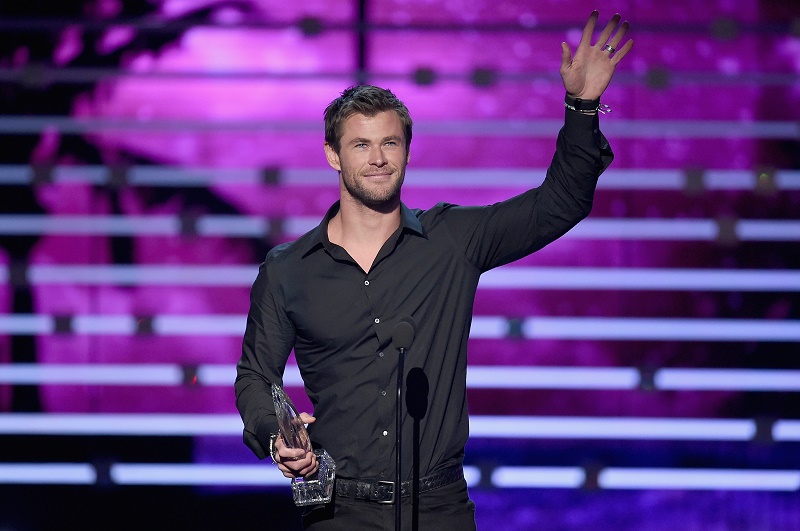 A monochromatic moment never looked better than on Chris Hemsworth who donned the male equivalent of a little black dress for the evening by wearing a black shirt, black pants, and black timepiece. The ensemble may have been basic, but it projected a casual, cool vibe. Hemsworth managed to strike a handsome profile while simultaneously looking as nonchalant as possible, especially given that facial scruff. The unified color palette and the tailoring — plus the strategic unbuttoning of the shirt — help to create the impact here. 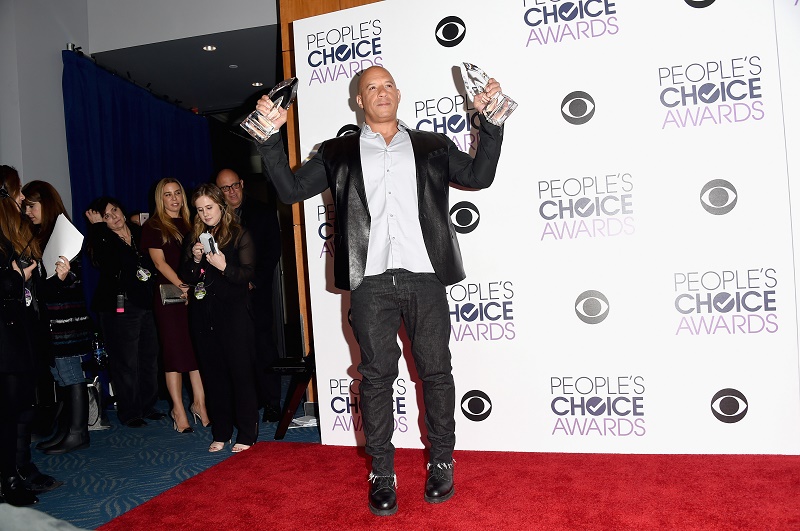 Earlier in the day before the show, Vin Diesel showed off what appeared to be his ongoing transition from dad-bod to back-in-buff on Instagram. But for the People’s Choice Awards, he covered up in a look that very much toed the line between informal and all-dressed-up. His slick black moto jacket brought all the Vin Diesel fueled-up edge you’d expect while the un-tucked dress shirt and frayed denim jeans had a certain devil-may-care flair. Of course, when you’re posing with two trophies for Favorite Movie and Favorite Action Movie for Furious 7, anything goes.