8 Phones That Are Almost Impossible to Break

Modern smartphones are pretty impressive. They’re packed with features, sometimes including features you don’t actually need on a smartphone, and they’re quickly gaining new capabilities, too. You can buy great smartphones from the world’s top smartphone makers. Or, you can opt for an awesome device from one of the brands few people know about. Some people want the latest and greatest phone, but others just want a phone that’s impossible to break — or at least almost impossible to break compared to your typical smartphones.

Finding a phone that can withstand drops, bumps, and other damage is more complicated than finding one that can tolerate the occasional run-in with water. But accidental drops can be a major threat for fragile devices like smartphones. You can find mainstream flagship phones that offer some protection against splashes and dunks, but truly rugged smartphones are still a class of their own. And if you’re really looking for a device that’s durable enough to be dropped multiple times without breaking, then you’re probably willing to sacrifice just a little bit when it comes to sleek design.

Ahead, we’ve collected a few of our favorite durable and rugged phones. Some are great at guarding against water damage, and some have shatterproof screens. Some are designed to withstand bumps and falls, while others are optimized for outdoor use. Whatever you need in a durable phone, you’re going to find it here.

Caterpillar’s Cat S60 is one of the most durable smartphones on the market | Catphones.com

Caterpillar’s new Cat S60 is the way to go if you want a truly rugged phone. This phone is marketed toward engineers, construction workers, and inspectors — all people who appreciate a phone that’s built to be tough. It’s built to withstand falls onto concrete from a height of almost 6 feet with Military Standards 810G certification. It can also be submerged in 5 meters of water for up to an hour. It features a 3,800mAh battery, a Snapdragon 617 octa-core processor, and 3GB of RAM. Additionally, this is the first smartphone to integrate a thermal imaging camera, which visualizes heat as a colorful map and can take measurements from up to 100 feet away. You can use the heat sensor with the 13MP camera to get a photo that combines the heat map with details captured by the camera.

The Kyocera Duraforce XD can survive a lot of abuse | Att.com

The Kyocera DuraForce XD, available at AT&T and T-Mobile, is a great choice if you need a truly robust phone to stand up to some rugged conditions. This device is dustproof and shockproof, can withstand extreme cold and hot temperatures, and can be submerged in up to 6 feet of water for 30 minutes. It features Military Standards 810G certification for dust, shock, vibration, and extreme temperatures, and the IP68 rating offers assurance of its ability to withstand submersion. (If you think the phone might take a dip, however, you’ll need to make sure that the charging port and headphone jack are closed to guard against water.) The device features a 1.6GHz processor, 2GB of RAM, and a 3,700mAh removable battery. Thanks to the 5.7-inch display and the industrial design, it’s one of Kyocera’s largest rugged phones.

The Kyocera Hydro REACH is a smartphone that is both affordable and waterproof | Boostmobile.com

The Kyocera Hydro Reach, available at Boost Mobile, is a surprisingly affordable waterproof phone. It’s certified IP57 dustproof and will be protected for up to 30 minutes in 1 meter of water. It also has a Wet Touchscreen Operation feature to enable you to use it even when the 5-inch screen is wet. Additionally, it’s equipped with a 1.1GHz quad-core processor, 1GB of RAM, 8GB of internal storage, and a 2,160mAh battery. This is a great phone if your primary concern is water, and offers great outdoor screen visibility. However, it’s worth noting that this phone isn’t as rugged as many of the other phones on our list. But if you need a budget-friendly device that won’t break down upon encountering water (or juice, or whatever your kids throw at it) then this may be the right phone for you. 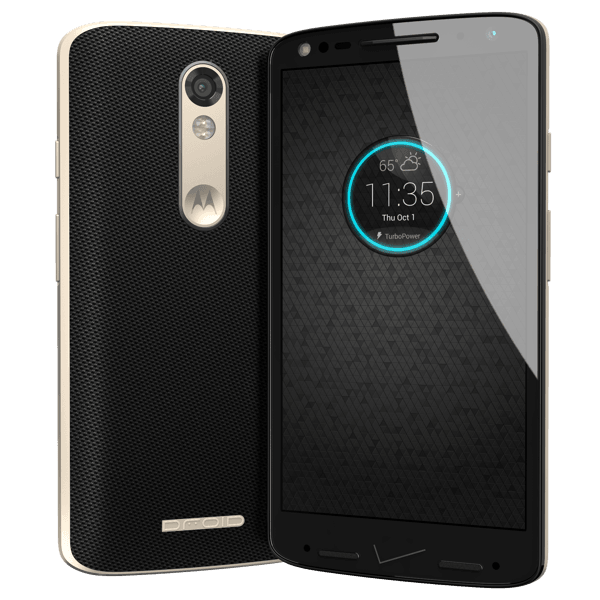 The Motorola Droid Turbo 2 is an attractive option for Verizon customers who want a drop-proof phone that’s also a great smartphone. Motorola claims that the device features the world’s first shatterproof display, which the manufacturer calls a Moto ShatterShield display. The display is warranted against shattering and cracking for four years from the date of purchase, but it’s worth noting that this device isn’t shockproof, and probably can’t withstand all damage from dropping. Nano-coating technology makes the device water-repellent, and a 3,760mAh battery promises 48 hours of battery life. Additionally, the device features TurboPower charging, which enables it to gain up to 13 hours of battery life in just 15 minutes of charging. Plus, this phone features a 5.4-inch AMOLED Quad HD display, a 21MP camera, and a Qualcomm Snapdragon 810 processor.

Samsung’s Galaxy S7 is a smart choice for those looking for a durable smartphone | ATT.com

If you want a high-end smartphone that will also handle drops and dunks, then consider Samsung’s impressive flagship. The Galaxy S7 and Galaxy S7 Edge both earned an IP68 rating and can be submerged in 1.5 meters of water for 30 minutes. If you really want a rough and tough smartphone, you can even opt for the Galaxy S7 Active, which features a 4,000mAh battery instead of the regular S7’s 3,000mAh battery. It also adds a more robust build with a metal frame and a shatterproof screen, and carries not only the IP68 rating, but also Military Standards 810G certification. That indicates that this device can withstand a drop from any “normal” distance and won’t be ruined by humidity, vibration, or solar radiation.

The Samsung Galaxy Xcover 3 is a budget-friendly phone that’s still great for rugged use | Samsung.com

If you’re less interested in one of Samsung’s priciest phones and more excited about finding a budget-friendly alternative, then consider Samsung’s Galaxy Xcover 3. This device features a quad-core Marvell Armada PXA1908 processor, 1.5GB of RAM, and a 5MP camera. While those specs may not set the phone apart from other low-end phones, its IP67 and Military Standards 810G certification do stand out. Together, they mean that the phone will tolerate submersion in a meter of water for 30 minutes, and will resist dust, salt, humidity, rain, vibration, solar radiation, transport, and thermal shock. If you need a durable but affordable phone that can take some abuse, this one is worth considering.

You can use the Sonim XP7’s touchscreen with wet or dirty gloves | Sonimtech.com

If you need a phone that’s truly impossible to break, the Sonim XP7 aims to fit that bill better than any other. This “ultra-rugged” phone may not have the latest version of Android or the latest components. (After all, this phone first hit the market in 2014.) But it does have a touchscreen that’s viewable in direct sunlight and usable with wet or dirty gloves. It’s resistant to drops and water, and has an “extra loud” speaker, noise cancellation, and a powerful 4,800mAh battery. The device features a 1.2GHz quad-core processor, supports LTE connectivity, and will stand up to the elements on even the toughest job site. A few drawbacks, however, are its low-resolution screen and its high price, which may be deal breakers for some.

The Verykool Rock RX2 may be the best bet for those who are frequently around water | Verykool.net

If you can get past the brand name, the VeryKool Rock RX2 is a solid choice for users in the market for a resilient phone. This device has an IP68 rating, which means that it’s submersible up to 5 meters for 60 minutes. It’s also dirt proof and shockproof. Its 4.3-inch IPS-LCD screen features tempered glass, and the screen is responsive even when you’re wearing gloves. The phone is equipped with a 1.5GHz quad-core processor and a 1,900mAh battery. It also features a 13MP rear-facing camera, and VeryKool markets this phone as an ideal device for “extreme adventures,” which that camera can record.