When we think of princesses, we think of the glitz and the glamor, the fame and the fortune, and, certainly, the unattainable. Princess Diana, however, was not your typical princess. Before she married Prince Charles and became the Princess of Wales in 1981, Lady Diana Spencer was a commoner — a commoner from an aristocratic family, but a commoner nonetheless.

She was compassionate about the causes she believed in, humble to the core, and, without a doubt, controversial at times. People all over the world could relate to her; she was someone they saw themselves in.

In addition to her philanthropic efforts, royal agenda, and being the mother to the future King of England, the “people’s princess” had a killer sense of style. From her ball gowns to her monochromatic skirt suits to her off-duty trousers and crewneck sweatshirts, the princess was — and still is — one of the most influential trendsetters of our lifetime.

We’ve narrowed down some of her most iconic looks, ahead.

When it comes to her fashion, Princess Diana was the queen of bold colors and often accessorized monochromatically. Case in point? This electric blue, one-shouldered gown she wore for a dinner dance at the Victor Chang Research Institute in 1996. The people’s princess paired her bold gown with a handbag and heels in matching hues.

Princess Diana on her first visit to Kyoto, Japan 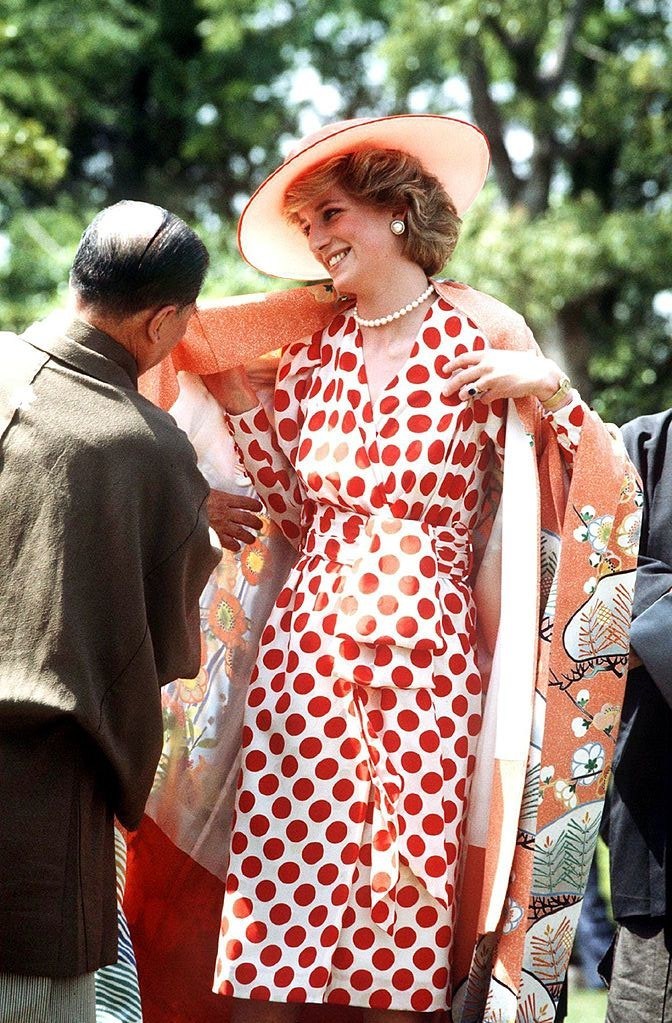 She was mixing patterns before it was trendy. | AFP/Getty Images

No trip to Japan is complete without a traditional Japanese kimono. During her first visit to the ancient city of Kyoto in 1986, the princess wore a red polka dot long sleeved dress with a matching sunhat. While she didn’t initially plan to wear the kimono — which, by the looks of it, was gifted to her during her trip — the mix of patterns and bright colors give this look a fun yet sophisticated appeal.

If there’s one thing we love most about Lady Di’s style, it’s her ability to match her hats to her outfits without looking too matchy-matchy. Pictured here on VJ Day with her sons, Prince William and Prince Harry, in 1995, the princess wore a mod white skirt suit with black striped details. To tie the look together, she added a bold black and white striped sunhat.

Princess Diana on her wedding day

The wedding dress seen around the world | AFP/Getty Images

Known as one of the most famous dresses in the world (it even has its own Wikipedia page), the Princess of Wales’ wedding dress is iconic in its own right. Designed by David and Elizabeth Emanuel, the dress’s details consisted of hand embroidery, sequins, 10,000 pearls, antique lace that once belonged to Queen Mary, and a 25-foot train.

Princess Diana at the Met Ball in 1996

Princess Diana brought the glam to the 1997 Met Ball in a navy slip dress with lace detail and a matching silk duster cardigan. And what did she accessorize with? Her sapphire, diamond, and pearl crown jewel necklace, of course.

Princess Diana at the Museum of Women in Art in Washington 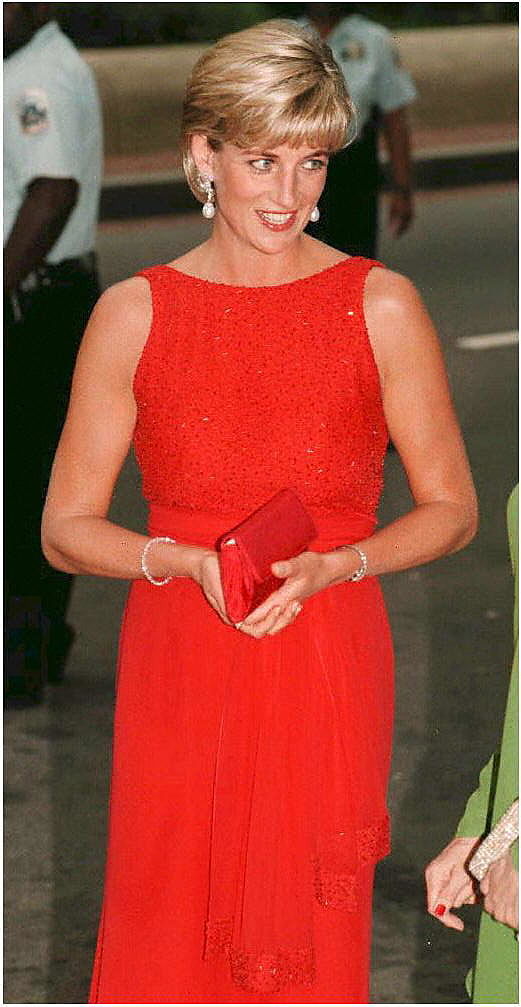 Lady Di brought the bold to a 1997 Museum of Women in Art gala dinner in this fitted red gown. The beaded bodice and belted waist — paired with her crown jewels, of course — add some extra glitz to an otherwise simple yet stunning number.

She wasn’t afraid to break the mold. | Joyce Naltchayan/AFP/Getty Images

Another thing Princess Diana was known for? Bending the rules. This could be said for both her outspoken behavior and her style choices. In her early years as princess, she donned many full-skirt, conservative gowns. But, as the years went on, she began to show more skin through shorter hemlines and sexier designs.

Case in point? The backless lace gown she wore to the Nina Hyde Gala in 1996. Featuring a halter neckline, the form-fitting gown accentuated the princess’ figure and showed off her toned arms.

Channeling Jackie O at the Doctor Angel Roffo Hospital in Buenos Aires, the Princess of Wales meant business in a baby pink, short-sleeved skirt suit. The sophisticated look boasted her love of color but was respectful for the occasion.