The Most Questionable Celebrity Hair Color Choices of All Time

Bad hair days are a universal annoyance, and not even celebrities are immune. It’s true — stars, they’re just like us. They even go through some pretty questionable hair color choices that remind us our platinum blonde phase wasn’t so bad after all.

Here, a look at 15 of the most questionable celebrity hair color choices of all time that shocked, awed, and amazed us. These drastic, dated, and overdone dye jobs are a perfect example of what happens when bad hair happens to good stars. 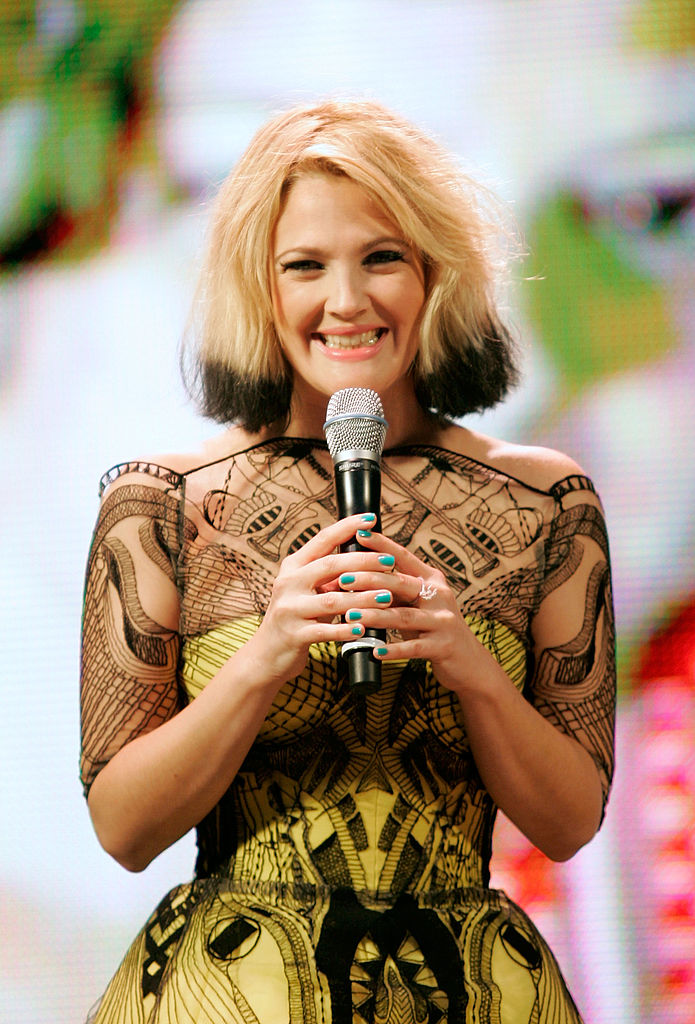 Drew Barrymore made an odd choice with this look.| Malcolm Taylor/Getty Images

In 2008, actress Drew Barrymore took her pretty blonde bob and dip-dyed the tips black, making it look as if she had just had an unfortunate run-in with an oil spill or an inkwell. This was a new kind of two-tone ’do that only left us scratching our non-two-tone heads. 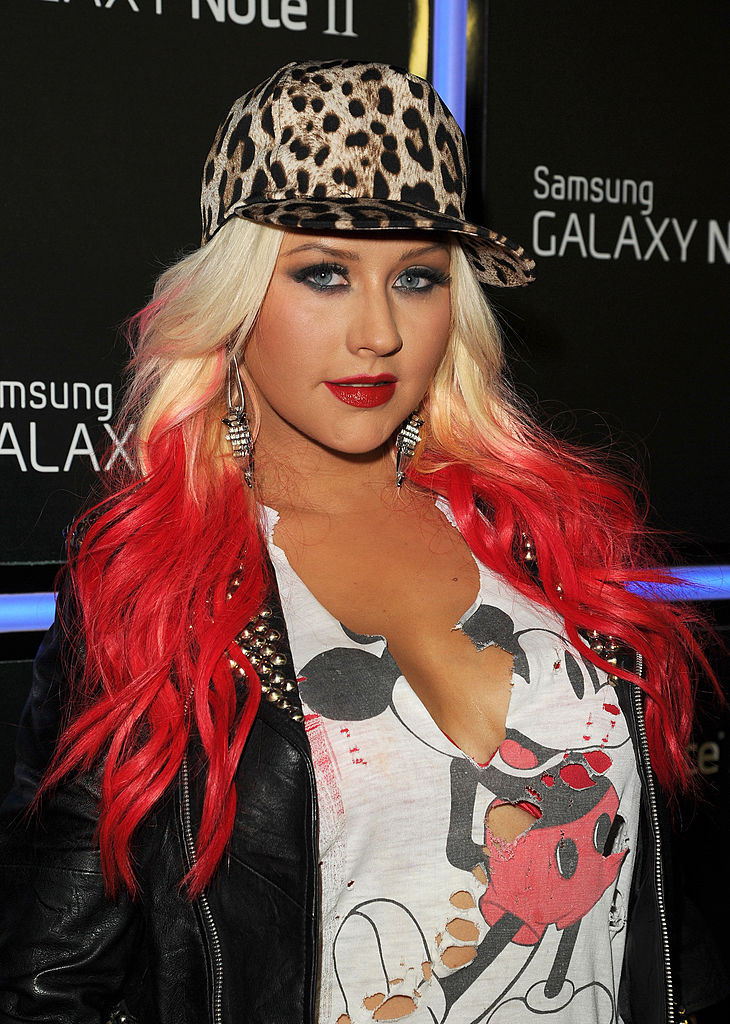 It was bold, but maybe not the most flattering look. | Jason Merritt/Getty Images

Singer Christina Aguilera has gone through a number of questionable colors — especially during her early pop princess days. Way back in 2000, when she was first emerging on the scene, who can forget her black-and-white-and-red-striped hair. But it was later in 2012 that she really raised eyebrows with her dip-dyed hot-pink hair. If Drew Barrymore looked like she had run into an oil slick, Aguilara seemed to get acquainted with a gallon of cherry Kool-Aid. 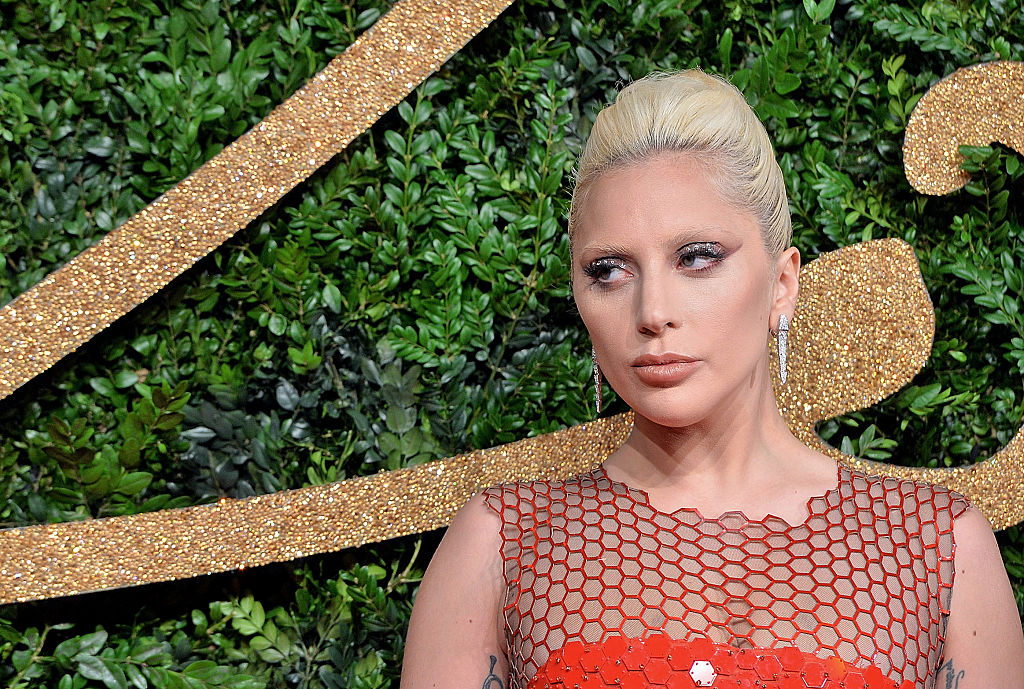 For a short time, the more questionable celebrity hair color choices actually came down to the color of their brows. The bleached brow was a short-lived blip, likely because it really wasn’t flattering on anyone. But, that didn’t keep stars like Kim Kardashian and Lady Gaga from trying it out. While some may not prefer Mother Monster as a blonde, what’s more questionable is her missing-in-action dyed eyebrows at the British Fashion Awards in November 2015. 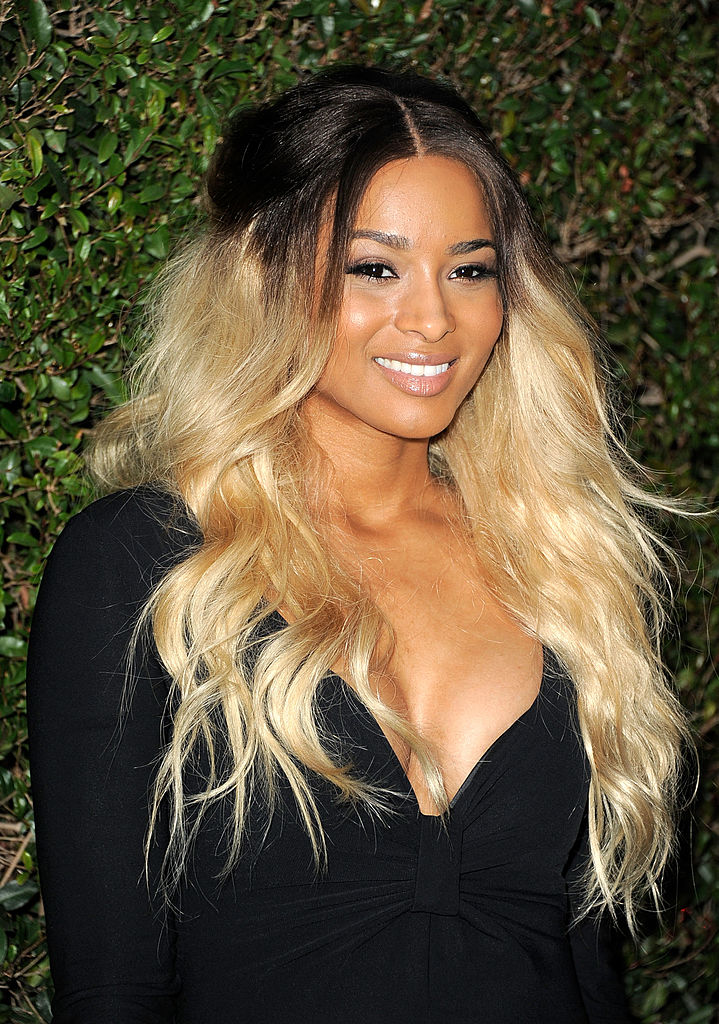 Ciara sported a two-tone ‘do for a while. | Frazer Harrison/Getty Images

As we’ve already seen, celebrities get into some of the most questionable trouble with their tresses when they go for a radical two-tone dye job. We see that here again with songstress Ciara, whose ombre locks in early 2012 didn’t quite achieve the right fade. In this case, her roots simply look overgrown with the distinct line between the darker and lighter colors. This hair faux pas didn’t last too long; a few months later, she was rocking far more well-blended colors. 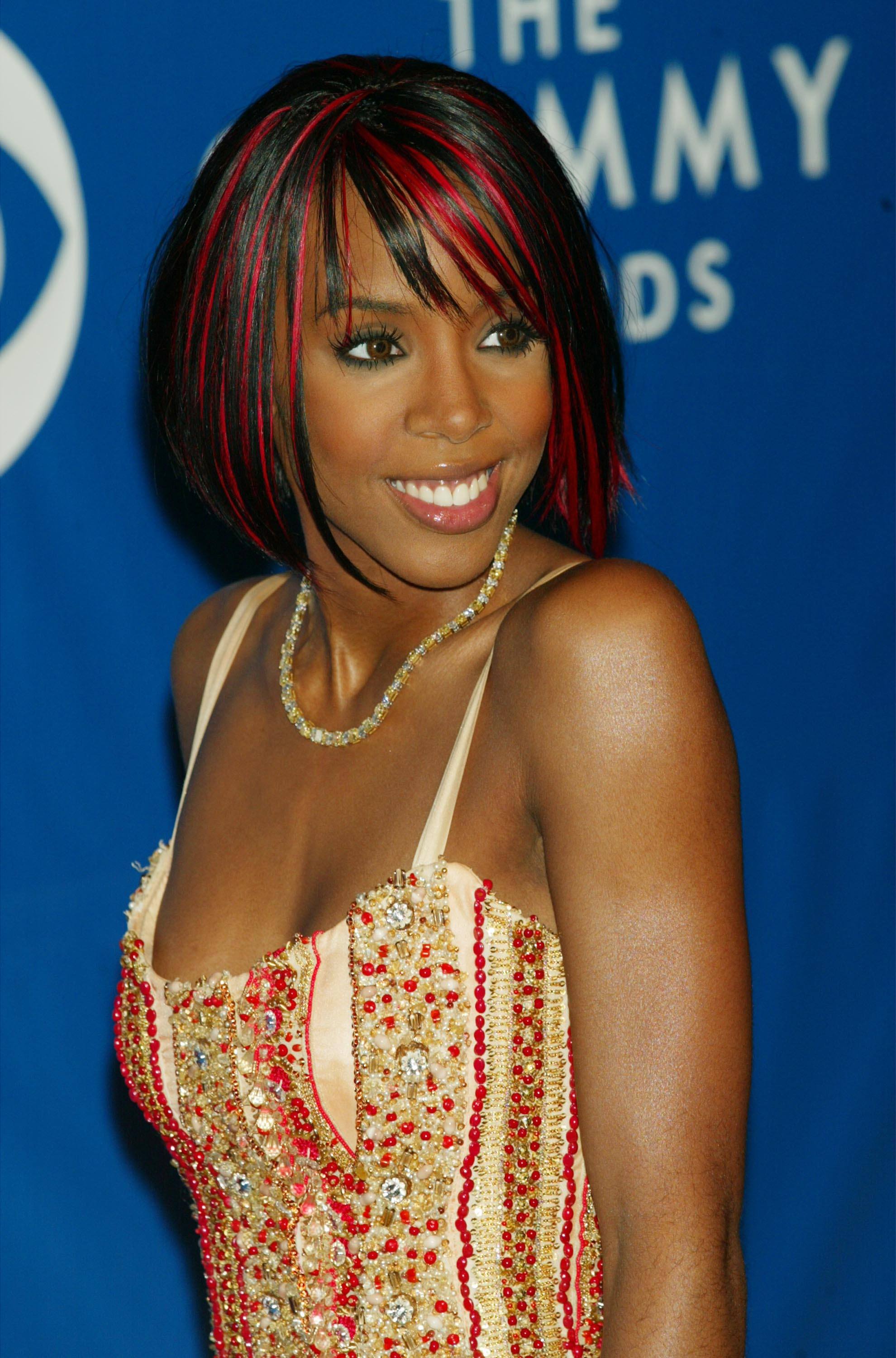 Back in the heyday of Destiny’s Child in 2003, singer Kelly Rowland went on a red streak with her cropped bob. But no matter how hot the group was at the time, these fiery flashes of crimson burned a bit too bright. 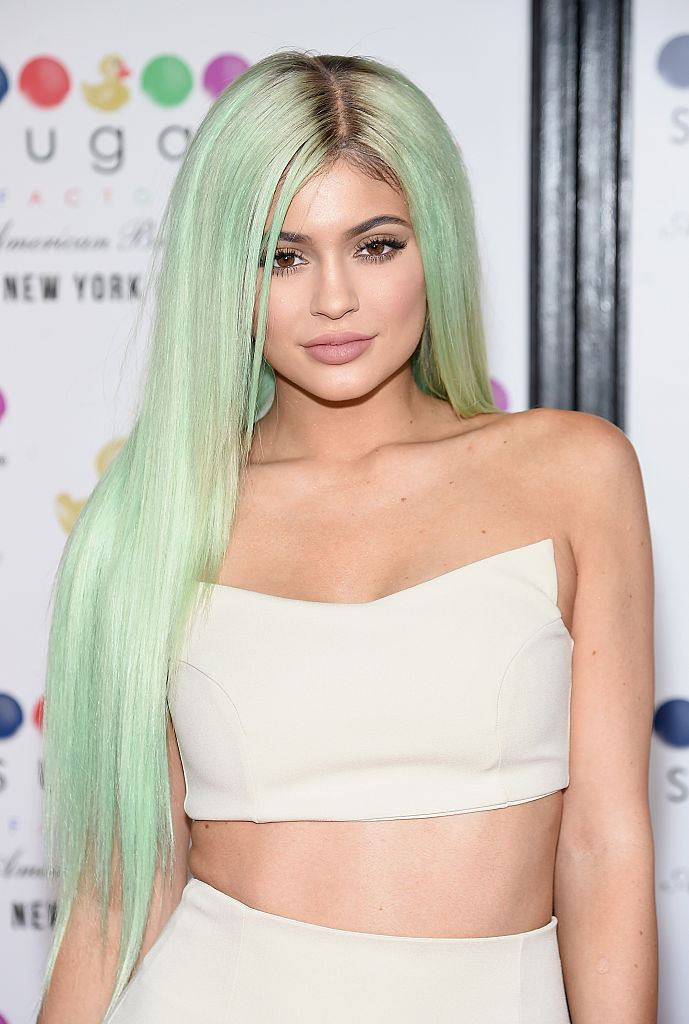 In September 2015, Kylie Jenner got in touch with her inner wild child, going from jet-black to blonde to icy blue at various points throughout the year. But it was this flirtation with sea-foam green that we truly couldn’t understand — especially not with her dark roots showing through the pastel surface. Clearly, she was inspired by My Little Pony, but thankfully the phase didn’t last long. 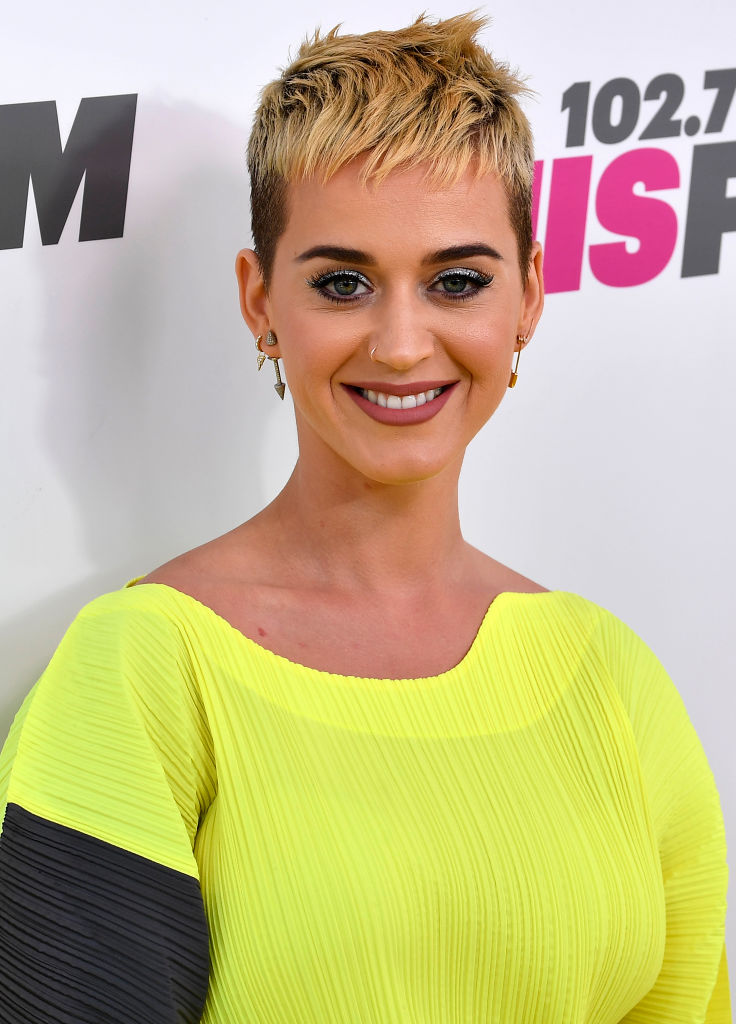 When it comes to My Little Pony hair, no one has flaunted as many shades as singer Katy Perry. She is nothing if not a hair chameleon, going from cotton candy pink to electric Smurf blue to a true rainbow stripe of hues. And let’s not forget grassy green, light lavender, teal, bubblegum, and violet — the list goes on.

Many of those colors could rank highly on the questionable meter, however, the color treatments were often executed quite well and she wore them in top form despite the crazy Crayola shades. It’s her most recent look in the summer of 2017 that translates far more questionably. The buzz cut, while extreme, is fine. It’s the brassy blonde pieces on top in contrast with the darker shaved part that’s memorable for the wrong reasons, though. 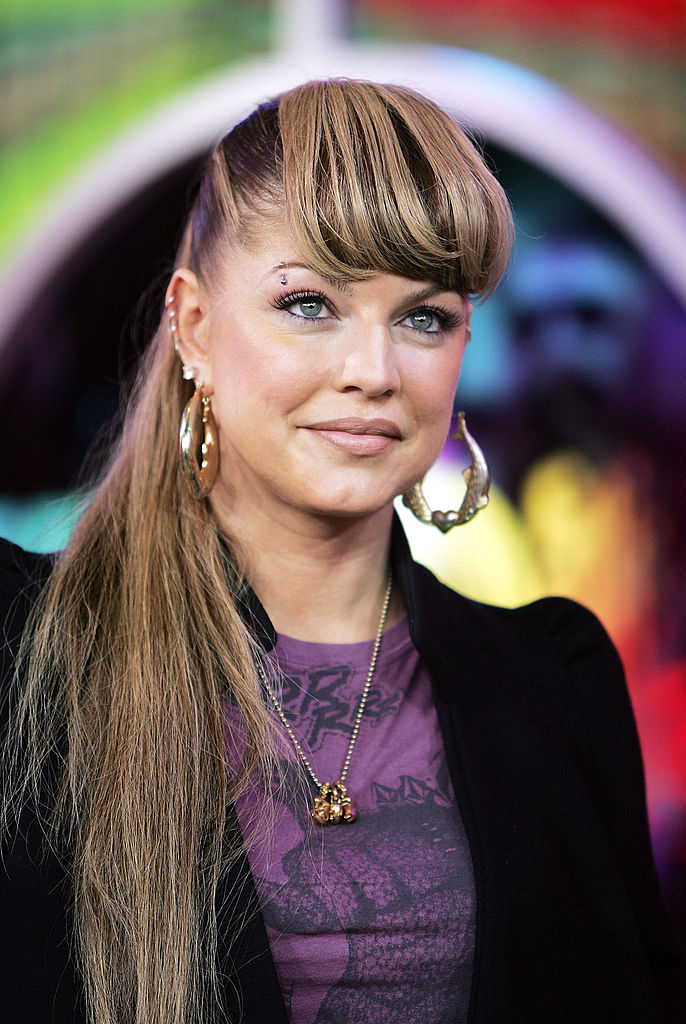 Fergie can pull off a lot of looks, but not this one. | Scott Gries/Getty Images

Fergie’s striped bangs during her Black Eyed Peas era didn’t last long — and for good reason. Not only was the swooped style a bit overbearing for her face, the dye job was just way too extreme with the black and blonde pieces. Her stylist must have had the power of persuasion in spades to get her to rock this two-tone look in November 2015. 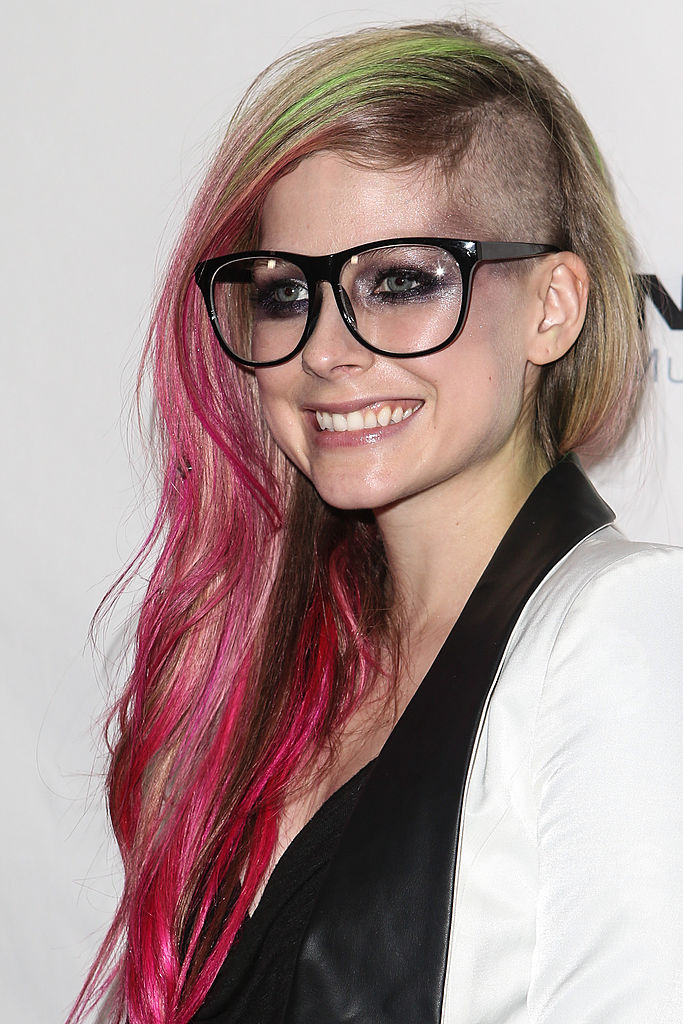 This look was just too much for, even for Avril Lavigne. | Chelsea Lauren/Getty Images

You know your color’s bad when it has the power to draw attention away from your half-shaved punk ’do. But that’s the case with singer Avril Lavigne’s flirtation with magenta, pink, and lime green locks back in September 2013. This style had us wanting to shave it all off and make her start over again. 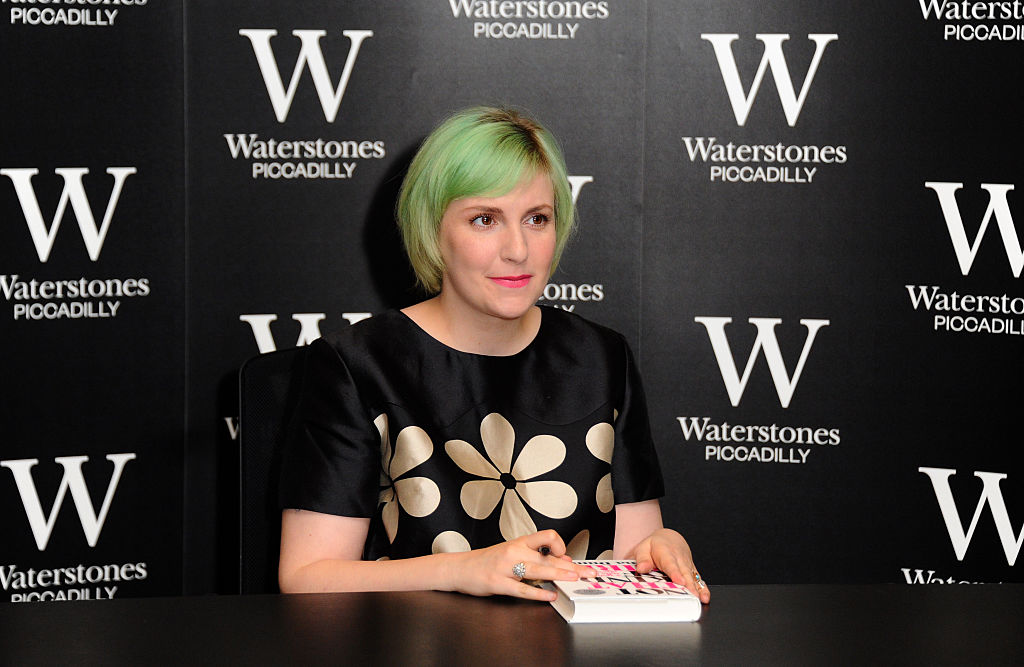 Girls actress Lena Dunham had gone from brunette to platinum in 2014, which she rocked quite well while proving that blondes might actually have more fun. But the fun stopped later in the year when she debuted neon-green strands — with a side of mousy brown roots — in October 2014. It looks like she stayed in the pool way too long and had permanent chlorine streaks. 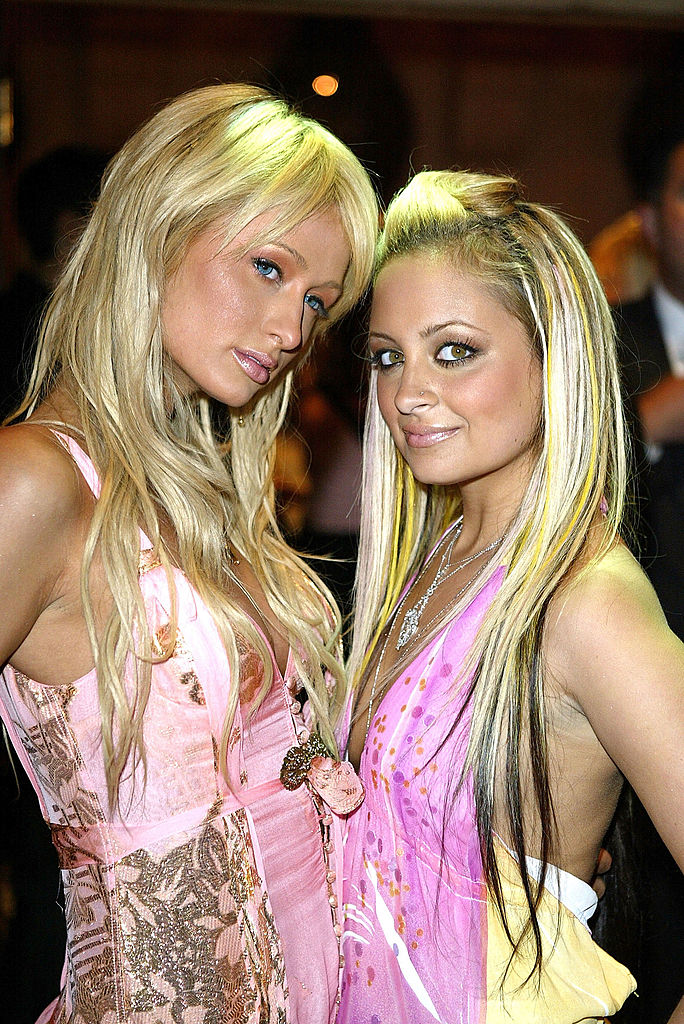 Nicole Richie rocked black strands for a while. Thankfully, it was just a phase. | Frazer Harrison/Getty Images

Nicole Richie has undergone the ultimate transformation from Paris Hilton’s BFF in The Simple Life to a simply sophisticated stunner and style mogul. Back in 2004, though, she was still finding her way with these long blonde locks with black streaks. This style is easily one of her far less successful ‘dos — or, should we say don’ts? 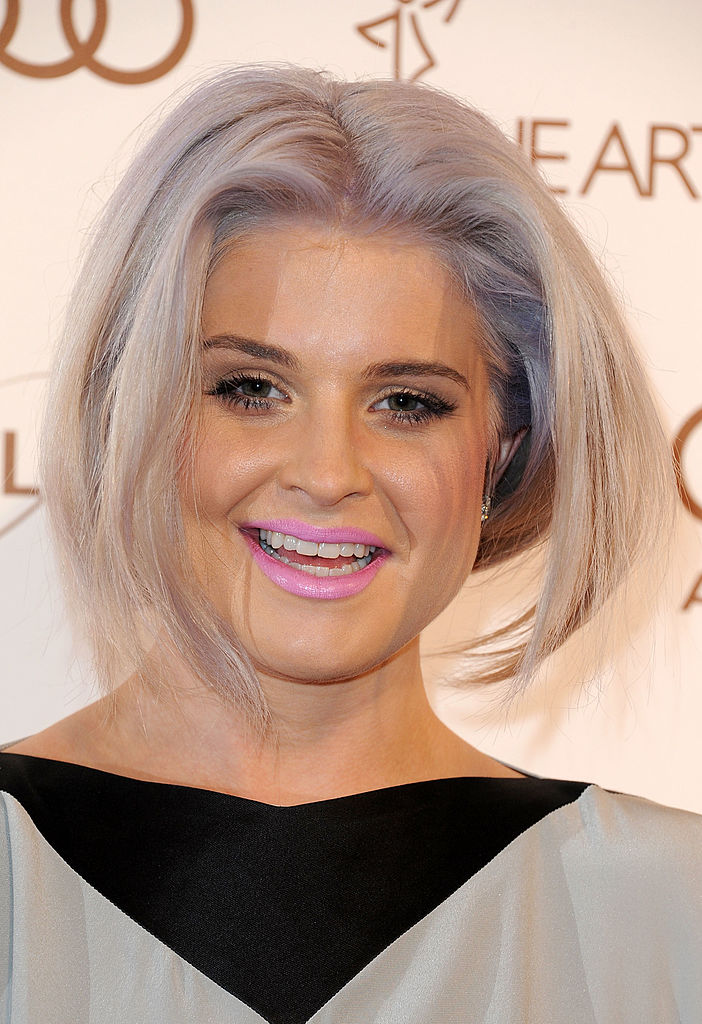 Kelly Osbourne’s between-colors ‘do had us scratching our heads. | Valerie Macon/Getty Images

TV personality and Fashion Police alum Kelly Osbourne has had a longtime love of lavender locks, but it wasn’t always that way. Before going to the lilac-laced strands that she rocks on the daily, she went gray with varying modes of success. However, it has when that gray and purple muddled together to create a washed-out effect in early 2012 that the hair police needed to be summoned. 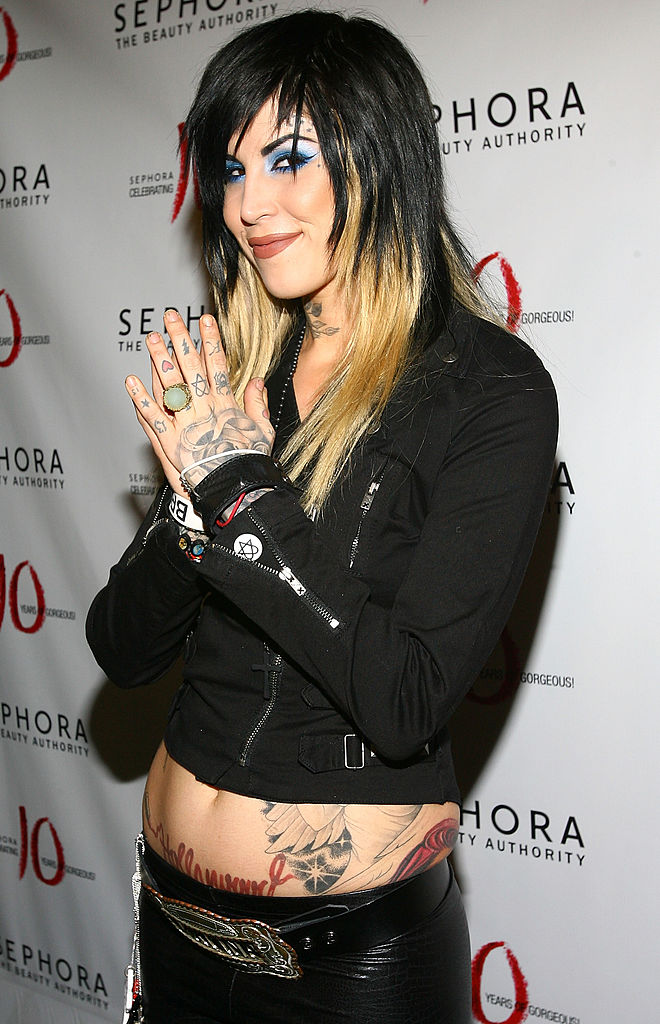 Television personality and tattoo trendsetter Kat Von D was also a victim of the tragic two-tone hair when she was spotted at beauty store Sephora’s 10-year anniversary in 2008. Not only was her black-and-yellow hair somewhat reminiscent of a bumblebee, her bright blue eye shadow didn’t exactly lessen the wild sting. 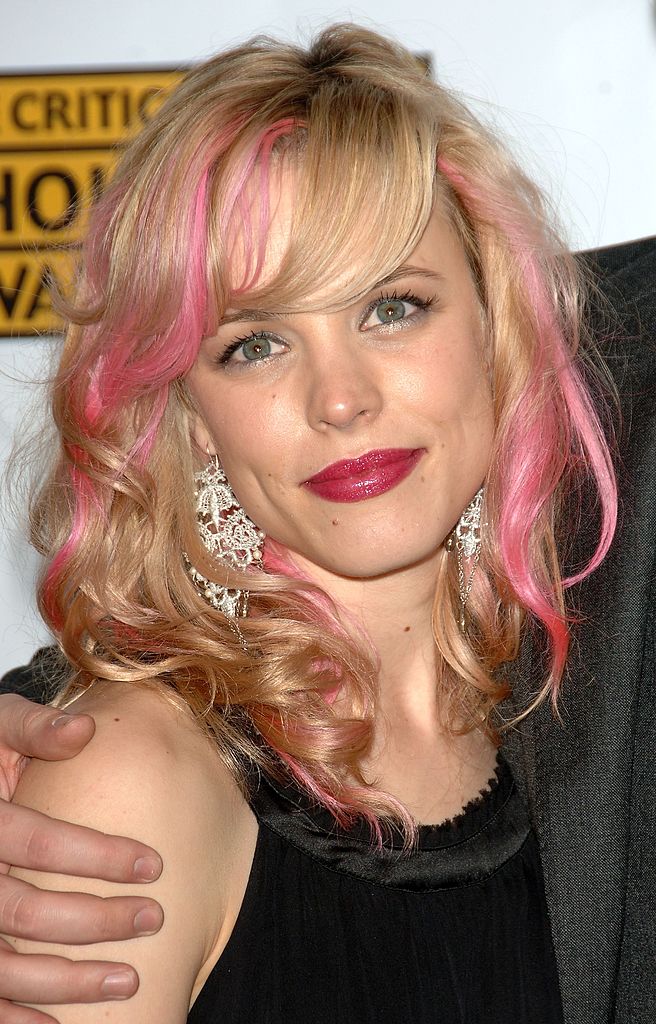 Rachel McAdams has since ventured away from bubblegum-pink locks. | Stephen Shugerman/Getty Images

Pretty in pink took on an all-new meaning for actress Rachel McAdams when she experimented with streaks the same color as Bazooka bubblegum in early 2007. Was it cute and girly? Sure. But it was also quite questionable as it resonated a bit juvenile. 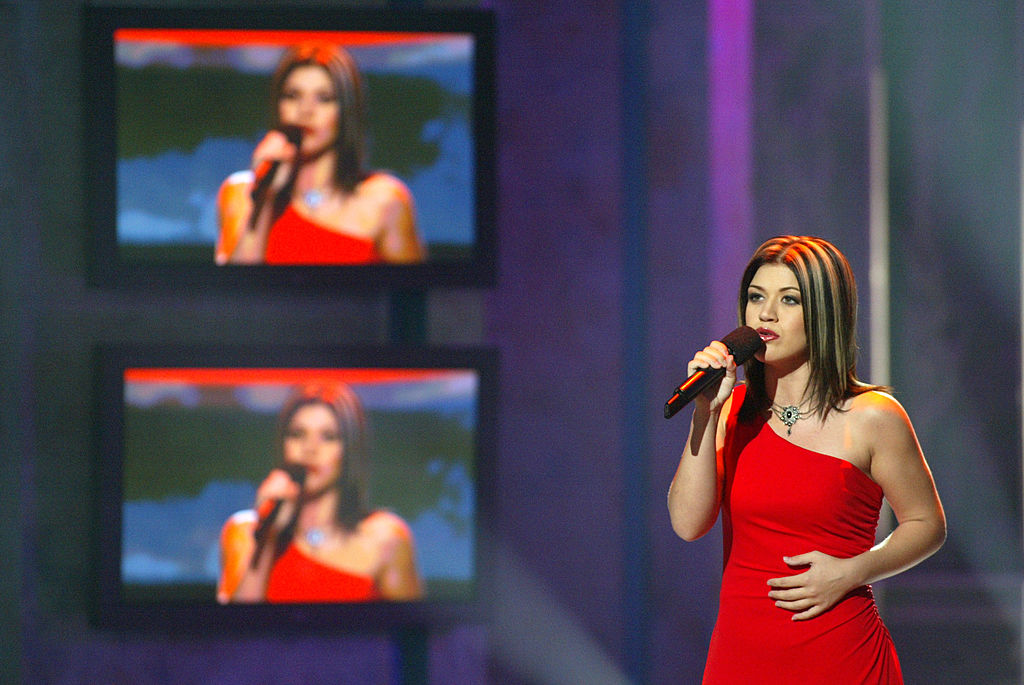 Most of us probably remember the big hoopla over the first season of American Idol way back in 2002. Kelly Clarkson won big on the show and with viewers, but her hair was another story. The bright, ash blonde pieces on the dark brown base might have been a trend, but her strands took it to the extreme. Good thing the skunk streak is way over.