Reese Witherspoon Knows a Thing or 2 About Wearing Bright Colors

Whereas most Hollywood stars only feel safe wearing black and white, Reese Witherspoon prefers to stand out from the crowd in colorful gowns. She’s covered  just about every shade imaginable and, somehow, each look seems to be even better than the last. Whether she’s in bright blue or orange, Witherspoon knows exactly how to style her hair, accessories, and spray tan to make the dress pop. We could all definitely learn a thing or two from these colorful statements.

1. A vision in yellow 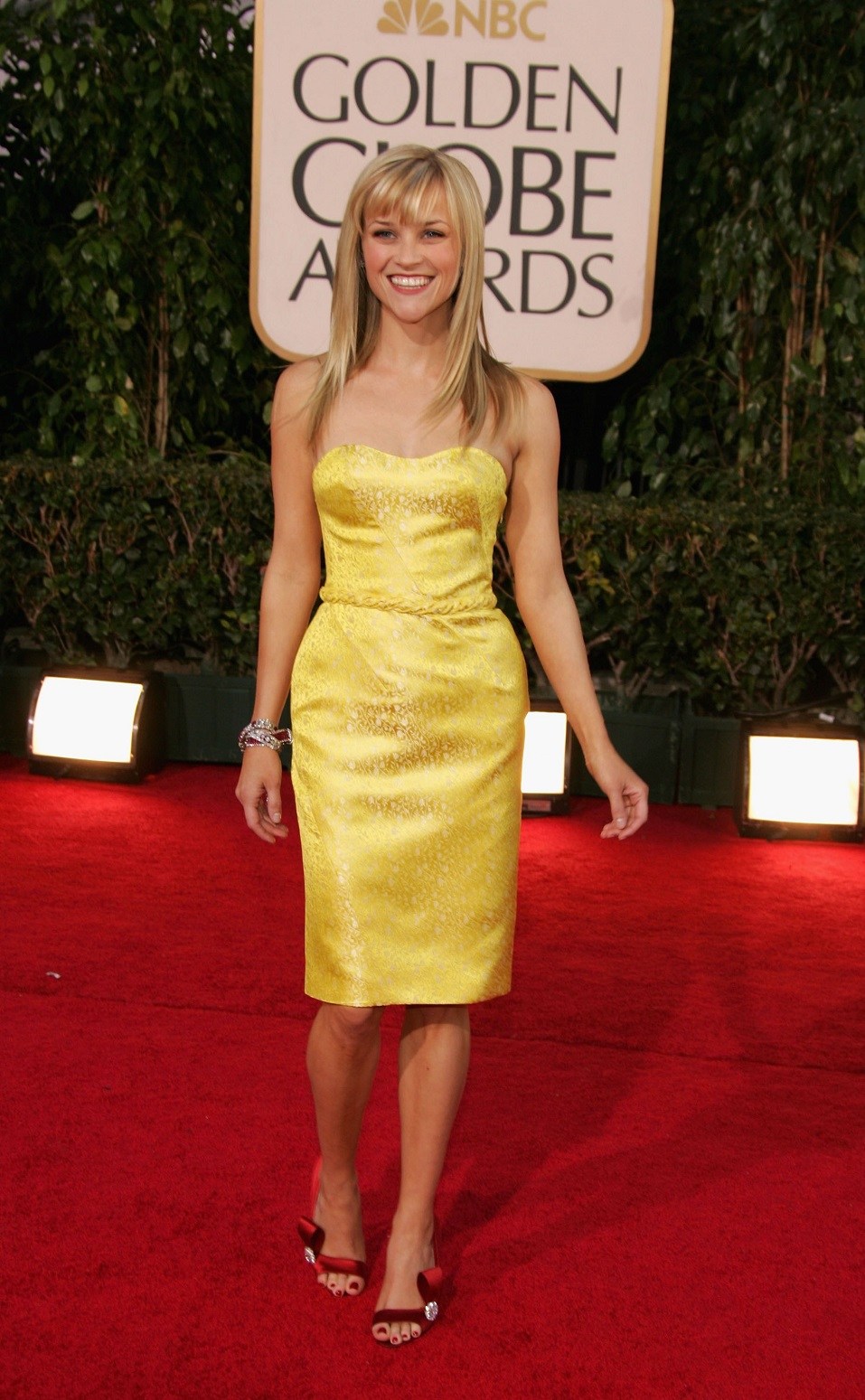 Reese Witherspoon looked every part a Southern belle in her form-fitting yellow dress at the 64th Annual Golden Globes. Witherspoon was born in Atlanta but raised in Nashville, Tennessee, so it’s no wonder she’s a fan of brightly colored dresses. With her signature blond locks, Witherspoon looks so warm and sunny in yellow. We hope she never stops rocking it. 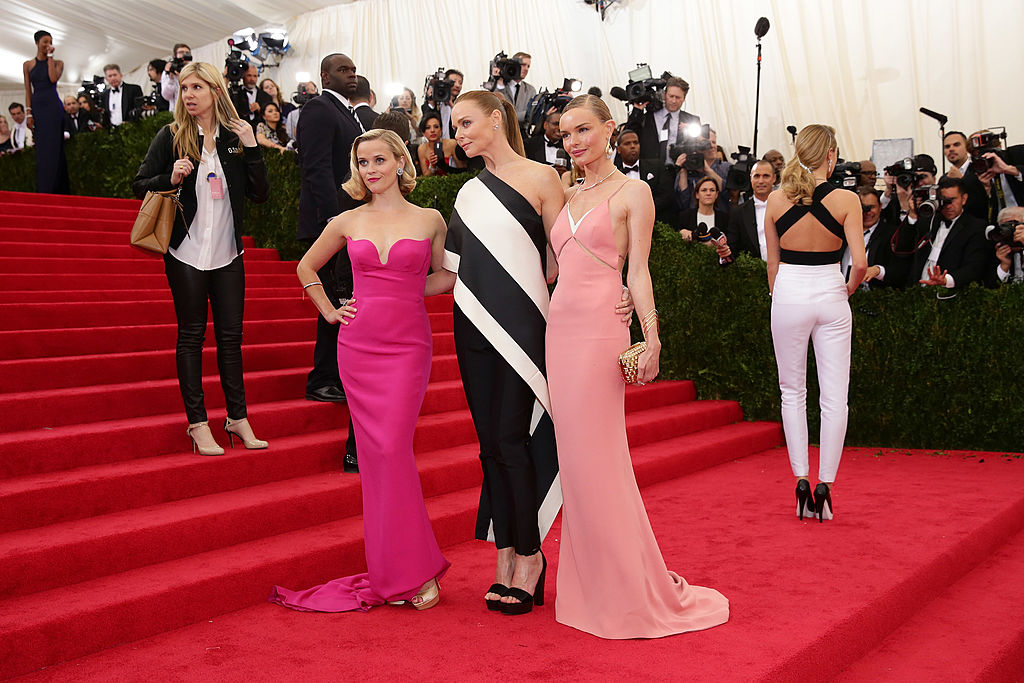 We can’t help but get major Legally Blonde flashbacks whenever we see Witherspoon in bright pink. The gown she wore to the Costume Institute Gala was particularly fabulous with its strapless, plunging neckline and sweeping train. Finished with dramatically curled hair, Witherspoon looked incredibly glamorous. Elle Woods and Bruiser would be so proud. 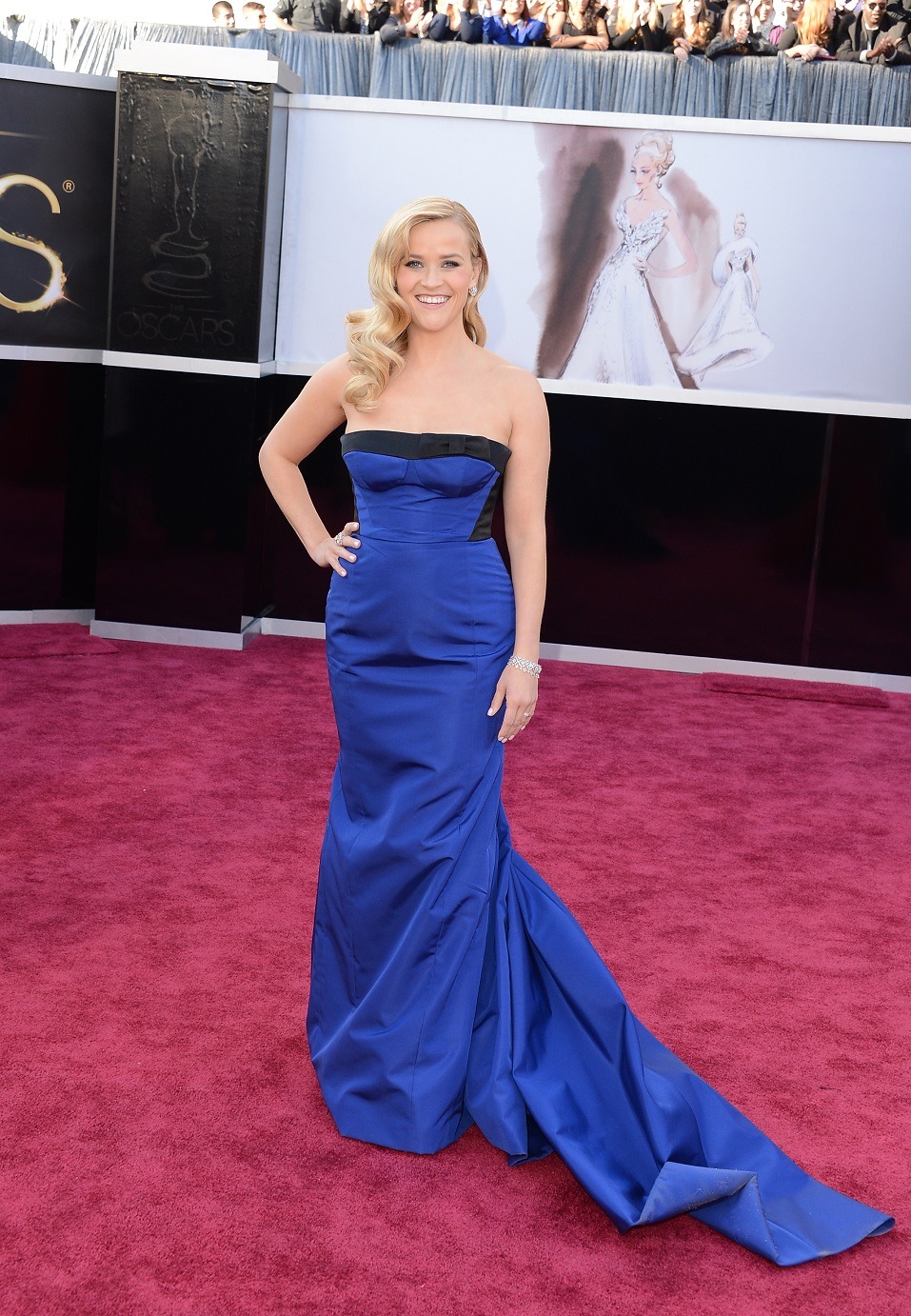 Blonds with blue eyes look incredible in royal blue, and Witherspoon proves it with this gown. The satin gown she wore to the Oscars in 2013 was a look for the books. We were blown away by the strapless corset top, black trim, and wrapped train. 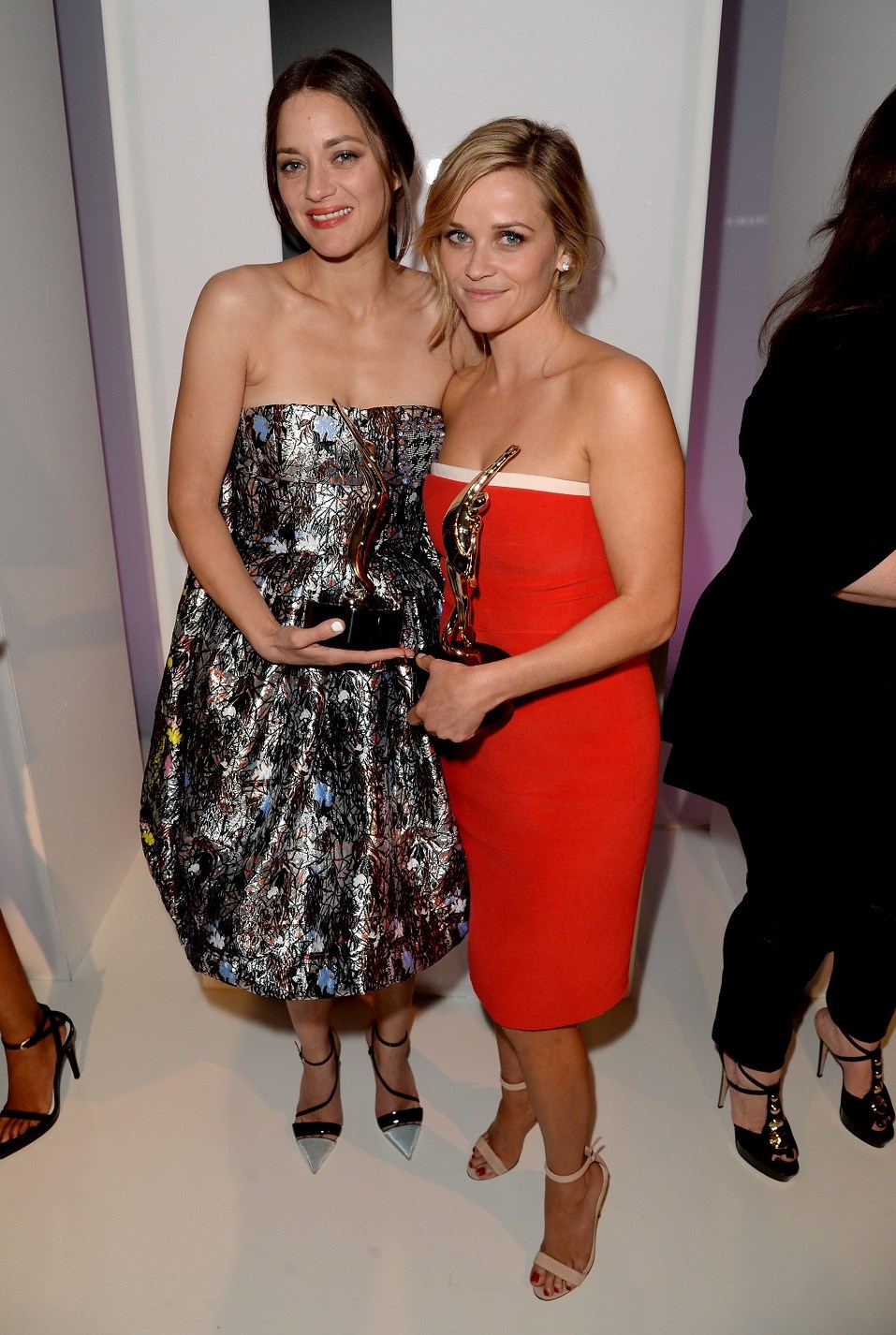 Witherspoon wore the tube dress of our dreams to the 20th Annual Elle Women in Hollywood Celebration. This gorgeous little red number isn’t just great for a Hollywood gala, either — it could also work perfectly for an outdoor lunch, a hot date, or a Christmas party. With her flawless tan and strappy nude heels, Witherspoon really showed how to effortlessly master bright colors. 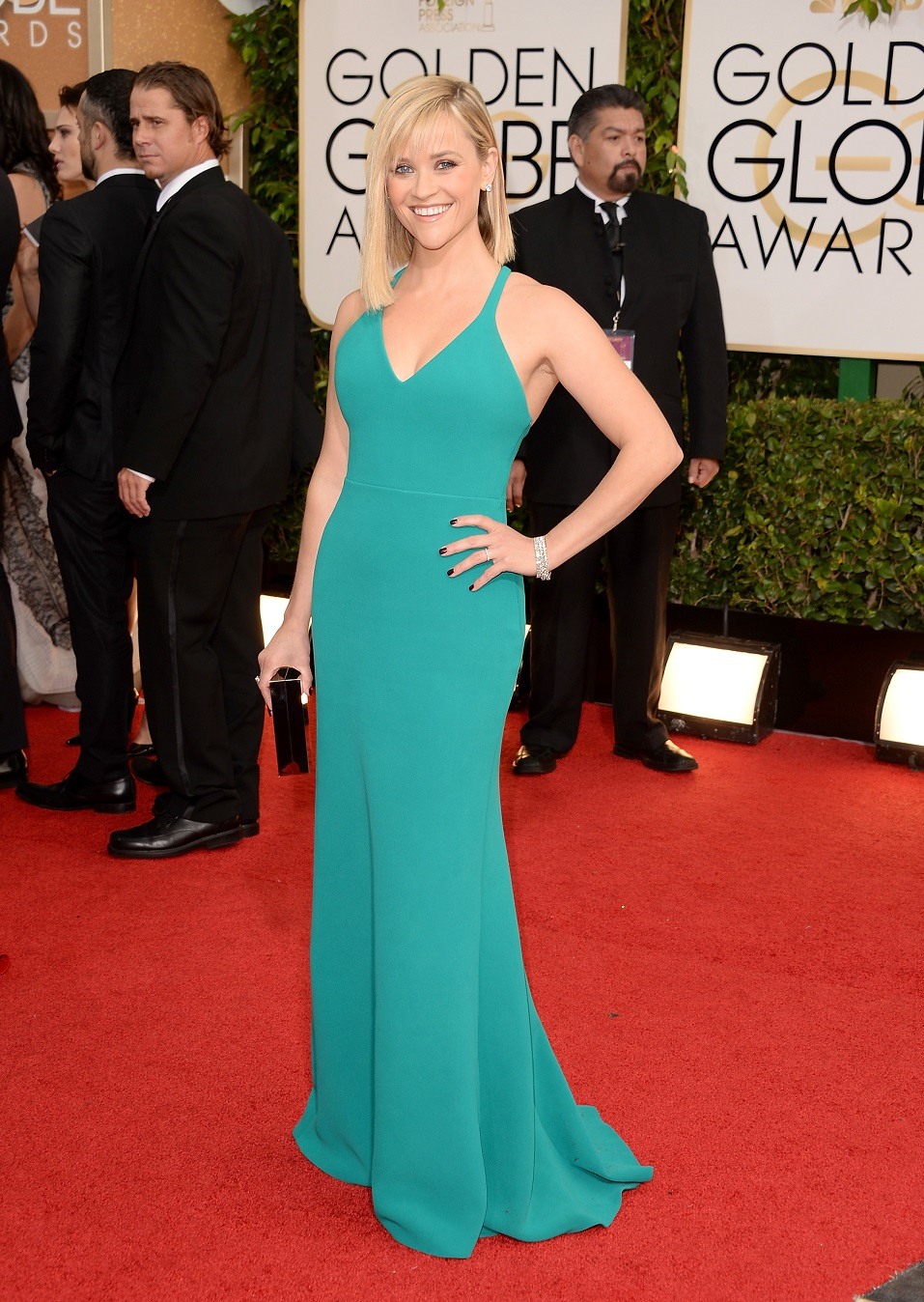 If Elsa from Frozen were ever in need of a dress for the Golden Globes, this would be it. Witherspoon pulled off this teal dress like no other. Complemented by her blond crop and silver clutch, she looked like a true ice princess. Also, notice she opted for showing off her fair complexion. The result was gorgeous.

6. Orange is the new black 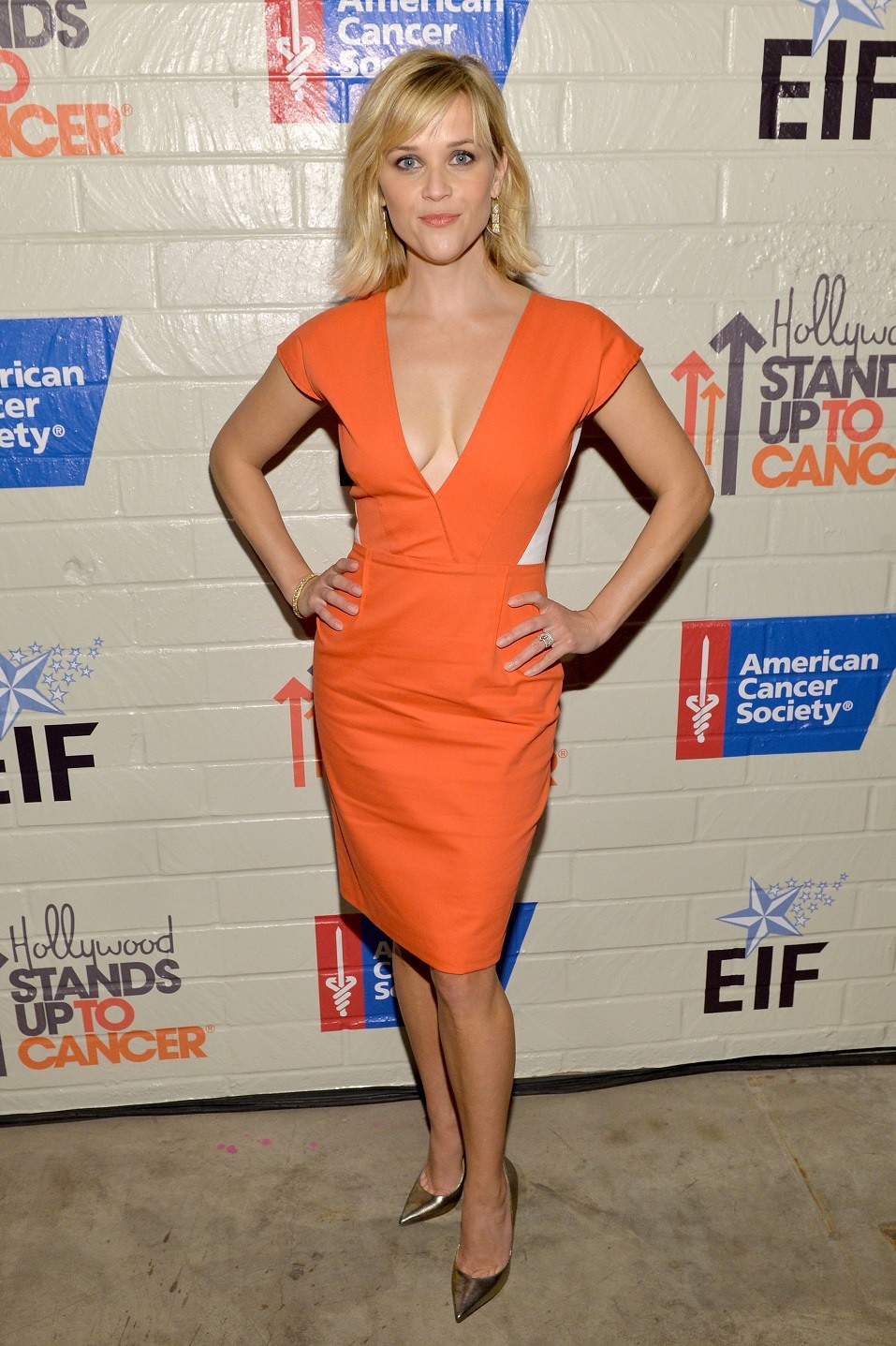 Elle Woods famously remarked, “Whoever said orange is the new pink is seriously disturbed,” but clearly Witherspoon can pull off the hue. If there’s one lesson she taught us here, it’s that this color only works on a dress with a feminine cut. Its tailored waist and plunging V-neck turn the attention away from the aggressive color and toward her incredible figure. And note that she matched the dress to her orange lipstick, then used a soft blush with coral undertones. 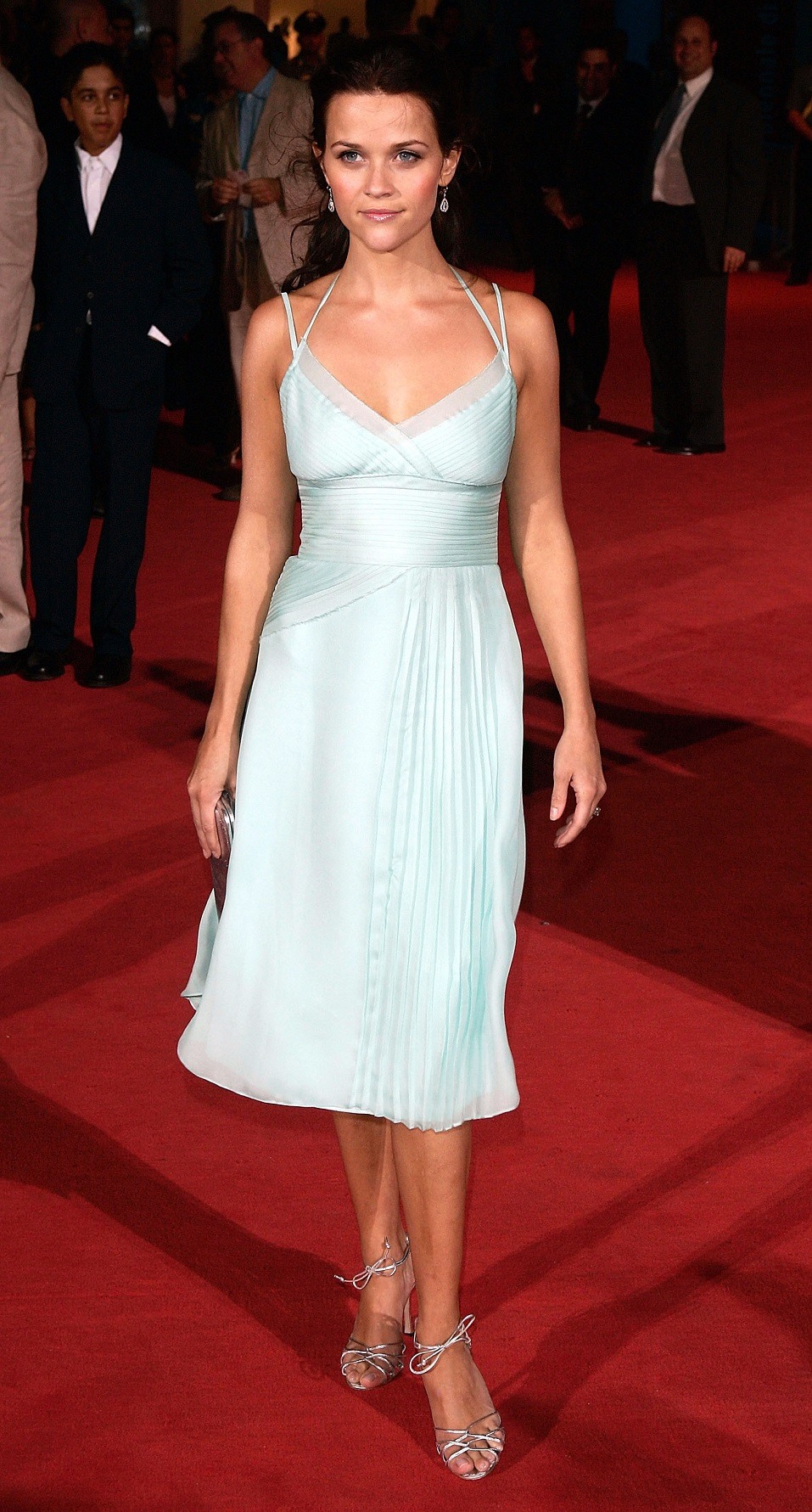 Witherspoon’s appearance at the 2004 Venice Film Festival stopped guests dead in their tracks. Who knew she’d look so gorgeous with dark brown locks? Witherspoon went from a blonde Southern belle to a brunette bombshell pretty easily. With her slightly tanner complexion, it made perfect sense for her stylist to reach for a mint green dress. Witherspoon is always wise about how her skin and hair needed to work with different colors. 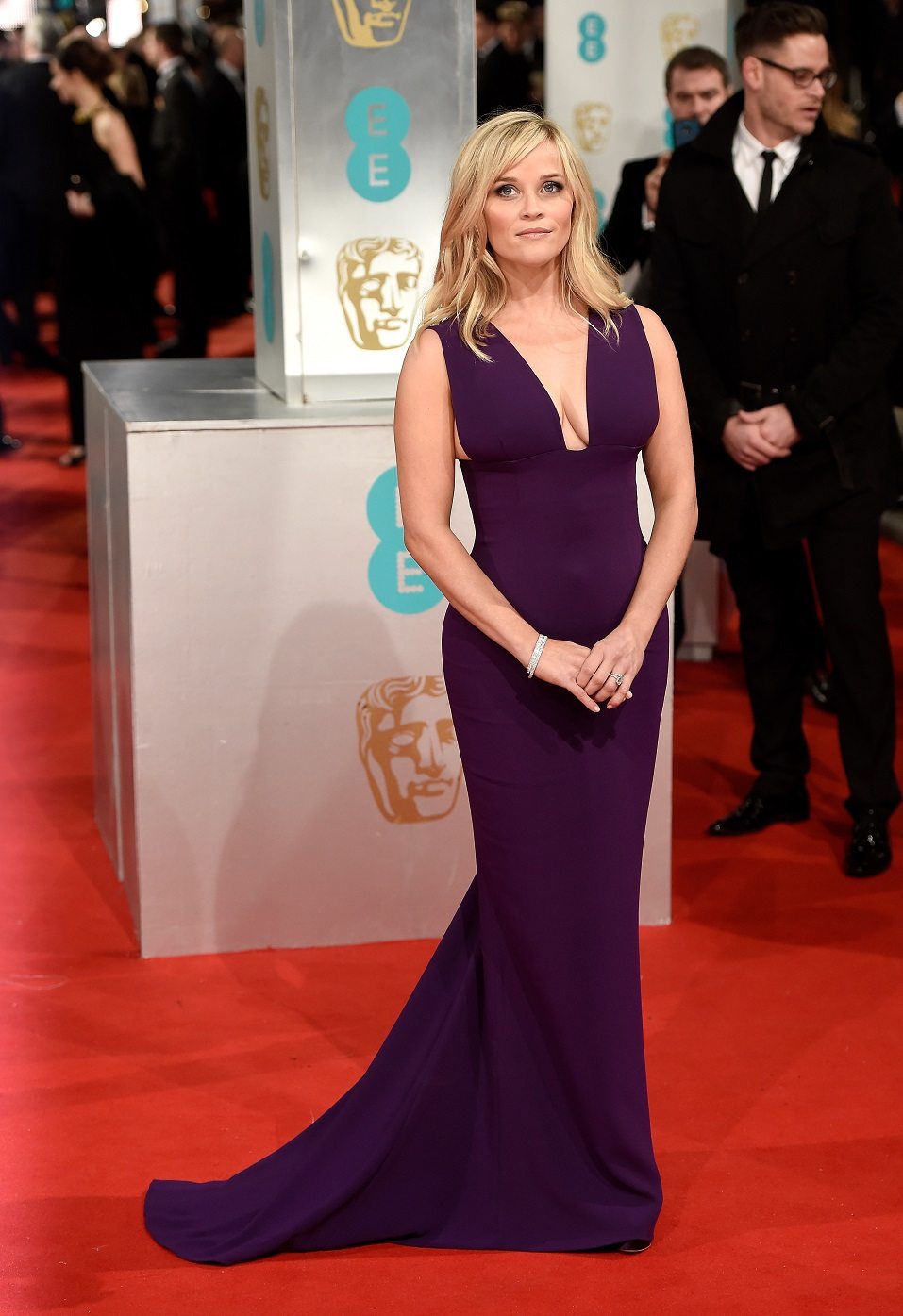 Purple is perhaps the trickiest color for a blonde to successfully wear, but Witherspoon somehow makes it work. Instead of looking like Barney at the 2015 British Academy Film Awards, she walked out like true royalty  — which is exactly what purple should convey.